One of four young people said to have died in drugs-related deaths in North East England over the weekend was today named as an 18-year-old first-year student.

An 18-year-old man was arrested on suspicion of supplying a Class B drug and bailed over the death of the teenager, who had only moved to Newcastle in August.

Miss Larmour is thought to have taken ketamine. Police investigating the four deaths in the city have now made ten arrests and carried out searches with drugs dogs.

Paramedics had rushed to Richardson Road in the city, where the Park View student village halls are located, early on Saturday morning. But Miss Larmour was found unconscious and pronounced dead at the scene, prompting a police investigation.

Drugs are believed to have played a part in all four deaths. Today, police continued interviewing students in the Derwent block and a patrol car was parked outside.

Detectives were today carrying out ‘consent-based’ room searches at student halls with drugs dogs, in collaboration with student wellbeing teams at the university.

Students said drugs were readily available through Snapchat and WhatsApp – and there were rumours of a rogue batch of pills being offered around the campus. 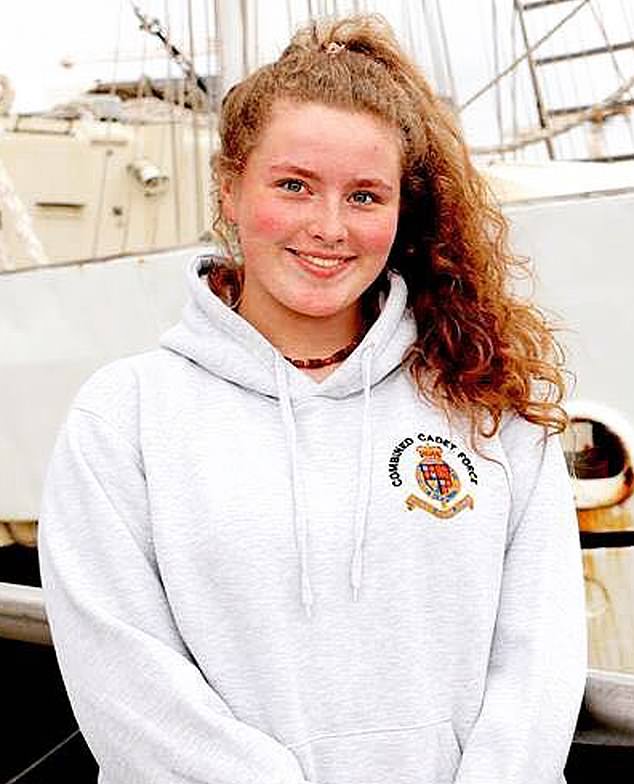 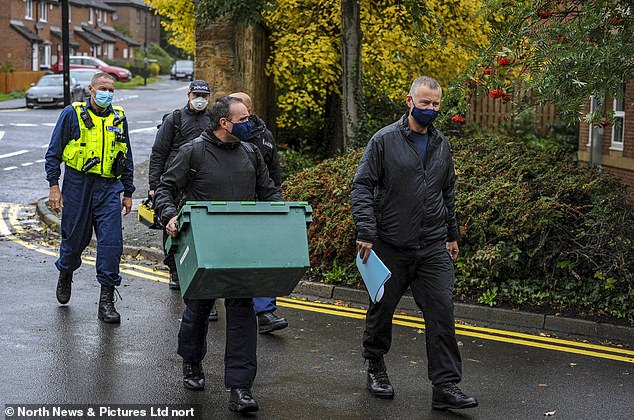 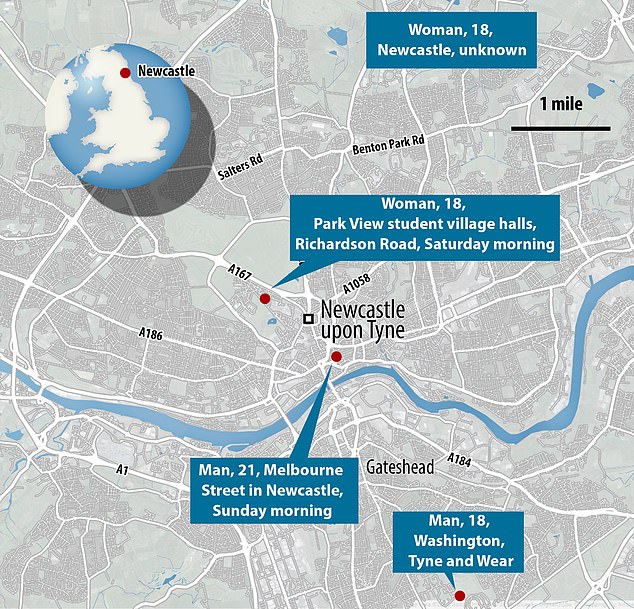 One student said the deaths had been his mother’s ‘worst fear’ as he headed off to Newcastle University last Friday.

The 18-year-old man said: ‘When the news began reporting the death at the halls my mum was straight on the phone very upset. I didn’t know the girl involved but she could only have been here a matter of days, I only arrived on Friday.

Saturday, 6.05am: Police received reports of an unresponsive woman at an address on Richardson Road in Newcastle. Jeni Larmour, 18, who was a student at Newcastle University, is believed to have taken a quantity of ketamine and was pronounced dead at the scene. An 18-year-old male was arrested on suspicion of supplying a Class B drug and has since been released on police bail.

Saturday, 3.50pm: Police are called to a report of a cardiac arrest at a property on Coach Road Estate in Washington, where an 18-year-old had allegedly taken a quantity of MDMA and fallen ill. Officers and emergency services attended but the man, who is not a university student, was pronounced dead a short time after. Seven people were arrested in connection with this incident and have been released under investigation.

Sunday, 8.13am: Police were alerted to a report that a 21-year-old student from Northumbria University had taken ill at an address on Melbourne Street, Newcastle. It is suspected he had taken a quantity of MDMA. He was transported to hospital, but died a short time later. A 20-year-old male arrested on suspicion of supplying Class A drugs has since been released on police bail.

Sunday, 1.10pm: Police received a further call to the same building on Richardson Road, where the first woman was found. Another 18-year-old student had died, and it is believed ketamine had been present at the address. An 18-year-old man was arrested on suspicion of supplying a controlled drug and has been bailed.

‘I left with warnings from my mum and dad about this exact situation. This was my mum’s worst fear, and there’s been a real feeling of shock around the halls ever since, the atmosphere is very subdued.’

An 18-year-old female student from a neighbouring block said: ‘I’ve seen a video of the guy being arrested outside Block Three after the girl was found unresponsive in the flat she shared.

‘The word around the student village is that a bad batch of pills has been offered around and some people have got hold of them. Lockdown hasn’t helped the situation.

‘The pubs close at 10pm and people have been going back to their flat in halls to continue the party, which is what I heard happened here.

‘At least one of the others who died are also students. We’re not having what would be a normal freshers’ experience and some people are compensating for that.

‘It’s so sad and I feel really bad for her parents. I haven’t sought out or been offered drugs but I know they’d be easy to come by, I’ve heard people are buying them through Snapchat and WhatsApp.

Northumbria Police chief Inspector Steve Wykes said: ‘This weekend we have seen the tragic loss of four young lives and our thoughts continue to be with the family and friends of those who have sadly died.

‘Although our investigations are at an early stage and we continue to establish the circumstances around these tragedies, we want to reiterate our warning to people against taking drugs for recreational use. The consequences could cost you your life.

‘We will continue to work with both universities and will be increasing our patrols in the areas where these tragedies have occurred.’

He added: ‘We would urge anyone with any information in relation to these tragedies to come forward – even the smallest piece of information could help us.

‘If anyone has any information about who has supplied the drugs in question then we would also encourage them to contact us at the earliest opportunity.’ 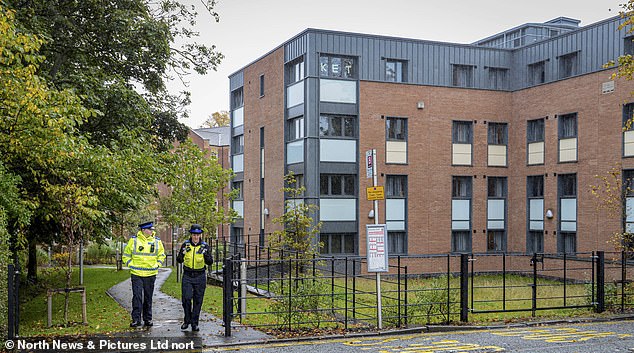 Police at student accommodation on the Richardson Road area of Newcastle this morning, two days after paramedics rushed to the halls on Saturday morning 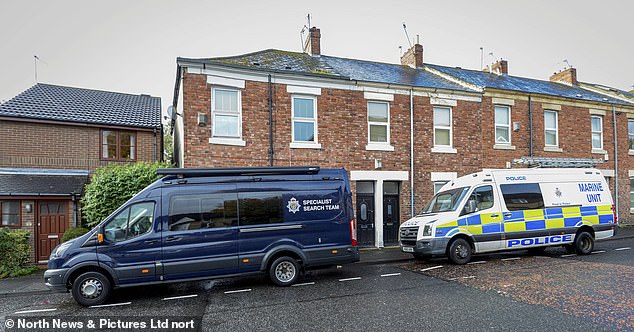 A Newcastle University spokesman said: ‘We are shocked and saddened to learn of the death of one of our students and our welfare teams are offering support to those affected.

‘This is not Covid-related and as this is an active police investigation, we are unable to provide further comment at this time.’

Yesterday morning a 21-year-old man was taken ill at an address on Melbourne Street in Newcastle, and later died in hospital.

A Northumbria Police spokesman said: ‘At 8.13am (yesterday) police were informed by the ambulance service that a man had taken ill at an address in Melbourne Street in Newcastle.

‘Emergency services attended but sadly the man – aged 21 – was later pronounced dead at hospital. Enquiries into the circumstances around his death are ongoing. 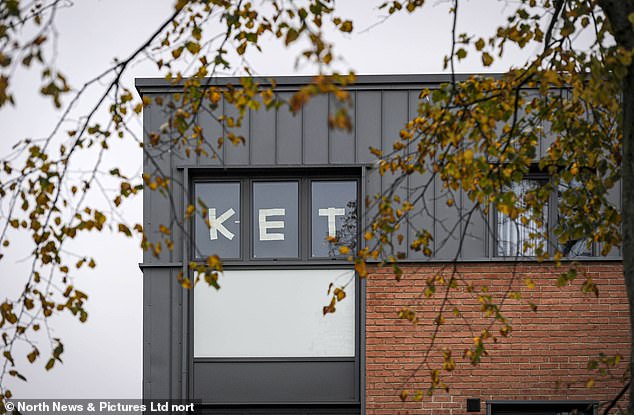 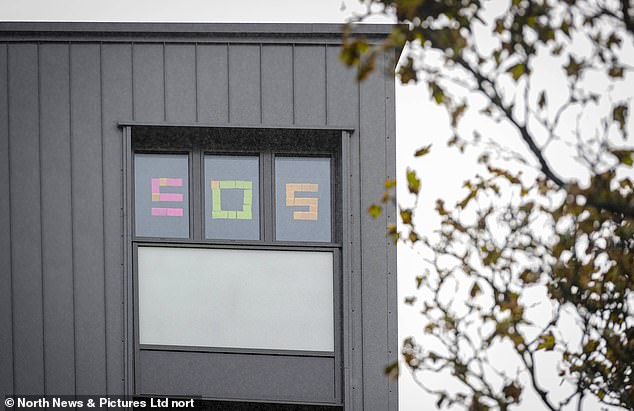 ‘His next of kin have been informed and are being supported by specialist officers at this time. The investigation is at an early stage but this is not believed to be Covid-19 related death.’

Newcastle University vice-chancellor Chris Day issued an email warning to students, saying: ‘I know how different the start of this term has been and that it is exciting to be back at university with your friends after the last six months. But your safety is in your hands.

‘If you drink, then make sure you do so sensibly and that you look after each other. Remember, it is against the law to take and supply drugs and it is also extremely dangerous.

‘Batches of drugs can vary in purity and strength and are potentially lethal, and mixing drugs with alcohol further increases this risk.’

Video .. A huge fire destroys more than 250 huts in the favela of Rio de Janeiro

Up or down? Dash (DASH) price prediction for November

The price of Chainlink (LINK) recently skyrocketed to a brand-new all-time high at $22.06. The coin...