Piers Corbyn revealed there will be ‘another drink against the curfew’ tonight as he arrived at court charged with breaking Covid rules.

The brother of former Labour party leader Jeremy Corbyn claimed someone would ‘be blowing fire’ and ‘juggling’ at an event in London on Friday night.

He told supporters outside Westminster Magistrates’ Court: ‘Just to let you know that tonight, in a place as yet unrealised, but if you go on Twitter you’ll find out, we’re going to have another drink against the curfew – where allegedly someone’s going to be blowing fire.’

Corbyn, 73, last appeared at a ‘drink against the curfew’ on October 17, when he shook revelers hands, blasted the Government and said ‘there’s no such thing as a coronavirus‘.

He was singled out for breaking Covid regulations during a lockdown protest because of his political beliefs, his lawyer claimed in court today. 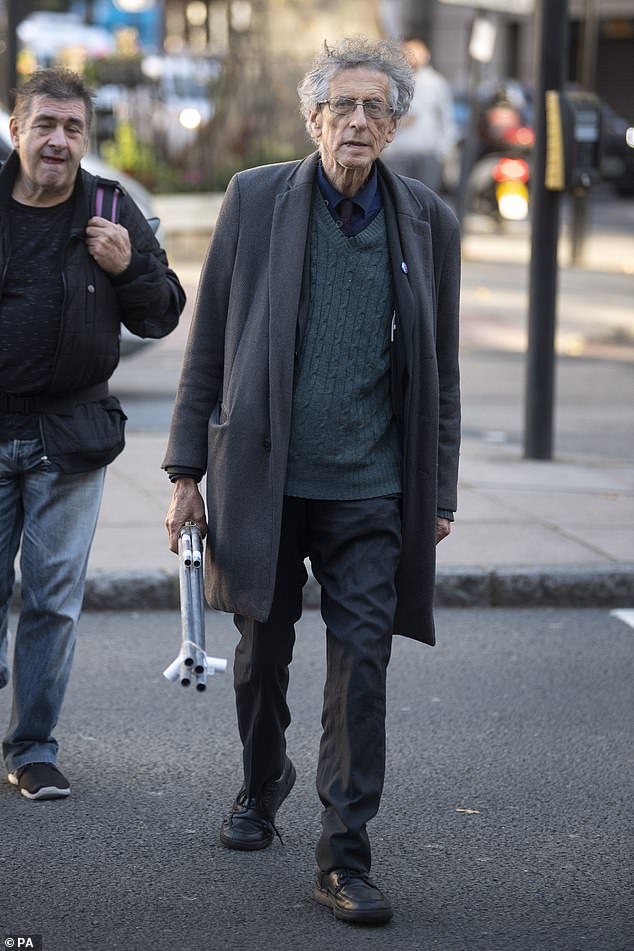 Westminster Magistrates’ Court was told that Corbyn was ‘specifically targeted’ and accused the Met Police of ‘politicisation of the regulations’ and ‘entering the political arena impermissibly.’

His barrister suggested it was unfair that the conspiracy theorist was arrested at a Hyde Park demo on May 30 while no arrests were made for breaches of lockdown restrictions at a Black Lives Matter (BLM) protest taking place on the same day.

Ben Cooper QC, representing the former Labour leader’s brother, said: ‘We see that these are incidents in which there was an awareness of the politics of protesters by police.

‘So when we adduce that the BLM protest on the same date resulted in no arrests, notwithstanding similar breaches had taken place, this demonstrates that there is a politicisation in the enforcement of the regulations by choosing to permit one set of demonstrators to protest while discriminating against different groups on the same day.

‘That is an example of the police entering the political arena impermissibly.’

He added that some police evidence highlighted officers’ awareness of who Corbyn was, going against other evidence said to suggest approaching Corbyn was unplanned.

Referring to a log of police activities, named Silver Log, set to be used as evidence in the trial, he added: ‘The Superintendent in charge of Silver Log showed specific awareness of Mr Piers Corbyn – specifically described as Jeremy Corbyn’s brother in the entry on his activities – and therefore he was clearly very much on the radar of the officer responsible for the policing of these matters. 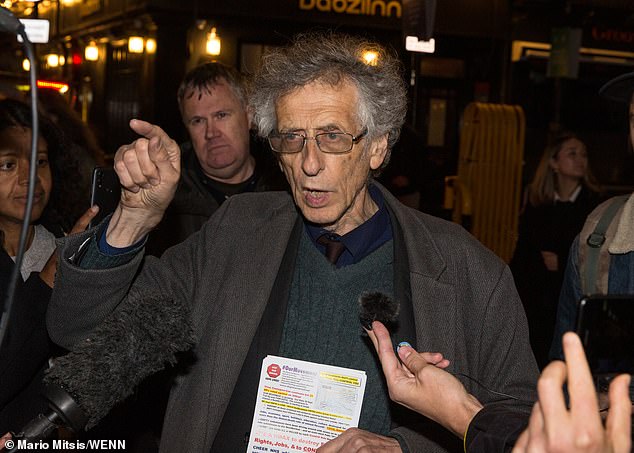 Last Saturday night, after being turfed out of pubs and bars at 10pm, crowds spilled on to the streets of Soho where anti-lockdown demonstrators had gathered, including Piers Corbyn who said: ‘We’re here to drink against curfew’

‘That is contrary to subsequent evidence of something which effectively suggests there was an element of surprise in confronting Mr Cobryn.’

Corbyn denies two counts of participating in a gathering in public of more than two people in England during the coronavirus emergency period.

The trial, which was due to start this morning, was delayed when a judge was told the CPS lawyers had not had time to go over police records which could be used as evidence because they were only uploaded to a document sharing system this week.

The court also heard that Corbyn’s defence lawyers were late in delivering statements.

Judge Sam Coozee said: ‘These delays are abhorrent. If I have to adjourn the trial because of outstanding disclosure I will have to consider the issue of costs.’

Corbyn sat on a seat in front of the dock wearing a dark blue shirt, red tie, and black trousers. 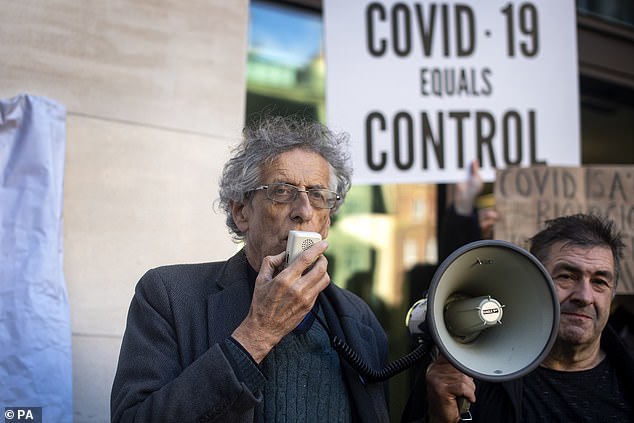 The public gallery was at full capacity with his supporters while uniformed police stood at the door of the court room to stop yet more fans and associates from entering the court room so it could comply with social distancing regulations.

During recesses in the hearing, the amateur weather forecaster went into the public gallery, ignoring social distancing rules. He appeared to nod off and was told off after his mobile phone went off three times in court.

A new trial date has now been set for November 27 at the same court.

Before the hearing began Piers Corbyn told reporters outside court he would refuse to pay a fine if found guilty.

He added: ‘If we win today, this will set a precedent for all other people arrested under the Covid regulations.

‘If we lose, we will appeal. Whatever happens, if they impose a fine, I will not pay the fine. I’m not going to pay any fines for these anti-just, illegal laws.’ 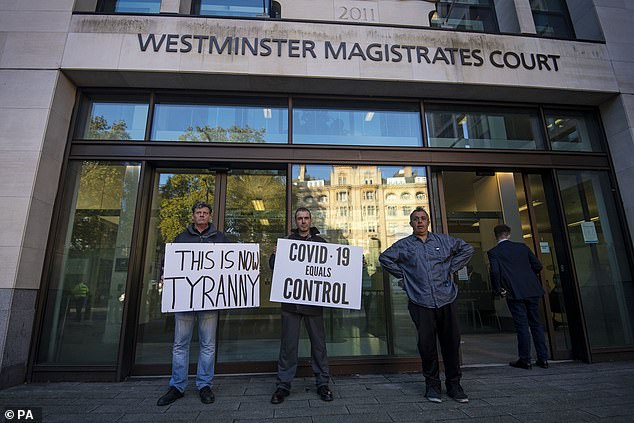 A second man, Jeffrey Wyatt, 56, of Watery Lane, Milton Keynes, Bucks, was due to stand trial alongside Corbyn after being arrested at Speakers Corner during the same incident on May 16.

Addressing District Judge Goozee, Wyatt appeared to make reference to a fringe belief that all British People were declared dead at sea by the obscure Cestui Que Vie Act 1666 – which conspiracy theorists believe left everyone as a ‘legal fiction.’

The act was actually designed to allow landlords to recover what was owed to them by tenants who went missing overseas for seven years or more by declaring them dead.

The act gave those declared dead the power to regain their estate and claim damages if they returned alive.

He said: ‘I am here in peace to clarify matters because I do not recognise the jurisdiction of this court.

‘I don’t recognise the jurisdiction of this court. I think this is very important. I am here to clarify the process of the legal action that Jeffrey Wyatt is facing and I’m here as the living man Jeffrey Wyatt.’

He added that he did ‘own the legal fiction that is Jeffrey Wyatt’, but he appeared before the court as the ‘living man’ of the same name.’

He told the court he intended to call a John Smith, who he described as an expert on common law, as a witness.

‘My time is now!’: Rhian Brewster ready for Liverpool return with Sheffield United

When you purchase by our links, Insider may well receive an affiliate commission. Master more. "Important Other," a new horror thriller from Paramount, is now out there to...

INTRODUCTION  The idea of “healthy eating” is attaining momentum each and every working day. A lot of persons are now conscious of what they try to eat and...

Tesla Will not Prevent Falling Till Musk Stops Offering. Here’s Where by the Inventory Is Headed.

Tesla stock has been acquiring a terrible 7 days, and it’s very likely to get worse for the shares before it gets better. There are a couple good...

'My time is now!': Rhian Brewster ready for Liverpool return with Sheffield United