Piers Morgan says he was right not to believe Meghan Markle and Prince Harry in their bombshell interview with Oprah Winfrey last month because 17 of their claims have since been proven false, exaggerated or unverifiable.

Morgan, DailyMail.com’s editor-at-large, sat down for his own tell-all with Fox News host Tucker Carlson aired Monday, where he vowed to reveal ‘MY truth’ about the controversy surrounding his criticism of Meghan and Harry that led to his departure from Good Morning Britain.

Morgan set off a social media firestorm the day after the Oprah interview on March 7 when he said he ‘didn’t believe a word’ of what Meghan said – particularly about experiencing racism within the Royal Family and feeling suicidal when she was pregnant with son Archie.

Speaking to Carlson on his Fox Nation show on Monday, Morgan doubled down on his original comments.

‘What I was witnessing was the most extraordinarily disingenuous smear, hit job, on the Royal family, on the Queen, on the monarchy, and frankly on Britain, my country,’ he said.

‘I went on air on Monday morning with full bells on and said quite clearly that I didn’t believe what Meghan Markle was saying. Here we are a month later and frankly, I’ve had plenty of time to think about this – I still don’t believe any of what they were saying.

‘Seventeen different claims by the pair of them have now been proven to be either completely untrue, or massively exaggerated, or unprovable. I don’t understand why I should have to believe people who are not telling the truth.’

In the Oprah interview Meghan had claimed that she was denied access to mental health care when she was feeling suicidal because she was told it ‘wouldn’t look good for the institution’. Morgan on Monday demanded that the duchess substantiate that claim by revealing who allegedly denied her care.

‘You’re accusing two people in the palace of being unspeakably cruel simply to protect the brand of the Royal family, if that is true let’s have the names of these people and let’s go to them and ask them is this true,’ he said.

‘”Did you tell a suicidal woman, who told you she was suicidal, not to get help?” – because I find that impossible to believe.’ 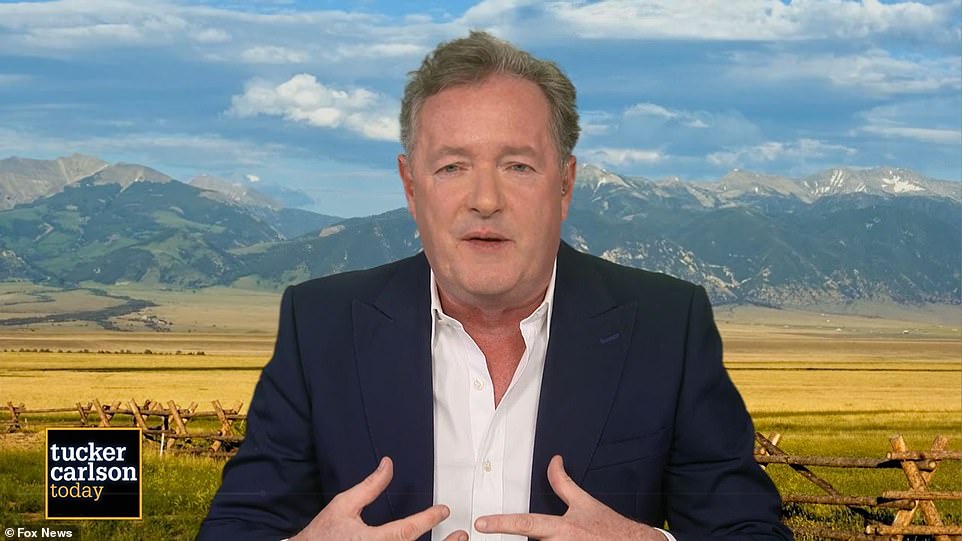 Piers Morgan has declared that he was right not to believe Meghan Markle and Prince Harry in their tell-all interview with Oprah Winfrey last month because 17 of their claims have since been proven false, exaggerated or unverifiable 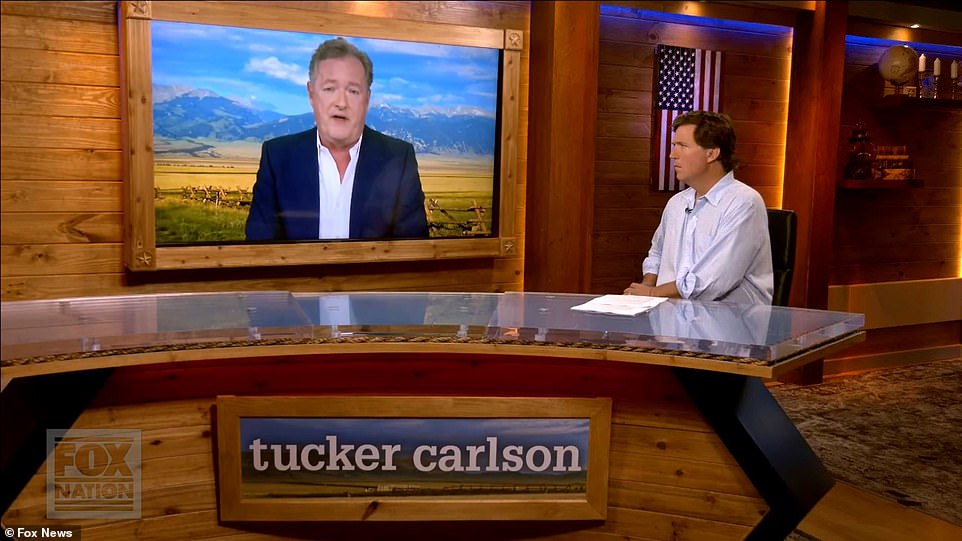 Morgan sat down for his own tell-all with Fox News host Tucker Carlson aired Monday, where he vowed to reveal ‘MY truth’ about the controversy surrounding his criticism of Meghan and Harry that led to his departure from Good Morning Britain 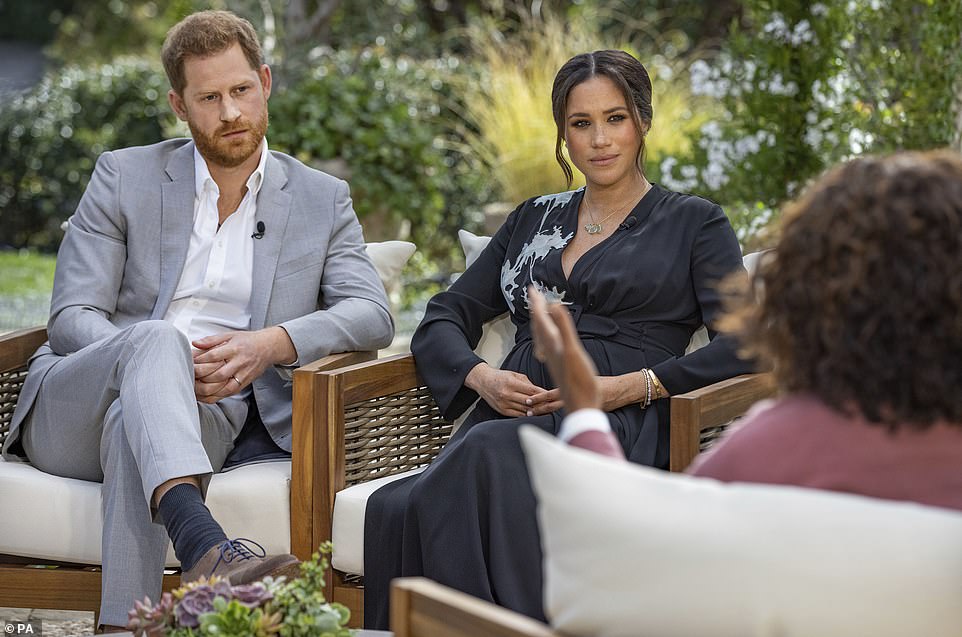 Morgan also took aim at the racism allegations and reminded that Harry himself was forced to apologize after using a racial slur against a Pakistani army officer in 2006.

Speaking to Oprah, Meghan alleged that someone in ‘The Firm’ expressed ‘concerns’ about ‘how dark’ Archie’s skin would be before he was born because she is mixed-race and Harry is white.

Morgan asserted that Meghan was ‘accusing the Queen and the Monarchy and the institution as being racist’ – adding: ‘We don’t know the context, we don’t know what was said.’

Morgan said the question about Archie’s skin color could have been ‘innocent’ if it was based on mere curiosity. He acknowledged, however, that if the question were ‘loaded with a sense of derogatory tone or concern, then it becomes racism’.

He further said that Meghan’s suggestion that Archie was barred from becoming a prince because of concerns about his skin color was ‘completely untrue’.

‘It’s not just a sense of her lived experience being untrue, it is factually incorrect. That boy was never going to be a prince until Prince Charles, Harry’s father, becomes king on the death of the Queen,’ Morgan said.

‘And that’s gonna happen whatever the skin color of Archie’s mother, that’s set-in-stone – it’s been the case for 100 years.

‘So for Meghan Markle to try and create a story that says that the decision to not make Archie the title of prince was based on his skin color is a lie.’

Morgan said he couldn’t be sure whether Meghan was ‘deliberately lying’ or ‘completely untrue’ – but said he does not care.

‘It’s not really about Meghan Markle -she’s a delusional duchess who wants to make millions off the royals while trashing family – It’s really about free speech,’ he said.

‘What happened to me is happening all over Britain and America – I can take it, but there are many people who don’t have our platform who are being wiped out, lives destroyed, careers ended for ridiculous things.’

Confirming the news of his interview with Carlson on his Twitter account on Saturday, Piers wrote: ‘Time for America to hear MY truth….’

In another update shared on Friday evening, Piers poked fun at Meghan, 39, as he referenced the moment when Oprah, 67, asked whether she was ‘silent or silenced?’ to which the wife of Prince Harry, 36, accused the Royal establishment of ‘silencing’ her.

Casting doubt over the authenticity of her accusations once more, Piers used Oprah’s question to make light of his GMB exit.

‘Time for America to hear MY truth’: The journalist will unpack the events leading up to his dramatic departure in his first tell-all interview as he confirmed to Twitter on Saturday 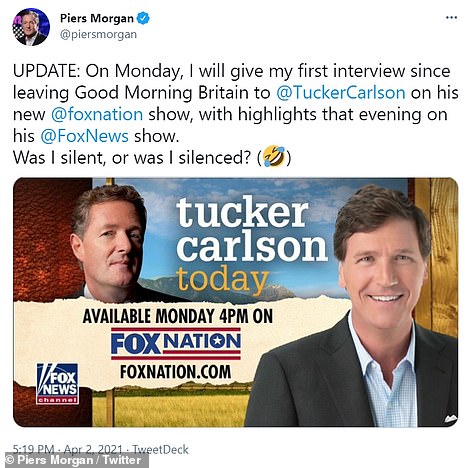 Revealing: In another update shared on Friday evening, Piers poked fun at Meghan, 39, as he referenced the moment when Oprah, 67, asked whether she was ‘silent or silenced?’ to which the wife of Prince Harry, 36, accused the Royal establishment of ‘silencing’ her

He jested: ‘UPDATE: On Monday, I will give my first interview since leaving Good Morning Britain to @TuckerCarlson on his new @foxnation show, with highlights that evening on his @FoxNews show.

‘Was I silent, or was I silenced? (crying laughing emoji).’

Carlson, 51, also confirmed the news to social media as he shared an exclusive clip from the interview and said: ‘So, Piers Morgan was banished from television for asking a simple question, how is it that the most privileged people in our society get away with posing as the most oppressed?

‘For asking that they crushed him – they took his job away. On Monday we will speak to Piers Morgan for his first wide-ranging on-camera interview since he was cancelled.’

Morgan resigned from GMB on March 9 – a day after he stormed off set during an on-air row with weatherman Alex Beresford, who criticized him for ‘continuing to trash’ the Duchess of Sussex. 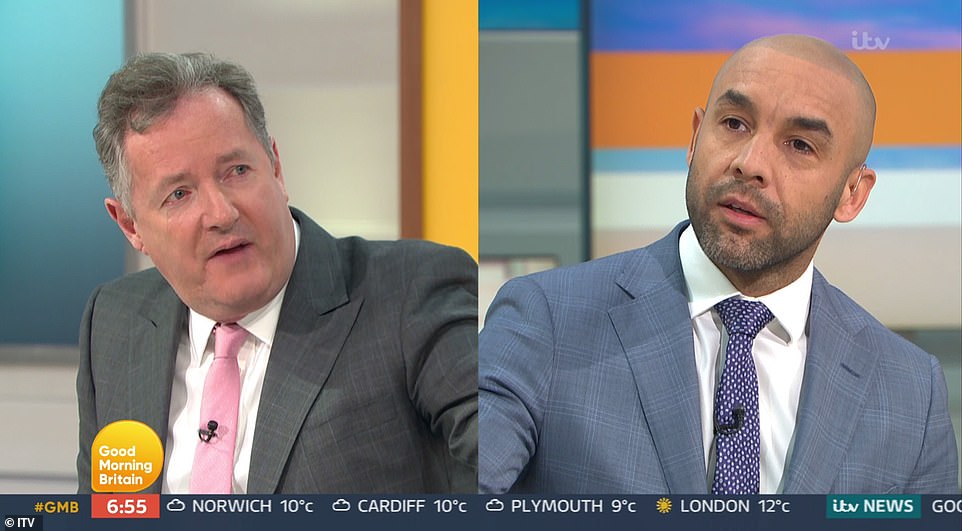 ‘And now I’ve lost my job at Good Morning Britain because I chose not to apologise for disbelieving Meghan Markle’s claims in her interview with Oprah Winfrey.’

Sources at ITV have said that Morgan ‘will continue to make programmes for the channel’, according to iNews.

This is likely to include his popular celebrity interview program, Life Stories, which has been on air since 2009.

Since Piers’ exit from the show he has received messages from several stars, naming Jeremy Clarkson and Bear Grylls, who have said he had a ‘right’ to say his mind.

Sharon Osbourne also voiced her support for Piers during an appearance on The Talk, though she has since parted ways with the CBS show.