A UK observatory has shared what’s believed to be the longest-exposure image ever taken, lasting longer than eight years.

But the image, shot at the University of Hertfordshire’s Bayfordbury Observatory, wasn’t made with any high-tech photo equipment.

Regina Valkenborgh, a graduate art student at the college at the time, just used a simple pinhole camera made out of an empty beer can and some photographic paper.

The dome of Bayfordbury’s oldest telescope is visible on the left of the photo while an atmospheric gantry, a structure built halfway through the exposure process, can be seen toward the right.

Regina Valkenborgh’s pinhole camera was left untouched at the University of Hertfordshire’s Bayfordbury Observatory for eight years and one month,. Each of the 2,953 trails in her photo represents the arc of the sun as it rose and set

Valkenborgh had been experimenting with pinhole camera techniques while getting her Master of Fine Arts (MFA) at Hertfordshire.

A pinhole camera, in essence, is just a light-proof box with a tiny hole in one side that allows sunlight in.

Because of a natural phenomenon called the camera obscura effect, light from the outside passes through the tiny ‘pinhole’ and projects an inverted image of what’s outside on the opposite side of the box.

The effect has been known for more than 1,000 years, having been described by Arab physicist Ibn al-Haytham in the 10th century. 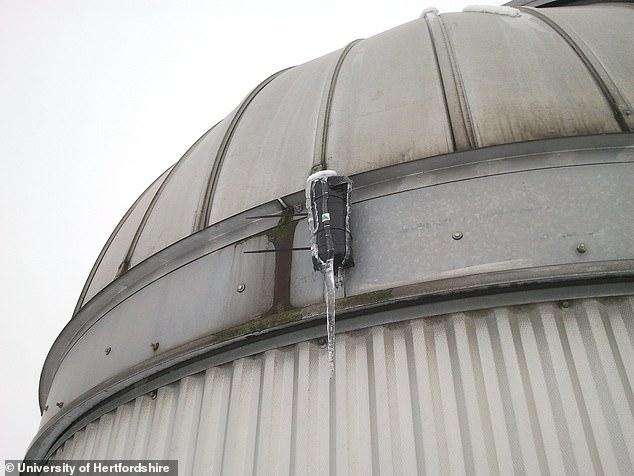 Back in 2012, Valkenborgh placed a beer can lined up with photographic paper on one of the observatory’s telescopes

When photographic paper was developed in the 19th century, images captured using camera obscura could be turned into photographs.

‘To me the most exciting thing is that this rudimentary way of photographing in this technology-driven era still has value,’ Valkenborgh told Motherboard.

‘Yet in all its simplicity it has the capability of ‘capturing’ a photograph way beyond the slowest shutter speed you can set on any digital camera.’

‘The images are also totally unique, the light photons travel through the actual pinhole and touch the paper inside the can.’ 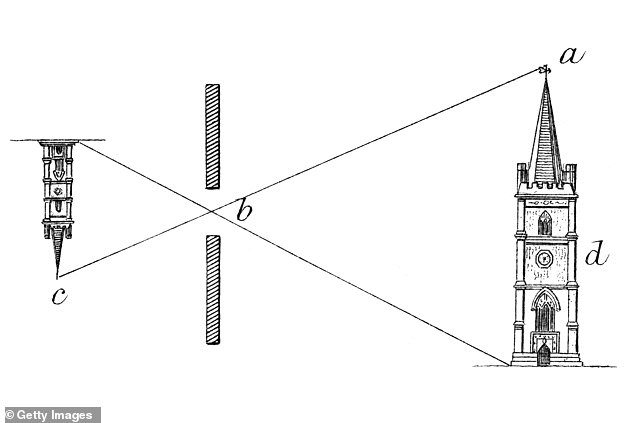 Because of the ‘camera obscura’ effect, light passing through a tiny ‘pinhole’ in a light-proof box will projects an inverted image of what’s outside on the opposite side of the box 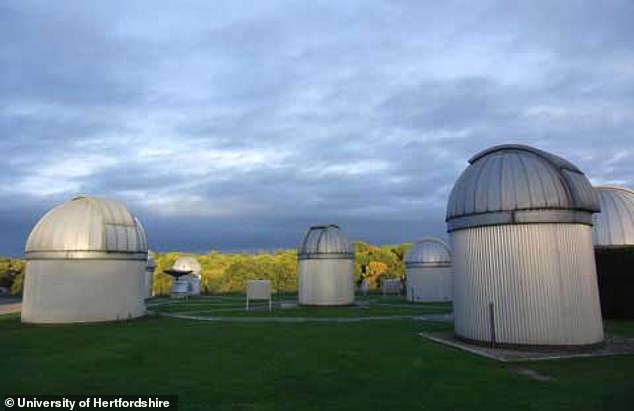 Telescopes at the University of Hertfordshire’s Bayfordbury Observatory. The dome of Bayfordbury’s oldest telescope is visible in Valkenborgh’s photo

Back in 2012, Valkenborgh placed a beer can lined up with photographic paper on one of the observatory’s telescopes.

The endeavor was largely forgotten until this September, when observatory staffer David Campbell rediscovered it.

‘It was a stroke of luck that the picture was left untouched, to be saved by David after all these years,’ said Valkenbourgh, now a photography technician at Barnet and Southgate College.

Most of her attempts at pinhole photography were ruined by moisture causing the photographic paper to curl up.

‘I hadn’t intended to capture an exposure for this length of time and to my surprise, it had survived,’ she said. ‘It could be one of, if not the, longest exposures in existence.’

Super-Long exposure photography is something of an artform: In 2011, retired physicist Greg Parker used a pinhole camera made from an old tea box to capture the sky from June 21, the summer solstice, to December 22, the winter solstice.

Valkenborgh did the same thing to record the sky above the observatory during the same timeframe in 2011.

‘Dark gaps in the daily arcs are caused by cloud cover, whereas continuous bright tracks record glorious spells of sunny weather,’ she explained of the image, called a solargraph. ‘Of course, in June, the Sun trails begin higher at the northern hemisphere’s summer solstice. The trails sink lower in the sky as December’s winter solstice approaches.’

Fall 2011 was one of the sunniest in UK history, she added, as evidenced by the many bright arcs in the lower part of her picture. 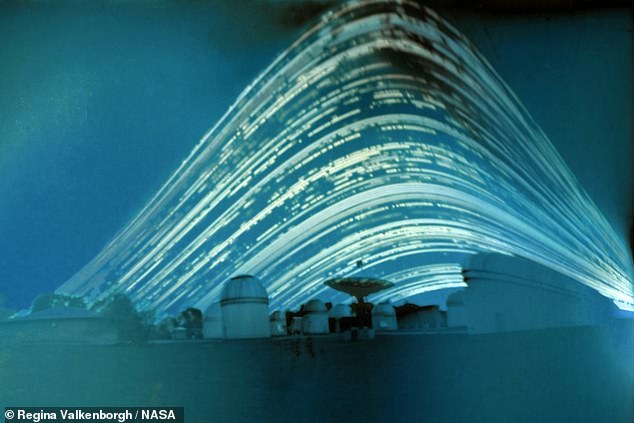 In 2011, Valkenborgh used a pinhole camera to record the sky above the observatory for six months, from the summer to winter solstice. ‘Dark gaps in the daily arcs are caused by cloud cover, whereas continuous bright tracks record glorious spells of sunny weather,’ she said

According to the university, German artist Michael Wesely is the previous record holder for the longest exposure image, with a photo taken over four years and eight months.

Valkenborgh’s record may not last forever: In 2015, conceptual artist Jonathon Keats announced plans to take a photograph with a 1,000-year exposure to chronicle a millennium of climate change on a western Massachusetts’ Holyoke mountain range.

Small enough to hold in the palm of your hand, Keats’ ‘millennium camera’ is made of copper in order to survive the ravages of time.

He hopes the project encourages people to think beyond their own human lifespan to what geologists call ‘deep time,’ the lengthy periods in which the world changes on a grand scale.

His camera was placed on Amherst College’s Stearns Steeple and the university has agreed to exhibit the resultant image at the Mead Art Museum in 3015.

The Book of Joy: Lasting Happiness in a Changing World

Kingdom Come: Deliverance Being Developed as Live-Action Series or Film