Pink Floyd’s David Gilmour has become embroiled in a row over his neighbour’s plan to chop down a cherry tree as residents say it is the ‘last piece of nature’ next to his ‘overbearing’ seafront mansion.

Gilmour and his wife, Polly Samson, purchased derelict 19th century Turkish bathhouse Medina House in 2015, before demolishing it in 2018 and building a huge 15-bedroom home on the Hove seafront.

Some locals claim the £2.5million mansion has become overbearing and created an ‘oppressive sense of enclosure.’

They claim the final remnant of nature in the area is a cherry tree that attracts an array of birds and wildlife.

But the owners of the cherry tree on Sussex Road have applied to have it removed, as they complain of ‘fruit frequently falling to the ground’.

Another neighbour, Neil Williams, 56, said: ‘There are constantly 30/40 birds in the tree and the amount of birdsong is a massive relief from the overdevelopment of the area and given people a sense of escape.’

Other objectors say the tree helps to prevent a ‘sense of enclosure,’ brought on by the development of Medina House. 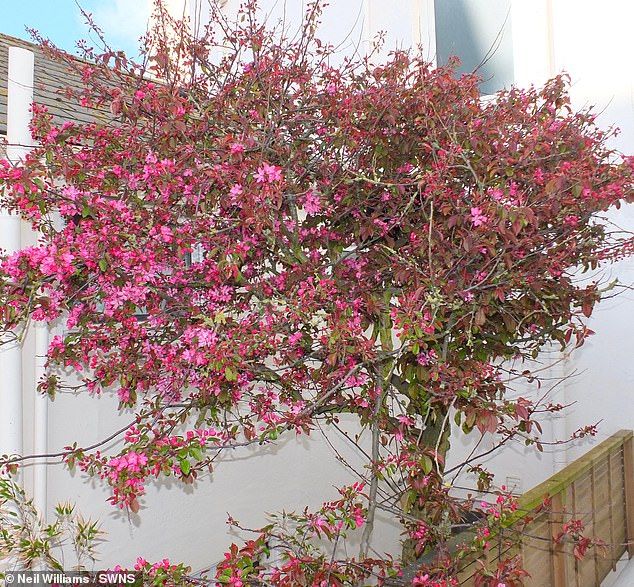 David Gilmour’s neighbours in Hove want to cut down a cherry tree, complaining of ‘fruit frequently falling to the ground’. Locals have called for it to remain, as it helps 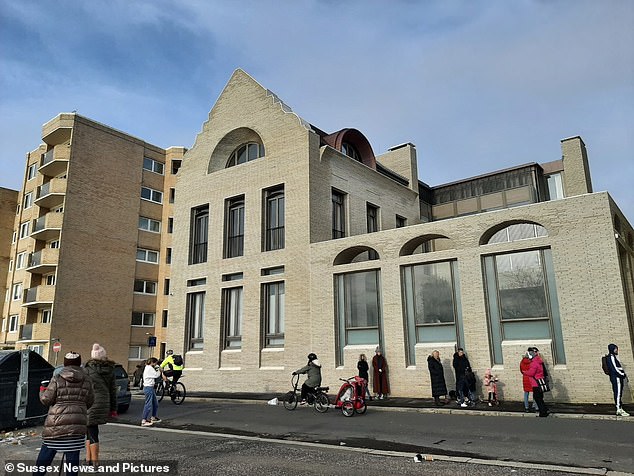 Some locals claim the £2.5million mansion has become overbearing and created an ‘oppressive sense of enclosure.’ Pictured, a computer generated image of the building

In an application to Brighton and Hove Council, a planning agent acting on behalf of the occupants, named only as Mr and Mrs Leslie, wrote: ‘The tree in question is a fruit tree around 4m tall, it is not subject to a tree preservation order. 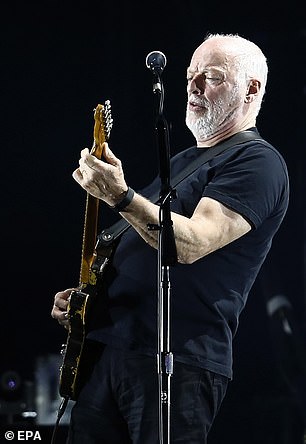 ‘My client wishes to remove the tree as it is inappropriately planted within an extremely small courtyard.

‘It has been planted within a planted right up next to the garden boundary wall. It is far too close to the wall and the house and we fear that it will cause damage to both, as well as to below ground pipework, by the roots.

‘Fruit is frequently falling to the ground which causes a mess and the space is so small that one cannot avoid walking over it. The tree also causes shading to an already shady courtyard and the rooms off it.’

A decision will be made by Brighton and Hove City Council but the fresh proposal follows plans to extend the home that were refused last year due to the loss of the tree.

Mr Williams said he feared the neighbours, who live in London, were trying to chop down the tree to get round the reasons for refusal.

He added: ‘It was dismissed because of the tree and loss of amenity for neighbours.

‘I would imagine David Gilmour would also support keeping the tree. This is the last bit of nature in the area and is really worth fighting for.’ 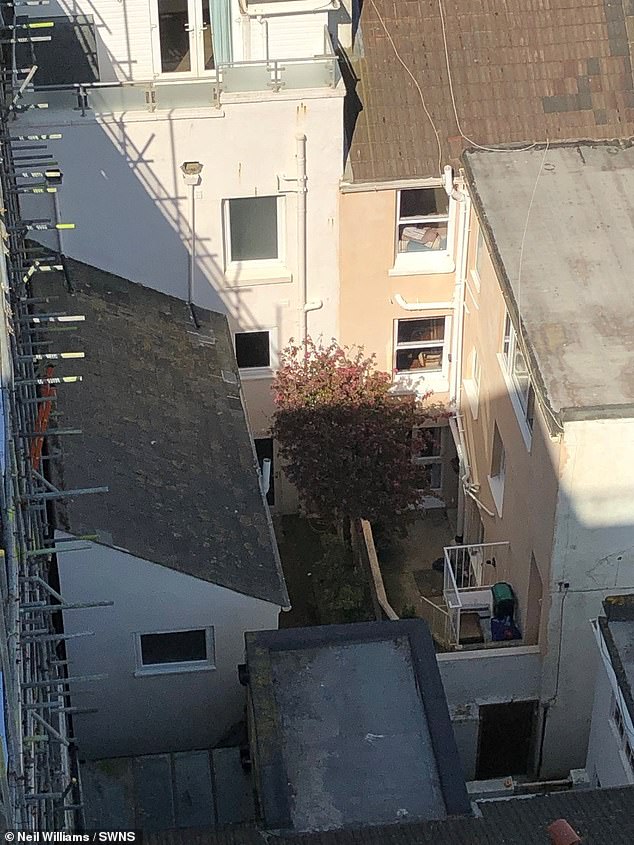 David Gilmour purchased Medina House on Sussex Road in 2015, demolished it in 2018 and has been redeveloping it since then. Local campaigner Neil Williams say more than a dozen neighbours want the cherry tree to stay 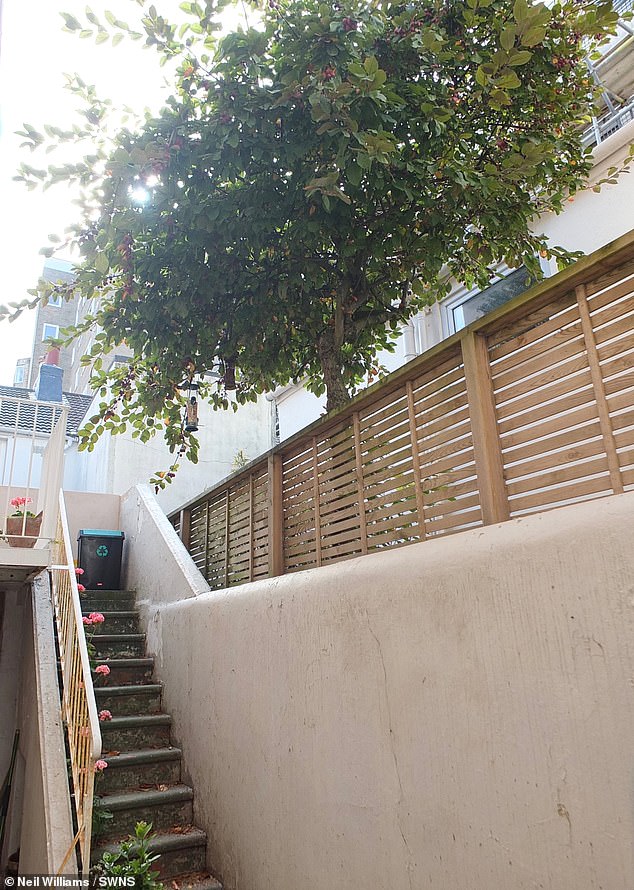 Planning agent for the applicant say the tree is ‘inappropriately planted within an extremely small courtyard’ at their home in Sussex Road, Hove

Several objections to its removal in the original extension application made reference to Gilmour’s Medina House redevelopment.

The 75-year-old and his wife, novelist Polly Samson, have recently put the finishing touches to the multi-million pound 15-room property built on the former site of the former derelict Turkish baths.

They bought the property in 2015 but quickly discovered the historic structure was dilapidated beyond repair, and would need to be knocked down.

After years of building work, hoardings surrounding their new home were removed in October last year.

But some neighbours said the development only added to the ‘oppressiveness’ of their homes – with the tree the last natural tonic.

One said: ‘This is the last remaining tree in the area. The existing new development of Medina House has caused much overshadowing and oppressiveness to other properties in Sussex Road, and this proposed development would make the problem worse.’

Tonight Mr Williams will ask Brighton and Hove councillors how they can support ‘the destruction of a much-loved, healthy, mature tree in the Cliftonville Conservation Area?’

Others described it as a large, healthy, mature cherry tree which over the years has fed and sheltered ‘thousands of sparrows, wood pigeons, starlings, crows and even the odd sparrow hawk.’ 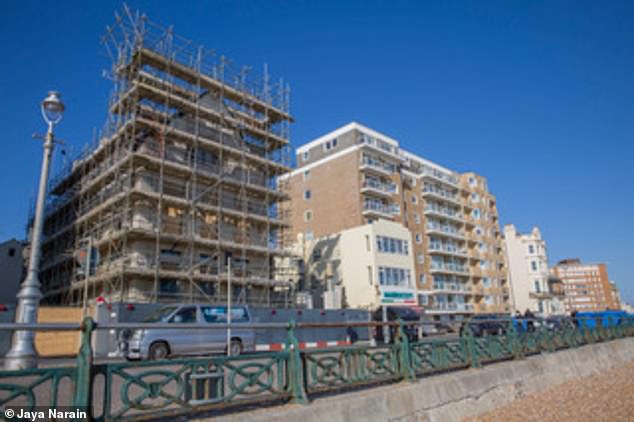 Neighbours fighting to keep the tree say Medina House (left, during building work last April)  has created an oppressive sense of enclosure for properties to the north of the site’ 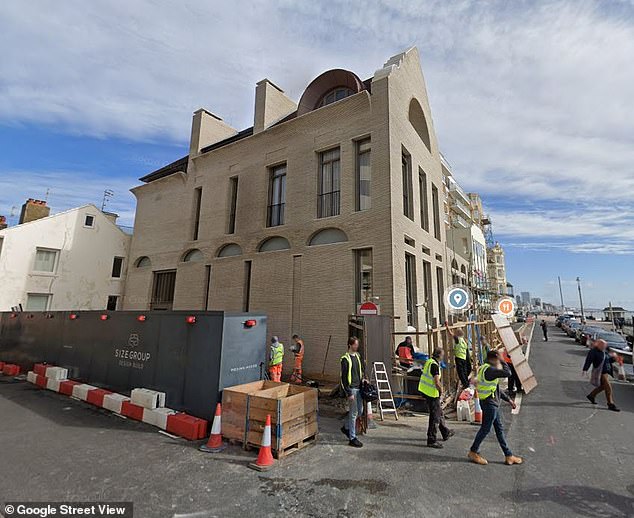 Another said: ‘The tree breaks the skyline and prevents a sense of enclosure, particularly with the looming presence of the new construction on the Medina House site. The removal of the tree would be a catastrophe for the local area.’

Another neighbour said: ‘The recent development in Medina House has created an oppressive sense of enclosure for properties to the north of the site. This will only add to the sense of enclosure we already feel, removing the remaining amenity space.

Another said: ‘The removal of the tree and this space would greatly increase the sense of enclosure particularly in relation to the loss of light and sky as a result of the Medina House site redevelopment.’

Mr Williams told The Argus that he has received backing from other locals.

He said: ‘This tree is not enjoyed by a ‘few residents’.

‘We have 15 or so neighbours who have stated they either enjoy the tree or the wildlife it attracts.’

Jockey Adrian McCarthy regretful after ban for being 1,000 times over cocaine limit

What is menudo, and why is this stew so controversial in the Southwest?