It was a massive campaign which saw tens of thousands of big-hearted Britons clear rubbish across the country – helped by an army of child volunteers.

Now Keep Britain Tidy and campaign supporters, including the Daily Mail, have one thing to say to the heroes who took part in the Great British September Clean: Thank you.

The two-week campaign, which ended yesterday, saw Britons waging war on waste on beaches, in the countryside, on streets and in parks after the nation was left horrified by the pile-up of lockdown litter. The annual litter pick, which in 2019 was the biggest environmental action the UK had ever seen, was postponed in March after it became clear the coronavirus crisis was getting worse. 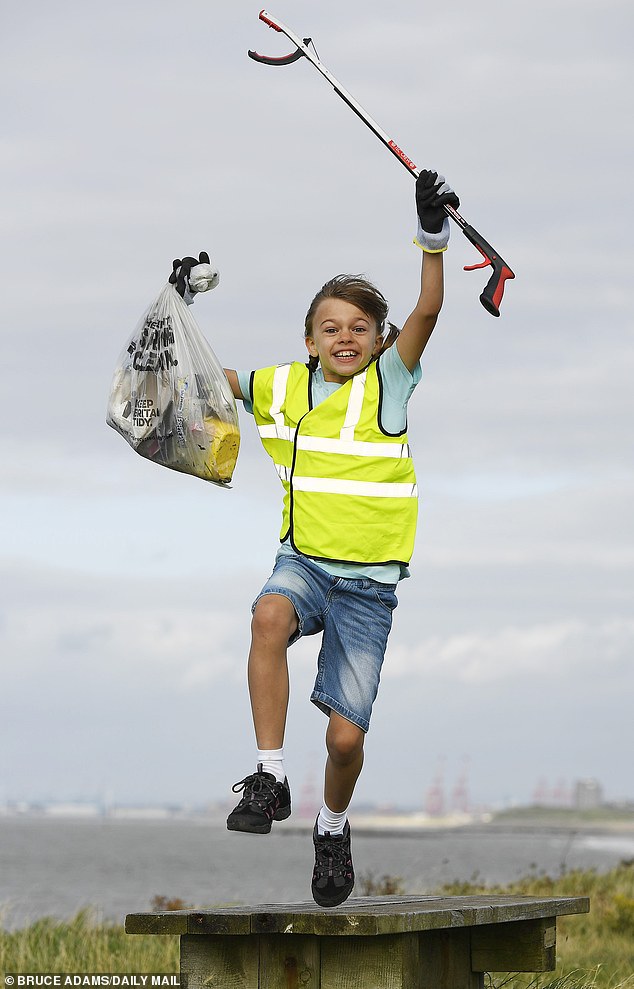 Even though some predicted it would be impossible to run a campaign amid a global pandemic, Keep Britain Tidy realised there were plenty of people determined to do their bit. The drive received high praise from Boris Johnson who urged Britons to ‘roll up their sleeves’ and join in.

Environmental and wildlife groups backed the campaign – along with the Wombles of Wimbledon Common.

Volunteers around the UK took part in litter picks – either individually or in small groups. They included young children, top athletes and employees picking up rubbish during lunch breaks. 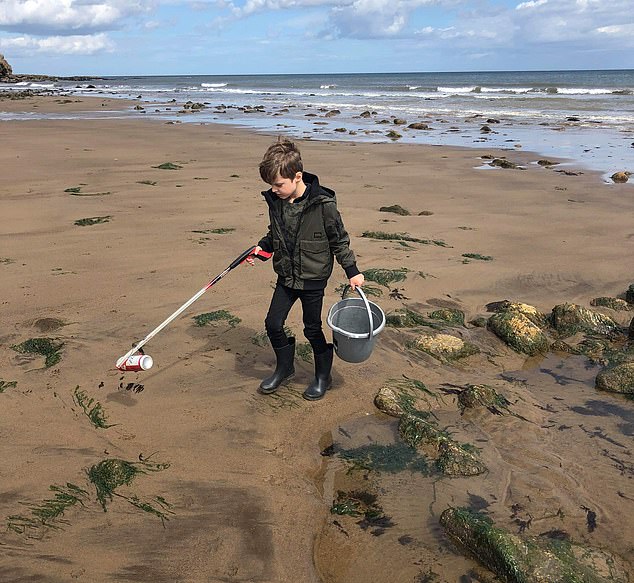 Zac Rogers, from Durham, is an old hand at litter picking at just six years of age – there is always a spare bin bag and picker or two in his family campervan

Pint-sized heroes included Quinn Mather, from Glasgow, who at just 18 months old was out with his family every day gathering litter to put in his bright red pull-along cart. Meanwhile Finley Delves, 12, and sister Evie, eight, from Kettering, Northamptonshire, have been picking up waste for years and always take two bags down to the beach for collections – one for litter and one for ‘treasure’ such as shells or stones. Zac Rogers, from Durham, is an old hand at litter picking at just six years of age – there is always a spare bin bag and picker or two in his family campervan.

Elsewhere, Elizabeth Gadsdon, nine, from the Wirral, also joined daily litter picks throughout the Great British September Clean. Farming Minister Victoria Prentis marked the end of the campaign by taking part in a litter pick in Bicester in her North Oxfordshire constituency. She led praise for volunteers who helped to make Britain beautiful again. She said: ‘It is good to see so many people going out and cleaning up their communities for the Great British September Clean, even during this challenging time.

‘Littering is completely unacceptable. It blights our communities and, as Farming Minister, it is harrowing to hear of the suffering that litter can cause animals and wildlife. 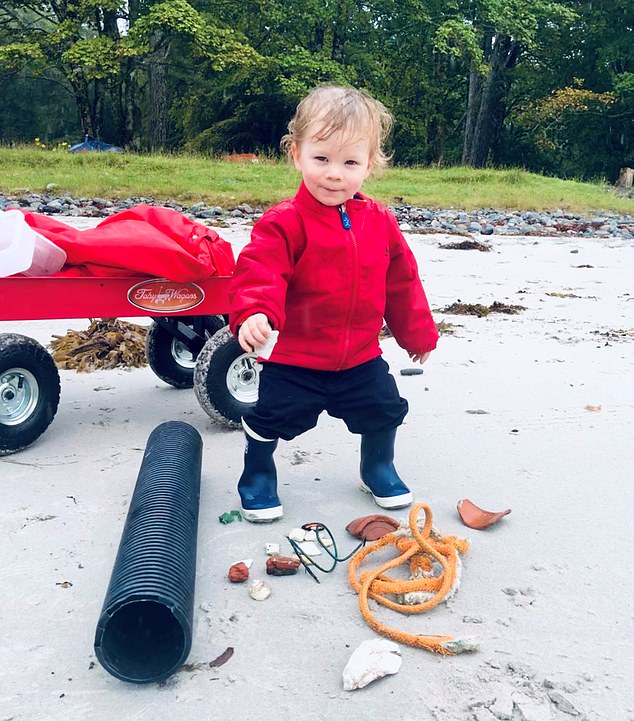 Quinn Mather, from Glasgow, at just 18 months old was out with his family every day gathering litter to put in his bright red pull-along cart

‘As well as removing litter from our streets and countryside, we want to stop it appearing in the first place and I have no doubt that this annual event is having a huge impact on tackling litter, both physically and socially.

‘I want to thank Keep Britain Tidy and the Daily Mail for their resolute commitment to tackling this scourge head-on – and all those who have supported this important cause.’

West Midlands Mayor Andy Street took to the tow paths of Birmingham to support the clean-up. He was joined by a small group from local authorities and they managed to fill four bin bags with beer bottles, crisp packets, cigarette butts – and old carpet. 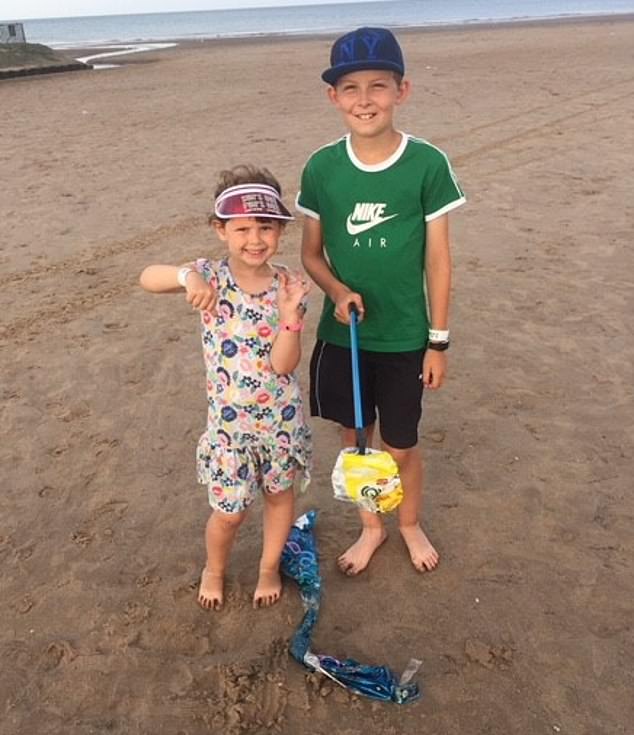 Finley Delves, 12, and sister Evie, eight, from Kettering, Northamptonshire, have been picking up waste for years and always take two bags down to the beach for collections – one for litter and one for ‘treasure’ such as shells or stones

He said: ‘Over the past few months, as so many lives have been changed by the impact of coronavirus, the pleasure derived from being able to enjoy their local environment and green spaces has never been more important for so many. So, as we try to keep up our hopes of a return to some of kind of normality, there’s one thing we don’t want to see returning to normal.

‘That’s the visual blight on our green spaces and neighbourhoods caused by those who drop litter or dump rubbish and the damage it causes to our environment and the impact it has on our wildlife.’

Mr Street added: ‘Whilst it goes without saying that it’s an irresponsible minority who are most at fault, I’d ask everyone who can to support this campaign – this month and every month.

‘It’s, of course, vitally important to follow Government guidelines on social distancing at all times, but I’d urge everyone who can do so safely to get outside with a litter picker, mask and a bin bag and see what a positive difference they can make to their local area.’ 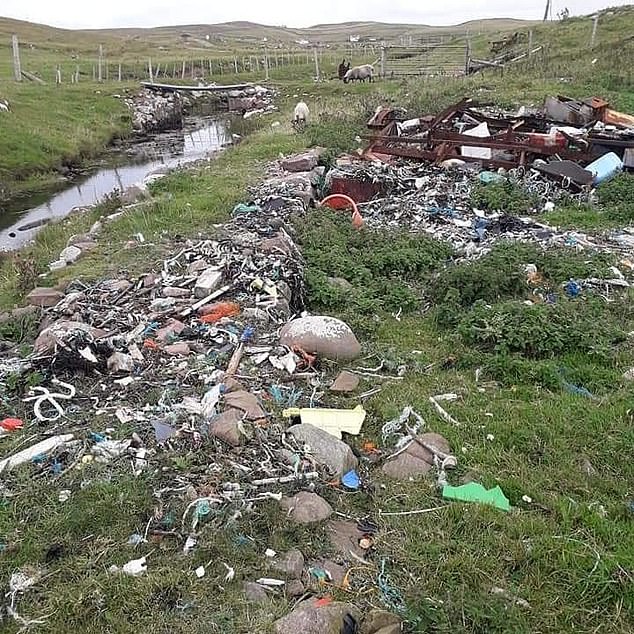 Others who have supported the campaign include TV presenter Ulrika Jonsson, who said she hates litter so much she picks up other people’s when she’s out walking. TV wildlife expert Ray Mears also took part in a litter pick. He branded throwaway rubbish as a ‘bitter indictment of society and how we don’t properly value the world around us’.

Richard McIlwain, of Keep Britain Tidy, said: ‘We would say a massive thank you to everyone who has supported the Great British September Clean.

‘It has been incredibly challenging running the campaign against the backdrop of a pandemic.

‘But tens of thousands of people have joined us in doing their bit to tackle the littering they see around them and we are incredibly grateful to them, to the Daily Mail and to all our partners who have stuck by us and gone the extra mile to make the campaign so successful.’