P&O today dramatically sent all its ferries back to port and disembarked confused passengers ahead of a ‘major announcement’ – amid claims it is about to ‘fire all UK staff on the spot and replace them with foreign labour’.

Today, three ferries were seen returning to the Port of Dover as worried staff braced themselves to hear their fate. Bosses said the announcement would ‘secure the long-term viability’ of the firm and it is not going into liquidation.

Rail, Maritime and Transport (RMT) union general secretary Mick Lynch said there is ‘growing speculation that the company are today planning to sack hundreds of UK seafarers and replace them with foreign labour’.

He added: ‘We have instructed our members to remain on board and are demanding our members across P&O’s UK operations are protected, and that the Secretary of State intervenes to save UK seafarers from the dole queue.’

Transport Secretary Grant Shapps told the House of Commons he is ‘concerned’ by the situation and his officials are holding urgent talks to clarify what is going on.

Meanwhile, DUP MP Jim Shannon claimed in the Commons that nearly half of the firm is owned by a Russian business. ‘I understand that 40% of the holdings of P&O Ferries is held by a Russian company,’ he said. 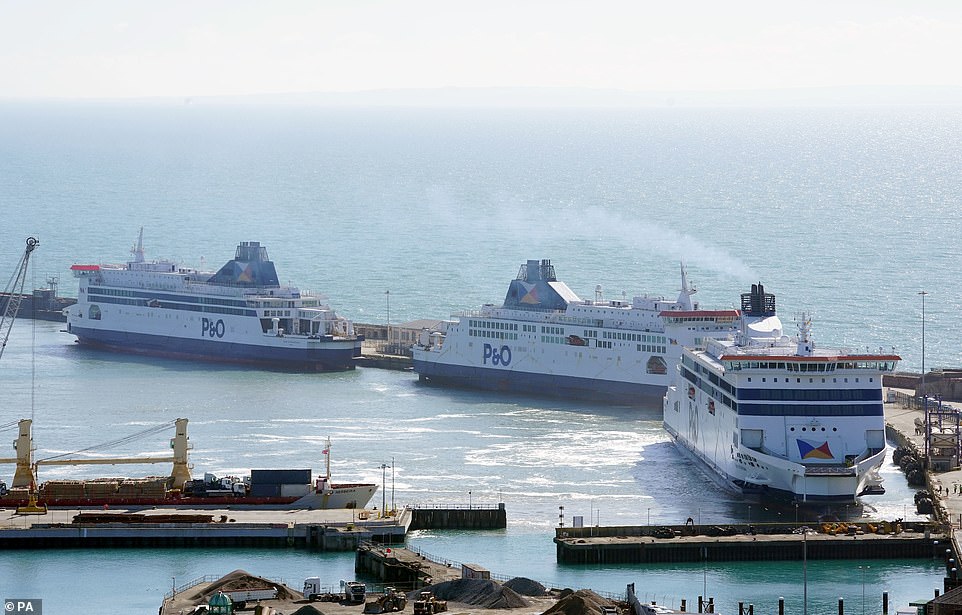 Three P&O ferries, Spirit of Britain, Pride of Canterbury and Pride of Kent moor up in the cruise terminal at the Port of Dover in Kent as the company suspended sailings 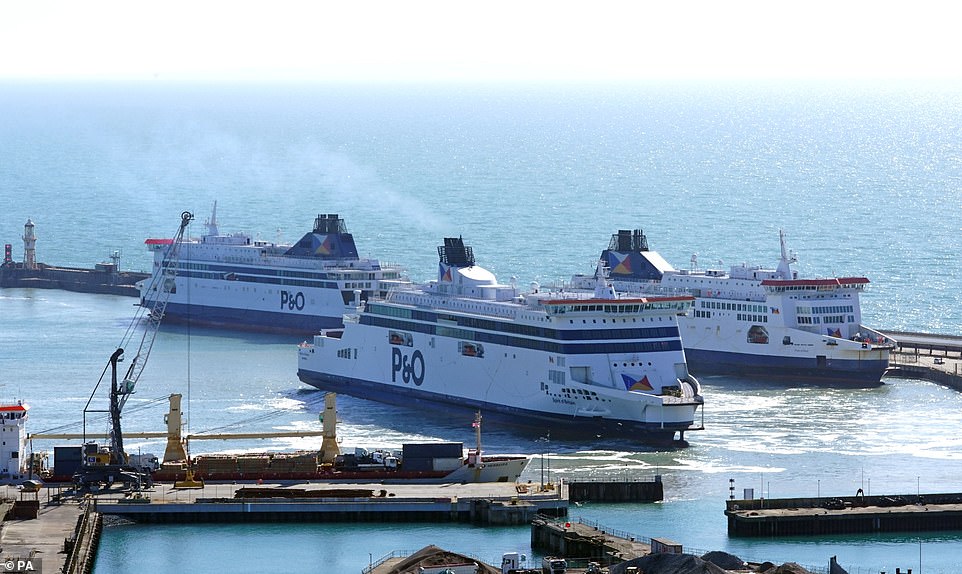 Mr Shapps said: ‘I understand they have temporarily paused their operations and that’s causing disruption at the short straits – Calais-Dover – as well as some other ports.

‘I’m working with the Kent Resilience Forum and I’ve just instructed them to become intricately involved, and other partners in this, and we’ll be taking steps later today – including ensuring that my officials will be having urgent discussions with P&O about the situation, particularly of concern for their workers.’

It operates four routes: Dover to Calais; Hull to Rotterdam; Liverpool to Dublin; and Cairnryan, Scotland, to Larne, Northern Ireland.

Sailings between Hull and Zeebrugge, Belgium, were axed in January 2021.

In an internal company statement, the ferry operator said it will be ‘making a major announcement today’ which will ‘secure the long-term viability of P&O Ferries’.

P&O made the unusual announcement in a Twitter post. It said passengers would be passed to a different operator

The statement added: ‘To facilitate this announcement all our vessels have been asked to discharge their passengers and cargo and stand by for further instructions.

‘This means we’re expecting all our ports to experience serious disruption today.’

Following the coronavirus outbreak, P&O Ferries warned in May 2020 that around 1,100 workers could lose their jobs as part of a plan to make the business ‘viable and sustainable’.

A spokesman for the firm said: ‘P&O Ferries is not going into liquidation.

‘We have asked all ships to come alongside, in preparation for a company announcement.

‘Until then, services from P&O will not be running and we are advising travellers of alternative arrangements.’ 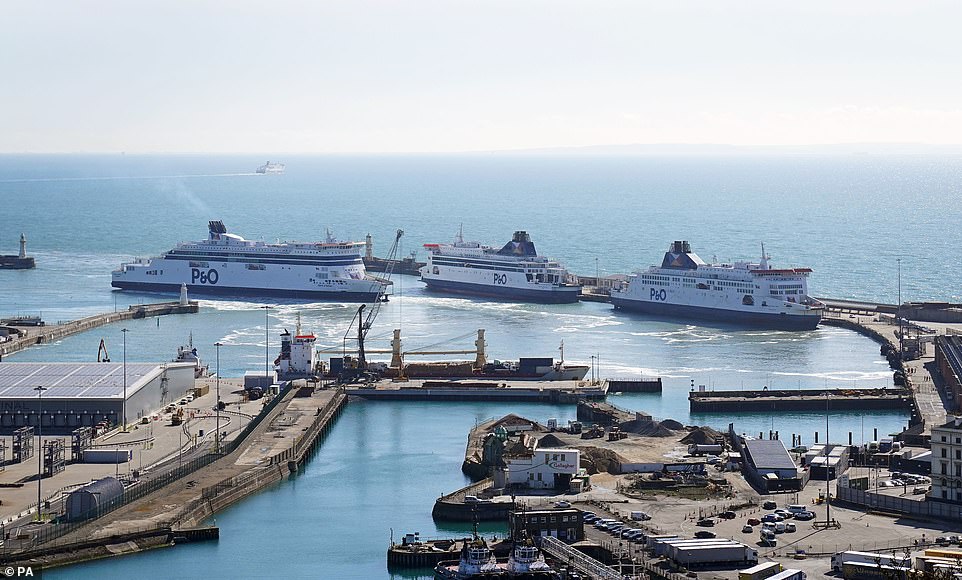 P&O Ferries, which transports passengers and freight, is owned by Dubai-based logistics giant DP World. Pictured: Ferries at the Port of Dover today 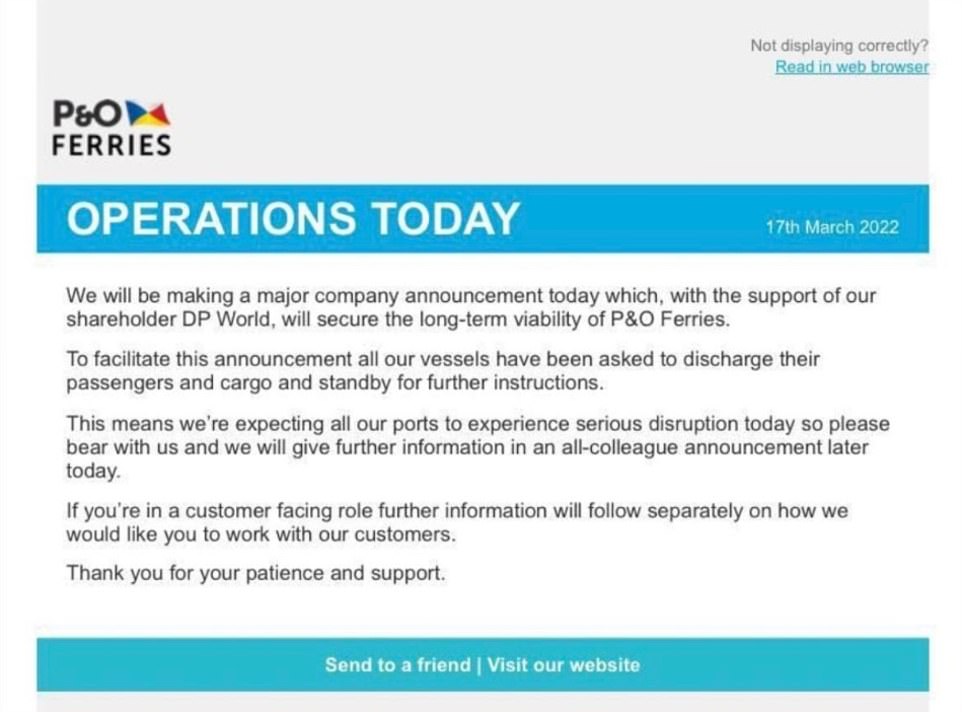 Stormont Assembly members whose constituency incorporates the port of Larne expressed concern about the potential implications for the route to Cairnryan.

East Antrim MLA John Stewart, who has relatives who work at the port, said staff were uncertain about what would be announced.

‘The information is being nothing more than drip-fed to them,’ the Ulster Unionist MLA told BBC Radio Ulster.

He said it is a ‘worrying’ development.

‘For the staff, for Larne port itself, particularly for the local effect here, and also for businesses and passengers that regularly use that service, it’s an invaluable local service over to Cairnryan and I think this news will be deeply worrying for all of them, especially in the absence of any concrete information as to what the long-term strategy is going to be.’

The company that would become P&O was founded in 1837 after signing a government contract to transport post by boat between London and the Iberian Peninsula.

Want to Get Certified in Botox? Here’s How

Even at 74, Kenny Loggins' voice sounds as youthful as his songs, which have a habit of making us feel young, too. The singer talks with correspondent Lee...