Pogba: Varane is a strong boost for Manchester United and our level will gradually increase 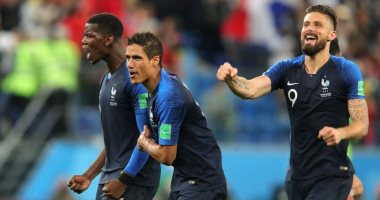 Varane presented to Manchester United from Real Madrid for 50 million euros, just one year before the expiration of his contract at the Santiago Bernabeu to strengthen the defense line of the English club under the leadership of Ole Gunnar Solskjaer..

Pogba said in his interview with the network “Telefoot” The French on Varane’s deal, “Raff’s joining of Manchester United is positive, especially for the club“.

Paul Pogba added, “My relationship with Varane is very good, we have known each other for a long time, and I am happy that he is at Manchester United to add to us his experience and special capabilities.“.

The French star added, “It is always a pleasure for Saroui to play with the best, and Varane with the team is a strong push forward, our level will increase for the better.”“.

Pogba concluded his remarks by saying, “Hopefully everything will go well this season with Manchester United“.

In a different context, Manchester United striker Mason Greenwood won the Player of the Month award with the team, after three rounds of the new season in the English Premier League. .

Greenwood outperformed his fellow Frenchman Paul Pogba and Portuguese Bruno Fernandes, who ranked second and third, as Greenwood received 66% of the team’s fan vote with Pogba receiving 24% and Bruno 10%.

Johnson delivers 900 million doses to the African Union, including Egypt

How to dress for a big occasion without buying ANYTHING new