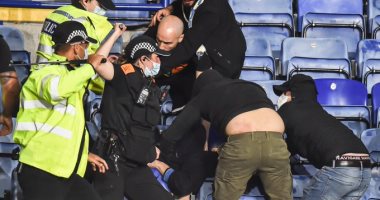 English security forces arrested dozens of Napoli and Leicester City fans after clashes erupted between the two sides before the two teams’ match in the European League.

Napoli, Italy, snatched an exciting 2-2 draw from its host Leicester City, in the match that brought the two teams together yesterday evening, at the “King Power” stadium, in the first round of Group C competitions, of the European League for the current season 2021-2022, and in the same group they beat Poland’s Legia Warsaw beat Spartak, Russia, with a clean goal, to top Group C with 3 points.

Police with batons fought a big battle to separate rival fans as skirmishes erupted and the hosts struggled to restore order. About 100 policemen raced to the King Power Stadium, where 250 Napoli fans were protected after bottles were thrown shortly after the final whistle, then police called The fans need to respect their club by not crossing the barriers between the stands of the two sides.

It happened after Leicester fans saw their second-half lead lost from Victor Osimhen, with the Napoli striker snatching the equalizer three minutes from time, and with the final whistle a small group of Napoli fans appeared to mock their Leicester counterparts before the battle erupted between sides.

And it is likely that a police investigation will be opened into how the situation escalated so quickly, as the police moved and the Napoli supporters were stopped, surrounded by a ring of security and remained there for more than 30 minutes while the fans dispersed at home.

Leicester will also face the prospect of administrative penalties while UEFA chiefs investigate the cause of the problem.