Portland cops have arrested four people after declaring a riot Friday night after protesters smashed windows, burglarized businesses and set multiple fires during demonstrations over the fatal police shooting of a white man in the city.

The man, who was aged in his 30s but has not been publicly named, was shot and killed by an officer Friday morning in Lents Park, a leafy, residential neighborhood of the city.

Police named the officer who fired his gun as Zachary Delong. He is on paid administrative leave.

Officers were reportedly called to the scene to respond to reports of a man with a gun.

The police investigation into the shooting was hampered by a crowd of ‘fairly aggressive people’ who showed up at the park within two hours of the shooting. Those arrested could face charges ranging from assaulting a public safety officer to criminal mischief.

As investigators worked the scene of the shooting and huddled over a covered body, nearly 100 yards away, a crowd of more than 150 people – many dressed in all black and some carrying helmets, goggles and gas masks – gathered behind crime scene tape, chanting and yelling at officers standing in front of them.

The crowd later marched through the park, ripped down police tape and stood face to face with officers dressed in riot gear. Police left the park around 3:30 pm, and the crowd eventually stood in a nearby intersection, blocking traffic and chanting.

Police said they had used pepper spray on protesters in order to keep them away. Some people hit officers with sticks and chased them as they were leaving, police said in a news release. Officers deployed smoke canisters and then used a rubber ball distraction device, police said.

As night fell, protests over that shooting – as well as the police killings of Adam Toledo in Chicago and Daunte Wright in Minneapolis – soon spiraled out of control in the city’s downtown. 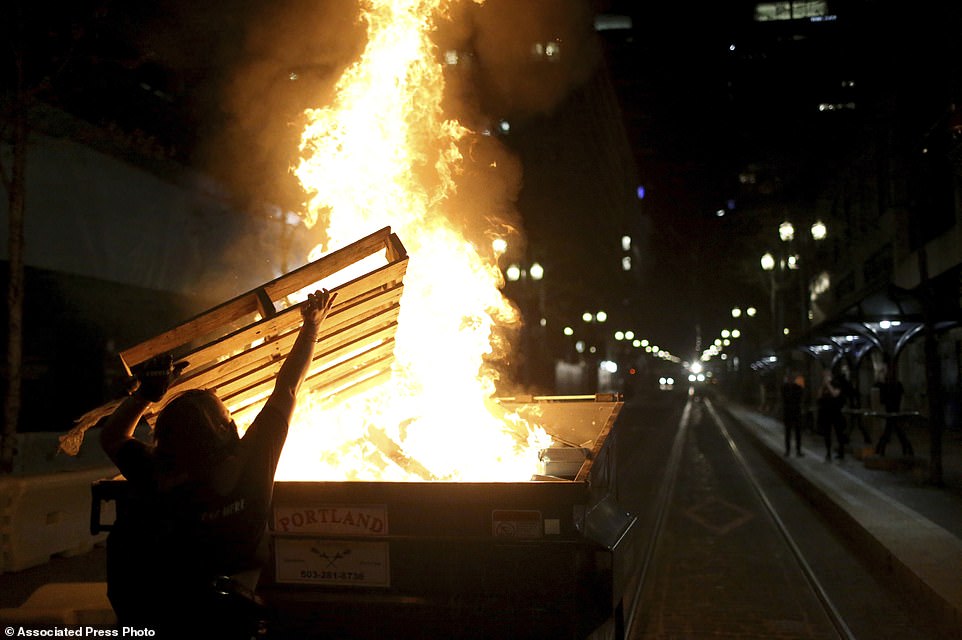 Portland cops have arrested four people after declaring a riot Friday night after protesters smashed windows, burglarized businesses and set multiple fires during demonstrations over the fatal police shooting of a white man in the city 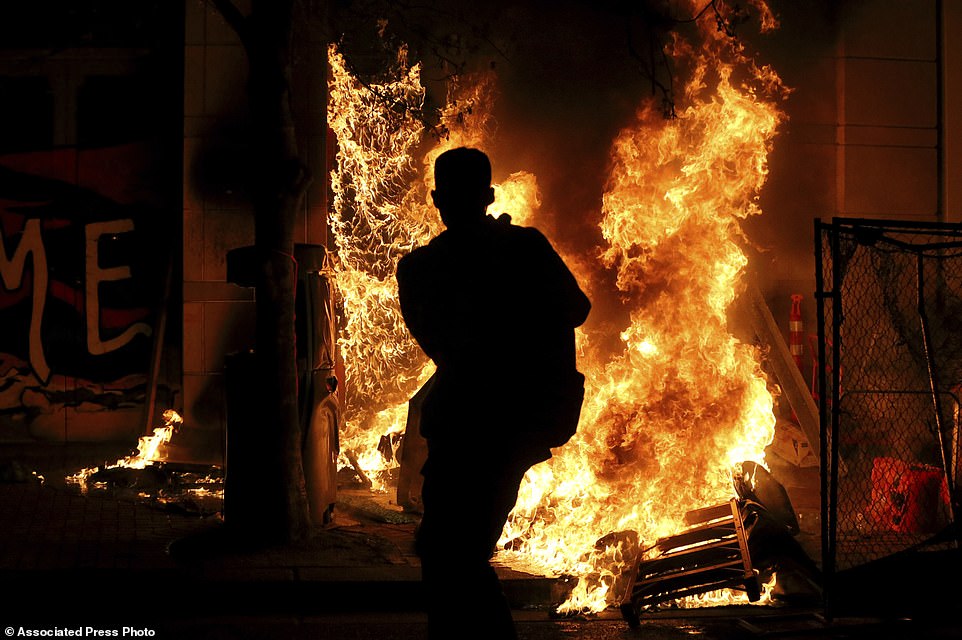 Protesters lit a portable bathroom on fire in downtown Portland. Police said they dispersed the crowd so firefighting crews could douse fires before they spread in extreme fire hazard conditions. A riot was declared in the area at 9.30pm 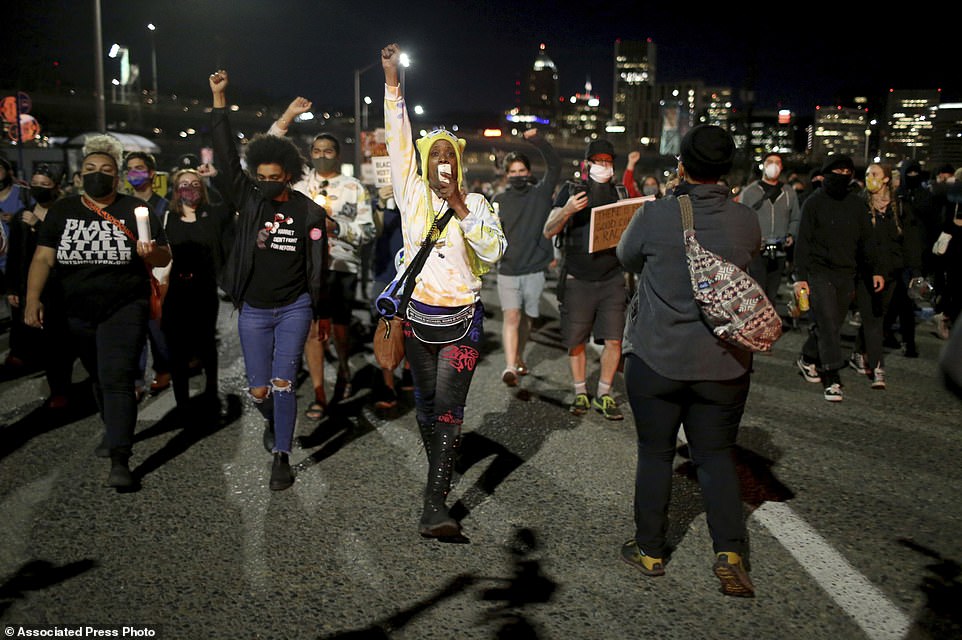 A group marches along the Hawthorne Bridge in Portland before protests spiraled out of control. Cops declared a riot at 9.30pm

Arsonists lit a series of fires, including a large one outside the downtown Apple Store, KOIN 6 reported.

Police said they dispersed the crowd so firefighting crews could douse fires before they spread in extreme fire hazard conditions.

Demonstrators then began smashing windows of stores and stealing merchandise from businesses.

‘Participants in the riot have been seen attempting to burglarize businesses. Leave the area to the west. Failure to do so may subject you to arrest and/or the use of force, including but not limited to impact munitions and tear gas,’ Portland police tweeted just after midnight.

Meanwhile, Nike and Nordstrom stores were both reported to have been vandalized.

Three of the four people arrested have been identified.

Cameron Millar-Griffin, 24, is facing charges of Criminal Mischief I, Resisting Arrest and Disorderly Conduct I.

Theodore Brien, 22 , is facing a charge ofCriminal Mischief I.

A fourth person was arrested but later released, according to PPB.

Portland has been experiencing significant unrest over the past year. 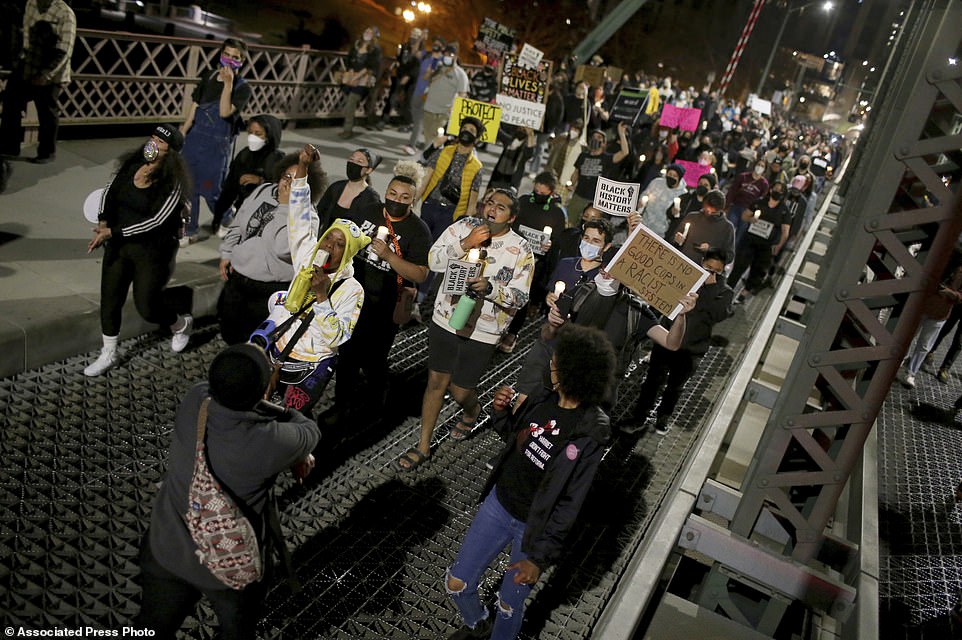 Hundreds gathered for to protest recent police shootings. A white man was shot dead by a cop in a Portland suburb on Friday afternoon, while a 13-year-old boy was killed in Chicago and a 20-year-old was fatally shot by an officer in Minneapolis last week 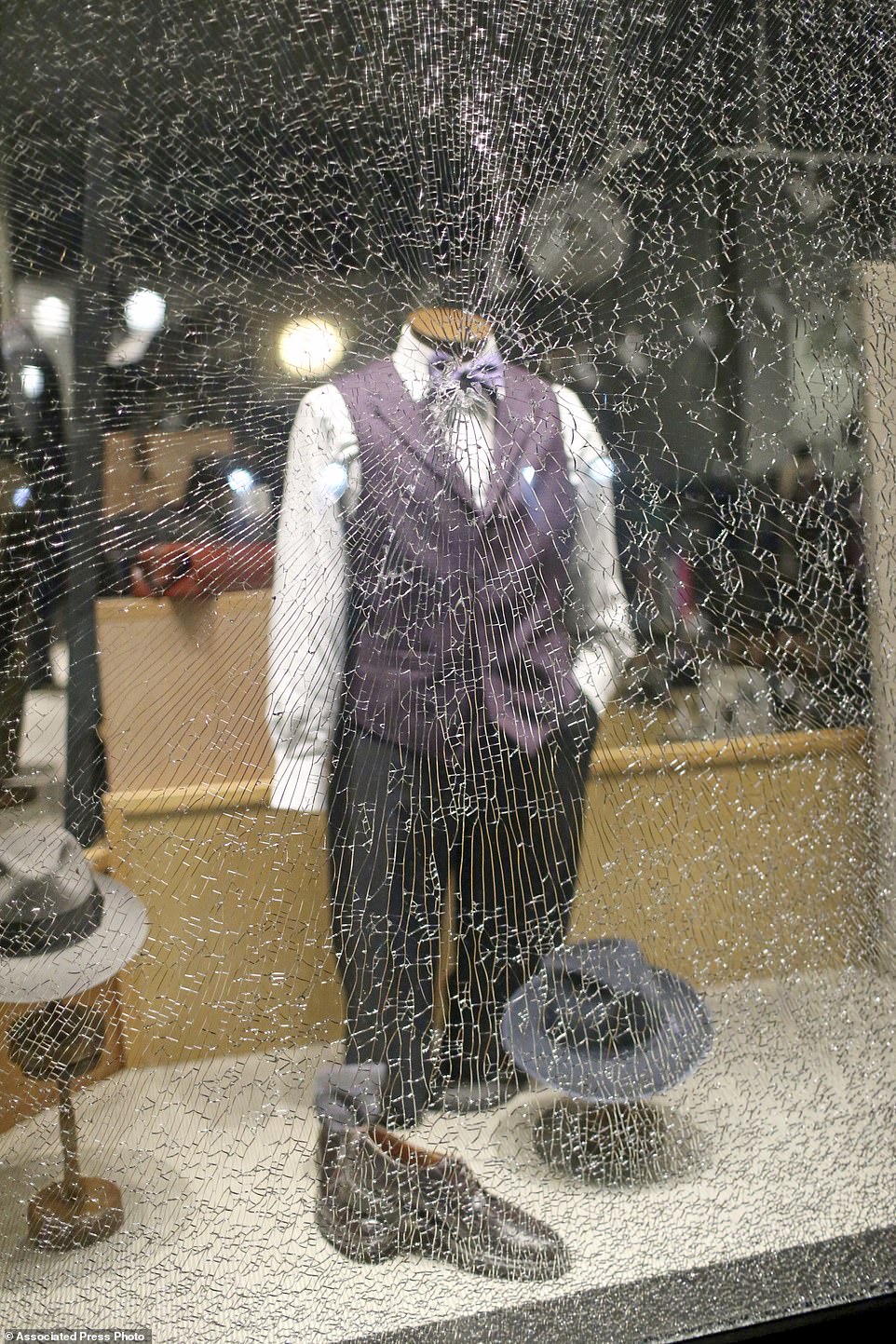 Protesters smashed windows in downtown Portland as police declared a riot at 9.30pm 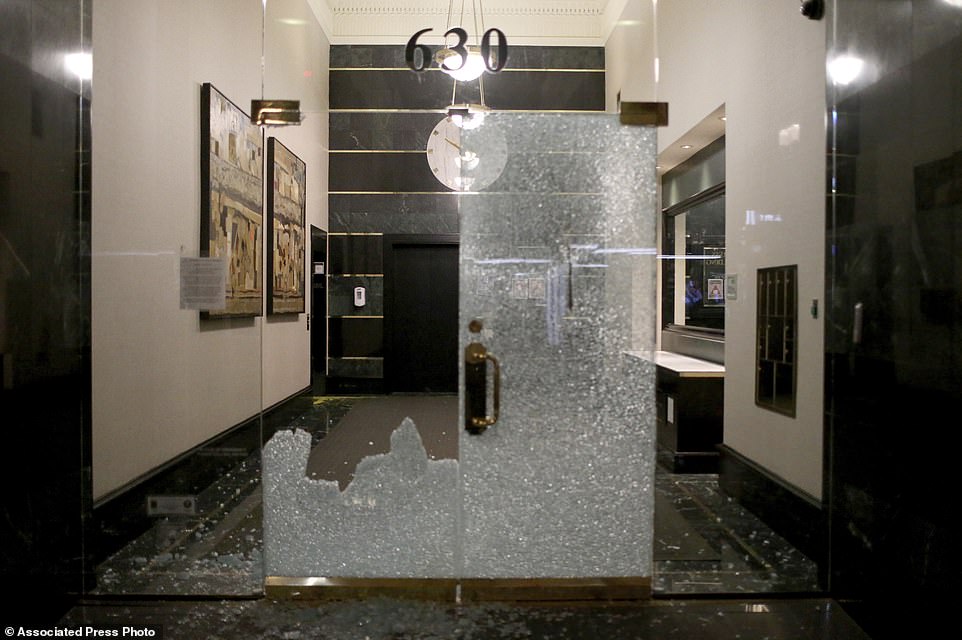 Police arrested several people after declaring a riot Friday night when protesters smashed windows, burglarized businesses and set multiple fires during demonstrations that started after police fatally shot a man while responding to reports of a person with a gun 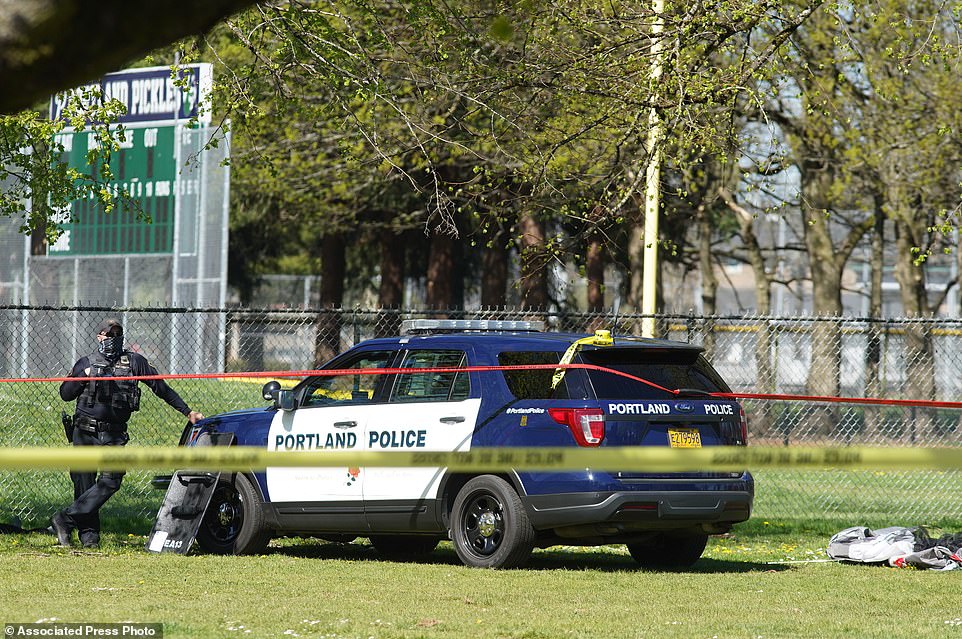 Last summer, there were demonstrations for more than 100 straight days. Earlier this week, a crowd set a fire outside the city’s police union headquarters following recent fatal police shootings in Chicago and Minneapolis.

Portland Mayor Ted Wheeler has previously decried what he described as a segment of violent agitators who detract from the message of police accountability.

On Friday evening, Wheeler called for calm and urged peaceful protest – but his plea fell on deaf ears.

Wheeler visited the Friday shooting scene and issued a statement urging Portland residents to ‘proceed with empathy and peace’ while the investigation unfolds.

These shootings always are traumatic for everyone involved and for our community, regardless of the circumstances,’ Wheeler said.

‘I want to offer my sympathy to the individual involved and to their family. My thoughts also are with the officers who were involved.’ 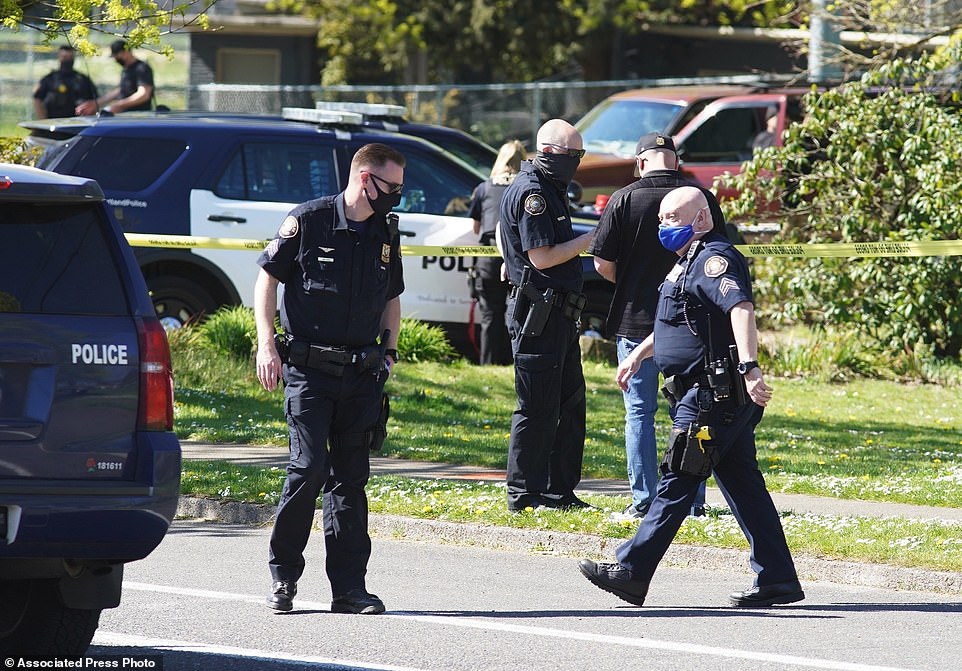 Law enforcement personnel work at the scene following a police involved shooting of a man at Lents Park, Friday, April 16, 2021, in Portland, Ore. Police fatally shot a man in the city park Friday morning after responding to reports of a person with a gun, authorities said. (Beth Nakamura/The Oregonian/The Oregonian via AP)

In Chicago, thousands of people marched for Adam Toledo, the 13-year-old who was killed by the police last month, before video was released on Thursday showing the shooting, sparking outrage.

The protests began before 6pm, with hundreds of people gathering in Logan Square Park, planning on marching to Mayor Lori Lightfoot’s residence.

The number of protesters swelled into the thousands as the night went on, with the intersection of Milwaukee, Diversey and Kimball shut down around 7:30pm, according to ABC7.

Two protesters were subsequently arrested in the city. 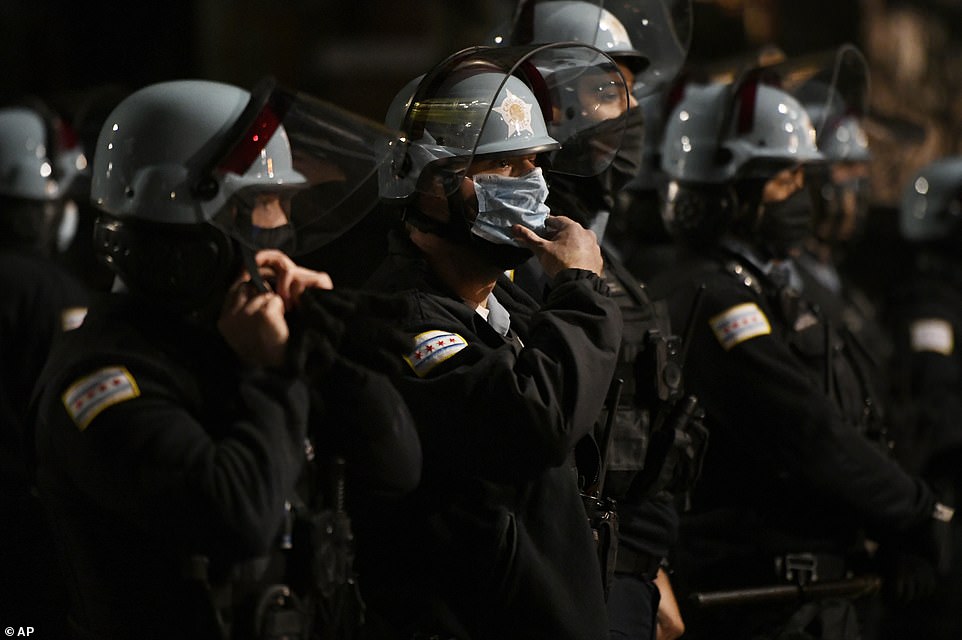 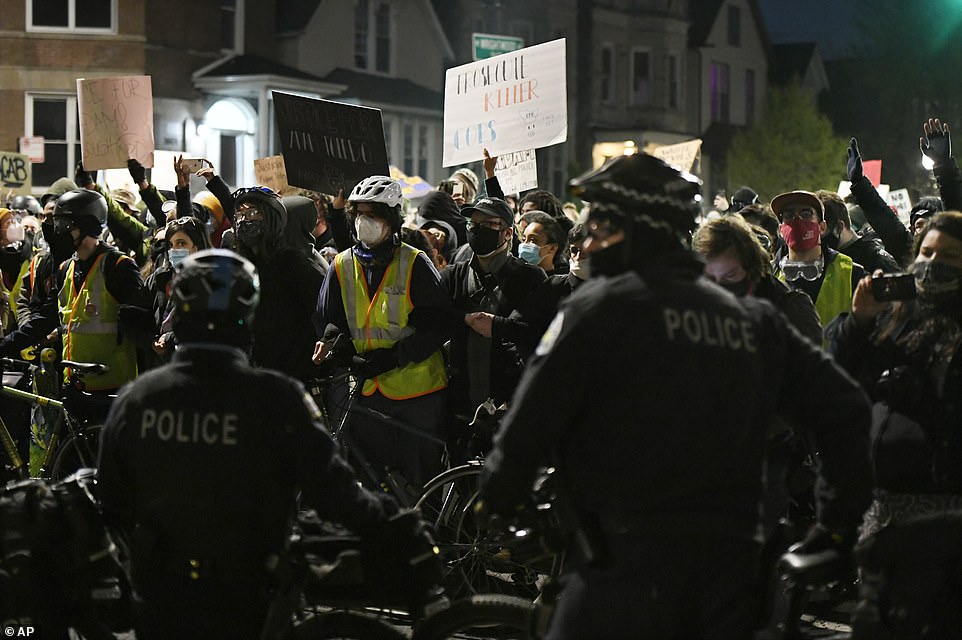 Just before 10pm, however, the protest outside of the police department was declared an unlawful assembly, according to KSTP.

Police began deploying flash bangs to scatter the crowd, some of whom shielded themselves with umbrellas.

Pepper spray was used against some protesters, with members of the media also being affected by the pepper spray.

The city then issued a curfew from 11pm to 6am Saturday, despite earlier indications that there would be no curfew on Friday night.

100 protesters were reported to have been arrested in the area on Friday night. 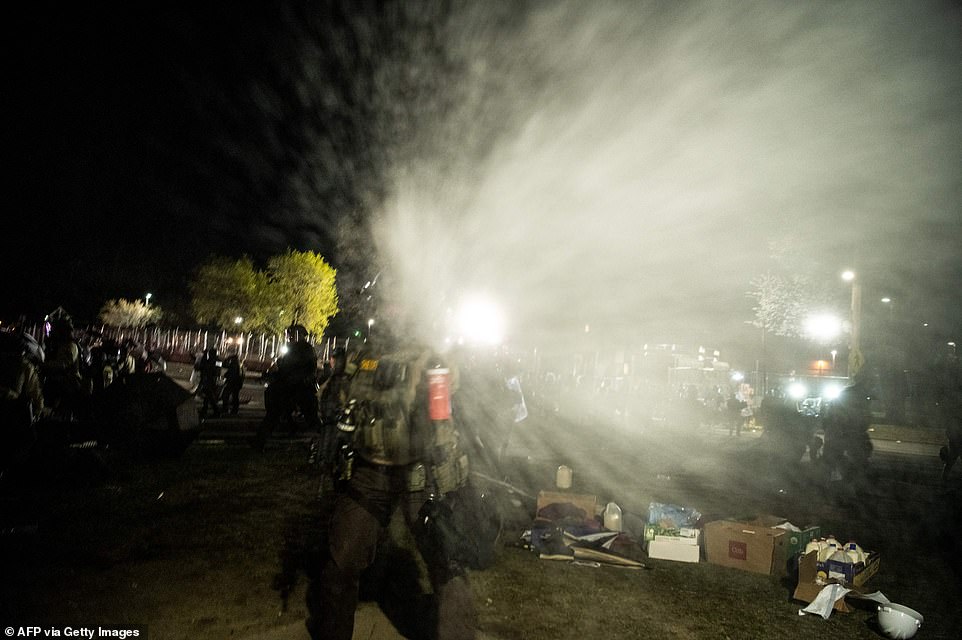