Police have said there are no excuses for breaching Covid-19 laws after being called to break up a 200-strong rave at a university hall of residence.

Investigations are ongoing into the incident, after officers were called to St Peter’s Court in Radford, Nottingham, on Saturday night.

Shocking footage showed huge crowds dancing to loud music before spilling out to the front of the halls to continue the party.

As well as large crowds gathering mostly outside, many smaller parties were happening inside the student accommodation as well.

Nottinghamshire Police said officers were unable to arrest anyone as the crowd dispersed when they arrived, but they were still investigating. 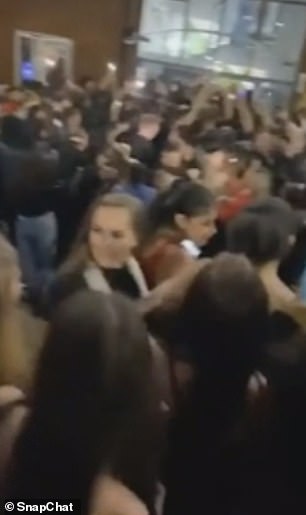 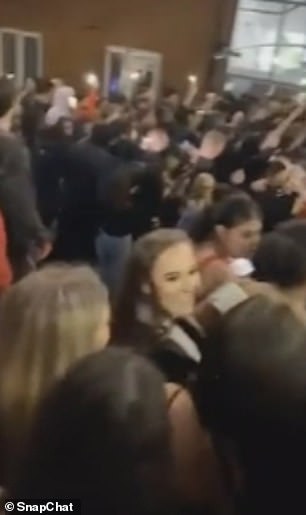 Investigations are ongoing into the incident, after officers were called to St Peter’s Court in Radford, Nottingham, on Saturday night

The force said in a statement: ‘Investigations are also ongoing after officers dispersed a gathering of around 200 young people in an outdoor courtyard at a student halls of residence in St Peter’s Street, Nottingham.’

Police said partygoers across Nottinghamshire had their evenings ‘interrupted’ on Saturday, as officers also tackled several other illegal gatherings and issued multiple fines.

The force said: ‘Officers were called to flat in Pilcher Gate, Nottingham, shortly before 10.30pm last night and issued £200 fixed penalty notices to 21 people found inside.

‘Investigations are ongoing to establish the identity of the organiser, who could face additional punishment.

‘Another large party was broken up shortly after midnight at an address in Corporation Oaks, St Ann’s and the organiser was issued with a summons to appear in court at a later date.’ 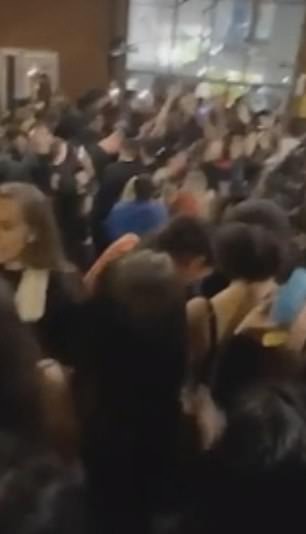 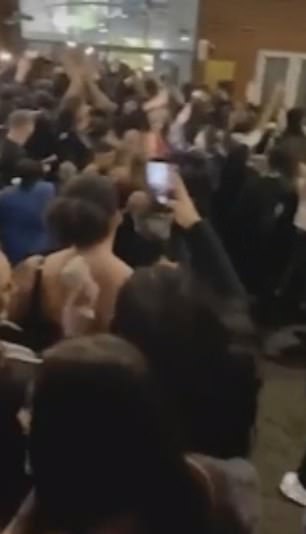 As well as large crowds gathering mostly outside, many smaller parties were happening inside the student accommodation as well

Elsewhere in the county, officers issued another five £200 fixed penalty notices after responding to reports of a party in a field in Gonalston, near Lowdham, shortly after 9pm.

Investigations are under way to identify the organiser of the event, and a driver who crashed into a police car as they fled the scene.

Detective Superintendent Andrew Gowan said: ‘The very last thing we want to be doing as police officers is to be punishing people for gathering together and having fun. 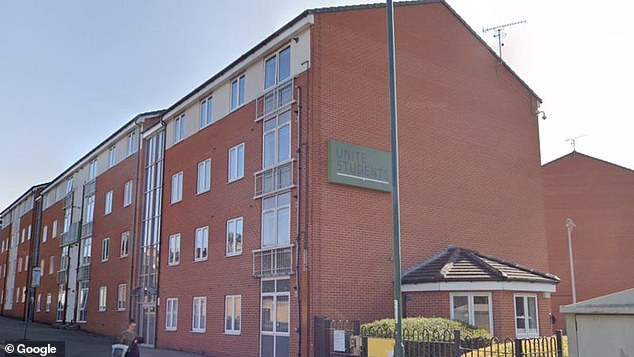 ‘However, the current national restrictions are in place to protect the wider public from harm and we will keep enforcing them for as long as we need to.

‘Whilst it is heartening that the vast majority of people clearly understand and are obeying the current restrictions, it is deeply disappointing that so many others needed such an expensive reminder that the rules apply equally to everyone.

‘We understand that this is a difficult time but there really are no excuses for this kind of behaviour where people are blatantly ignoring the restrictions in such large numbers.’

Students across England are being tested next week as part of the government’s plan to allow them to return home between 3 and 9 December.

Sir Clive Woodward: This non-stop kicking game is killing rugby...it has to stop!

Is platinum the new gold?

What could Democratic control of Senate mean for wages, child care, unions under Biden?