Detectives investigating the savage murder of a British mother during a burglary in Athens have arrested a Georgian man on the Bulgarian border.

The unnamed man has been linked to another violent break-in at a house near the affluent Athens suburb where Caroline Crouch, 20, was strangled to death in front of her 11-month-old daughter Lydia.

A police source said DNA analysis suggested he was one of five people who tied up an old couple and their cleaning lady in a burglary in Pikermi on March 7.

The home is just 20 minutes drive from Glyka Nera, where Caroline was murdered while her husband, helicopter pilot Charalambos Anagnostopolous was tied up and gagged. 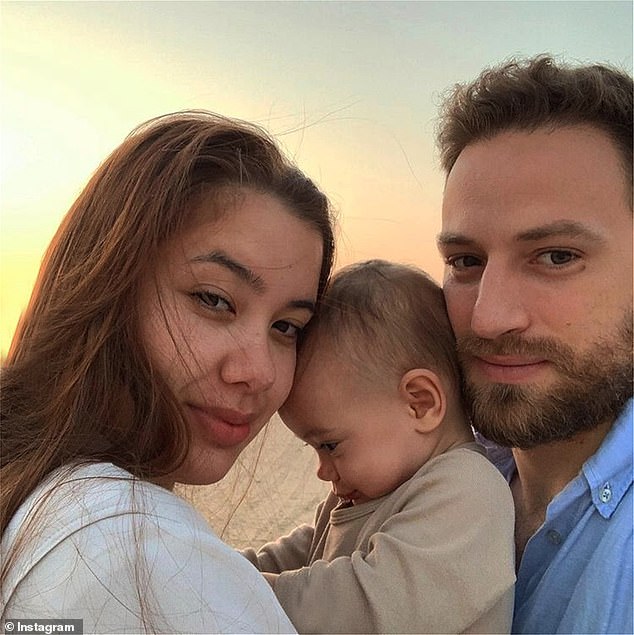 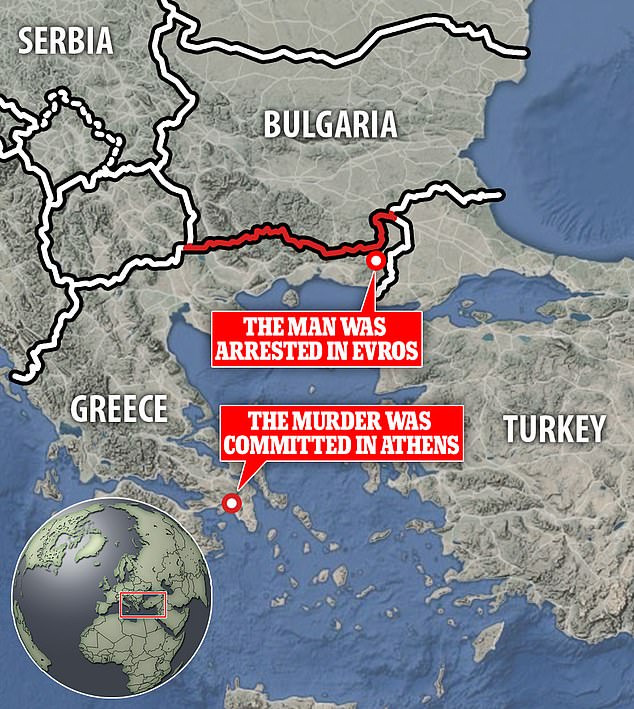 The Georgian man was arrested in Evros, in the far north-east of Greece, which is the main route to Bulgaria

The man was arrested in Evros, in the far north-east of Greece, which is the main route to Bulgaria, local newspaper Vima reporter.

The suspect, who was travelling by car, was held following a routine police stop to cross check his identification when they discovered he was travelling on a fake passport.

He was arrested and taken to the local police station.

The development comes as it is revealed that Caroline’s husband, who is known as Babis, has helped police identify two of the weapons carried by the raiders.

He said the burglars carried a silver Colt and a black pistol.

Police said the weapons were unusual to find in Greece and believe tracing them could prove vital in identifying Miss Crouch’s killers. 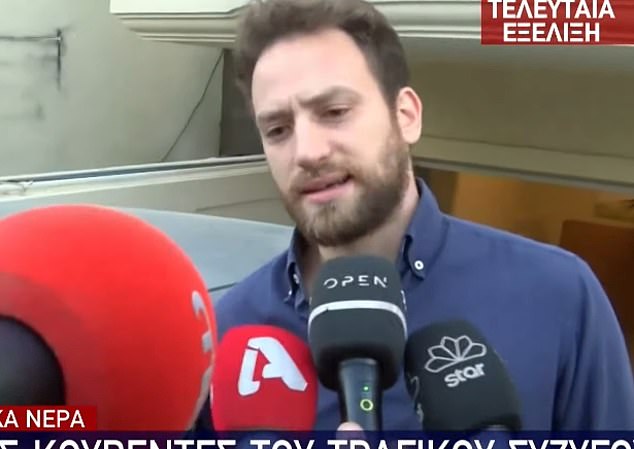 The helicopter pilot Charalambos Anagnostopolous (pictured), known as Babis, saw the face of his 20-year-old wife’s killer as he leapt onto the bed where they were sleeping 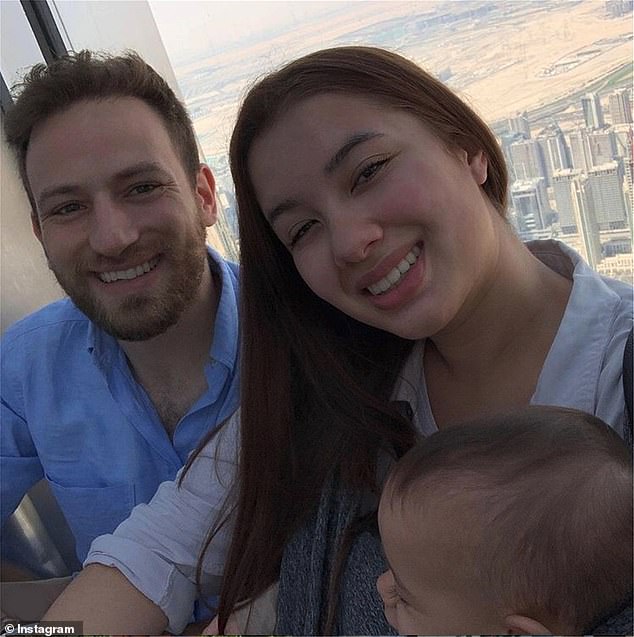 Caroline was killed at her home in Athens, Greece, that she shared with husband Babis Anagnostopoulos and their infant daughter Lydia

Babis, who saw the attackers, will tomorrow be shown mug-shots of 30 suspects thought be involved in his wife’s murder.

Officers have linked 12 break-ins in the past six months around the Greek capital which involved some 30 known criminals to the 20-year-old Briton’s murder.

An Albanian organised crime group comprising of Roma and other nationalities is believed to be behind the break-in and the murder.

Tomorrow detectives will show mug-shots of known criminals to heart-broken widower Charalambos Anagnostopoulos, known as Babis, who saw the face of his 20-year-old wife’s killer.

The helicopter pilot, known as Babis, caught a glimpse of the man as he leapt on to the bed where he was sleeping with wife Caroline to stop her screaming.

The killer had been wearing a motorcycle balaclava to hide his identity. But the face covering slipped down while he was struggling with the 20-year-old British mother.

Babis has described the assassin as being tall, dark-skinned, overweight and under 30.

A police source told Mega TV: ‘We suspect that three members of the gang went into the house and one member waited outside as a look-out.

‘We believe that the killer felt compelled to murder Caroline because she had seen his face and would identify him to the police.

‘But they spared husband Babis because they thought he was unconscious and unable to see.’

It is also thought it possible the attacker killed Caroline, a black belt kickboxer, because she fought back. 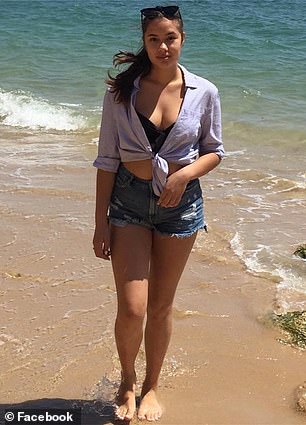 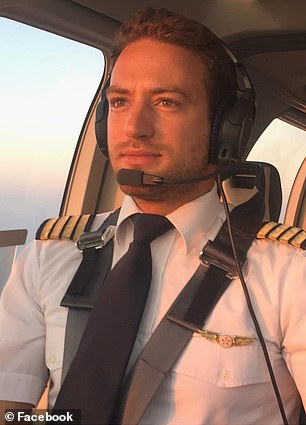 Police say a gang of burglars broke into Caroline (left) and Babis’s (right) home, tied him up, tortured and killed her, then stole £33,000 in cash and jewellery and fled

A source close to the investigation told the Sun attackers could have ‘taken fright’ at the violent struggle Caroline put up before she was strangled to death.

He said: ‘the DNA we now have may provide the answers.’

Babis was asleep at his home near Athens alongside wife Caroline, a student, and their 11-month-old daughter when a gang of thieves broke in around 4:30am on Tuesday.

Investigators say the gang approached the couple’s house and broke a security camera outside.

They then removed security pins from a basement window and climbed inside the property, where they found the family’s dog downstairs. Police say the husky was strangled using its own leash before its body was hanged from a stair banister.

Babis told the police the masked raiders – armed with handguns – then tied him up on the floor and tied Caroline to the bed before demanding ‘where’s the money?’ in broken Greek.

He said the couple had a large amount of cash at home because they had recently bought a plot of land and needed to pay builders for work, and he revealed his hiding spot – inside a Monopoly box – quickly in order to spare his loved ones being tortured.

But the thieves demanded more money and jewellery, then pointed a gun at his infant daughter’s temple before suffocating Caroline when she started screaming, according to Greek media. 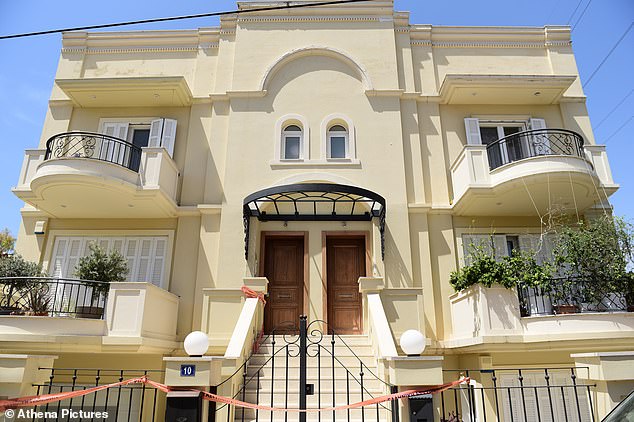 Police have described the crime as the ‘most heinous’ they have ever investigated, and say it was carried out with a ‘brutality’ that is rare in Greece. Pictured: the house (right) where the murder took place 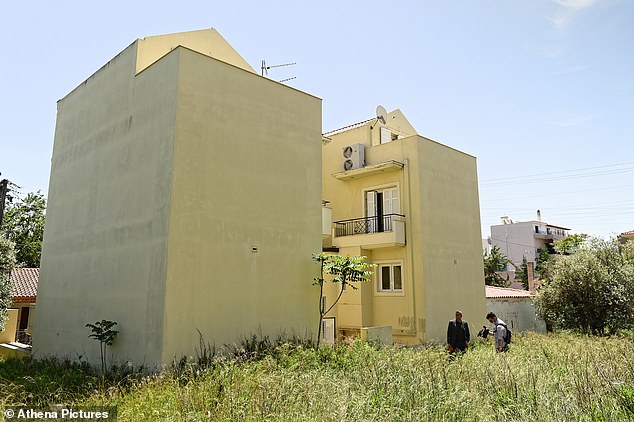 Investigators say Tuesday’s raid began around 4.30am when the gang approached the couple’s house (pictured) and broke a security camera outside 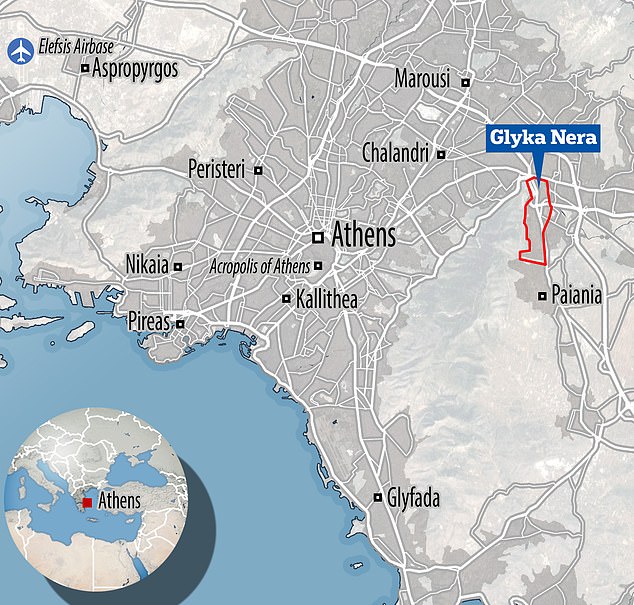 Police say hooded men broke into the home in the Glyka Nera suburb while one stood guard, strangled the family dog, tied up the husband, then tortured and suffocated his wife

‘I heard my wife screaming for help tied to the bed while I was tied to the floor,’ Babis is said to have told police. ‘We screamed not to be hurt.

‘The baby was crying, my wife was crying and someone or some people were looking for the house to find more money and jewelry. Suddenly they left the room and I couldn’t hear my wife’s voice anymore.’

Speaking to Greek TV outside the family home later the same day, Babis added: ‘I wish no one ever goes through what we went through last night. It was a nightmare.

‘We begged the thieves not to harm us. We told them where the money was and asked them to leave us alone. The police will catch them.’

Police were called to the scene by Babis, who managed to get to a phone and dial the emergency number with his nose.

Police have described the crime as the ‘most heinous’ they have ever investigated, and say it was carried out with a ‘brutality’ that is rare in Greece.

A £250,000 reward for information has been offered, and investigators are thought to be working on the theory that the gang was well organised, likely surveilled the couple before the raid, and somehow knew they were keeping a large amount of cash at home.

Caroline was laid to rest yesterday on the island of Alonnisos, where she spent most of her childhood. 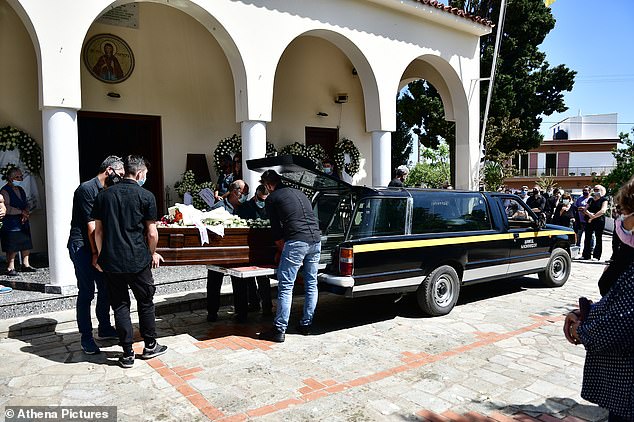 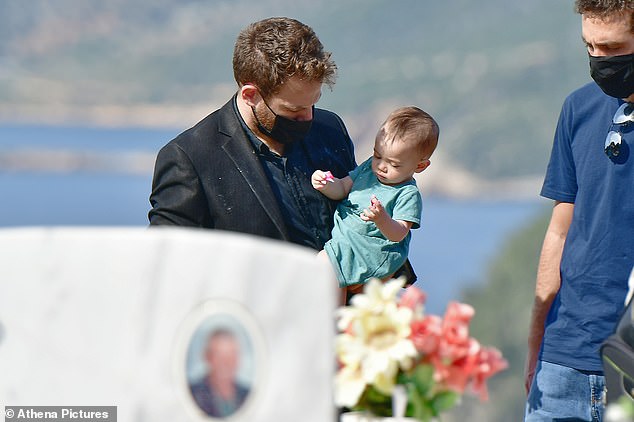 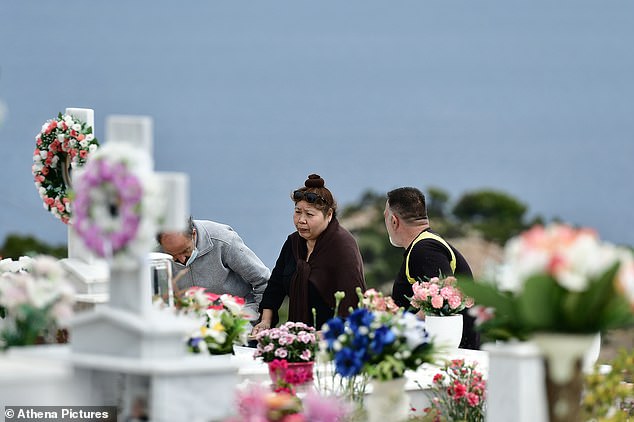 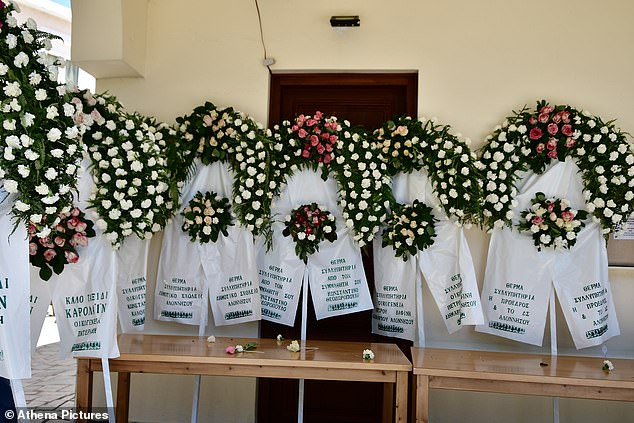