Police recorded a ‘hate incident’ against a retired teacher who wrote a ‘polite’ letter to a campaigner defending a mother’s right to abort a baby with Down’s syndrome.

Douglas Kedge, 85, penned a letter to a woman protesting about an episode of Emmerdale in which a couple decided to terminate a pregnancy after the baby was diagnosed with the genetic disorder.

He wrote that although he understood some may regard having a child with Down’s syndrome as a ‘great privilege and joy’, there are other ‘perfectly decent people’ who may wish to avoid ‘what could well be for them an appalling change in their lives’.

According to the Times, he added: ‘You disgracefully suggest that the reason for the inclusion of this situation in the script is a deliberate attempt to perpetuate prejudice against Down’s syndrome children.’

Former parish council chairman Mr Kedge later received a call from Thames Valley Police to inform him that a record had been made of his involvement in a ‘non-crime hate incident’.

Despite this, officers accepted that the letter was ‘very politely written’.

It followed a complaint by Rachel Mewes, from Northumberland, who had received Mr Kedge’s letter in response to a comment she made in the Times last November. Police have branded a letter from Douglas Kedge (pictured), an 85-year-old retired teacher, which defended parents’ right to abort a baby with Down’s syndrome as a ‘hate incident’ Police recorded a ‘hate incident’ against a retired teacher who wrote a ‘polite’ letter to a campaigner defending a mother’s right to abort a baby with Down’s syndrome. Pictured: Home Secretary Priti Patel Douglas Kedge, 85, penned a letter to a women protesting an episode of Emmerdale (above) in which a couple decided to terminate a pregnancy after the baby was diagnosed

She had alleged that the note amounted to a hate crime, according to the Henley Standard.

Non-crime hate incidents involve reports of ‘hostility towards religion, race or transgender identity’ that are not classed as a crime.

Even if police find no evidence that a crime has been committed, if anyone believes the incident was motivated by hate then officers are obliged to make a record.

These records, which stay on the system for six years, can show up on enhanced DBS checks.

And they could ultimately jeopardise a person’s career, even though the individual was not found guilty of, or even charged with, a hate crime.

Earlier this year it was revealed how police have recorded non-crime hate incidents against more than 120,000 people – 2,000 of which were against children.

Priti Patel said in April that allegations of hate incidents should be wiped from an individual’s record if no crime is found to have been committed.

The Home Secretary has written to the College of Policing asking it to look into procedures regarding ‘non-crime hate incidents’, The Sunday Telegraph reported.

Mr Kedge has warned current rules on non-crime hate incidents could have a ‘chilling effect’ on freedom of speech, adding the entire situation seemed to be a ‘sheer waste of police time’. 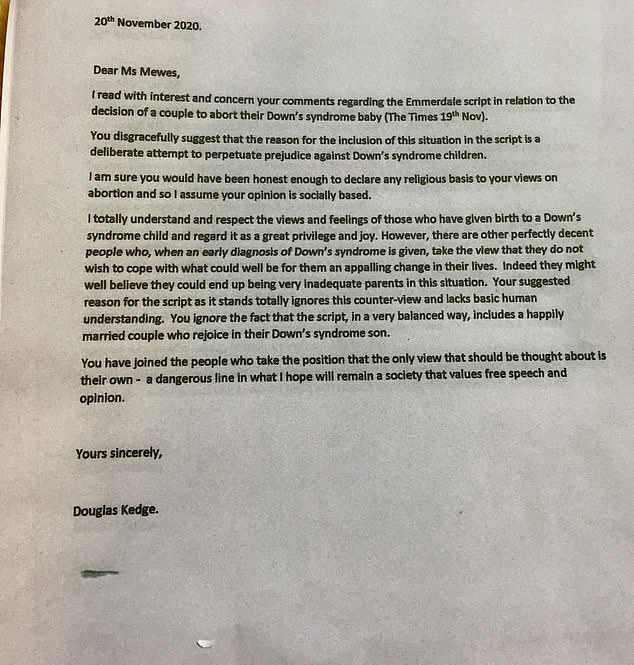 Pictured: A copy of report written by the investigating officer after the complaint was made 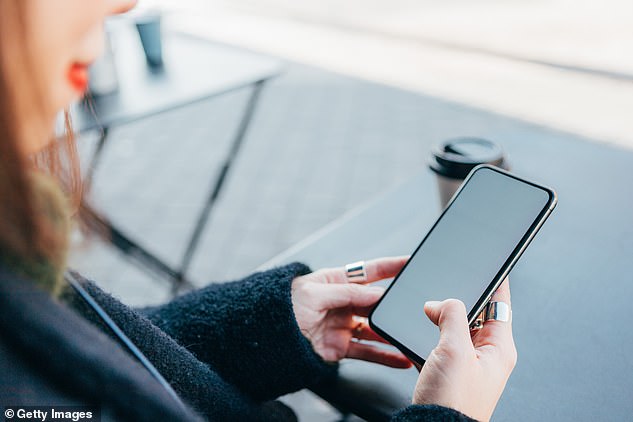 More than 120,000 people had non-crime hate incidents recorded against them last year

He said: ‘I’ve lived a fairly righteous life so to end up with a police record is appalling.’

The retired teacher, who plans to volunteer at a school in Sonning Common, near Reading, is also concerned that the incident may appear on Disclosure and Barring Service (DBS) checks.

He previously explained how he wrote to Ms Mewes following controversy over an episode of Emmerdale.

It had followed characters Laurel Thomas and Jai Sharma, who were planning to abort their unborn baby after being told by doctors that the child had Down’s syndrome.

Some 265 complaints were made to Ofcom following the episode.

Ms Mewes had claimed in a letter to the Times that the plot was an attempt to perpetuate prejudice against Down’s syndrome children.

What is a non-crime hate incident?

The College of Policing – the police’s professional body – say that not every reported hate crime incident is a crime.

But they say reported incidents should be to establish if an incident is a hate crime or a non-crime hate incident.

If police cannot find evidence of a crime, but if a person or any other person perceives that a person’s actions were motivated wholly or partly by hostility, then the College of Policing say the incident should be recorded as a non-crime hate incident.

The college accepts there may be an ‘overlap’ between a perceived non-crime hate incident and the legitimate right to free speech.

The scheme, introduced in 2014 following recommendations by the independent Macpherson Inquiry into the murder of Stephen Lawrence, includes a system of police reporting.

Police say the system is primarily to help preventive activity to take place, and to monitor potential community tensions.

But the reporting system has proved controversial – because these reports can be found on the system for up to six years through an enhanced DBS check.

This can potentially put a person’s career in jeopardy, even though they have not been charged or found guilty of a crime.

According to the College of Policing, the incidents will only show up on an enhanced DBS check if it is relevant to the job and is approved by a chief officer.

Assistant Chief Constable Iain Raphael, from the College of Policing, told the Telegraph: ‘Under separate Home Office rules, chief officers must also consider allowing someone the opportunity to reply before information is disclosed, and it should not be disclosed if it is trivial, simply demonstrates poor behaviour or relates merely to an individual’s lifestyle.’

However, Mr Kedge responded that this was ‘nonsense’ after finding her address.

The retired teacher later called for an ‘urgent and radical overhaul’ of the non-crime hate incident policy.

Critics of the policy, which was introduced in College of Policing guidance last year, have highlighted the impact on people’s freedom of speech, as well as the use of police resources in pursuing such allegations.

‘If people are found to have done nothing wrong the police shouldn’t punish them.’

Tom Hunt, Member of Parliament for Ipswich, previously told MailOnline: ‘I think the whole thing is scandalous and I think that it makes a mockery of the system.

‘If you are going to start registering incidents next to people’s names then you need to be sure that you have reasonable evidence that shows they are guilty.

‘I also think it could have a chilling impact on free speech if a young person or an adult feels afraid to speak out.

‘Because if a left-wing activist decides to take them to the police accusing them of hate – even though they haven’t done that – that alone means it could go down on their record.’

He added: ‘I think it needs to change.’

Meanwhile The Free Speech Union also criticised the the policy. General secretary Toby Young said: ‘Non-Crime Hate Incidents are an invention of the College of Policing, an unelected body.

‘They have never been approved by Parliament, there is no legal threshold or independent evidentiary test applied to them and members of the public have no right of appeal against them.

‘Indeed, a member of the public can have a Non-Crime Hate Incident recorded against their name without ever being informed of the fact.

‘In some cases, NCHIs are recorded against a person’s name without their knowledge and are only picked up years later when an employer carries out a background check on them.

‘This means that a young person training to be an NHS nurse or teacher could be turned down for a job because of a joke they made in the playground as a 12 year-old.’

Her comments came during the case of former police officer Harry Miller, who had a hate incident placed on his record after he posted a number of tweets about transgender issues.

His posts were reported to the police as being allegedly transphobic.

Mr Miller, a former police officer and founder of Fair Cop argued that the guidance was unlawful and stopped freedom of expression.

However senior officers have insisted it helps them ‘measure tensions effectively and to prevent serious hostility and violence’.

Paul Gianassi, the hate crime adviser for the National Police Chiefs’ Council, also argued that non-crime hate incidents may be the starting point in an escalating process of ‘dehumanisation and ultimately murder’.

Non-crime hate incident reports were introduced in 2014 following recommendations by the independent Macpherson Inquiry into the murder of Stephen Lawrence.

Asst Chief Constable Iain Raphael, of the College of Policing, said the guidance would be reviewed, but this would need to be balanced against those it is intended to help protect.

He added: ‘Hate crime can have serious consequences and it is vital the police have the right tools to help them protect the public.’