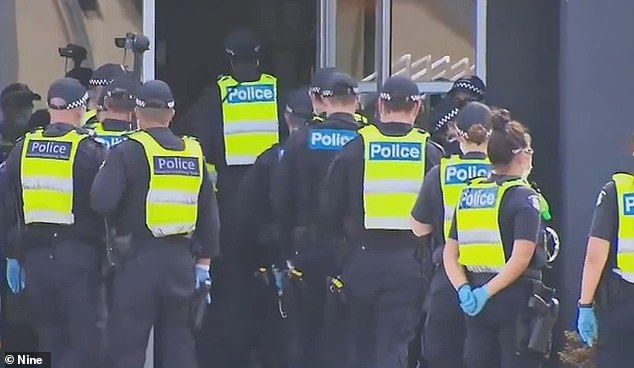 Dozens of police have stormed a Melbourne gym that broke lockdown laws by letting 175 maskless people in to train.

Officers were seen swarming Al’s Gym in Campbellfield in the city’s north on Tuesday.

The gym was open despite all fitness facilities being ordered to close during Victoria’s snap five-day lockdown that was sparked over a growing cluster at the Holiday Inn quarantine hotel.

‘We can’t afford to close the gym so we’ve been trading as per normal during the lockdown,’ Al Pope, co-owner of the gym, told 9News.

He also said, according to the publication, that no masks were worn.

‘Today the police came in numbers and closed us down and arrested my partner.

‘I did a hard year last year, I was closed for seven months. I’m in quite a bit of debt with my landlord and I simply can’t afford to close.’

Police forced the 175 members out of the gym after patrons refused to leave.

Mr Pope said that despite police issuing him with a fine, he has no intention of paying up.

One of his customers slammed police for shutting down the gym, saying Mr Pope kept its doors open to keep food on the table for his family.

Under current lockdown rules, businesses face fines of up to $10,000.

‘As part of Operation Sentinel patrols, police attended a gym on City Road this afternoon following reports the gym was in operation and in breach of the directions issued by the Chief Health Officer,’ Victoria Police said in a statement.

‘Three men were arrested at the scene all of which will be issued penalty notices in relation to breaching CHO directions.’

Gym owner Al Pope said despite police issuing him with a fine, he has no intention of paying up

The statewide lockdown was called on Friday afternoon amid fears the highly-infectious UK strain of the virus would spread within the community after escaping the hotel.

It is scheduled to end at 11:59pm on Wednesday.