A Metropolitan Police officer accused of turning off his bodycam to attack a suspect is cleared of assault after claiming the man threatened to rape his girlfriend and made a reference to a colleague who was killed in a police station six weeks earlier.

PC Ian Smellie, 64, told colleagues ‘cameras off’ as he removed his police vest and ushered Rafik Miah around the corner at the end of a car stop in Stoke Newington, north London on November 10 last year.

The officer was accused of telling Mr Miah, 34, ‘you think you are a big man’ before allegedly raising his arm to give him a ‘clip round the ear’ as six officers searched the suspect for drugs.

PC Smellie, who has since retired from the force, denied common assault and insisted that he acted in self-defence during the incident, City of London Magistrates Court heard.

Today he told the court that Mr Miah had threatened to rape his partner and made a comment about having a weapon six weeks after police officer Matt Ratana was shot dead at a Croydon police station last year.

PC Smellie was later cleared of assault as Judge Sam Goozee said: ‘Mr Miah was handcuffed during the process; he was abusive and rude.

‘The search was negative but even after Mr Miah continued to be abusive and resentful. You and your officers remained calm throughout the process.’

Mr Miah had continued to make comments, calling the officer an ‘ugly piece of s**t’ whilst he constantly referred to PC Kirsty Thatcher as a ‘b***h’.

Judge Goozee added: ‘His comments were resentful, childish and unnecessary. There was no evidence that Mr Smellie was in any way angry, the body worn footage shows him calm throughout.

‘There is simply no clear picture about what happened between Mr Smellie and Mr Miah on Kyverdale road.’

Mr Miah claimed the officer punched him in the face causing him to have a ‘sore red ear’ on the left hand side. Judge Goozee added: ‘Mr Miah’s account seemed exaggerated. 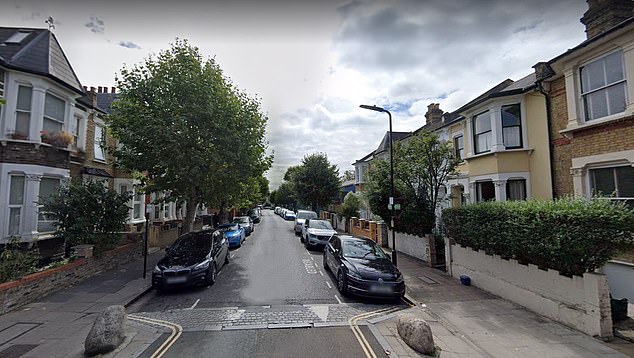 Mr Miah was arrested in Kyverdale Road, Stoke Newington, north London, on November 10 last year, under section 23 of the Misuse of Drugs Act. He was subsequently released without charge

‘Mr Miah while he gave evidence was clear that he had been punched on the left-hand side of his head and on two occasions when showing this he showed his right-hand side.

‘When asked why he didn’t report this to the other officers he said they had all gone, but then he said that they were there and laughing. This concerns me.

‘The whole incident and exchange appears odd, unusual, bizarre, strange, to quote officers from their evidence. But none of them observed anything that caused them to intervene.

‘It may well have been a very unwise decision from Mr Smellie to take off his vest and camera and walk Mr Miah to Kyverdale Road.

‘These actions by themselves may appear suspicious but this is not one of those cases where piecing together all the evidence may lead me to the inevitable conclusion that Mr Miah was deliberately punched by Mr Smellie.

‘The prosecution has not proven their case that Mr Smellie deliberately punched Mr Miah and I therefore find him not guilty.’

PC Smellie told the court: ‘It started off quite mundane, he seemed to escalate and get worse and worse, he addressed PC Thatcher as a b***h before he threatened to rape my partner.’

He added: ‘He made one remark along the lines of ‘if you take me to the police station you will find a big weapon’. That struck a chord because of what happened with Mr Ratana, I thought he was referencing that incident.’

‘We’re similar, we’re both big chaps, like our rugby and are retiring soon.’

Police Sergeant Ratana, 54, had been shot dead by a suspect who smuggled a gun inside Croydon Custody Centre some six weeks earlier.

PC Smellie described himself as a friend of PS Ratana and said: ‘The death of any colleague is traumatic, a colleague that you know is even more so.

‘I think I did a fairly good job of masking it, but I was taking aback by the remark, I was affected by it more than I thought I would be. 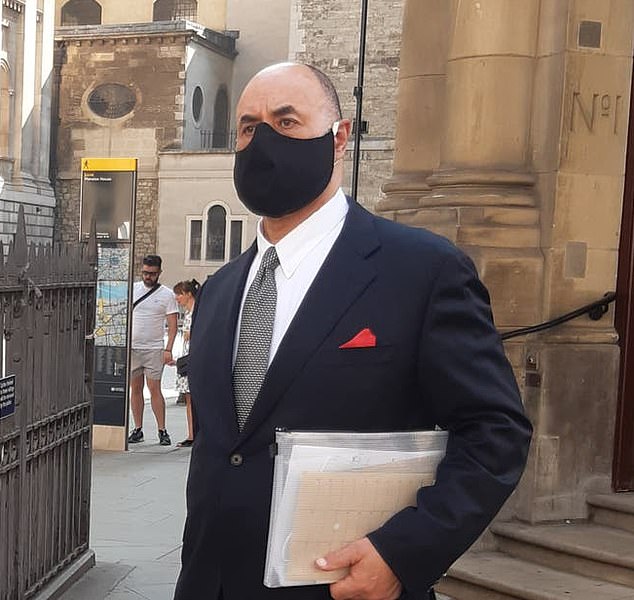 PC Ian Smellie, 64, told colleagues ‘cameras off’ as he removed his police vest and ushered Rafik Miah around the corner at the end of a car stop in Stoke Newington, north London on November 10 last year

‘I turned to where Mr Miah was standing, I don’t recall him saying anything to me, but he gestured to me.

‘I walked over to him, I thought I’d take the advantage of trying to ask him why he thought that behaviour was acceptable.

‘I thought I’ll take the time to speak to him and perhaps that will stop him behaving like that in the future.

‘As we got to the corner, he took a swing at me. My movement was an instinctive reaction with my right arm, like a hand off in rugby.

‘Mr Miah attempted to strike me, I stopped him using the minimum amount of force needed.’

Mr Miah admitted he was abusive and swore at PC Smellie as he was searched. He claimed after he was released from his handcuffs the police officer took up a ‘fighting position’ and hit him in the face.

‘I felt a bit annoyed because they kept doing it (pulling him over) constantly. It was a bit rude of me, a bit out of order because I kept getting pulled over,’ Mr Miah said.

‘I was using swear words, I was being a bit abusive.’

His handcuffs were removed and PC Smellie allegedly told colleagues to turn their ‘cameras off’, the court heard.

Mr Miah said the officer then took him around the corner onto Kyverdale Road and attacked him.

‘I was just a bit shocked when he took me by the wrist,’ he said. ‘I knew something was going to happen because he took off his vest as well.

‘I didn’t want to go with him. ‘He went for a punch, I managed to block it, I took some photos. He got into the fighting position and then swung for me.’

He claimed the punch to the left side of his face left him with a red mark and a sore ear. Mr Miah added: ‘I thought the other officers might get involved. I was scared for my life. I tried to block it, that was my only reaction.’

Mr Miah admitted telling police: ‘Strip search me, you might find something’. He said: ‘I wanted to get them annoyed and waste their time because they wasted my time.’

PC Smellie thanked the judge as he walked from the dock.

Nicole Kidman's most daring fashion from suits to dresses.. some changed the rules of fashion