POOKY QUESNEL: The ache of playing a mother on TV when I cannot have children of my own


The ladies’ loos in a supermarket is an odd place to have an unexpected emotional encounter; but I did. And it’s one that will stay with me for ever.

As I washed my hands, I heard hysterical laughter from one of the cubicles, which abruptly switched to stunned silence — then three teenage girls shuffled out. One of them held out a pregnancy test and asked me if I thought it was positive.

I stared down at the flamingo pink cross glaring up at me. Then she suddenly asked whether I had children. I remember thinking: ‘What are the odds of this happening to me now? If I wrote about it, no one would believe me.’ 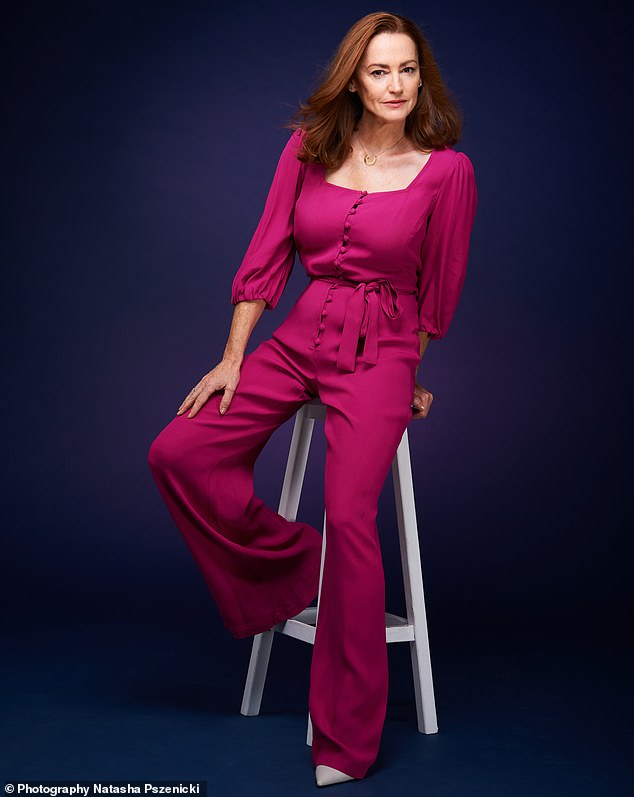 All of the week before, I had been really excited because — yes! — my period was late. But it had literally just started.

So I was facing the slow-dawning reality that as I had met my partner in my 40s, the reason for the ‘lateness’ was the start of menopause and that it was physically too late, a miracle wasn’t going to happen: I was never going to have children.

As I gently told her that, yes, the test was positive, and saw her face crumple in distress, it struck me how one person’s nightmare can be another’s dream.

How in our youth we take the fact that we will have children as a certainty, even a right. How for so many years getting pregnant is the enemy. Then one day, for whatever reason, for so many of us it suddenly reverses and becomes a desire that is all-consuming.

And here I was sharing this intimate moment with a stranger, who was reaching out to me — almost as a mother. 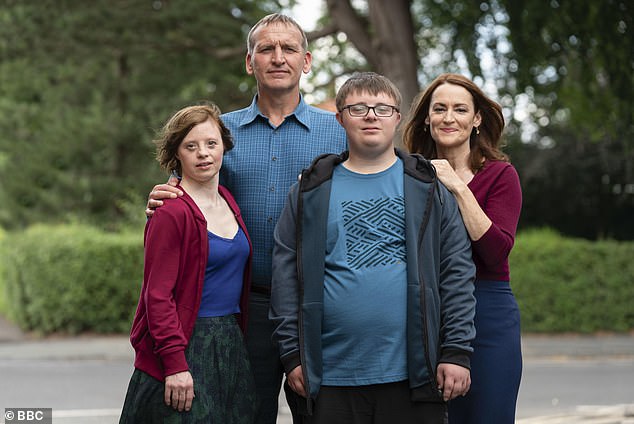 During lockdown, Pooky created a monologue which she shared online about her experiences in the toilet with a teenager who had just found out she was pregnant. Pictured: Pooky playing role of Louise in BBC drama The A Word with fellow cast members Christopher Eccleston, Leon Harrop and Sarah Gordy

It’s a role I have played on screen many times; I’m an actress best known for playing Louise, the mother of Ralph, a young man with Down’s syndrome, in BBC drama The A Word.

When Covid closed down the entertainment industry in March, I was playing Martha in Who’s Afraid Of Virginia Woolf?, which explores the destructive games a couple play because they find it so impossible to talk about the fact they have no children.

So when the theatre closed overnight, those issues were alive in my head. I sat down to write something and my encounter in the loos tumbled out.

When I posted the monologue online, with the title Empty, I wasn’t sure if people would stick with it, as it’s a slow-burner.

But I’ve been overwhelmed by the response from women and men. It’s now had thousands of views on YouTube and dozens of comments.

People have thanked me for broaching the shame, pain and blame around not having children. Some have no kids, some had a difficult fertility journey, some are frightened they will never have children, but all said they’ve noticed how little people want to talk about it. 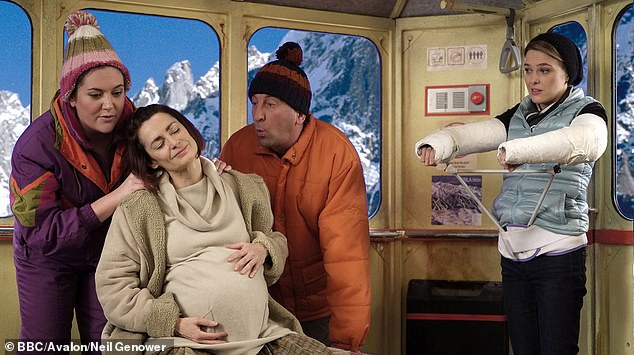 After she had just realised she was not pregnant, because her late period had just started, Pooky was downhearted and soon learned she had started the menopause and would be unable to have children. Pictured: Pooky playing a pregnant mother in an episode of Not Going Out in 2013

Not everything in the monologue is quite how it was in real life, of course, but it’s absolutely true that after meeting that young girl, I ended up wandering through the veg aisles with tears rolling down my cheeks.

Whether it’s due to infertility, same-sex relationships, timing or even a positive choice, there’s still a stigma around ‘childlessness’. Even the word implies judgment. Why not ‘child-freeness’? Or ‘MoreTimeForYourLifeness’?

Seeing so many mothers struggling with educating their children during lockdown, often while juggling full-time jobs, was a reminder that not having children has huge bonuses. But there’s an embarrassment, a sense of blame, of failure, even of ‘unnaturalness’ about a woman who is not a mother.

Perhaps we find it so difficult to talk about because we find other people’s pain frightening. We don’t know what to do, so we do nothing. After all, we spend enough of our lives avoiding our own pain.

As an actor, I often find it easier to portray a character’s distress than to feel my own. I also think that’s why we’re drawn to watching tough situations played out in dramas — as long as we’re safely behind the protection of a screen.

Now in my 50s, I’m part of the post-feminism generation that was told a woman can have a career and, if she has trouble conceiving later, no worries — the doctors will sort her out. 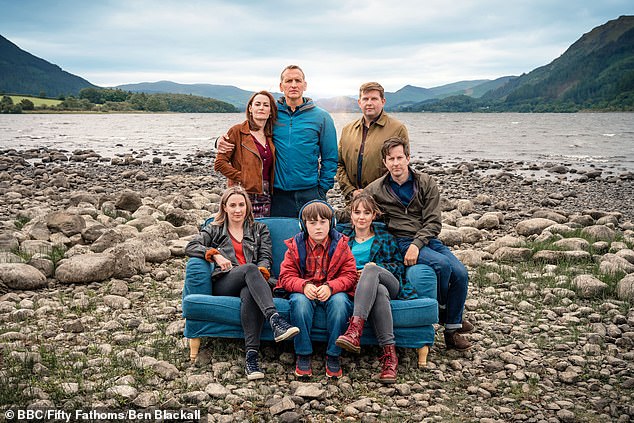 Because she met her partner in her 40s, they did not start trying for children until later than most and unfortunately their hopes were jaded when she started the menopause. Pictured, Pooky, top left, and the cast of The A Word

It somehow wasn’t quite so widely broadcast that the IVF success rate is 23 per cent between the ages of 35-37, 9 per cent between 40-42 and pretty much game over past 44. (IVF is a lucrative business for private practitioners. Why would they?)

We’re also precisely the generation born in the 1960s of whom, the Office for National Statistics revealed recently, one in five women did not have children by the age of 50 — leading to fears of a looming crisis in elderly care.

We’re as unlikely to have children as the generation born in the 1920s, who suffered the upheaval and loss of World War II. 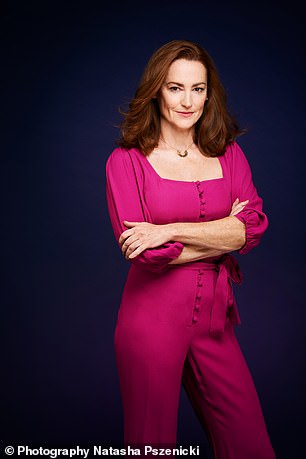 Pooky, pictured, said she received an overwhelming response to her monologue from both men and women

Of course, this is far from just a ‘women’s problem’. According to one Nuffield Health survey from 2016, 52 per cent of men reported being too embarrassed to talk about fertility issues with their partner, and 46 per cent wouldn’t even talk to their GP, which can lead to couples seeking help too late. Almost half of men did not realise the effects of age and lifestyle on their own fertility.

Meanwhile, my voluntarily childless friends say the reactions they get range from concerned incomprehension to outright aggression. Let’s be clear, you don’t have to have a child to be happy and fulfilled, but childlessness can carry a river of pain.

For me it wasn’t a huge trauma or debilitating thing. It was a daily ache that, like any other grief, would peak at certain moments and which, over time, needed to be processed and released.

That pain is not an illness, or defect, or anything to be ashamed of — it simply is grief for the children that are somehow still inside you, in your DNA.

It’s grief for the sleep that wasn’t lost. The hands that weren’t held. The first steps that were never taken. For the children you always thought you’d have. Grief that you will never see the essence of the person you love mingled with yours in another being.

Everyone’s experience of it is different, but if we can’t talk about childlessness easily and openly, how can the heartache be healed?

I’m a good listener, but I realise I have to be careful that it’s not a way of avoiding my own difficult feelings. It was only while talking about the ‘girl in the loos’ with my close friends that I finally started to face the reality of my situation. 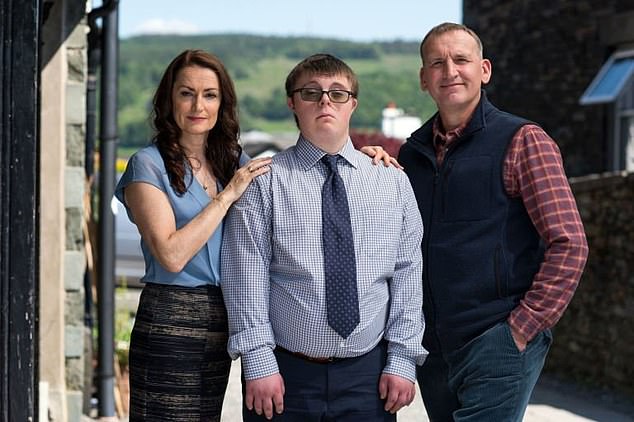 The actress believes people should talk about childlessness openly and honestly to help people deal with the idea and heal their heartache. Pictured, Pooky with The A Word co-stars Christopher Eccleston and Leon Harrop

I’m happy now with the way my life is, and I cherish the time I spend with friends’ and family’s children. Not being a parent, I can relate to them more as a child.

Yes, I’m one of those annoying people who has a wild time playing with your kids, and then hands them over totally hyper and overtired. It’s wonderful to be with them. But it’s also nice to be able to give them back.

The ache does return sometimes, but in the end it’s about love; the love you wanted to give. And there are plenty of ways to share that.

The moment the girl in the loo showed me her positive pregnancy test was vividly painful. I knew, in that moment, that it was something I’d never experience for myself. But it was also a reality check. It helped me reach acceptance. Long afterwards, it feels almost like a blessing in disguise.

So if my account helps people in any way to understand it in others, or to process it for themselves, and to talk a little more, then I’m happy to share it.

I often wonder what happened to that girl at the supermarket. What choice she made — whether she went ahead with the pregnancy or had a termination. Whether she’s a mother now.