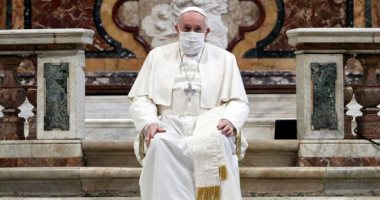 Argentine newspaper “Telam” revealed that the Pope of the Vatican, Pope Francis, will be the first to receive the Corona vaccine, which will reach the Vatican on January 4.

On the other hand, and in particular, the Pope and Honorary Pope could be the first to stand in line because they are vulnerable residents, as Pope Francis is 84 years old and suffers from many diseases that were delayed by the sciatica that prevented him from attending New Year’s celebrations. The Argentine Pope also restored the schedule of his personal meetings in Santa Marta in the Apostolic Palaces and his repeated efforts to restore the general masses with the believers seeking physical contact with them.

The newspaper pointed out that the body responsible for organizing the vaccination is the Health Assistance Fund, which works in cooperation with the Health and Hygiene Directorate in the province, in total, 800 people living in the Vatican are scheduled to be vaccinated, in addition to 4000 active and retired workers..

And the Vatican announced yesterday that Pope Francis will not preside over the rituals of the end and beginning of the year due to his infection of sciatica..

Matteo Bruni, director of the Holy See Press House, reported the agonizing obstacle which forced the Holy Father to take a rest. Thus Cardinal Rey will preside over the celebration of the Vespers this afternoon, while Cardinal Parolin will preside over the Mass on January 1st. Provided that tomorrow the Supreme Pontiff will recite the Angelus prayer from the Apostolic Palace.

Intense pain and awareness of his inability to be on the altar to conclude the year 2020 with the recitation of the sunset prayers and the prayer of thanksgiving and the opening of the year 2021 with the Divine Mass on the occasion of the Virgin Mary and International Day of Peace – with the exception of the evangelization prayer that will be recited by the Holy Father himself.

Houston Rockets ask Eric Gordon to stay with them

Barcelona, ​​Real Madrid and Bilbao are appealing against the La Liga agreement with the Investment Fund