Verdict: Sweet music to your ears

An actual functioning  ski slope must be a first on the British stage.

Yes, actors on skis slalom across the Donmar’s boards in an impressively ambitious adaptation of the Ruben Ostlund film Force Majeure — the one about a family holiday in the French Alps which goes awry after a traumatic encounter with a supposedly ‘controlled’ avalanche.

The play features Rory Kinnear and Lyndsey Marshal as a couple whose marriage is going downhill, fast, but the real star of the show is Jon Bausor’s set.

It’s a stunner, with snowy peaks looming over the dazzling dry ski slope, fitted on a precipitously angled stage. 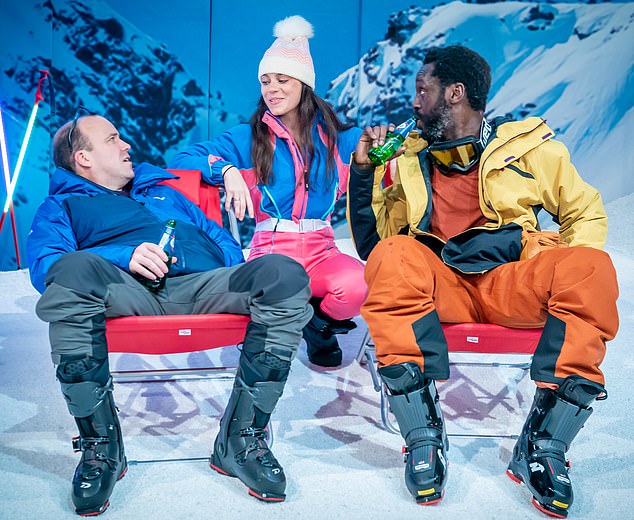 You’ve got to admire the brass neck of director Michael Longhurst in tackling this Alpine comedy-drama in such a tight space.

The only trouble is that Portrait of an icy couple sliding into the abyss It’s Friday! theatre when they bring on the café tables, I was more worried about wine glasses sliding off the sloping tops than I was about what was happening in the plot.

Tim Price’s adaptation is, nonetheless, a painfully uncomfortable anglicisation of the film.

Out goes Ostlund’s Scandinavian angst; in comes a more British tone of semicomic bitterness and resentment.

As in the film, the couple’s screen-obsessed children are miserably behaved; but that’s not balanced by a sense of tenderness towards them. Nor does there seem to be much love lost between Kinnear and Marshal, as their timid mum and dad.

And Marshal has the glacial, disappointed stare of a mother at the end of her tether, wondering if there will ever be a way out.

But while many couples will recognise these suffocated agonies, it doesn’t make their characters sympathetic. The fun lies elsewhere.

Like Siena Kelly and Sule Rimi, as friends still flushed with the joys of new love.

Or Nathalie Armin’s married, Bond-girl style predator, bedding hot Italians by the pair. But, arguably, the show stealer is Rafaello Degruttola, as the silent hotel cleaner, walking in on awkward moments with his Hoover in tow.

There’s also something cathartic about the couples’ pathetic squabbles: it makes you realise all those haughty silences and avoidance strategies are a dismal waste of time.

All the same, I wish ­Longhurst’s production had dug deeper into the characters, rather than trying to seduce with his admittedly very striking Ski Sunday staging

In the summer of 1903, he stumbles on her while staying in a Somerset vicarage, where she sings songs learnt from her recently dead mother.

Overcome with excitement, he is desperate to preserve the songs and forge a sense of English musical identity. She, on the other hand, is more anxious to share her long suppressed musical passion. 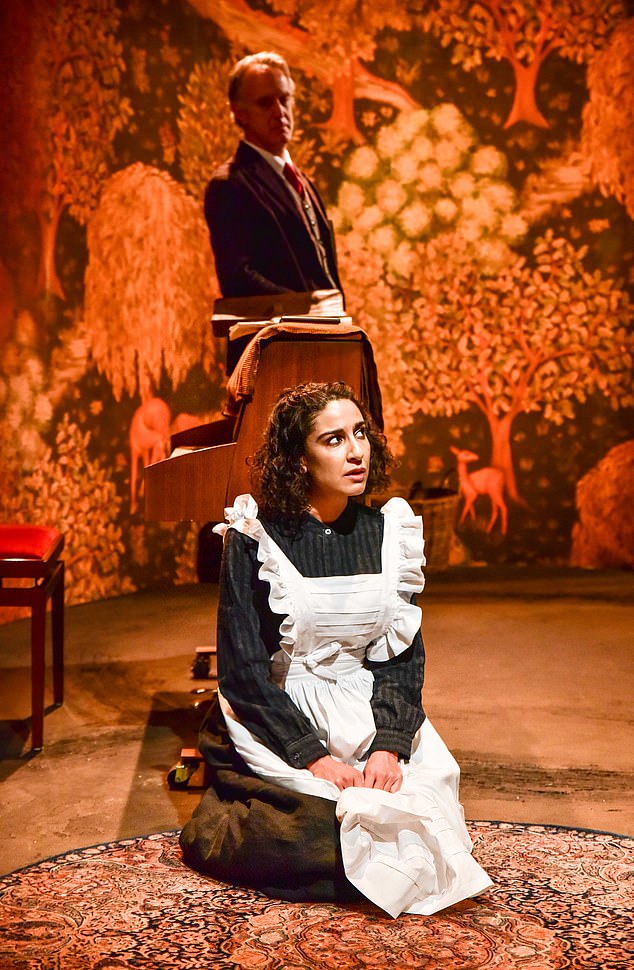 And Roxana Silbert’s production is pretty as a picture, thanks to Rose Revitt’s’ William Morris-inspired Arts and Crafts design.

That, though, comes second to Mariam Haque’s hypnotic performance as Louie, the naturally gifted young singer who is starstruck by Sharp.

Her lovely voice persuades us of Sharp’s delight in her, but she acts with intensity, too: her face streaked with tears when she fears she is being betrayed by her mentor.

As for Simon Robson in that role, it’s as if an avuncular Stephen Fry had stumbled into the vicarage and started tickling the ivories — while remaining sweetly in awe of Louie’s god-given talent.

BEST SEAT IN THE HOUSE – INTO THE NIGHT

It records the bravery of RNLI volunteers in a storm off Land’s End in 1981. £18, from Wed to Feb 20 originaltheatreonline.com

Banned until the ’60s, this musical must be seen

‘One of the most loathsome, depraved and diseased plays I’ve ever read,’ said the offended reader.

Such moralists would be surprised to discover that in Rupert Goold’s stunning revival of Steven Sater and Duncan Sheik’s 2006 multi-award-winning rock opera, it is the adults who look loathsome and depraved. 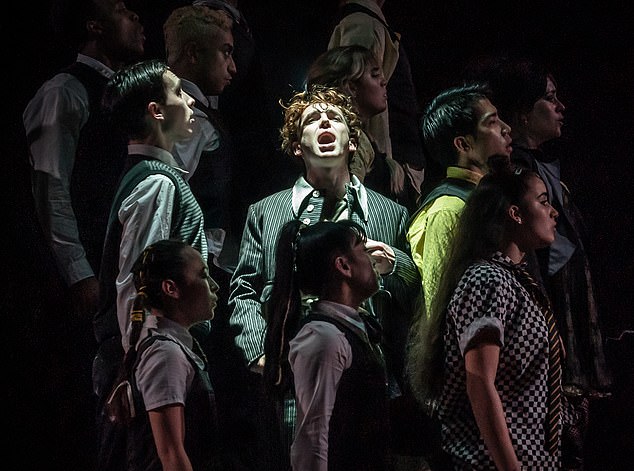 The embarrassment of a mother insisting that a stork is responsible for babies is as unforgivably ugly as a father beating his daughter for her disturbing beauty.

The fresh-faced young, open and impressionable demonstrate a deep sensitivity to their own feelings and to bigger world issues.

And in a key change to the original, Sater has made Melchior’s date rape of the innocent Wendla in the hayloft into a tender love affair, exquisitely caught in Sheik’s song I Believe. In a conventional musical, the music pushes the story forward.

Here, it creates an intense emotional subtext in which the young express the inexpressible in furious, pulsing anthems such as ‘Totally F****d’ or moving, angst-filled ballads, best of all, ‘O, I’m gonna be wounded/I’m gonna be your wound’.

If lyrics linger longer than the melodies, in the moment, the music soars.

Miriam Buether’s inspired dark and doomy design of a steep rake of blackboard steps, tripling as school, forest and graveyard, also evokes the exhilarating ups and depressing downs of adolescence and the vulnerability and precariousness of youth.

Several scenes close with a character topsy-turvy, capturing how it feels to be young in a world turned upside down by a pandemic.

An astonishing cast of actors on the rise and those making their professional stage debut are all stars, injecting real urgency into the piece, making it a must-see before it ends its run on January 29.

One in five people try dentistry at home including pulling out their own TEETH amid staff crisis at surgeries, report showsReport reveals millions of Britons are missing out...

Video duration 04 minutes 16 seconds 04:16The ambiguity surrounding the nature of the UN proposals on Sudan continues, as well as the possibility that their negotiation will eventually...

Luckiest loser: How world No.150 is now at the top of the Australian Open draw as Djokovic deported

The luckiest loser in sport: How world No.150 is now bizarrely at the top of the Australian Open draw as Novak Djokovic is deported - and how he...

5 things: 16-year-old girl says she was raped by hundreds of men in India | Video