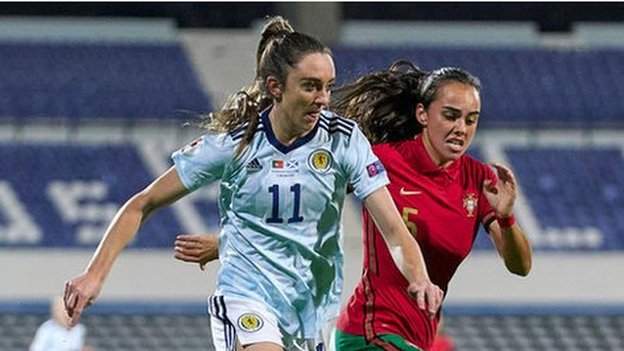 Scotland suffered another huge blow to their Women’s Euro 2022 qualification hopes after Portugal inflicted a second-straight defeat in Lisbon.

Both sides failed to make the most of their first-half chances before static defending allowed Ana Borges to net an unlikely second-half winner.

The Scots, without head coach Shelley Kerr who is self-isolating, were unable to make their late pressure count.

Scotland are third, four points behind Portugal and Finland.

The Finns, who defeated Scotland 1-0 last month, will host Kerr’s side in what is a must-win game in Group E game on Tuesday.

It was a game of great importance for the Scots but the preparation was far from ideal with boss Kerr told on Monday she had to self isolate following a Covid-19 outbreak with the men’s Under-21 squad.

Still, the Scots had the majority of possession early in the game, and they should have made their dominance count as Jen Beattie failed to divert a close-range header on target before Diana Silva spurned an effort at the other end by volleying straight at Lee Alexander from the edge of the box.

Erin Cuthbert then had a chance to test Patricia Morais in the Portugal goal after a lovely bit of skill to get into the box, but the Chelsea star lashed her effort wide of the near post before Kim Little curled over after a neat turn in the area.

Portugal began to dominate towards the end of the first half, and keeper Alexander breathed a sigh of relief as she spilled an effort from Silva before smothering a rebound effort from Claudia Neto.

The hosts started the second half on the front foot. Neto forced Alexander into a save before Scotland started to crank up the pressure as Kirsty Hanson’s cross from the left was almost diverted in off Silvia Rebelo.

However, it would be the hosts who opened the scoring as static defending from the Scots allowed Tatiana Pinto to clip a perfectly-timed ball in behind the visitors’ backline to Borges who finished low under the sprawling Alexander.

The Scots responded well as neat build-up in the area gave Hanson a sight of goal, but her strike was saved well by Morais before Martha Thomas forced the Portugal keeper into another close-range stop.

Beattie again failed to divert a header on target in the closing stages as the last real opening fell to Cuthbert, whose deflected strike was held well by Morias.

Scotland, who have qualified for the last two major tournaments, now have it all to do with three games remaining if they are to make it a hat-trick.

Scotland have it all to do in their quest to qualify for Euro 2022 as they welcome Group E leaders Finland to Easter Road on Tuesday (19:30 GMT).

Yorkshire Ripper ‘is cremated in secret ceremony with no relatives’

Yorkshire Ripper 'is cremated in secret ceremony with no relatives'