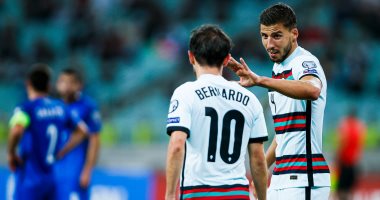 Portugal defeated its host Azerbaijan, 3-0, in the confrontation that took place between them this evening, Tuesday, at “Tawfik Bakhramov” Stadium, as part of the sixth round of European qualifiers for the 2022 World Cup in Qatar.

Bernardo Silva scored the lead for Portugal in the 26th minute of the match.

With this result, the Portuguese national team is temporarily at the top of the first group table with 13 points, 3 points ahead of Serbia, which has fallen to second place, while Azerbaijan’s balance is frozen at one point in the last place.

The Portuguese team is awaiting the result of the Serbian team with its Irish counterpart in the same ninth round, except for the quarter of this evening.

Portugal played a match with Azerbaijan without Cristiano Ronaldo, where he returned to Manchester United, after his participation in the victory of his country against its guest Ireland, by two goals against a goal.