Positive tie decides Seville vs Salzburg in the Champions League 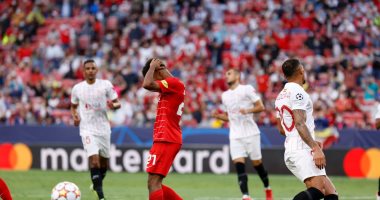 Sevilla and Austrian Salzburg tied 1-1 in the match that was held between them this evening at the Ramon Sanchez Pizjuan stadium in the first round of Group G of the Champions League.

In the first half, the Salzburg players managed to control its course greatly amid great suffering for the Sevilla defense, which caused three penalty kicks in favor of the first Austrian team, Karim Adeyemi missed in the 13th minute, and then Luka Susic managed to snatch the lead for Salzburg in the 21st minute before the player wasted himself Sosic Another penalty kick for the Austrian team in the 37th minute before Ivan Rakitic equalized the result in the 41st minute from a penalty kick.

In the second half, coach Julien Lopetegui tried to make some adjustments in the ranks of his team in an attempt to improve the offensive return of his team, but Youssef Al-Nasri was sent off in the 50th minute after receiving the second yellow card in the match. They had some dangerous attempts, but they missed the final touch, and the match ended in a positive 1-1 draw.

Irish couple celebrate their marriage by jumping into the sea in wedding clothes..video and photos

If you are underweight, add more than 500 calories to your meals per day

If you are underweight, add more than 500 calories to your meals per day