Postmen will soon be picking up parcels from our doorsteps at the same time as they deliver letters.

Households will be charged 72p per item on top of postage costs when they use Royal Mail‘s new Parcel Collect service.

It means online sellers and shoppers will be able to send or return items by post without leaving their home.

Royal Mail describes the service as ‘one of the biggest changes to the daily delivery since the launch of the post box in 1852’.

Royal Mail’s Parcel Collect service will see postmen pick up parcels from households at the same time as they deliver letters and will mean sellers can return items without leaving their homes. (Stock image)

It comes as the company tries to grab a bigger share of the booming parcels market.

But critics warn that the move could threaten the future of the local post office.

Customers can pay online or on the Royal Mail mobile phone app. They must print out a pre-paid label and stick it to the package, before leaving it on the doorstep or in a safe place.

Packages with a pre-paid return label can be collected for 60p per item.

The parcels can weigh up to 20kg (3st 2lb) and can be a little over twice the size of most aircraft hand luggage.

Customers will be able to get their parcels collected every day apart from Sundays. Bookings can be made up to midnight the night before so postmen know where to stop off before their delivery round.

Royal Mail had been testing its system in the west of England, but today announced that it will be extended across the country.

Online shopping is booming, with sales in August 47 per cent up on pre-lockdown levels, according to the Office for National Statistics.

Royal Mail has been forced to rely increasingly on parcels, as letters drop in importance with the dominance of email. Since 2004 the number of letters it delivers has halved. This year has been particularly harsh, with the pandemic increasing the rate of the fall.

In the three months to the end of June, the company delivered 788 million fewer letters than in the same period of 2019, a 33 per cent fall.

But consumer experts fear the new service will harm prospects for the Post Office, which is a separate company owned by the Government. 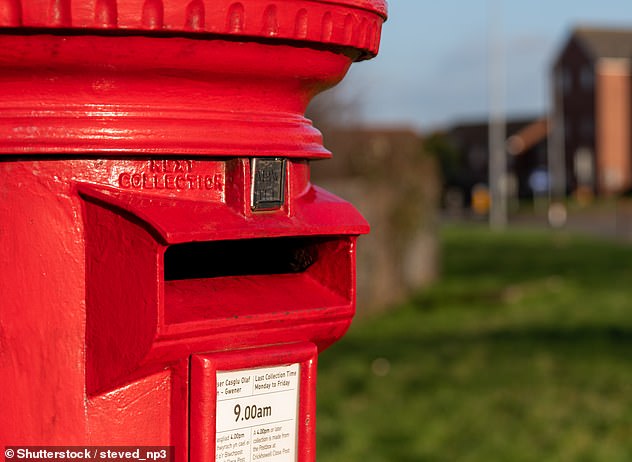 The service means online sellers and shoppers will be able to send or return items by post without leaving their home.(Stock image)

James Daley, from campaign group Fairer Finance, said: ‘If this idea takes off, then in some areas, it probably will be the end of the local post office.’

Royal Mail said the initiative is designed to complement the Post Office’s service and give customers more flexibility.

Nick Landon, its chief commercial officer, said: ‘Whether you’re up against time and working from home, making a return, selling online or sending a gift, Parcel Collect is here to help.’

But Peter Hall, from the National Federation of Sub-postmasters, said: ‘Sub-postmasters act as a salesforce for Royal Mail services, providing expert advice and guidance to customers, as well as a trusted and safe environment to send letters and parcels.

‘So this move to circumvent post offices is a worry for sub-postmasters. Royal Mail have said that this service is ‘designed to complement post office services’ – we simply cannot see how that is the case.’

A Post Office spokesman said: ‘We are working with Royal Mail to secure a new agreement that will continue our long-standing relationship and that will provide customers with continued convenience when it comes to sending letters and parcels.’