Finishing touches are being made to Britain’s first forecourt only for electric vehicles before it opens next month.

The station in Braintree, Essex, is the first of a £1billion nationwide network of 100 electric forecourts planned over the next five years.

The 2½-acre site has been built with 24 charging points which can replenish the batteries of the latest plug-in models in around 20 to 30 minutes. 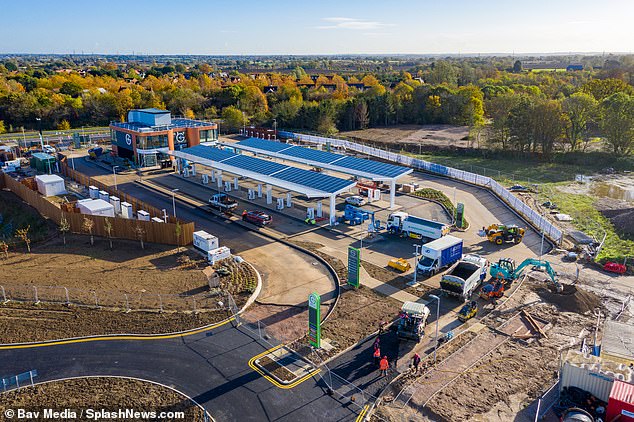 Finishing touches are being made to Britain’s first forecourt only for electric vehicles before it opens next month in Braintree, Essex

There are also six ‘superchargers’ for Tesla vehicles. WHSmith, Costa Coffee and Post Office shops have been built on the site, which is powered by solar energy and battery storage.

Support will be provided by electric vehicle experts from the AA.

Gridserve, the company behind the project, says it wants to make electric vehicle charging as simple as stopping at a petrol stations.

It is planning to build dozens of electric forecourts on some of the country’s busiest roads. The next two are planned for Norwich and Uckfield in East Sussex.

The project has been backed by the Government, which plans to ban sales of new petrol, diesel and hybrid cars by 2035, but this could be brought forward to 2030.

Industry leaders have warned the target is overly ambitious. The Society of Motor Manufacturers and Traders says £17billion of investment is needed to get a charging network ready for the mass electric vehicle market, with more than 500 new charge points needed every day until 2035. 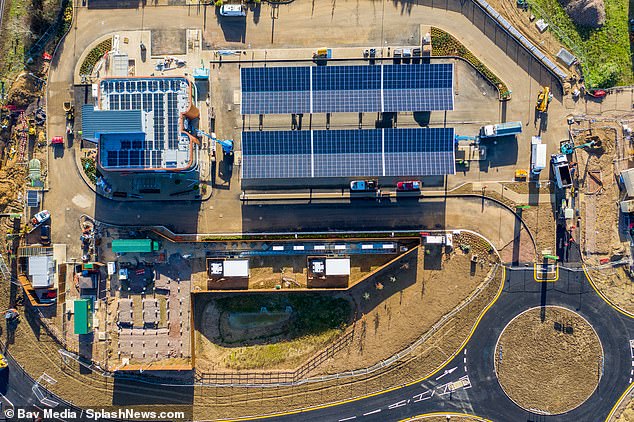 It is calling for tax relief for zero-emission vehicles and a long-term commitment to ‘plug-in grants’ which would reduce the cost of electric cars.

This funding would reduce the price of an electric family car by an average of £5,500, helping to drive 2.4million sales in greener vehicles over the next five years, the organisation said.

Prices for a standard-sized electric car start at about £30,000.

Gridserve founder Toddington Harper said the forecourts ‘will eliminate range and charging anxiety by making it easier and cheaper to charge an electric vehicle than to fuel a petrol or diesel alternative.

‘The UK’s first electric forecourt represents so much more than an electric equivalent of a modern petrol station – it will deliver a fully loaded customer experience, offering the best of British retail and customer service.’