I still see Liverpool and Manchester City as the stand-out teams in the Premier League and think one of them will win the title – but Leicester and Tottenham might have something to say about that.

Southampton also spent some time on top of the table over the weekend and it is pretty refreshing to see some different teams up there. It certainly keeps things interesting and it’s something that might last a bit longer too.

The big thing that has stood out already about this season is how unpredictable it has been compared to previous years. Every team has had at least one bad day – including all of the sides I have just mentioned.

That makes it exciting, and I don’t see it changing anytime soon, partly because of the intense schedule and the number of injuries that clubs are going to have to cope with – which is turning into another common theme.

‘Leicester will head for Liverpool full of confidence’

It is Leicester who deservedly lead the way at the moment. They are among the teams who have got injury problems but they are still playing some magnificent football.

I was really impressed by the Foxes in their win over Wolves on Sunday, in everything they did – going forward and defensively.

They are missing some key players in Wilfred Ndidi, Ricardo Pereira and Caglar Soyuncu but you wouldn’t know it from watching them.

Jamie Vardy is 33 in January but he is looking as sharp as he’s ever done – I know he missed one of his penalties against Wolves but some of his attacking play was fantastic.

Then you have Nampalys Mendy, who was unbelievably good in midfield, and what a find Wesley Fofana looks at centre-half.

Brendan Rodgers’ side have had slip-ups like everyone else, in their case losing at home to West Ham and Aston Villa last month.

But now they are on a run of six straight wins in all competitions, and they will be full of confidence when they take on Liverpool at Anfield on the Premier League’s resumption after the international break.

‘Spurs are unspectacular but still winning’

When you’ve got the forward line that Tottenham have, with Harry Kane, Son Heung-min and Gareth Bale, you always carry a threat, especially with the form Kane and Son are in.

Son didn’t even have one of his better games against West Brom but it was Kane who popped up with another vital goal right at the end that briefly sent his side top of the pile.

Credit has to go to Spurs boss Jose Mourinho, though, because of the positive change he made 12 minutes from time, when he took Moussa Sissoko and Bale off and brought on Lucas Moura and Carlos Vinicius.

That’s what won them the game in the end. I know Harry secured the three points but it happened because Mourinho was looking to win the game, and it worked.

Spurs have now gone seven games unbeaten in the league since losing at home to Everton on the opening weekend in what was a poor performance.

Yes, that run includes their 6-1 win at Old Trafford but they have also shown they can win the hard way, when they are not playing well.

They dug out wins over Burnley and Brighton in the past couple of weeks and it was exactly the same against the Baggies so, without playing spectacular football, Tottenham find themselves in a great position in the table.

They actually should have more points on the board, but they conceded a late equaliser against Newcastle and somehow let that 3-0 lead slip in the final few minutes against West Ham.

Even so, they have given themselves something to build on and their game against City on 21 November is another one to look forward to.

Positives for Guardiola at the back

The way City and Liverpool started on Sunday, I thought we were set for an absolute classic. The game was incredibly open and both teams began with a very attacking line-up.

Liverpool were like a 4-2-4 when they went forward, and City were the same. It looked like we were going to see a lot of goals.

They both of kind of cancelled each other out after half-time, though, and as the game went on it looked like the fear of being beaten meant they both settled for a point in the end.

You can understand if fatigue played a part as well, because they have both played twice a week since the start of season in mid-September, and had Champions League games again in midweek. That’s probably a big reason why they could not keep up the pace they started the game with.

City will rue their missed penalty at 1-1 and also they had the best chance to win it in the second half, when Gabriel Jesus headed wide, but I thought a draw was a fair result. 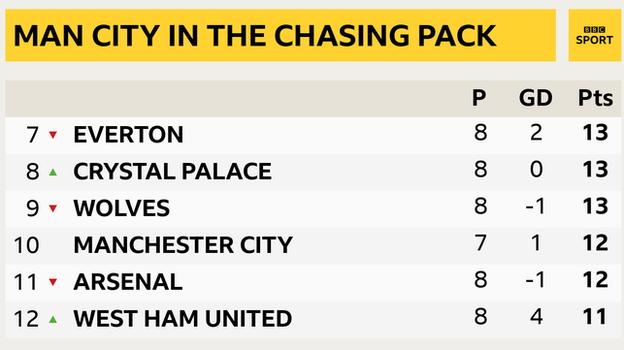 Sunday’s draw leaves City in 10th place but that is a false position because they have a game in hand. If they win it, they will go fifth – two points behind Liverpool.

Pep Guardiola’s side have had an eventful start to the season, with their collapse at home to Leicester and having to cope without a fit striker when Jesus and Sergio Aguero were both injured.

They have come through it pretty well, however, and one of the biggest positives for Guardiola is that Aymeric Laporte and Ruben Dias have already formed a solid defensive partnership, something they struggled to find last season.

Liverpool have had issues too, mainly in adjusting to life without the injured Virgil van Dijk, but Joel Matip came back into their defence at Etihad Stadium and they looked a little bit more solid.

Their big set-back this season was obviously the 7-2 defeat against Aston Villa, which was a result that shocked everyone – but it’s notable that they have not lost in seven games since.

They can still terrify teams when they pour forward and, like City, they are not going away anytime soon. This season may be unpredictable, but one of them will end it as champions, I am certain of that.

The conclusion of the Palestinian dialogue in Cairo – RT Arabic