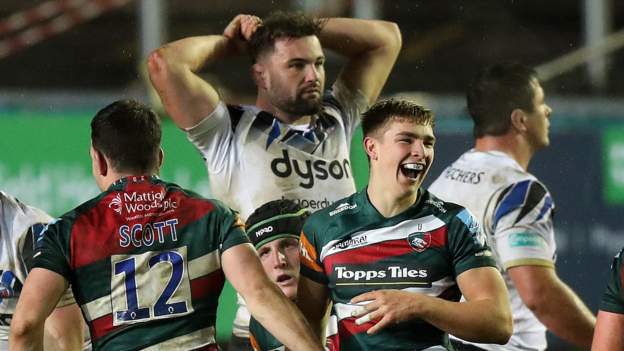 Three George Ford penalties and Freddie Steward’s try cut the gap to a point at the interval and Tigers went ahead with Harry Wells’ try just after the break.

At 26-26 Cameron Henderson’s try put Tigers ahead and despite Cameron Redpath’s late score they held on.

The win sees Leicester move up from 11th to seventh in the table, while Bath drop to ninth.

Bath had not played a league game since 12 December due to Covid-19 postponements, while Leicester had only trained for two days and were without head coach Steve Borthwick after their own Covid-19 issues.

It came after Leicester’s Tom Youngs and Jasper Wiese broke from a line-out thinking they had the ball, only to find it had been stolen by Josh McNally who broke and got to within a metre of the tryline before Obano went over.

Tigers’ fortunes took a further turn for the worse soon after as Ford missed a relatively simple penalty and two minutes later Wiese was sin-binned for a high tackle on Anthony Watson.

With a man down, Leicester were punished as Spencer jinked through their defensive line 10 metres inside his own half, chipped the full-back and gathered his own kick despite Nemani Nadolo holding his shirt to go over under the posts.

But two Ford penalties put Leicester back in touch as they grew in confidence, and the England fly-half created the chance that saw Steward go over from close range after Ellis Genge’s bulldozing run set up good field position.

A Rhys Priestland penalty late in the half created a four-point gap but Ford kicked a long-range effort with the final play of the half to ensure a one-point gap at half time.

Straight from the restart, Leicester took the lead as Wells crashed over after a great blindside switch of play from Ben Youngs found Nadolo who released the lock with an offload from the back of his hand.

Three Priestland penalties to one from Ford saw the sides level with 17 minutes to go before Henderson used all of his giant frame to stretch over from close range before Ford’s fifth penalty took the lead to 10 points.

Redpath was forced over from close range after a late Bath surge, but replacement Josh Matavesi missed the conversion and Leicester held on to win the 50th Premiership meeting between the two sides.