President Donald Trump and Democratic challenger Joe Biden squared off Tuesday night in their crucial first debate of the 2020 campaign, the most pivotal opportunity yet for them to outline starkly different visions for a country facing multiple crises.

Here we analyse what each candidate has said:

CLAIM: Biden said there are 100million Americans with pre-existing conditions

FACT: The Centers for Medicare and Medicaid says a range from 50 to 129 million not including the elderly that have pre-existing conditions

FACT: Biden said in March ‘banning all travel from Europe — or any other part of the world — will not stop’ the virus.

The day after Trump’s announcement on China Biden, without mentioning the virus, said: ‘We need to lead the way with science — not Donald Trump’s record of hysteria, xenophobia, and fear-mongering.’

CLAIM: Trump said Biden’s son Hunter was kicked out of the military

FACT:  Hunter Biden was discharged from the Navy Reserve in 2014 after failing a drug test and has struggled with alcohol and drug abuse.

CLAIM: Trump said Hunter was given $3.5 million by the mayor of Moscow’s wife

FACT: Hunter Biden had a ‘financial relationship’ with the widow of a Moscow mayor who was ousted over corruption allegations, according to a report from Republican senators.

The 87-page report was released on Wednesday by the Republican-led Senate Homeland Security and Governmental Affairs Committee and the Finance Committee, and focuses on Hunter Biden’s business dealings in Ukraine.

FACT:  Sources told Axios in August last year Trump asked Homeland Security and national security officials several times if nuclear bombs can be dropped on hurricanes to stop them from making landfall in the US.

‘The story by Axios that President Trump wanted to blow up large hurricanes with nuclear weapons prior to reaching shore is ridiculous. I never said this. Just more FAKE NEWS!’, the president tweeted.

CLAIM:  Biden said the US has ‘5 percent — 4 percent — of the world’s population, 20 percent of the coronavirus deaths’

FACT: This is true

FACT: Unemployment has fallen from 14.7 per cent in April to 8.4 per cent

CLAIM: Trump said the US is ‘weeks away from a vaccine’

FACT: Health officials have said we may have to wait until next summer until a vaccine is widely available

CLAIM: Trump said: ‘You agree with Bernie Sanders, who is far-left on the manifesto, we call it’

FACT: Biden and Sen. Sanders formed a joint task force in May to unify Democrats on issues including health care, producing a 110-page set of policy recommendations

FACT: The president has signed executive orders lower drug prices but experts doubt the relief that will provide

FACT: The president has repeatedly been seen in public without a mask; he often mocks Biden for wearing one

FACT: Manufacturing employment has risen by just under 500,000 jobs since Trump became president. The sector is currently down by more than 200,000 jobs from when he took office

CLAIM: Trump said of Biden: ‘He wants to shut down this country and I want to keep it open’

FACT: Biden said in September: ‘There is going to be no need, in my view, to be able to shut down the whole economy.’

CLAIM: Biden said of Trump: ‘His own former spokesperson said, you know, ‘Riots and chaos and violence help his cause.’ That’s what this is all about.’

FACT: The president’s former adviser Kellyanne Conway said in August: ‘The more chaos and anarchy and vandalism and violence reigns, the better it is for the very clear choice on who’s best on public safety and law and order.’

CLAIM: Biden said the US has a ‘higher deficit with China now than we did before’

FACT: The trade deficit with China fell sharply between 2018 and 2019

FACT:  The first lady Hillary Clinton used the term ‘super predator’ in 1994 to support a bill co written by Biden. He warned of ‘predators’ in a floor speech supporting the bill. 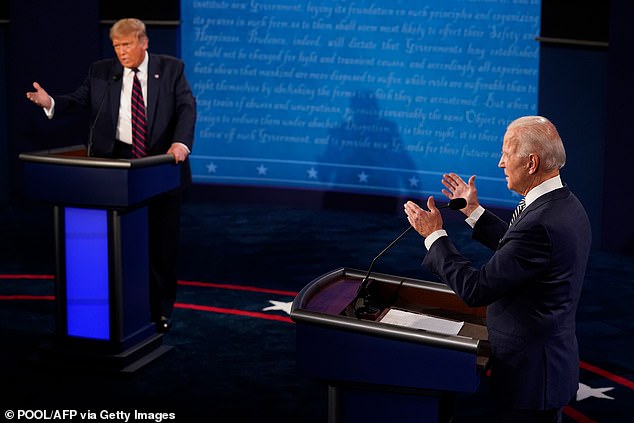