Prince Andrew left the Duke of Edinburgh‘s funeral in the back of his new £220,000 racing-green Bentley which he had fitted with personalised number plates.

The Duke of York, 61, sat in the back of the 200mph Bentley Flying Spur – which was blue when first delivered in September before being spray-painted.

The motor, with its personalised number plate, was pictured driving out of Windsor Castle on the way to nearby Royal Lodge, the home Andrew shares with ex-wife Sarah Ferguson, 61.

Just hours earlier, Prince Andrew walked behind his father’s coffin as it was slowly carried to St George’s Chapel in Windsor on the back of a custom-built Land Rover hearse.

Inside the chapel, Andrew sat closest to the Queen – with the family still separated by countless empty chairs due to social distancing rules.

The duke’s appearance at the funeral came 18-months after he stepped back from Royal duties after his disastrous Newsnight interview over his friendship with Jeffrey Epstein. 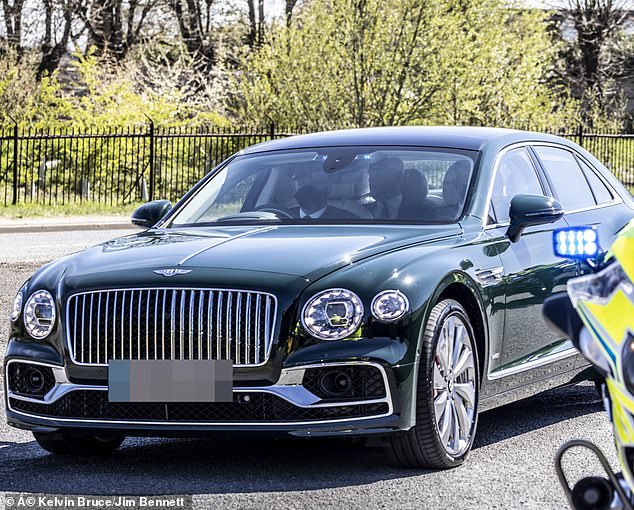 Prince Andrew left Prince Philip’s funeral in a brand new £220,000 racer-green Bentley. The Duke of York, 61, sat in the back of the 200mph Bentley Flying Spur (pictured arriving at the funeral) – which was blue when first delivered in September before being spray-painted 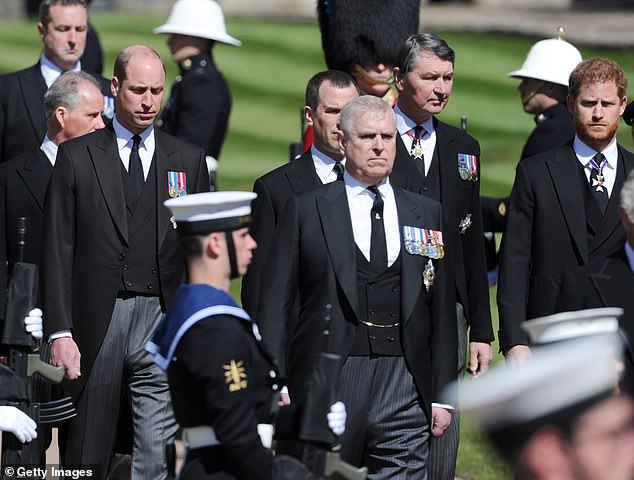 Just hours earlier, Prince Andrew solemnly walked behind his father’s coffin as it was slowly carried to St George’s Chapel in Windsor 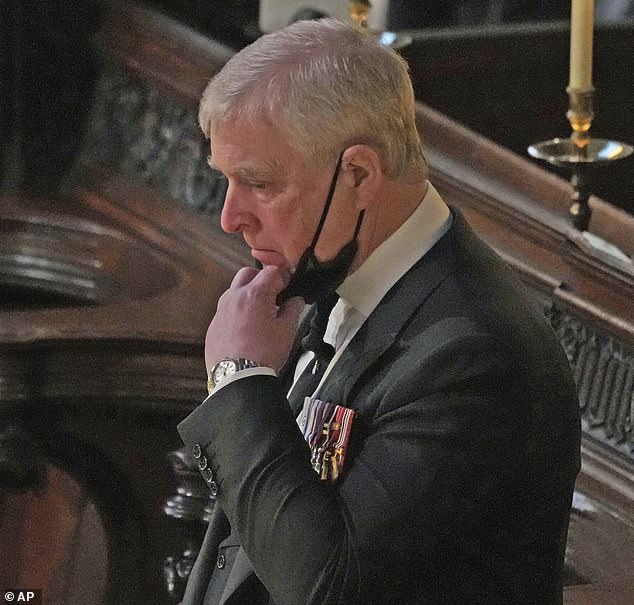 Inside the chapel, Andrew sat closest to the Queen – with the family still separated by countless empty chairs due to social distancing rules

The new Bentley joins a fleet of luxury motors belonging to Andrew – including a £115,000 petrol-hybrid Range Rover, The Sun reports.

The green car replaces an old Bentley Continental GT owned by the duke. Depending on the year it was first purchased, the old motor could have been sold for upwards of £130,000 second hand.

It is unclear what happens to cars belonging to members of the Firm when they owner is ready to sell.

In 2019, a Mulsanne owned and used by the Queen was returned to Bently where features – such as police lights and security communication devices – were removed and the registration number changed before being sold by a private dealership.

It was this week revealed that Prince Andrew and Sarah Ferguson made regular visits to see the Queen after Prince Philip’s death.

The Queen was left sitting on her own during the Duke of Edinburgh’s funeral on Saturday in tear-jerking images that shocked the nation.

However, the royals have rushed to her side following Philip’s death, led by Andrew and his ex-wife with sources saying that Prince Edward and Sophie Wessex have also spent ‘a lot of time’ supporting her.

As the Queen returns to life without her husband of 73 years she will also be staying at Windsor Castle with a ‘bubble’ of 22 Royal household staff, including some of her closest aides.

It was today revealed that the Windsor ‘bubble’ will be the only group joining her for her 95th birthday on Wednesday – her first without Philip in seven decades.

Plans to mark the day with a new portrait of her are set to be shelved because she is still in the official period of royal mourning for her beloved husband.

The glaring absence of Prince Philip will be impossible to ignore and the run-up to what should have been a joyous day is set to be overshadowed by speculation about the major rift in her family.

While onlookers were heartened by the sight of William and Harry in conversation as they left their grandfather’s funeral on Saturday, sources said a meaningful reconciliation between the brothers was still some way off.

Harry was yesterday said to be flying back to Los Angeles very soon after being seen with his brother and sister-in-law Kate for the first time in more than a year.

That gives little time to heal open wounds and it is not known whether the 36-year-old saw his father Prince Charles outside of Saturday’s emotional proceedings. 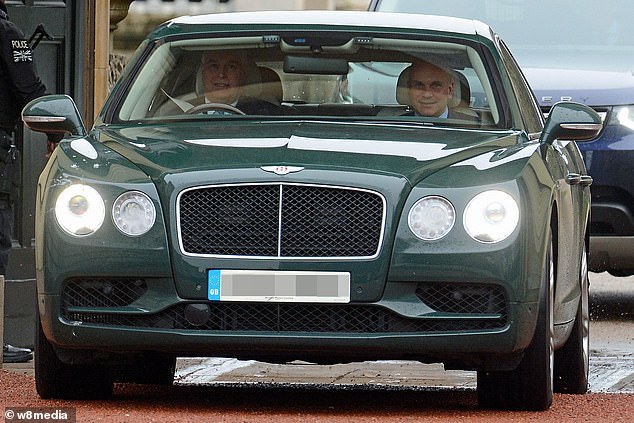 Previous Bentley: The Duke of York driving a Bentley Continental GT – the old Bentley he replaced. Depending on the year it was first purchased, the car can be sold for upwards of £130,000 second hand 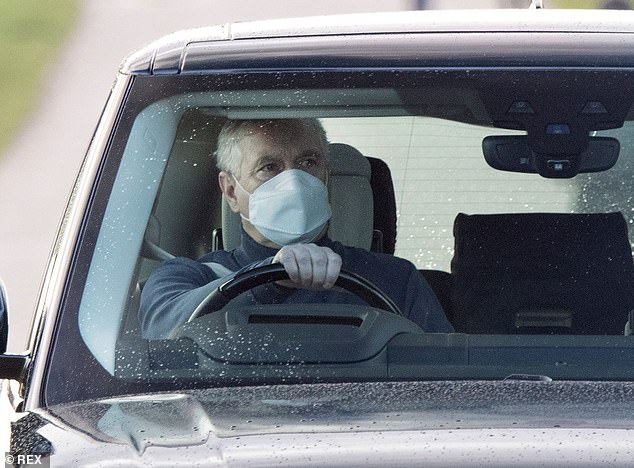 Prince Andrew driving his £115,000 Range Rover on the Windsor estate in December 2020

Kate seemingly broke the ice outside St George’s Chapel by speaking to Harry, with whom she had once been so close.

As the family group walked back from the ceremony – an impromptu decision, as a fleet of state cars had been laid on for the mourners – she hung back slightly so the brothers, driven apart by Harry and Meghan’s acrimonious decision to quit royal duties and move to the US, could talk.

The body language was stilted and the exchange appeared to be little more than polite chit chat, but it was a start.

Senior royals, including the Queen, Charles, William and Harry, spent more than an hour together outside in the castle grounds before going their separate ways by 6pm.

It was unlikely they had any serious discussions but it was the most time they had spent together as a family since Harry and Meghan quit the UK more than a year ago.

Royal sources however last night warned that ‘one swallow does not a summer make’ and the rift between the two men, particularly after the string of hurtful and highly damaging allegations made by the Sussexes in their bombshell Oprah interview last month, remained deep. 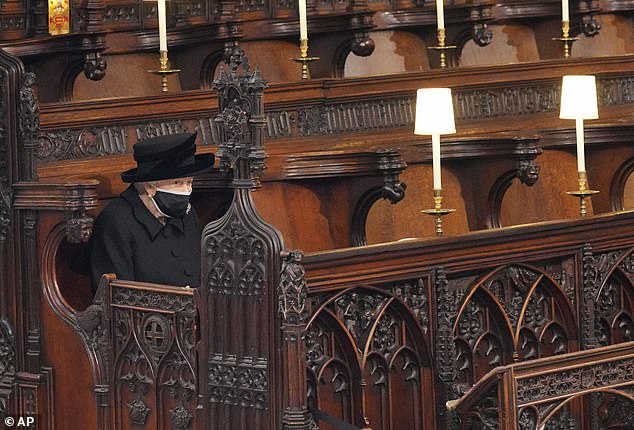 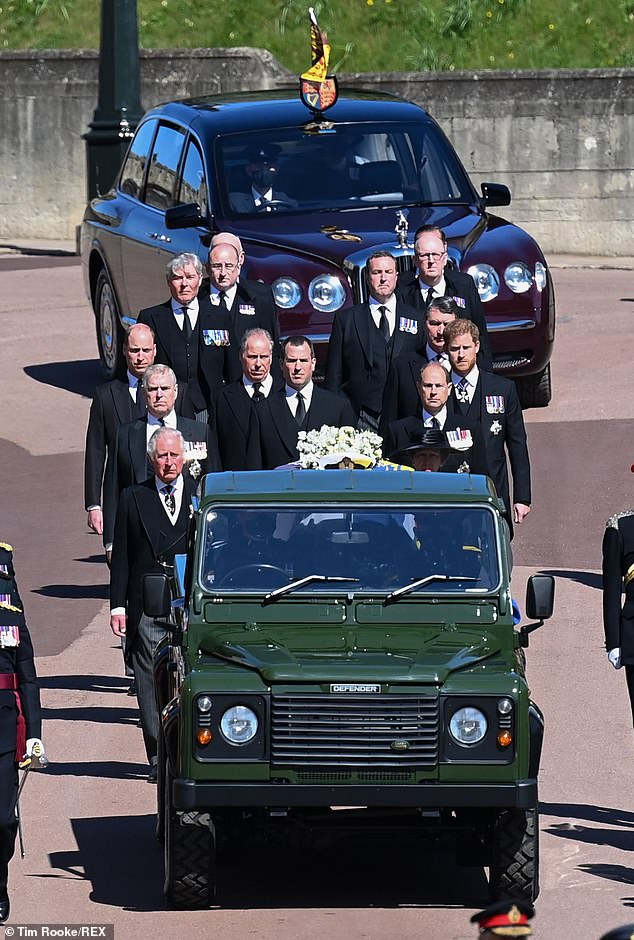 The Queen’s  Bentley followed the coffin from the castle to the church, behind the Land Rover and her family

One insider went so far as to suggest that the acrimony between the brothers could take years to heal, if ever.

And they stressed there was still widespread anger in the Royal Family and the household at large at the accusations levelled against them by the couple – in particularly the claims of racism and that Meghan was left suicidal through lack of support.

Harley-Davidson tops analysts’ estimates for earnings and revenue in Q1.

Harley-Davidson tops analysts’ estimates for earnings and revenue in Q1.