The documents from April 2016 contain details of when the Duke of York is alleged to have had sex with Epstein’s victim in London, something he strenuously denies.

The interview transcript reveals discussion about a dinner with the woman now known as Virginia Giuffre, Epstein and a third person whose name is redacted.

It also refers to a blanked-out guest in Maxwell’s London townhouse, but widespread previous reports suggest the person being referred to in both cases in Andrew.

The Duke was infamously photographed with his arm around Ms Giuffre – with Maxwell also in the picture which was taken at the socialite’s home in the capital. 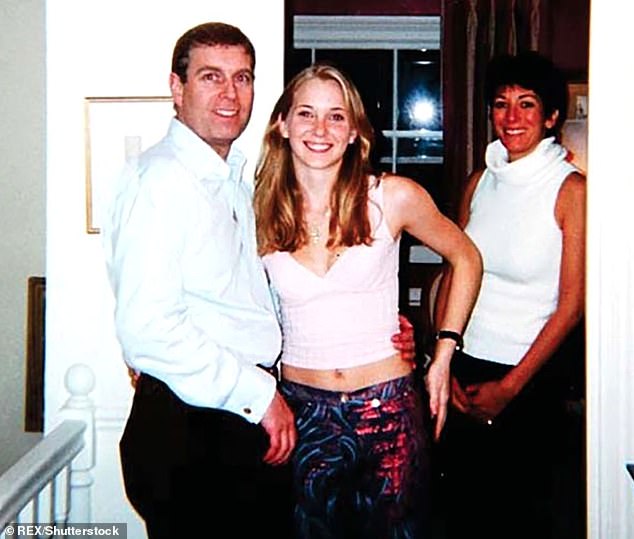 Andrew and Virginia Roberts (centre) at the home of Ghislaine Maxwell (right) in London, 2001 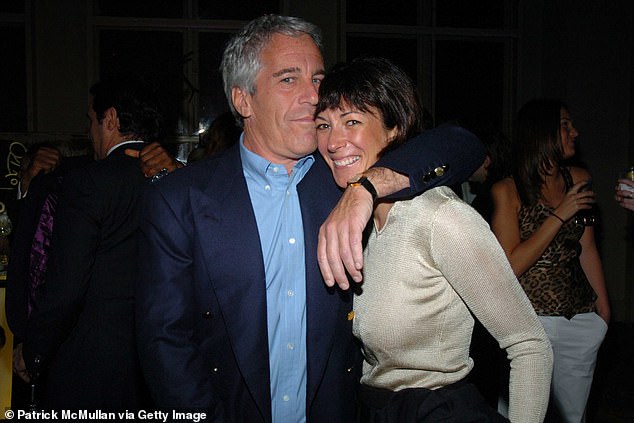 Ghislaine Maxwell is awaiting trial in the US after being charged with procuring teenage girls for Epstein (pictured together in New York in 2005) to abuse. She denies the charges

The transcript also reveals Maxwell was questioned over claims that a man was accused of using a Spitting Image puppet of himself to grope Ms Giuffre.

Again, Andrew is not mentioned by name, but widespread press reports have previously identified him as being the man whom the claims are against.

There is also discussion of the interior of Maxwell’s home, as seen in the photo of Andrew and Ms Giuffre, and reference to a banister with a ‘sort of bubble wood top’.

And there is a further reference to a man, again unidentified but believed to be Andrew, who Maxwell said ‘doesn’t even know who Virginia Roberts is’.

Maxwell was asked in the interview: ‘Did he tell you that he didn’t have sex with her.’ And she replied: ‘It would be difficult to have sex with someone you don’t know.’

Maxwell, who was Epstein’s ex-girlfriend, was combative and defensive under the tough questioning four years ago about her his interactions with underage girls. 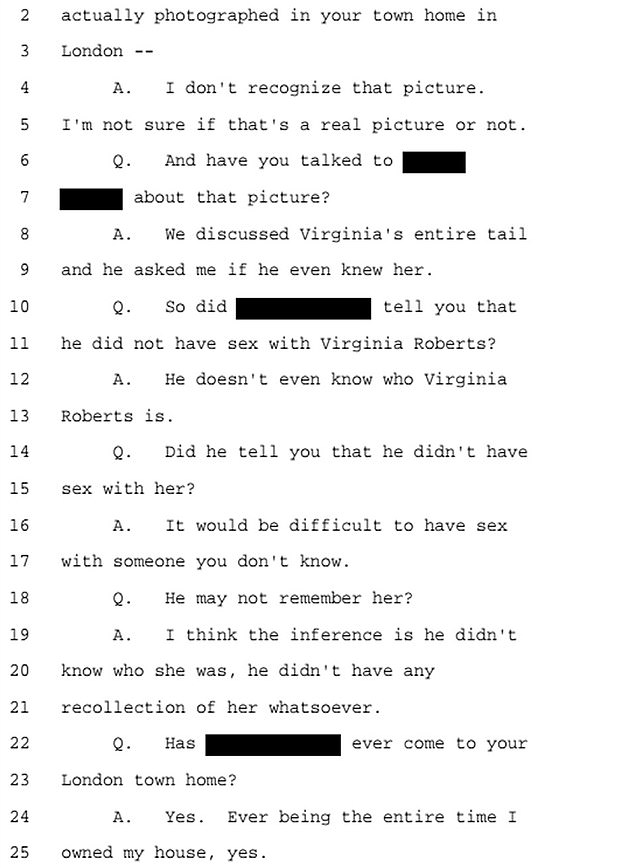 On page 232, there is a reference to a man, unidentified but believed to be Andrew, who Maxwell said ‘doesn’t even know who Virginia Roberts is’. Maxwell was asked in the interview: ‘Did he tell you that he didn’t have sex with her.’ And she replied: ‘It would be difficult to have sex with someone you don’t know’ 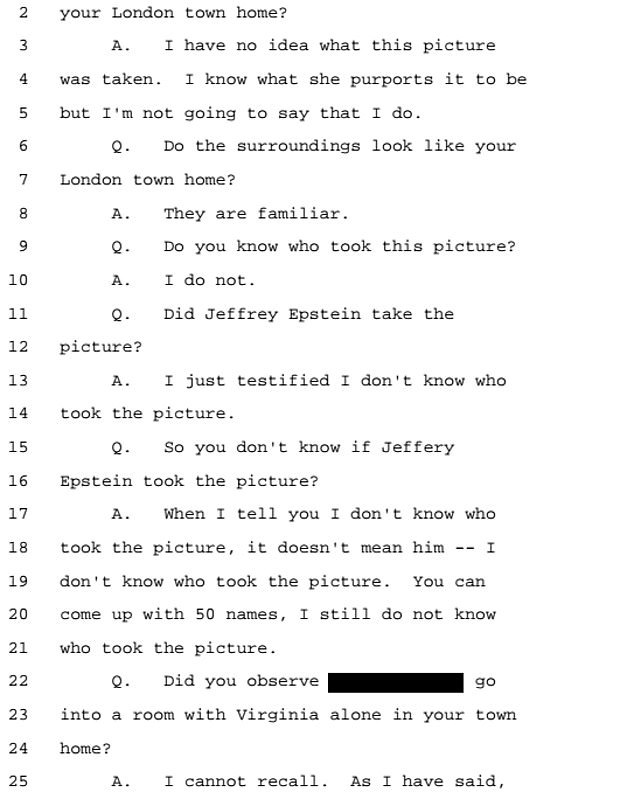 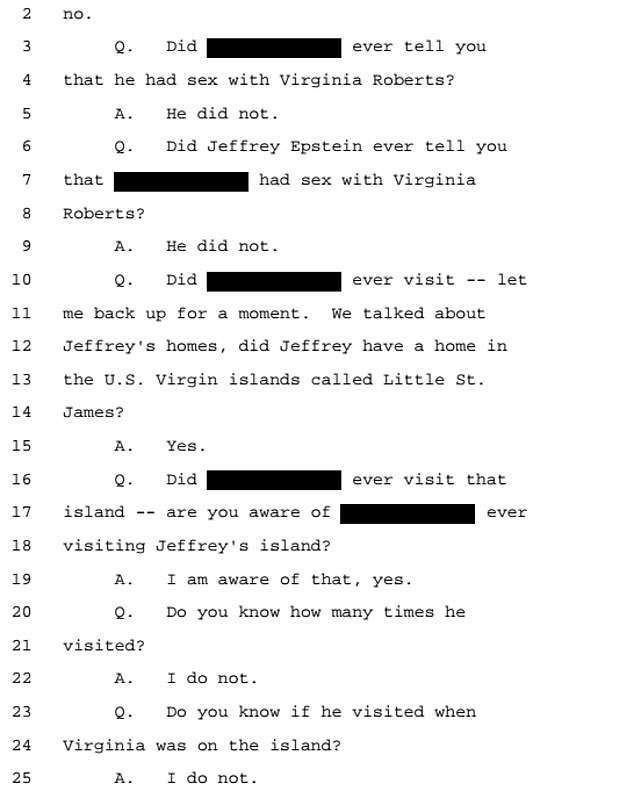 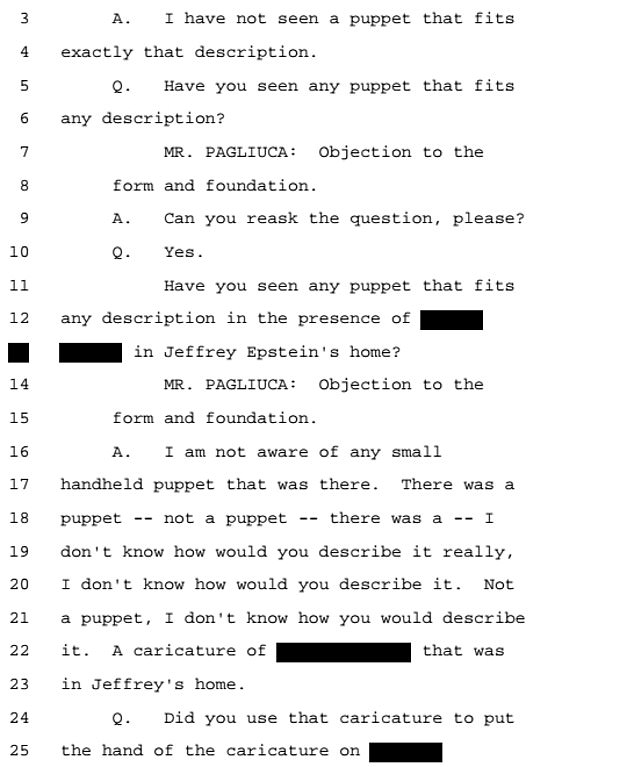 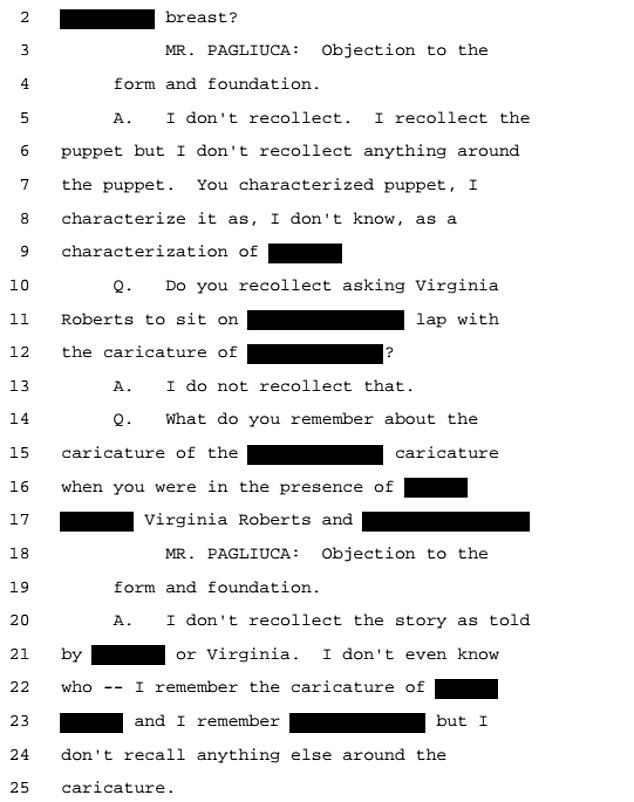 She repeatedly denied hiring anyone under the age of 18 for Epstein, who killed himself in a New York jail in August 2019 while awaiting a sex trafficking trial.

Manhattan US District judge Loretta A Preska had ordered the transcripts of seven hours of depositions of Maxwell be released by 9am local time today (2pm UK time).

‘I never saw any inappropriate underage activities with Jeffrey ever,’ Maxwell said.

Ms Preska allowed the release of the transcripts after rejecting arguments from Maxwell’s lawyers that the interviews for a defamation case brought against their client by an Epstein victim several years ago would jeopardise a fair criminal trial for her next July.

Maxwell, 58, has been held without bail since her July arrest on charges that she procured three underage girls for Epstein to sexually abuse between 1994 and 1997. She has pleaded not guilty.

The 2016 transcripts were among more than 2,000 pages of documents that began to be released last year after an appeals court began the unsealing of documents from the since-settled defamation case brought in 2015 by Ms Giuffre. 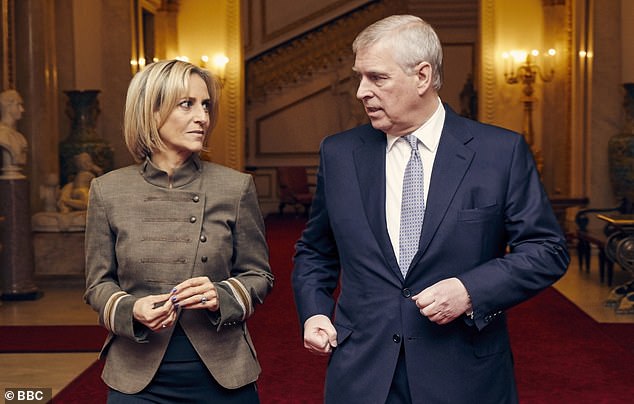 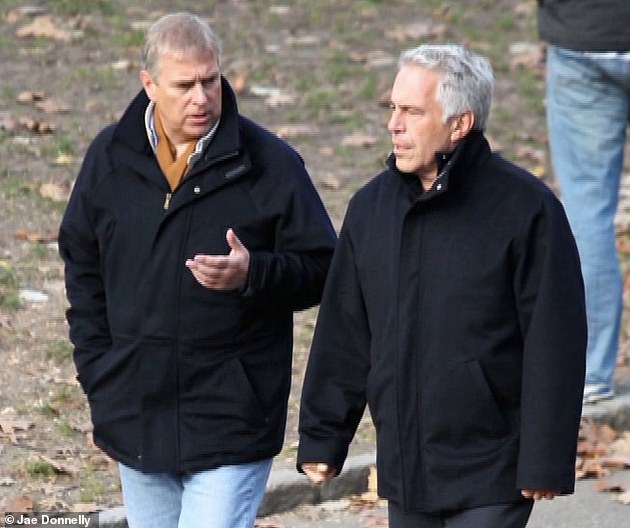 Ms Giuffre has accused Epstein of arranging for her to have sexual encounters with numerous wealthy and influential men, including Prince Andrew.

He and the other men have denied her allegations. In the transcripts, Maxwell repeatedly derided Giuffre, saying: ‘She has lied repeatedly.’

She said she ‘never instructed Virginia to have sex with anybody, ever’.

Asked if she trained Ms Giuffre to recruit other women to perform sexual massages, Maxwell said: ‘It’s absurd and her entire story is one giant tissue of lies.’

Epstein was 66 when he killed himself in jail in Manhattan in August 2019 as he awaited trial on sex trafficking charges. 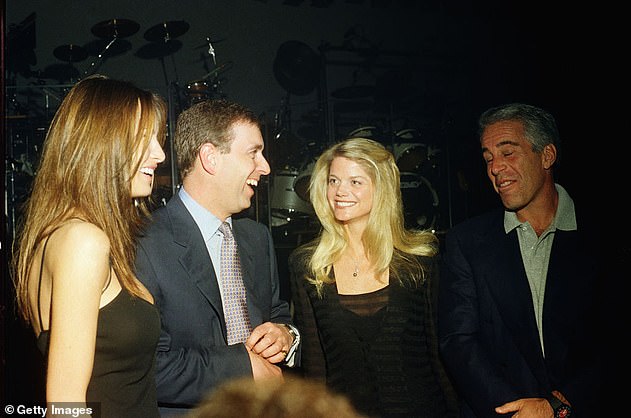 Andrew (second left) has said he became friends with Jeffrey Epstein (right) in 1999, after being introduced to him through Ghislaine Maxwell. Pictured: Melania Trump, Andrew, Epstein’s friend Gwendolyn Beck and Epstein at a party at the Mar-a-Lago in Florida in 2000 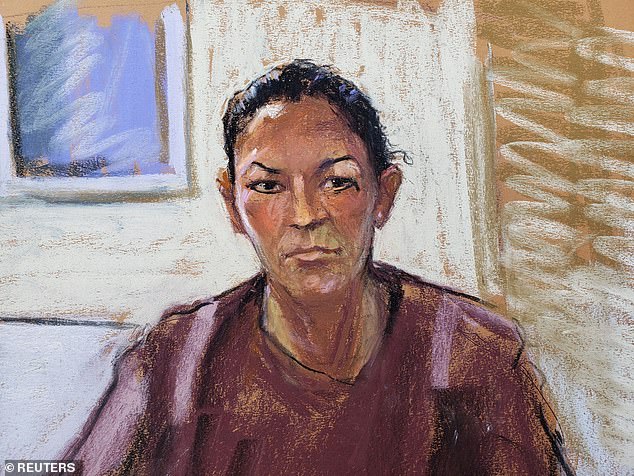 Andrew stepped down from royal public life in November following a disastrous BBC Newsnight interview, which had led to criticism of a lack of empathy for Epstein’s victims and a lack of remorse over his friendship with the convicted sex offender.

The Duke and his legal team are involved in negotiations with the US authorities over their requests for him to give a witness statement about his friendship with Epstein.

The Duke is rarely seen in public now, but was pictured in April helping his ex-wife Sarah, Duchess of York pack cupcakes into gift bags to donate to a Windsor hospice.

A spokesman for the Duke has been contacted for comment by MailOnline today.