The Prince of Wales and the Duchess of Cornwall have touched down in Jordan on their first overseas engagement since the Covid crisis began in March 2020.

The couple, who left the UK on Sunday and spent yesterday enjoying some rest time on the Middle Eastern country, looked relaxed as they disembarked their ministerial plane, Voyager, on the tarmac at Queen Alia International Airport in Amman, Jordan.

Camilla, 74, reached for a pair of sunglasses to protect her eyes from the Arabian sun, and looked dressed for the warm weather in a blue ditsy floral summer dress.

The royals will spend four days in both Jordan and Egypt and are representing the Government during the trip – with climate change thought to be high on the agenda for discussion. 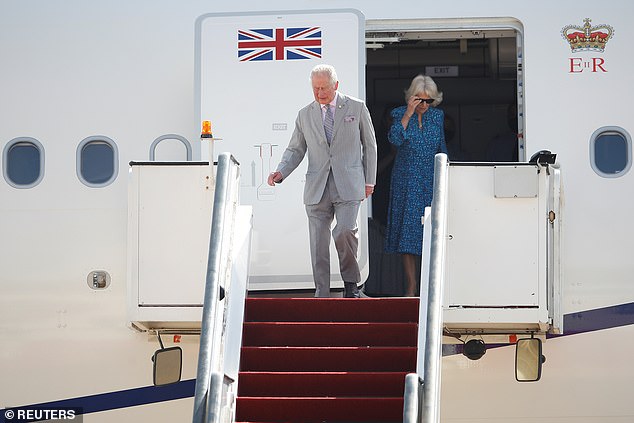 A little warm! A besuited Prince of Wales and the Duchess of Cornwall landed at Queen Alia International Airport in Amman, Jordan, on Tuesday ahead of their first royal trip since the pandemic began 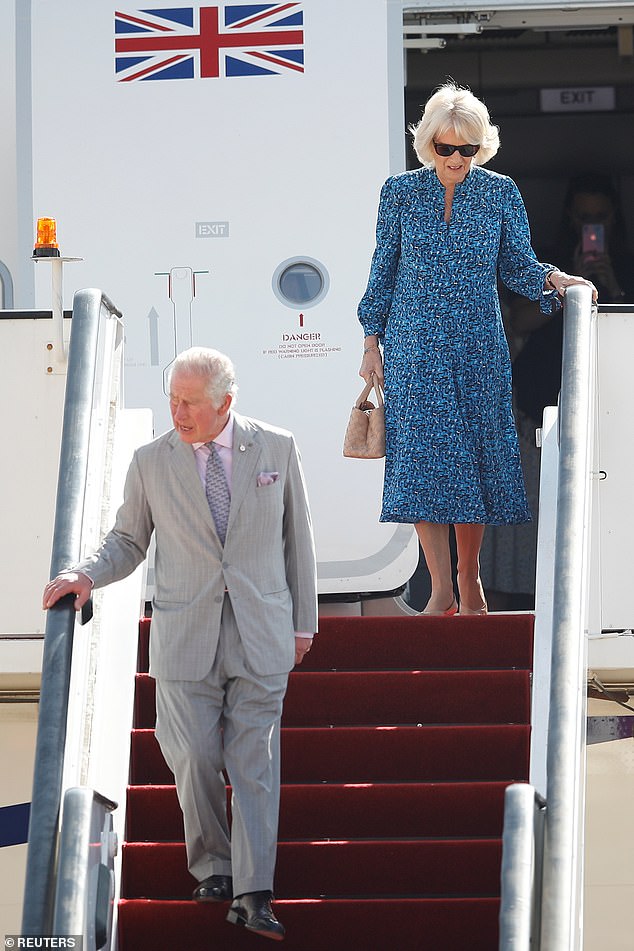 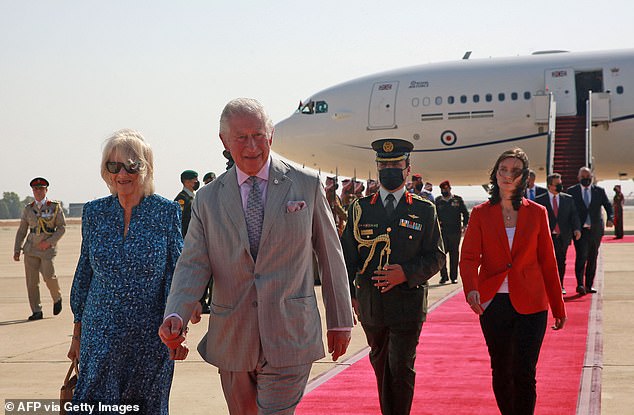 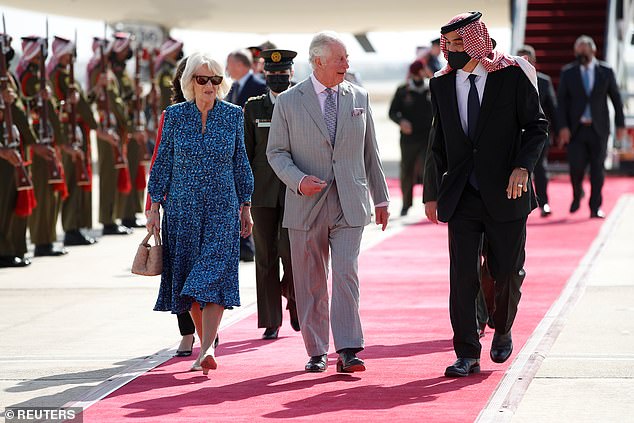 The couple pictured striding down the red carpet at the airport this morning; their focus during the trip will be encouraging discussion on climate change 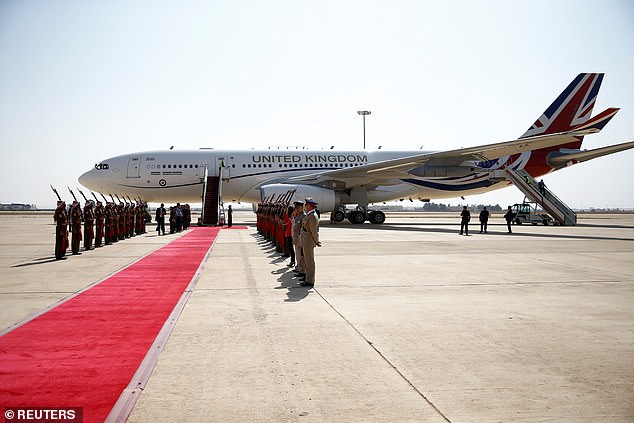 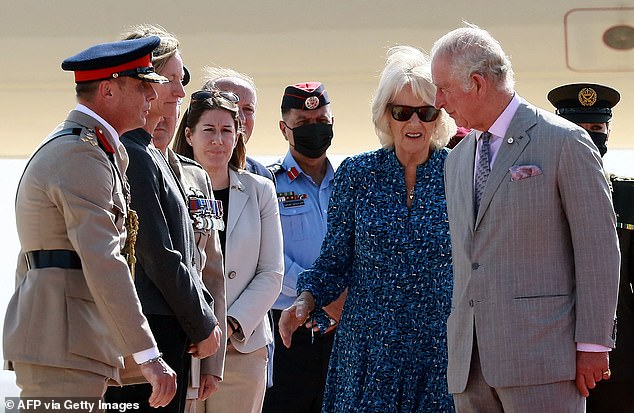 A regal welcome: the couple received a guard of honour as they touched down in the Middle Eastern capital on Tuesday 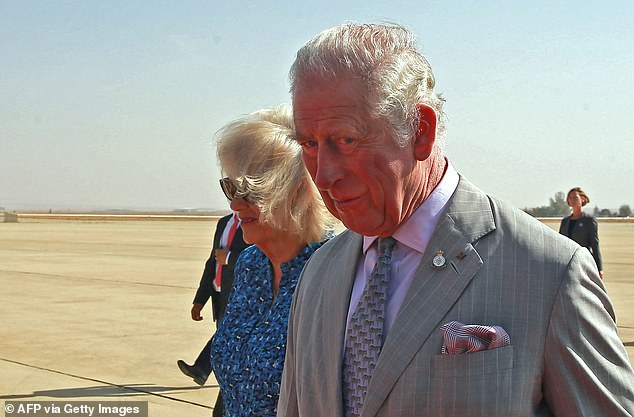 After a busy weekend marking Remembrance Sunday, as the most senior royal at the Cenotaph in the Queen’s absence, the Prince will spend the rest of this week in the Middle East 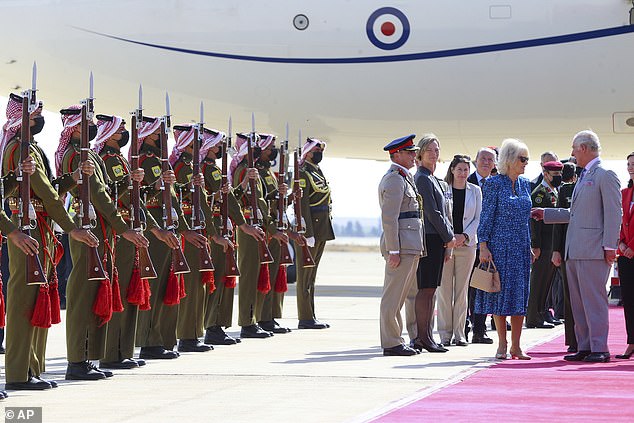 Prince Charles, who celebrated his 73rd birthday on Remembrance Sunday, donned a light grey suit, pale lavender shirt and patterned tie for the first day of their trip.

It’s thought the couple’s first stop will be the Al Husseiniya Palace in Amman.

The couple flew in Voyager, the ministerial jet, and were greeted on the runway by a small diplomatic party led by the UK’s ambassador to the country Bridget Brind.

Among the group was Stephanie Al-Qaq, the Foreign, Commonwealth and Development Office’s director for Middle East and North Africa, and Defence Attache Brigadier Jamie Piggott.

The couple left the UK on Sunday, Charles’ birthday, after attending the national remembrance service at the Cenotaph and have been spending private time in Jordan.

The trip will help the Foreign and Commonwealth Office to use their legendary ‘soft power’, opening doors not normally available to diplomats and politicians. 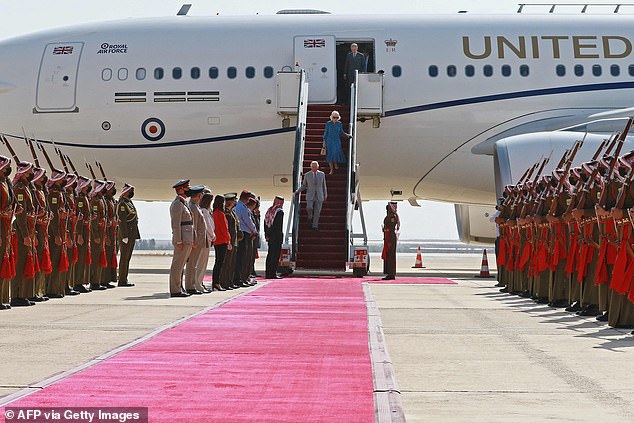 Double jabbed, the couple are also thought to have now had their boosters ahead of the visit 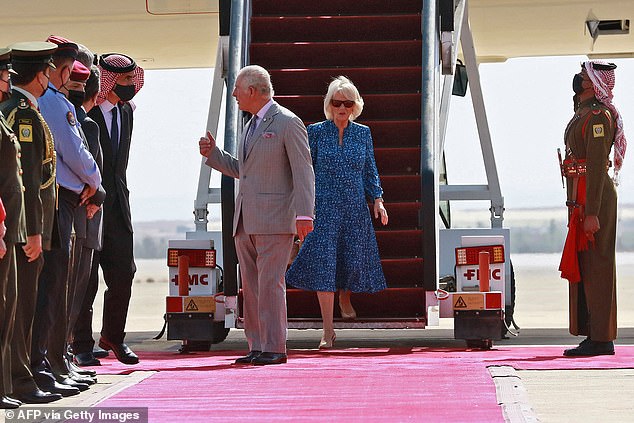 Prince Charles chats to a dignitary as he steps onto Jordan soil – the couple took the five-hour flight to the country on Sunday, enjoying some private time yesterday 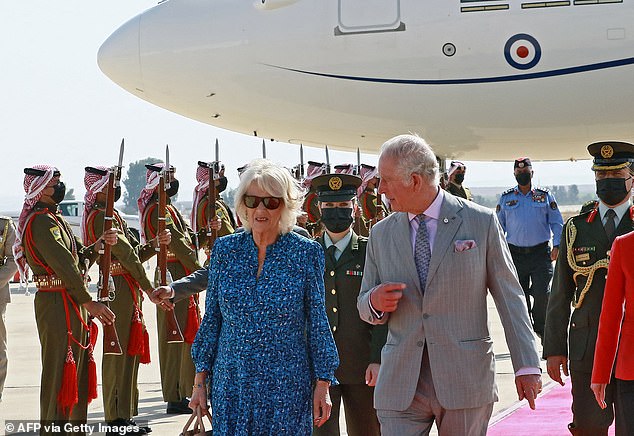 The royal couple stroll down the red carpet following the flight  on Voyager, the ministerial plane

The royal family have largely had their wings clipped as a result of the pandemic and this is the first royal overseas tour for almost two years.

The Prince and Duchess are both double jabbed and will likely have had their boosters by the time the trip takes place. As the Queen no longer travels abroad, any trip by Charles is akin to a state visit and treated with huge significance.

Speaking ahead of the tour last month, Chris Fitzgerald, deputy private secretary to the prince, said climate change would be one of the main themes of the visit, and other issues would include inter-faith dialogue, female empowerment and efforts to preserve cultural heritage. 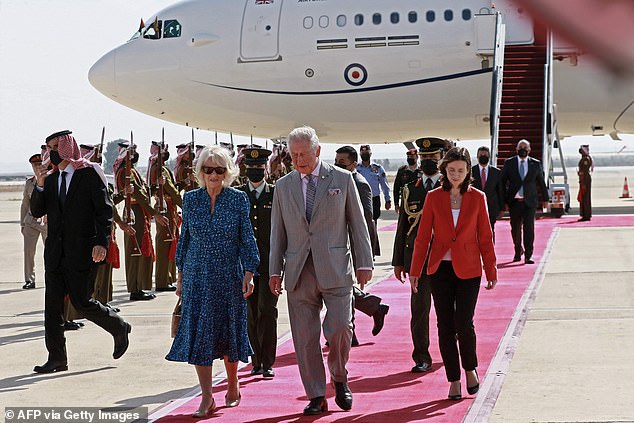 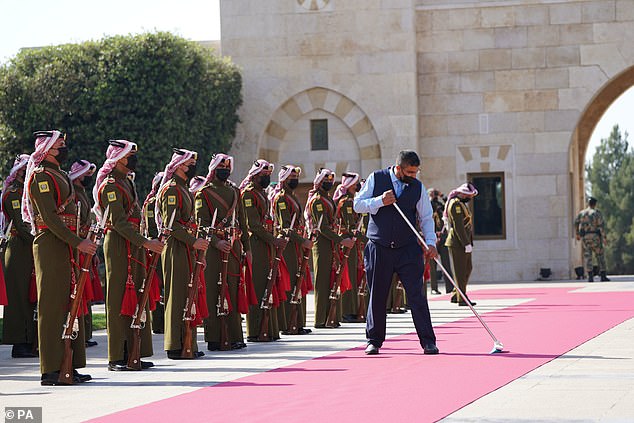 Palace bound: Final preparations are made for the arrival of the royals at the Al Husseiniya Palace in Amman 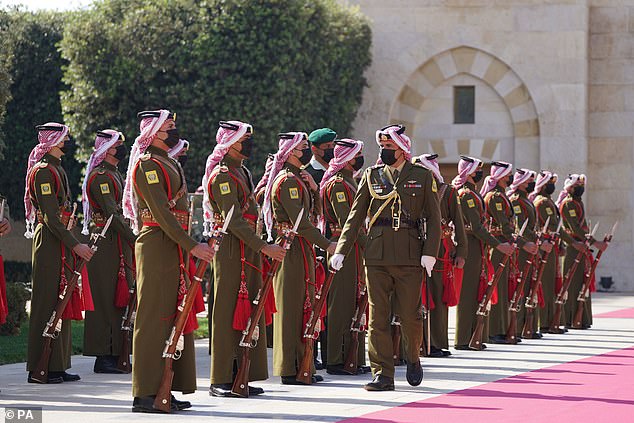 Mr Fitzgerald said: ‘The first royal tour in almost two years will come at a significant moment in the UK’s relationship with both countries

‘Their royal highnesses will first travel to Jordan, where they will celebrate both Jordan’s own centenary and 100 years of the UK-Jordan bilateral relationship.

‘Their royal highnesses’ visit to Egypt comes as the UK holds the Cop presidency and Egypt has been nominated to assume the Cop27 presidency in 2022.

‘In this decisive decade for climate action, the next 12 months is therefore expected to see a significant co-operation between the UK and Egypt. Indeed, both visits will have a major focus on addressing the climate crisis.’

After a busy weekend marking Remebrance Sunday, as the most senior royal at the Cenotaph in the Queen’s absence, Charles will spend the rest of this week in the Middle East.

The family have close links with this part of the world, the Duchess of Cambridge spent part of her childhood in Jordan when her father Michael worked as a manager for British Airways in Amman.

Iranians celebrate the pomegranate festival in the center of the capital, Tehran.. video

NBA: JaVale McGee’s pop to Okogie reigns in the Top of the NBA

NBA: JaVale McGee's pop to Okogie reigns in the Top of the NBA