Prince Harry ‘addressed Prince Charles directly’ and showed gestures of ‘mimed aggression’ when discussing how ‘history was repeating itself’ with his wife Meghan Markle during his new docuseries, a body language expert has claimed.

During The Me You Can’t See, the Apple TV+ show he co-produced with Oprah Winfrey, the Duke of Sussex, 36, claimed Prince Charles made him ‘suffer’ as a child – something royal commentators have claimed will ‘hurt’ the Prince of Wales deeply.

He also accused the Royal Family of ‘total silence’ and ‘total neglect’ when Meghan was suicidal, adding: ‘Before the Oprah interview had aired, because of their headlines and that combined effort of The Firm and the media to smear her, I was woken up in the middle of the night to her [Meghan] crying in her pillow – because she doesn’t want to wake me up because I’m already carrying too much.’

Harry admitted he wished he had ‘called out the racism’ when he first started dating Meghan, but said he would no longer accept it after fearing ‘losing another woman’ in his life. He also allowed cameras to film him undergoing an ‘extraordinary’ therapy session, during which he received ‘eye movement desensitisation and reprocessing’ (EMDr) treatment for anxiety attacks he said are triggered every time he flies into Britain. 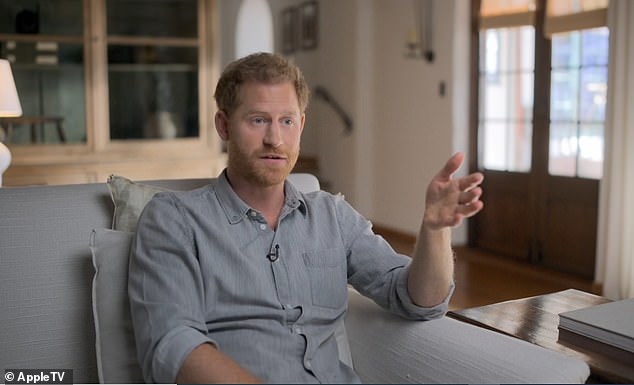 Prince Harry ‘addressed Prince Charles directly’ and showed gestures of ‘mimed aggression’ when discussing how ‘history was repeating itself’ with his wife Meghan Markle during his new docuseries, a body language expert has claimed

‘We see three strong sets of emotional reveal from Harry in this first documentary about mental health. First is the unmasked version with signals of sadness and vulnerability, then the very angry, resentful version with eye-narrowing and lip-jutting and lastly the “adult, in control” version of Harry, who appears calmer and as something of a guru or therapist himself.’

She added: ‘There is a very powerful body language moment in this episode where Harry appears to be addressing his father Charles directly.

‘He begins by making comparisons between his mother’s fate and Meghan. When he asks himself about regrets in a rhetorical format he shows signs of anger again as he replies he regrets “not taking a stance earlier and calling out racism”.

‘His finger points in a stabbing gesture of mimed aggression and his blink rate increases. He makes comparisons to his mother’s circumstances using the pointing gestures and ending in a wry, mirthless laugh to suggest disbelief.

‘Harry’s hands stir in the air when he says it was “incredibly triggering to potentially lose another woman in my life” – and again the wry, understated smile of disbelief that history could repeat itself. 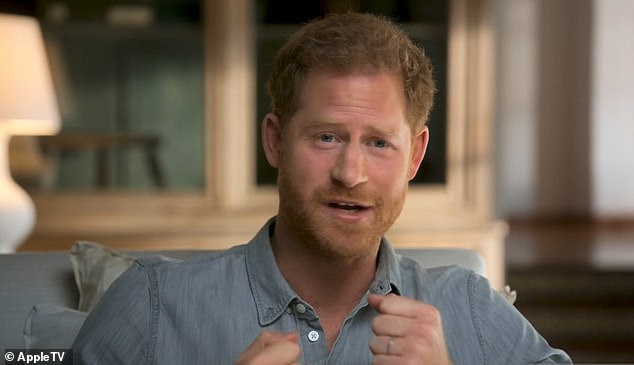 Judi said Harry makes comparisons to his mother’s circumstances using the pointing gestures and ending in a wry, mirthless laugh to suggest disbelief

‘He then says that it “comes back to the same people”, and Charles is shown on screen with his young son.

‘It is at this point that Harry appears to be “posting” his conversation directly at his father, even using the word “you” when he says “You chose”.’

When discussing his childhood and talking about his mother, Judi said Harry’s voice ‘deepens, softens and seems to crack as though he is near to tears’.

‘There is a micro-gesture of disgust as he wrinkles his nose at one point,’ she observed. ‘The angry Harry returns with Oprah now as he uses mime gestures like horses’ hooves to re-live the experience of Diana’s funeral. He re-lives his anger of the time here too, using pointing and stabbing gestures and with his eyes narrowing as he says “This is my mum”. His lower lip juts, his hands ball into fists and his blink rate becomes more rapid.’

Judi said there are some ‘subtle clues’ that suggest tension and anxiety within the prince, especially when he talks about his four years of therapy.

‘Harry becomes less assured at this point, fiddling with his wedding ring to suggest a desire to channel Meghan’s reassuring presence and speaking about himself in the third person – “for an individual who never thought they would need or do therapy” – rather than speaking personally.

‘Harry’s anger begins to become obvious here though as he mimes pushing away with both hands to describe how he was treated in the past.’

By the end of the series in episode five, Judi said we see Harry back in his ‘calm, adult power pose’, speaking to Oprah.

She observed that his ‘summary’ towards the end triggered new gestures ‘associated with self-calming or suppressing thoughts or emotions’.

‘He face-touches here, touching his lips in a self-comfort ritual before changing position to touch his face with his other hand. He also scratches his neck and plays with his wedding ring,’ Judi noted.

‘When he speaks he sounds on-message again, referring to his “awakening” and defining time via some invisible brick gestures that separate chunks of his past, present and future life into different themes. 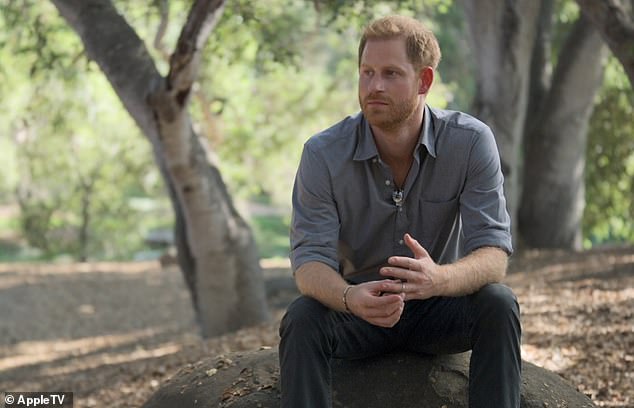 ‘There is huge emphasis here on his rubbing and fiddling with his wedding ring to suggest the support and comfort he gets from his wife and the pose and background imply a sense of reflective peace and solitude and found freedom with Meghan,’ Judi concluded

‘He places his finger to his lips and pauses when asked if he is still controlled by the media and then he rubs his lips to suggest mixed feelings of possible unease and a desire to self-comfort.’

When he discusses the couple’s previous explosive Oprah interview, Judi said Harry is ’emphatic’ that he ‘spoke the truth in the most compassionate way possible’ – despite many royal commentators claiming the Firm would be deeply hurt by their accusations of institutional racism and neglect.

It prompted the Queen to issue a statement after the programme aired, which stated: ‘The whole family is saddened to learn the full extent of how challenging the last few years have been for Harry and Meghan.

‘The issues raised, particularly that of race, are concerning. While some recollections may vary, they are taken very seriously and will be addressed by the family privately.’

‘Harry then uses mime gestures to mime a gap in front of his body as he describes leaving an “opening for reconciliation and healing”,’ Judi went on.

‘Harry is equally sharing and open when he speaks about how Meghan cried the night before the interview. He actually shares by miming the act and then miming the hug he gave her. His body language and his words are very emphatic here as he says she “cried and cried and cried”.

This revelation is followed by shots of Harry driving and sitting in a forest ‘reflectively’.

‘There is huge emphasis here on his rubbing and fiddling with his wedding ring to suggest the support and comfort he gets from his wife and the pose and background imply a sense of reflective peace and solitude and found freedom with Meghan,’ Judi concluded.

Heathrow will reopen T3 as a dedicated 'red list' terminal