Just six weeks after Prince Harry and Meghan were stripped of their cherished roles as president and vice-president of the Queen’s Commonwealth Trust, I hear of another dramatic departure.

I can disclose that the group’s chief executive, Nicola Brentnall, has left her role amid claims that she was too much of a ‘cheerleader’ for the California-based Duke and Duchess of Sussex.

Brentnall is also said to have caused anger by her involvement in Harry and Meghan’s infamous video chat last summer when they linked the Queen’s beloved Commonwealth to slavery. 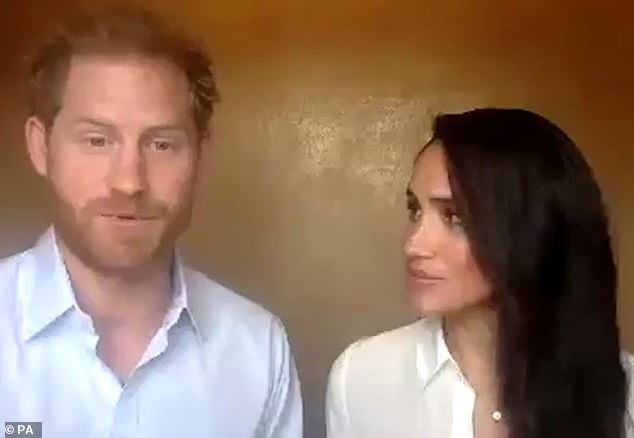 Call: Duke and Duchess in video. Nicola Brentnall, the chief executive of the Queen’s Commonwealth Trust, left her role amid claims she was too much of a ‘cheerleader’ for the pair

‘It’s fair to say that some important people felt it was better that she moved on,’ a source tells me.

‘We are an organisation that’s meant to celebrate the Commonwealth, yet she was letting, or even encouraging, Harry and Meghan to make it sound like we’re some backward movement stuck in a racist, colonial past.’

In their video call with young leaders, the Sussexes said the Commonwealth must acknowledge past ‘wrongs’ in the wake of the Black Lives Matter movement, even if it is ‘uncomfortable’, as they discussed historical injustice, unconscious bias and racism.

They claimed that otherwise it would be impossible for the ‘family of nations’ to progress.

This enraged courtiers, who pointed out that the Commonwealth was an organisation member states had joined voluntarily and had no ‘uncomfortable’ past.

The Queen is head of the Commonwealth and sees it as one of the greatest successes of her reign. 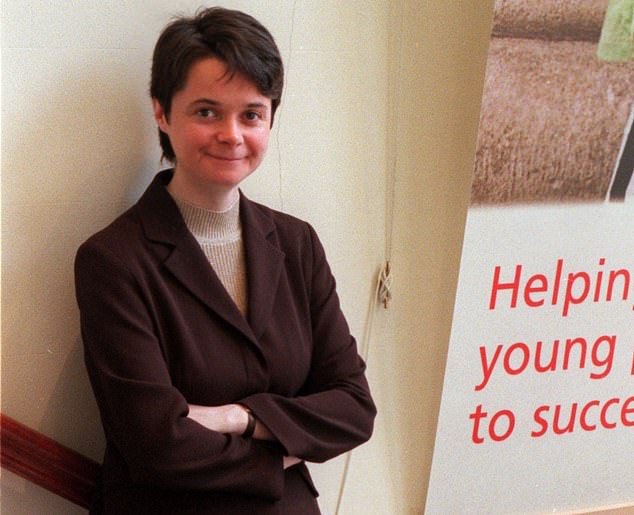 Ms Brentnall, pictured above, is also said to have caused anger by her involvement in Harry and Meghan’s infamous video chat last summer when they linked the Queen’s beloved Commonwealth to slavery

A spokesman insists that Brentnall’s time as boss has not been cut short.

‘In 2016, Nicola Brentnall committed to serve for five years as chief executive of the Queen’s Commonwealth Trust. With the team, she has taken the organisation from inception to being a recognised and respected youth organisation, ready to expand its grant-making and support programme to the next level.

‘Happily, she remains with us in a consulting role until June and will always be a member of Team QCT.’

With a £50 million pot of cash and national treasure Sir David Attenborough, Colombian pop superstar Shakira and Hollywood actress Cate Blanchett signed up as judges, the Duke and Duchess of Cambridge’s Earthshot environmental prize is all set to be a huge success.

However, the couple could struggle to capitalise, as I hear their Royal Foundation faces a battle over the name. It applied to trademark the word ‘Earthshot’ at the Intellectual Property Office for a vast range of media, from video, audio and multimedia recordings to podcasts, TV and internet broadcasting. But it has just been handed a ‘notice of threatened opposition’. In America, there is also a ‘notice of provisional refusal’.

The IPO declines to give details. Surely, Attenborough’s gravitas and Shakira’s charm could win them over?

So-called ‘street food’ has become trendy, but don’t you dare present Elizabeth Hurley with a gourmet burrito from a garishly painted van.

‘I can’t eat street food as my stomach is very delicate,’ the actress declares. ‘The last time I tried was when I was in Pakistan with [its President] Imran Khan.

‘He persuaded me to eat some kebabs and I projectile-vomited and ended up on a drip.’ 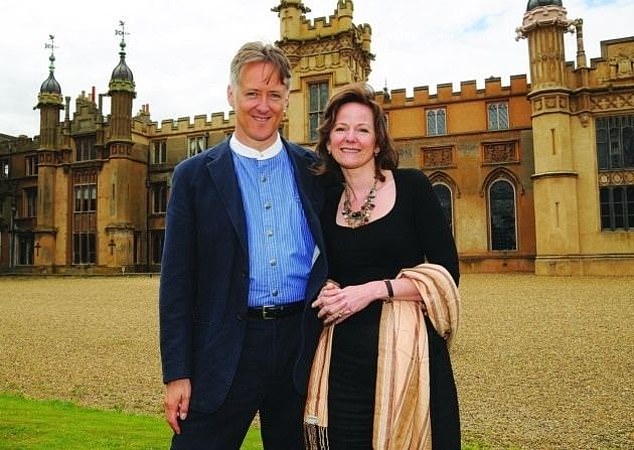 Martha Lytton Cobbold, 56, whose daughter is Burberry model Morwenna, pictured with her husband and screenwriter Henry

While the Duchess of Sussex gave a hellish vision of life in the Royal Family, her fellow American, Martha Lytton Cobbold, is keen to show life in the British aristocracy can be a success.

Martha is married to screenwriter Henry, heir to the 2nd Lord Cobbold and owner of Knebworth, the gothic Tudor pile in Hertfordshire where the Rolling Stones, Pink Floyd and Oasis have performed.

‘My husband’s grandma said to me, over a cup of tea, ‘The thing you need to realise, as a woman from another country, is that many people will believe what you are doing isn’t correct.’ ‘

Martha, 56, whose daughter is Burberry model Morwenna, admits on the Duchess podcast: ‘I absolutely have put a foot wrong. I’ve mispronounced names and titles and towns before, and perhaps I’ve been a little bit ballsy and too forward before.’

Now president of Historic Houses, she says: ‘You have to have thick skin, but it doesn’t mean you don’t get kick back or a punch back on occasion, but you just have to go for it. I quite like trying to rise to a challenge.’ 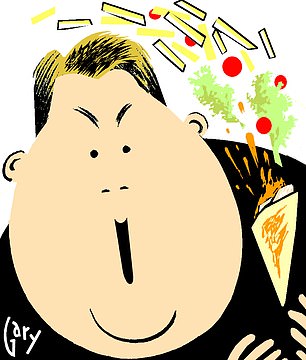 Despite boasting a fortune of more than £20 million, Gavin And Stacey star James Corden admits he has no qualms about stealing food

Despite boasting a fortune of more than £20 million, Gavin And Stacey star James Corden admits he has no qualms about stealing food.

The ambassador for WW, formerly Weight Watchers, has confessed that he and his fellow former History Boys actor Dominic Cooper raided a film set in London.

‘We still don’t know what film it was, but we went and got lunch,’ Corden admits.

‘We thought if you’re doing it wrong, do it strong. We walked up to the catering thing. We ordered chicken quesadillas, fries and salad, and just took it with us and left the set. We still don’t know what was filming there.’

Wondered how the super-rich are still managing to go abroad on holiday, despite all the travel restrictions?

Well, the fashionable Vivamayr detox clinic in Austria — where Kate Moss and Elizabeth Hurley have been regulars in the past — is offering to issue guests with medical certificates claiming their trips are necessary, so they would be allowed to travel.

‘When you book a stay with us, you will receive a medical letter from Vivamayr enabling you to travel to Austria without restriction,’ its newsletter reads.

A negative Covid test before the stay — which is a minimum of seven days and can cost up to £5,000 — is also required.

Naked muse who made the Sex Pistols look tame! An interview with punk queen Jordan Mooney

I know where it all went so wrong, Meghan BARBARA AMIEL

I know where it all went so wrong, Meghan BARBARA AMIEL