Prince Harry ‘can’t stand’ the Duchess of Cornwall and might deepen his rift with the royal family by ‘going after’ her and Prince Charles in his upcoming memoirs, Princess Diana’s biographer has claimed.

Speaking to the Telegraph Magazine ahead of the release of her new book, The Palace Papers, Tina Brown, 68, said the Duke of Sussex, 37, never made his peace with Prince Charles and Camilla’s relationship, and does not want Camilla to become Queen.

She added Prince Charles’ estranged son, who resides in California with his wife Meghan Markle, 40 and their children, Archie and Lilibet, is likely to voice his frustration in his memoirs, which are set to be published later this year. 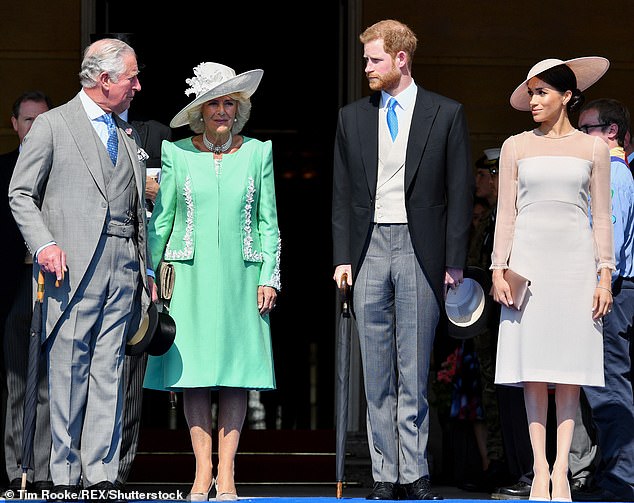 Speaking to the Telegraph Magazine ahead of the release of her new royal book, The Palace Papers, Tina Brown, 68, said the Duke of Sussex, 37, never made his peace with Prince Charles and Camilla’s relationship, and does not want Camilla to become Queen (pictured together with Meghan Markle on 22 May 2018)

Brown, who penned the Diana Chronicles in 2006, said: ‘William was disgusted about Meghan’s attack on Kate because she can’t answer back. But that’s nothing compared to how furious he’s going to be when this book comes out.

‘Because Harry’s not going to go after the Queen, she’s sacrosanct. And he probably won’t go after Kate, whom he’s very fond of. But he will go after Charles and Camilla and maybe William.

‘And that’s so unhelpful to them all at this particular moment; for William that’s the big cloud in their relationship right now.’

Brown, who reported on the royal family for years as Tatler’s editor-in-chief and Vanity Fair’s editor, said that Harry never warmed up to Camilla.

In her upcoming book, the author has quoted an unnamed courtier who told her than when Harry was eventually talked into being in the same room as Camilla, he would remain silent and shoot her angry looks. 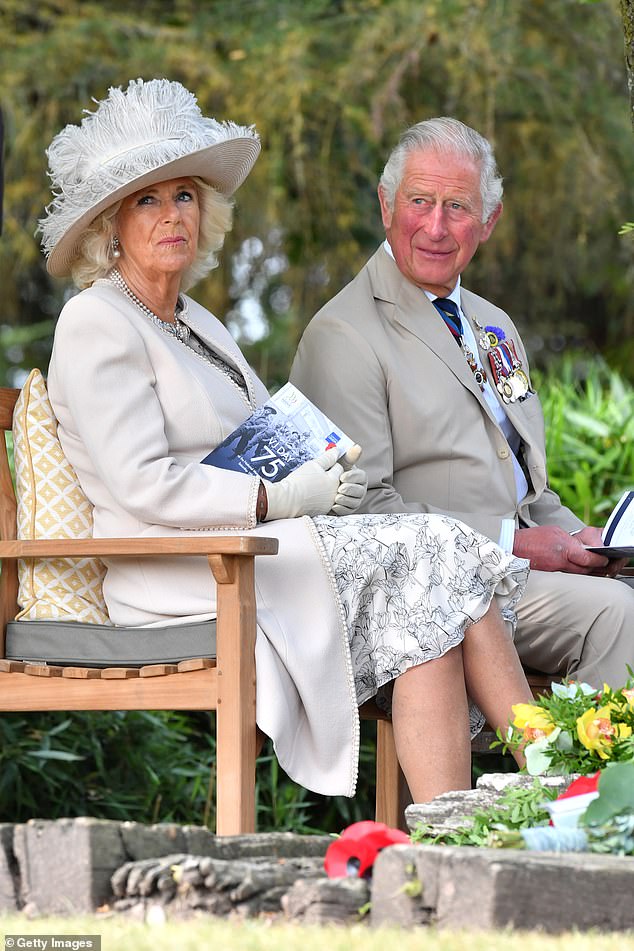 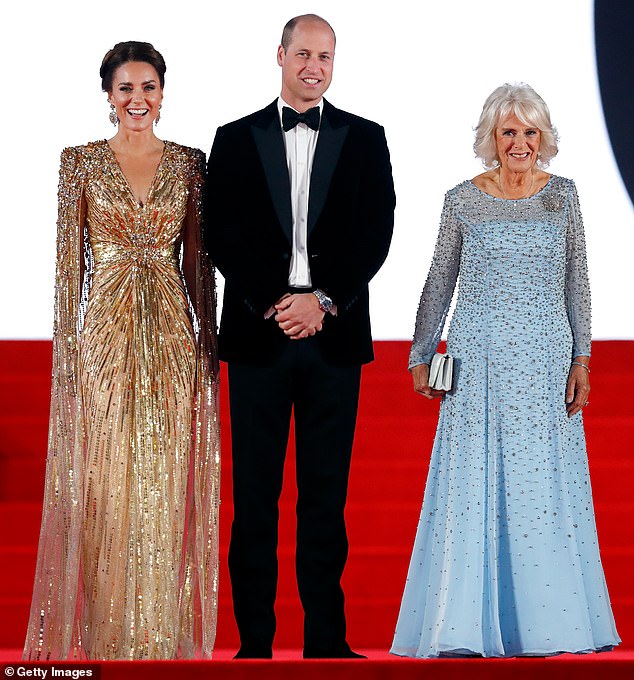 Meanwhile, Prince William has grown accepting of his father and Camilla’s relationship. Pictured together with Kate Middleton at the ‘No Time To Die’ world premiere at the Royal Albert Hall in September

She said that Prince William has grown to accept his father’s relationship with Camilla, but added the Duke of Sussex is ‘very angry’ that the Duchess of Cornwall will become Queen Consort when Prince Charles ascends to the throne.

William and Harry’s relationship first came under strain in the lead up to Megxit and has slowly worsened in the months since, with the Duke of Cambridge reportedly furious about his brother’s repeated attacks on the Royal Family.

In an extract of the Palace Papers shared with the Sunday Telegraph, Tina Brown revealed that the Duchess of Cornwall’s struggled with the Prince of Wales’ regimented lifestyle.

Before the pair were married in 2005, Camilla was Charles’ unofficial consort, a role that grew more and more difficult to keep as time went by.

The author claimed Camilla was happy to stay away from the limelight, but struggled to keep up with the demands of the Prince of Wales’ regimented lifestyle.

The author claimed that Prince Charles stuck to the same routine everyday and that Camilla’s struggle with being on time was a source of tension in the couple.

If the couple were headed somewhere and Camilla would ask Charles where they wer4e going, he would snap at her and asked if she had not read the memo about their outing, Brown claimed.

A source close to Camilla at the time told Brown that the Duchess of Cornwall began to feel sympathy for Princess Diana’s various discountents.

Eventually, however, after a push from Clarence House’s press secretaries, the couple married on 9 April 2005.

He was particularly incensed by the way his wife the Duchess of Cambridge was targeted.

The pair have been photographed together just twice since Harry and Meghan stepped down from royal duties: the funeral of their grandfather the Duke of Edinburgh in April last year, and the unveiling of a statue in honour of their mother Princess Diana last summer.

Speaking to the Daily Telegraph, Tina said the rift with Harry was a detriment to the royal family because Harry, alongside Kate, is one of the only people who could keep Prince William grounded and avoid for him to become pompous.

‘One of his close people told me that everyone talks about how much Harry needed William, and he did, but William also needed Harry because all those friends you think are so real, well, they still know you’re going to be king,’ she said.

‘Only William’s wife and his brother are going to be straight with him.

‘And Harry could tease his brother and bring him down to earth. William depended on that, I’m told.

‘There was a danger William was headed towards pomposity and Harry wouldn’t let that happen.’

It comes after the Sussexes’ biographer insisted Prince Harry only wants to speak positively about the Queen in his memoir.

Finding Freedom author Omid Scobie said Harry ‘really wants to celebrate her life and his relationship with her in that book.’

Speaking on the Royally Obsessed podcast, Omid said the book will celebrate the life and reign of Her Majesty.

He said: ‘Harry really is going out of his way to make sure that there isn’t material in there [the book] that can be seen as negative towards the Queen or her reign in any way whatsoever.

‘He really wants to celebrate her life and his relationship with her in that book.

‘I think as much as the press want this to be a burn book and an attack on the institution, this is more just about his story.’

‘Of course, his story is so much more than just the few years of his life as the Duke of Sussex.

‘I think for people expecting that warts and all moment, it’s not going to happen. That said, it’s still going to be fascinating.’

The Royal Family has been left deeply concerned by Harry’s decision to secretly collaborate with Pulitzer-winning ghostwriter JR Moehringer on what his publishers described as ‘the definitive account of the experiences, adventures, losses, and life lessons that have helped shape him’.