Prince Harry landed work in US with visa for people with ‘extraordinary ability’, experts claim


Prince Harry could be working in the US on a visa designed for people with ‘extraordinary ability’, experts said yesterday.

Canadian singer Justin Bieber and Australian actor Hugh Jackman have used the O-1 visa which lasts up to three years.

The Duke of Sussex, 36, now has two jobs and TV and radio projects in the US, prompting many to question how he obtained a visa. 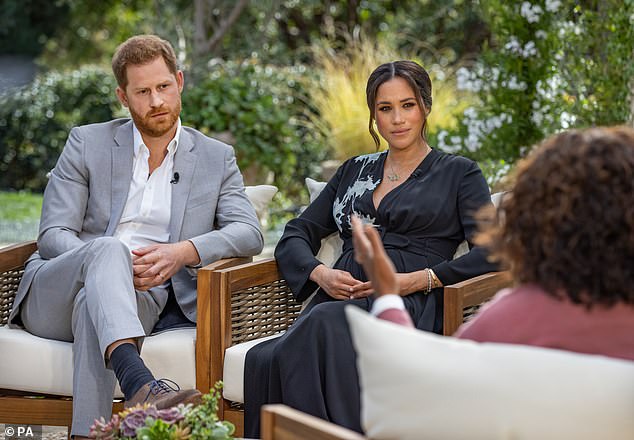 As a British citizen, Harry was not automatically entitled to seek employment after moving to California last year with American wife Meghan, 39.

He could have applied for a green card, but this comes with significant income tax implications and can take up to 21 months to process.

The O-1 visa website says it is for ‘an individual who possesses extraordinary ability in the sciences, arts, education, business or athletics or who has a demonstrated record of extraordinary achievement in the motion picture or television industry and has been recognised nationally or internationally’.

Harry’s work with Invictus Games for injured servicemen could potentially qualify him.

And his recent interview with Oprah Winfrey certainly earned millions for the TV industry.

O-1 visa approval can take just weeks and finding a US citizen to serve as a referee would not have been a problem – Harry’s friends include ex-President Barack Obama. 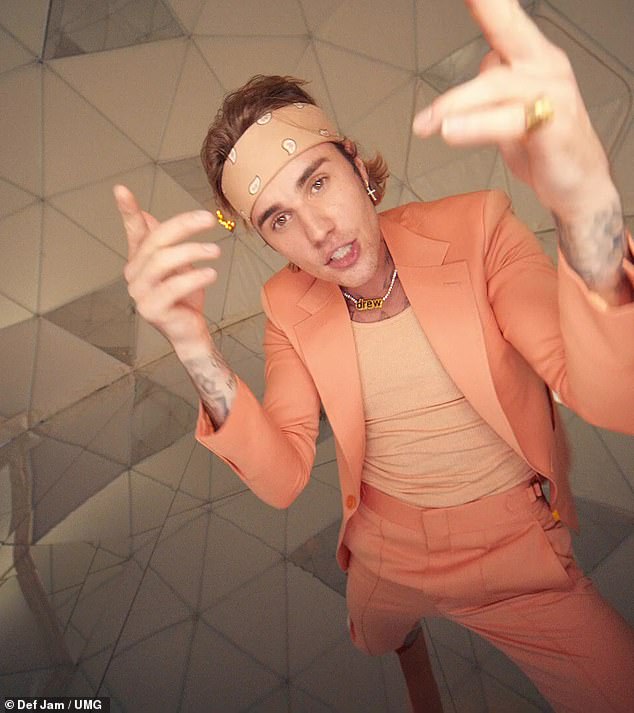 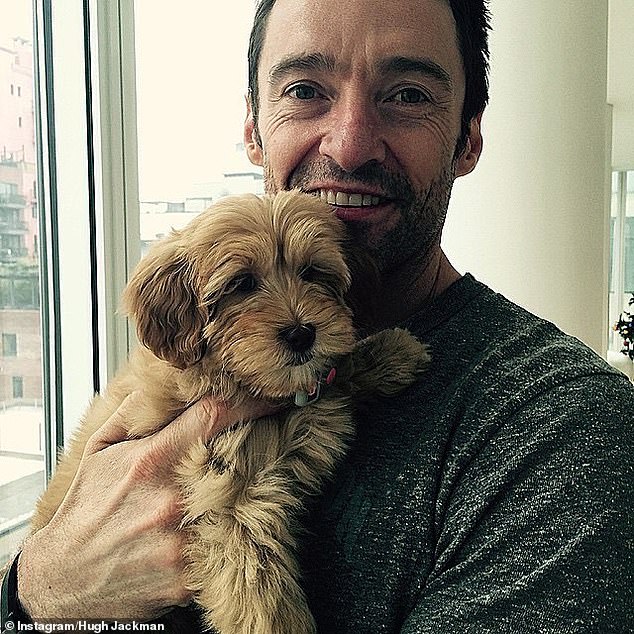 Immigration expert Doug Lightman, of Lightman Law in New York, said: ‘Harry would have no problem getting the O-1 because he’s a prince.

‘He’s travelled all over the world… and there is his work with Invictus. It’s going to be enough to qualify him.’ Harry’s representatives did not respond to requests for comment.

Meanwhile, he hit the ground running in his new job yesterday by posting a motivational quote on the Instagram account of BetterUp, the life coaching firm he has joined as ‘chief impact officer’.

He wrote: ‘Self-optimisation is not about fixing something that’s broken. It’s about becoming the best version of ourselves with whatever life throws at us.’

Harry has landed his first job since quitting as a royal.

He is to become an executive at a Silicon Valley life-coaching firm in a deal which could net him millions.

Harry has been appointed ‘chief impact officer’ for San Francisco-based start-up BetterUp Inc. As well as having a full say in ‘strategic’ decisions, the prince – who had vowed not to cash in on his royal credentials – will become a public face for the business. His photograph is already prominently displayed on the firm’s website alongside the words ‘Prince Harry, The Duke of Sussex‘.

The firm’s founder has refused to say whether Harry is being paid a salary.

Industry insiders suggest he is more likely to have been given equity in the company, which is valued at up to £1.25billion, despite never having worked in the corporate world.

The new role comes on the back of lucrative deals for the Sussexes following their controversial move to California. They are making programmes and podcasts for media companies Netflix and Spotify, while Meghan has invested in a firm making ‘wellness lattes’. 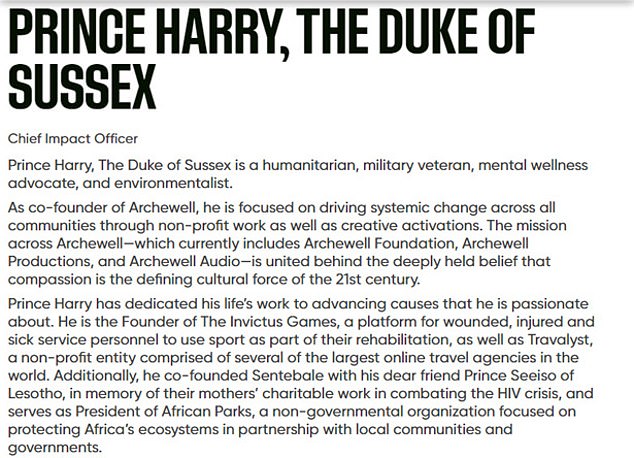 A statement on the company’s website said: ‘Prince Harry, The Duke of Sussex is a humanitarian, military veteran, mental wellness advocate, and environmentalist’ 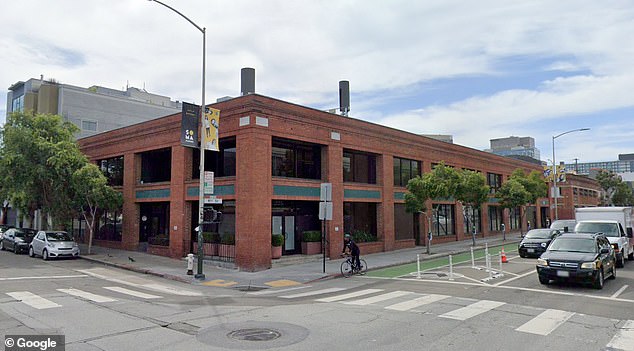 Harry, who has served in the British Army but has no corporate experience, will not manage any employees but will be expected to appear at special company events and spend time at the company’s San Francisco for meetings once Covid restrictions are lifted (pictured)

In a statement, Harry said he was excited to be joining BetterUp and proclaimed that he wanted to ‘lift up critical dialogues around mental health, build supportive and compassionate communities, and foster an environment for honest and vulnerable conversations’. He added: ‘Self-optimisation is not about fixing something that’s broken. It’s about becoming the best version of ourselves, with whatever life throws at us – someone who is ready for the next challenge and can meet setbacks with courage, confidence and self-awareness.’

Harry, 36, who has spoken openly about his own mental health issues and how he sought professional help to cope with the loss of his mother, Princess Diana, told the Wall Street Journal that he had been using BetterUp’s app and a coach for several months.

The Wall Street Journal added: ‘The role is the latest foray into business for the duke who, with his wife, Meghan Markle, relinquished roles as full-time working members of the British monarchy and have tapped into their celebrity with a string of lucrative deals.’

It quoted Harry as saying: ‘I intend to help create impact in people’s lives.’

BetterUp chief executive Alexi Robichaux said he was introduced to Harry through a mutual friend and began to speak about the role with him last autumn. He insisted the prince’s appointment wasn’t just window dressing because of who he is, saying: ‘It’s a meaningful and meaty role.’

Harry’s statement on the BetterUp website … and how his royal title was displayed with a black and white photograph.

I am really excited to be joining the BetterUp team and community! Thanks for having me.

I firmly believe that focusing on and prioritising our mental fitness unlocks potential and opportunity that we never knew we had inside of us.

As the Royal Marine Commandos say, ‘It’s a state of mind.’ What I’ve learned in my own life is the power of transforming pain into purpose.

During my decade in the military, I learned that we don’t just need to build physical resilience, but also mental resilience. When I first met Alexi [Robichaux], we instantly recognised a shared passion for helping others realise their full potential.

As our conversations continued, it became even more clear that we hold a similar philosophy on mental health: that we must proactively take care of our minds. I’ve personally found working with a BetterUp coach to be invaluable. And because we believe in strengthening our own mental fitness, our entire Archewell team also has access to BetterUp coaching.

As BetterUp’s first Chief Impact Officer, my goal is to lift up critical dialogues around mental health, build supportive and compassionate communities, and foster an environment for honest and vulnerable conversations. And my hope is to help people develop their inner strength, resilience, and confidence.

The job of chief impact officer is rare in the corporate world but more common in charity sector, where it can command a salary of £80,000 upwards. However, the true worth of Harry’s deal could run into the tens of millions.

Mr Robichaux declined to tell the Wall Street Journal how Prince Harry would be compensated, or any details of his employment agreement, but said he would be joining the firm’s leadership team as an ‘officer of the corporation’.

The US newspaper made clear that the prince would not manage any employees, but is likely to spend time in the company’s San Francisco headquarters once it is safe to do so, and to participate in meetings. Significantly, Mr Robichaux said he is also expected to appear at special company events – indicating Harry will become a ‘face’ of the brand.

He admitted that the company had been attracted to the prince by his ‘prior advocacy work as a member of the Royal Family’, particularly in the arena of mental health, as well as his experience in the military, and argued that Harry ‘could bring a different perspective to the company’ as ‘he comes from a very different background’.

Highlighting his own mental health mantra, Harry said he wanted to encourage people not to feel embarrassed seeking help, adding: ‘Often because of societal barriers, financial difficulty, or stigma, too many people aren’t able to focus on their mental health until they’re forced to.

‘I want us to move away from the idea that you have to feel broken before reaching out for help.’

Mr Robichaux said senior executives were keen to have Harry on board. ‘He will obviously have the whole organisation sprinting to help him,’ he said.

The company’s app – which includes virtual classes – costs £2,600 a year. There is also a network of more than 2,000 coaches. It has already been used by a number of large companies.

PR guru Mark Bukowski told MailOnline it is yet another step for the Sussexes towards the building of their dream of a billion dollar brand in the US, after big money deals with Netflix and Spotify.

Mr Bukowski added: ‘He’s got this woke job title of Chief Impact Officer and today’s announcement has done just that for the company, had a huge impact.

‘This announcement is worth millions to this startup in free publicity and if he’s done a good deal with a salary as well as shares in the business, it will probably make millions for Harry too.

‘He could never have done this deal if he was still a working member of the Royal Family. They’ve announced the job just after the Oprah interview, amid an outpouring of support for the couple in the US. They’re on a crest of a wave there. If the company is as good as Harry says, it is a smart move. But if it’s a pile of poop, he won’t have to many more chances to cash in.’

He added: ‘If people weren’t clear on Harry and Meghan’s business strategy, they should be now.’

BetterUp employs therapists and executive coaches on contracts, who are paired with clients to provide mental health coaching by video link through the app. Most of its clients are in the United States, but it does have executive coaches employed in the UK.

The tech firm that works with corporate giants including Facebook, Google, Snap Inc, NASA, Hilton and Warner Brothers. There will be some raised eyebrows because Harry has spoken widely on the need to protect the environment, but BetterUp has also worked with oil giant Chevron.