Prince Harry speaks about how he dealt with Meghan feeling suicidal


BREAKING NEWS: Harry speaks about how he dealt with Meghan feeling suicidal and the importance of saying ‘you’re not alone’ as he reunites with Oprah for town hall episode reflecting on their 5-part Apple TV series on mental health

Prince Harry has spoken candidly about how he dealt with learning Meghan Markle was feeling suicidal during a new episode of his Apple+ TV series.

Speaking candidly with Oprah during a bonus town hall episode following the conclusion of their five-part series, The Me You Can’t See, the Prince encouraged those who were suffering to speak up.

He also stated it was important for loved ones to simply provide reassurance after learning of the news.

‘So many people are afraid of being on the receiving end of that conversation [about suicide] because they don’t  feel like they have the right tools to give the right advice,’ Harry told Oprah.

‘But what you [want] to say is “You’re there”. Listen, because listening and being part of that conversation is without doubt the best first step that you can take.’

The Prince and Oprah agreed that the most important thing they have heard from experts during their series is the  ‘you are not alone’. 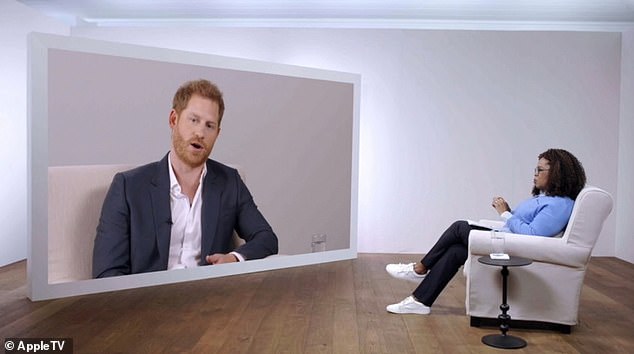 Shohei Ohtani scratched from start, not because of an injury but transportation issues

Cargo Bar and The Winery: You and your friends can now enjoy pop-up IGLOOS

United Nations: The ozone hole over Antarctica has completely disappeared

An Emirati academic on the Saudi decision regarding the headquarters of foreign companies: one million Welcome to the competition

Olympic TV broadcaster vows to not sexualise feminine athletes by specializing in their our bodies following...