The Duke and Duchess of Cambridge have shared a loving tribute to the Duke of Edinburgh online after he died at Windsor Castle at the age of 99.

Prince William, 38, and Kate Middleton’s, 39, official website for the Royal Foundation has been updated to feature a large black-and-white photograph of Prince Philip stretching across the full-width of the website.

The picture shows the late royal grinning broadly at the camera dressed formally in a suit, while the website also featured the official statement from the Royal Family announcing Philip’s death.

It comes after the members of the Royal Family also changed their social media profile images to monograms and the crests following the Duke’s death on Friday.

The Royal Foundation’s homepage has been updated to pay tribute to Prince Philip, featuring a large black-and-white photograph of the Duke of Edinburgh (pictured)

The couple also posted a statement online, which read: ‘It is with deep sorrow that Her Majesty The Queen has announced the death of her beloved husband, His Royal Highness The Prince Philip, Duke of Edinburgh.

‘His Royal Highness passed away peacefully this morning at Windsor Castle.

‘The Royal Family join with people around the world in mourning his loss.

‘Further announcements will be made in due course. Visit www.royal.uk to find out more.’ 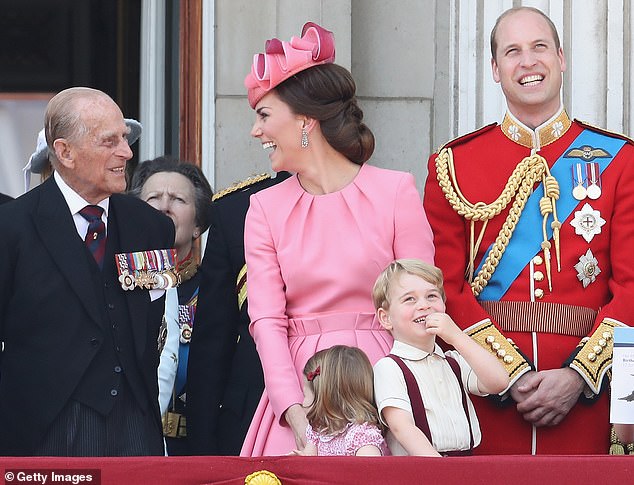 The Royal Foundation is a charity which supports the work of Prince William and Kate, whose recent projects revolve around supporting Covid-19 frontline workers, conservation, early years, mental health, and emergency responders.

The Duke, 38, and Duchess, 39, of Cambridge’s touching tribute to Prince Philip comes after William withdrew from the BAFTA awards coverage following the death of his grandfather.

This year’s film awards were handed out over two nights in largely virtual ceremonies, with presenters attending London’s Royal Albert Hall in person for Sunday’s broadcast.

William, who is president of BAFTA, was due to feature on Saturday April 10 in a pre-recorded conversation with costume designer Jenny Beavan and make-up and hair designer Sharon Martin, talking about filming in lockdown and the craft of film-making.

The following day, he was to deliver a speech via video, celebrating the resilience of the film industry over the past year – but BAFTA has confirmed he will no longer be taking part in the ceremony. 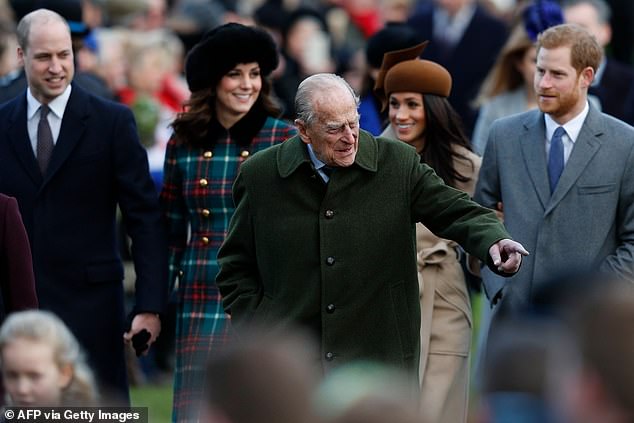 The Duke of Cambridge, 38, also withdrew from the BAFTA awards coverage following the death of his grandfather (both pictured with Kate, Prince Harry and his wife Meghan in 2017)

The Duke of Edinburgh, who died on Friday at Windsor Castle at the age of 99, was BAFTA’s first president, serving from 1959 to 1965, and continued to support the organisation throughout his life.

BAFTA said in a statement: ‘In light of the Duke of Edinburgh’s passing, the Duke of Cambridge will no longer be part of BAFTA programming this weekend.

‘Our thoughts are with the royal family, to whom we offer our deepest sympathy at this time.’

The Queen announced her husband’s death at midday on Friday as the Union Flag was lowered to half-mast outside Buckingham Palace.

The Duke of Edinburgh’s funeral, which he planned himself, will be televised around the world on Saturday.

Philip’s coffin was in Her Majesty’s private chapel of worship at their Berkshire home before being moved to the nearby Albert Memorial Chapel, where he will rest during seven days of national mourning ahead of his scaled-back funeral next weekend.

Only around 30 relatives are expected to attend the family funeral at St George’s Chapel, stripped back due to Britain’s ongoing lockdown. Britons are being warned to stay at home and watch on TV to avoid spreading coronavirus.

His grandson Prince Harry is expected to return to the UK and be among the small number of mourners at the funeral, but his pregnant wife Meghan will not accompany him.