Prince William and Kate Middleton have released a touching photo of the Duke of Edinburgh and the Queen with their seven great-grandchildren ahead of Prince Philip’s funeral on Saturday.

The photograph, which was taken at Balmoral Castle in 2018, by the Duchess of Cambridge, shows Prince Philip with his arm around Isla, while the Queen, 94, can be seen holding a then-baby Prince Louis in her arms.

Prince George and Princess Charlotte can be seen offering a cheeky smile in the picture, while Savannah Phillips poses alongside Mia and Lena Tindall.

A second picture of Her Majesty and her husband was share on the Duke and Duchess’ Instagram page, and showed the couple posing with Prince George and Princess Charlotte during a visit to Balmoral in 2015.

The caption read: ‘Today we share, along with Members of the Royal Family, photographs of The Duke of Edinburgh, remembering him as a father, grandfather and great-grandfather.’

It comes after it was revealed that William and Prince Harry will not meet in person until their grandfather’s funeral, with the Duchess of Cambridge helping them put on a ‘unified’ front for the Queen. 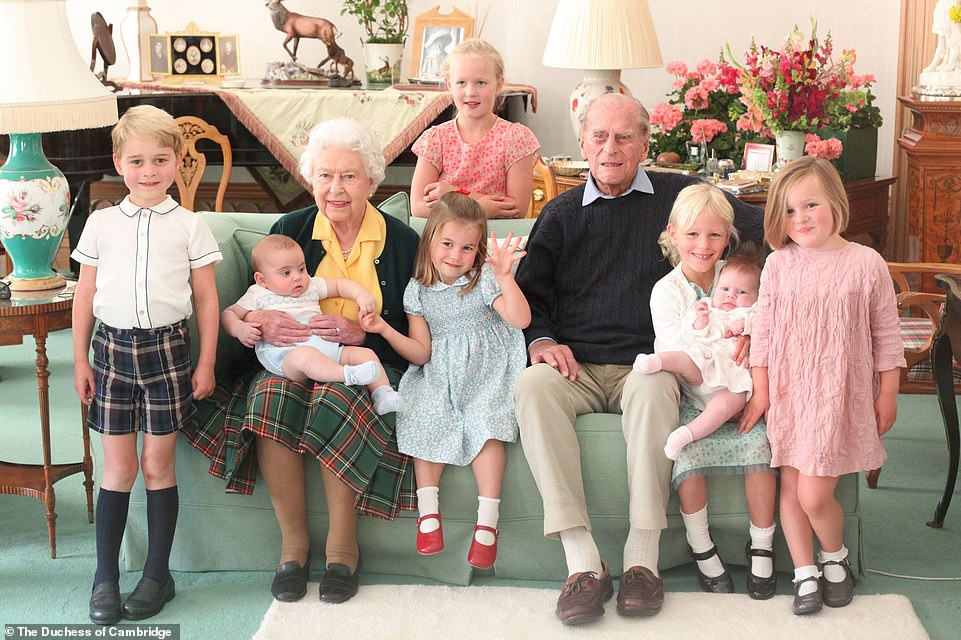 Prince William and Kate Middleton have released a touching photo of the Duke of Edinburgh and the Queen with their seven great-grandchildren. The image shows the 94-year-old monarch and her husband, who died on Friday aged 99, with Prince George, Prince Louis, Savannah Phillips, Princess Charlotte, Isla Phillips holding Lena Tindall, and Mia Tindall

The photograph does not include the couple’s three youngest grandchildren, who were born in the last few years.

Prince Harry and Meghan Markle welcomed their son Archie Harrison in May 2019, while Princess Eugenie and Zara Tindall have both welcomed sons into their families in the last few months.

This is not the first time Kate, one of the world’s most photographed people, has gone behind the lens and released her own pictures.

The duchess was named as the new patron of the Royal Photographic Society earlier this year following her flourishing passion in photography. 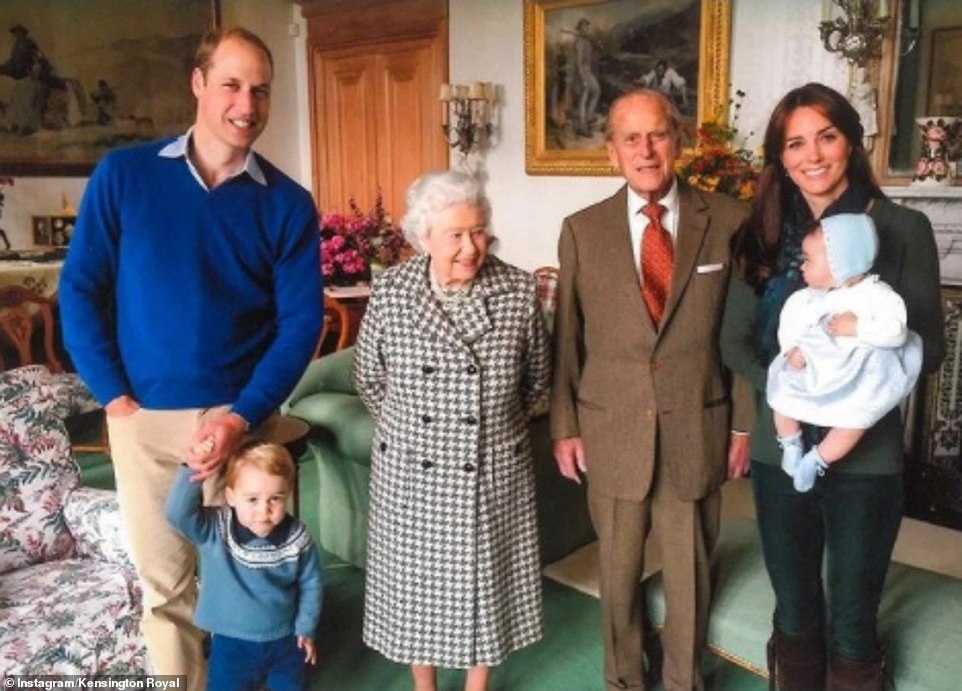 A second picture of Her Majesty and her husband was share on the Duke and Duchess’ Instagram page, and showed the couple posing with Prince George and Princess Charlotte during a visit to Balmoral in 2015

A history of art graduate, the duchess has previously been praised for her photographic portraits of her children, Prince George, Princess Charlotte and Prince Louis.

Kensington Palace has often published photos taken by Kate to mark milestones in her children’s lives, such as birthdays and first days at nursery.

The duchess began the tradition in 2015 when she took the first official portraits of Princess Charlotte, rather than hiring a photographer.

Earlier today Princess Eugenie penned an emotional tribute to Prince Philip as she said she would remember his ‘spectacular life’.

The Queen‘s granddaughter, 30, shared the lengthy post on Instagram alongside two pictures of her with the Duke of Edinburgh, who passed away last Friday at the age of 99. 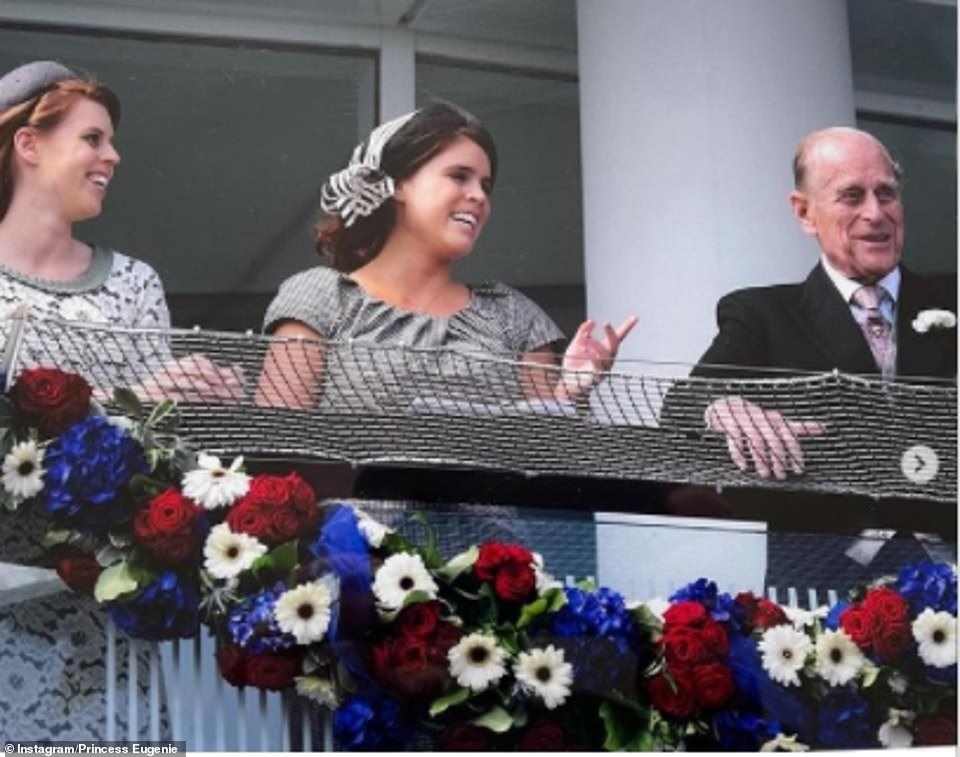 Earlier today, Princess Eugenie shared photographs alongside her grandfather and an emotional tribute to Prince Philip (pictured, On The Royal Balcony At The Investec Derby Festival At Epsom In Surrey in 2017)

Earlier this year, Eugenie and her cousin Zara both paid tribute to their beloved grandfather by naming their newborn sons after him.

Due to lockdown restrictions, it is thought that Eugenie and Zara never had the opportunity to introduce their newborn sons to their grandfather before his death yesterday morning at the age of 99.

The photos were released as the Duchess of Cambridge is said to be willing to act as ‘peacemaker’ between Prince Harry and William ahead of Prince Philip’s funeral, with the brothers vowing to set aside their rift and try to reset their strained relationship to honour the memory of the Duke of Edinburgh.

The brothers are believed to have already spoken on the phone since Harry landed at Heathrow ahead of seeing each other face-to-face for the first time in a year at Windsor Castle this weekend.

Harry described Kate as the ‘big sister I never had’ when she became engaged to William 11 years ago – but the siblings’ relationship became fractured following his decision to emigrate to the US and be interviewed by Oprah Winfrey with his wife Meghan Markle.

The Sussexes accused the Royal Family of racism, with Harry claiming William is ‘trapped’ and saying Prince Charles cut him off financially. Kate was also accused by Meghan of making her cry in a row over bridesmaids dresses in the bombshell TV interview last month, but Kate is said to be pushing for the brothers to make up.

Saturday’s funeral will certainly remind the brothers of their shared grief at another royal funeral more than two decades ago – when, as young boys, both walked behind their mother Princess Diana’s coffin in 1997.

Harry is now in quarantine, but can attend the funeral in line with government rules that make exceptions for such occasions. Meghan, who is pregnant with their second child, was advised by her doctor not to make the long trip.

A royal source told the Daily Telegraph: ‘They know it is not about them on Saturday – it is about honouring their grandfather’s memory and supporting their grandmother. I would be extremely surprised if that wasn’t front and centre of both their minds. They will be keen to spend time together as a family, in the same time zone for once.’ Another insider said: ‘The entire focus is on the Queen. No exceptions. A family unified.’

The brothers will meet face-to-face for the first time in more than a year on Saturday. The brothers also plan to unveil a sculpture in memory of Diana in the gardens at Kensington Palace, together this summer.

In two statements with very different tones released 30 minutes apart on Monday, Prince William praised his grandfather’s lifetime of service to ‘Queen, country and Commonwealth’ before Harry declared: ‘He was my grandpa: master of the barbecue, legend of banter, and cheeky right ’til the end’.

William’s words focused on duty, continuing Philip’s work and the need to support the Queen, with some royal watchers pondering if this was, in part, a criticism of his brother who quit as a frontline royal and emigrated to the United States with his wife.

Harry is understood to have chosen to self-isolate at Frogmore Cottage at Windsor Castle where the Queen is based, rather than at Kensington Palace where his brother lives with his wife and three children.