Australian Commodore Guy Holthouse has described his coveted invite to represent his nation at Prince Phillip’s funeral as ‘humbling’ – and claimed the royal would have been a senior military man had he not met the Queen.

The Duke of Edinburgh, who died peacefully in his sleep aged 99 on April 9, was farewelled at St George’s Chapel at Windsor Castle on Saturday in an intimate 30-person ceremony.

Mr Holthouse, Australia’s Defence Advisor in the UK, was positioned in front of the chapel as part of Prince Philip’s final homage to Australia, watching as his coffin arrived on the back of a LandRover before being carried inside.

The invite was issued to fulfil the Duke’s wish to recognise the country he first visited as a teenager in the Royal Navy. 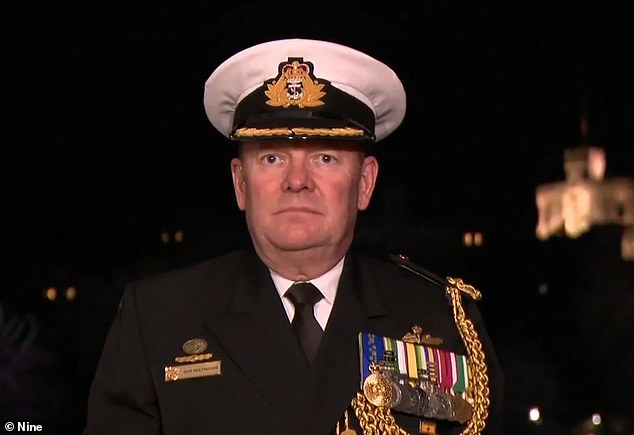 Mr Holthouse said he was ‘honoured’ to take part in the ceremony, which he described as ‘an amazing military send-off for an amazing man’.

‘[I felt] both honoured and humbled to participate in a moment in history in a very small way, and to honour a man and be part of his wishes for the Australian Defence Force, and indeed for Australia, to attend his funeral,’ he said, appearing on Weekend Today on Sunday.

‘For me it will be a moment in time I will never forget.’

The Duke of Edinburgh’s coffin was covered in his personal standard and carried his sword, naval cap and a wreath of flowers with a handwritten note from his wife.

Representatives of other Commonwealth nations including Canada, New Zealand and Trinidad and Tobago also stood guard alongside Mr Holthouse.

Numerous military rituals, including a naval hymn and readings of the Duke’s military acknowledgements, were performed at the ceremony – all at the request of the Prince. 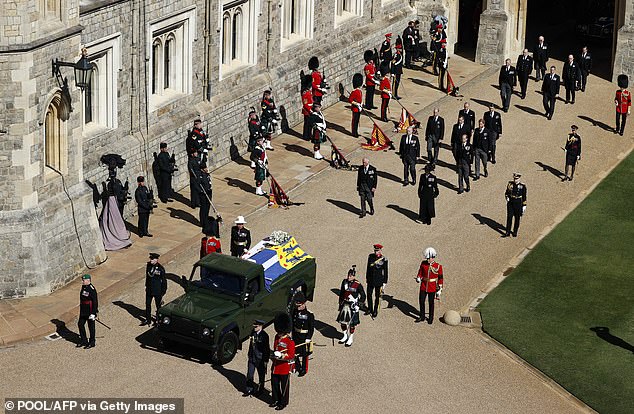 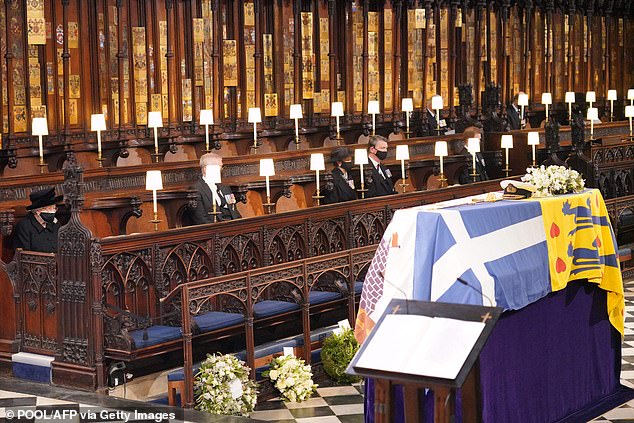 ‘It all suggests he was first and foremost a military officer and that never left him,’ Mr Holthouse told The Age.

‘Prince Philip’s engagement with the Australian Defence Force actually began in 1940, when he came out to Australia as a midshipman on board battleship HMS Ramillies and began escorting Australian and New Zealand convoys through the Suez Canal.

‘He was an exceptional officer and I’m sure that if he hadn’t met Her Majesty he would have gone on, no question, to become a very senior member of the Royal Navy.’

Prince Philip, who was due to turn 100 on June 10 this year, visited Australia on more than 20 occasions during his life.

He was 18-years-old when he first sailed into Sydney Harbour on the British battleship HMS Ramillies on March 14, 1940. 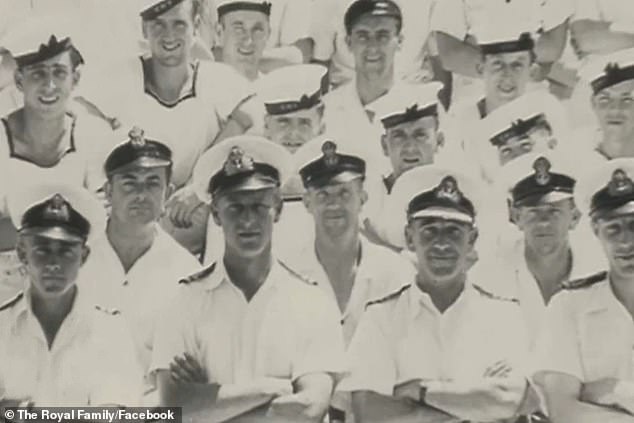 Prince Philip first sailed into Sydney Harbour on March 14, 1940, as an 18-year-old on the British battleship HMS Ramillies. He is in the front row, second from the left. 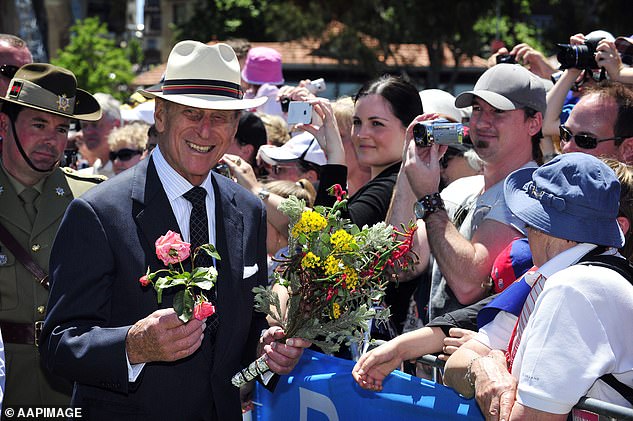 Prince Philip visited Australia on more than 20 occasions during his life. He is pictured greeting the public during the Great Aussie Barbecue in Perth in 2011

The midshipman, then known as the Prince of Greece, spent a couple of weeks in Sydney enjoying dances and parties with the city’s elite.

The ship then travelled on to Melbourne and Prince Philip spent a week at a sheep station, before spending four months protecting the Australian Expeditionary Force in the Indian Ocean.

Prince Philip returned to Australia in late 1945 and stayed at Admiralty House in Kirribilli.

He visited the home of the Greek Consul-General and a Greek Orthodox Church and was seen surfing at Palm Beach, in Sydney’s north, and at Bondi Beach, to the city’s east.

A shot of him laughing as he fell out of the revolving barrel at Luna Park made the front page of The Daily Telegraph. 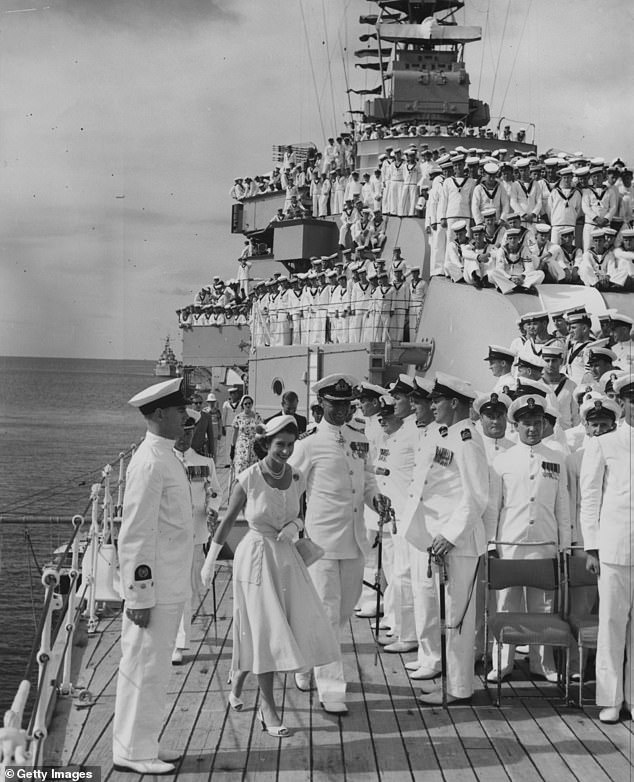 Queen Elizabeth II and Prince Philip, Duke of Edinburgh, on board HMAS Australia at sea off Townsville, Queensland, during a royal tour of Australia in March 1954 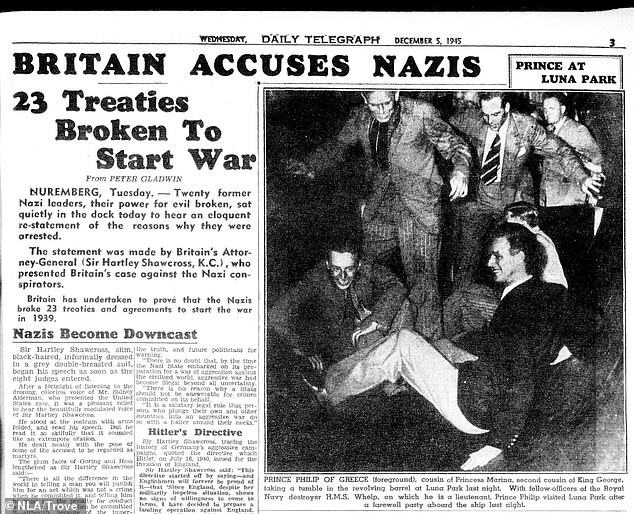 A clipping from the Daily Telegraph on December 5, 1945 shows Prince Philip “taking a tumble” at Luna Park after a farewell party aboard hit the HMS Whelp earlier in the night

Prince Philip’s next visit to Australia was in 1954, when he accompanied the newly-crowned Queen Elizabeth II for an epic eight-week tour.

They were embarking on a six-month tour of the British Empire only eight months after the Queen’s Coronation, as Prince Charles and Princess Anne stayed in London with a nanny.

In 58 days, the duke visited every state capital, except Darwin, and toured regional centres from Burnie in northern Tasmania to Kalgoorlie in Western Australia and Broken Hill, a mining town in the far-west of New South Wales, with up to three-quarters of Australians catching a glimpse of the Queen and Prince Philip.

Two years after his first official visit down under, he returned to Australia without the Queen to officially open the Melbourne Olympic Games, the first ever summer Olympics to be held in the southern hemisphere.

Prince Philip’s last trip to Australia was in 2011 with the Queen. 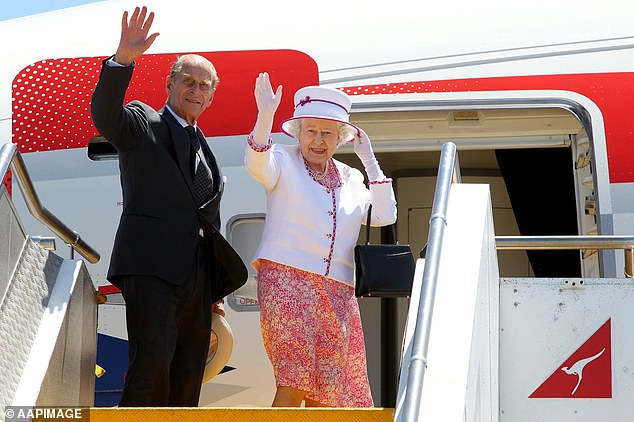 The Queen wiped away tears as she was forced to mourn her husband of 73 years  alone away from her family amid Covid-19 protocols in St George’s Chapel on Saturday.

Her Majesty bowed her head in reverence as she accompanied her beloved husband’s coffin on its final journey, with the royal procession following behind, led by Philip’s children Prince Charles, Princess Anne, Prince Andrew and Prince Edward.

The grandchildren, including Prince William and Prince Harry, followed but the feuding brothers were separated by their cousin Peter Phillips, viewed as a ‘peacemaker’ between the two.

After the eight minute procession and the 50 minute service, his coffin was lowered into the Royal Vault.

An Australian memorial for Prince Phillip will be held at St Peter’s Cathedral in Adelaide on Sunday evening officiated by the head of the Anglican Church in Australia, Archbishop of Adelaide Geoff Smith. 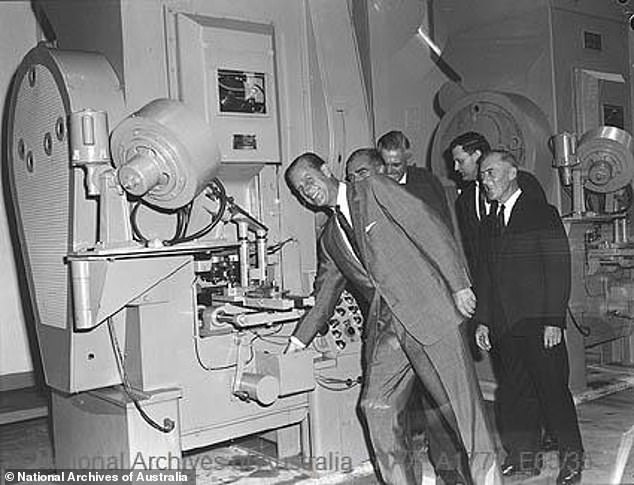