Prince William and Kate Middleton are looking for a new housekeeper to join the team at Kensington Palace – and trustworthiness is paramount.

The family were keen to stress in the advert, placed on the royal vacancies website, the importance of their new team member’s ability to ‘maintain confidentiality and exercise discretion’.

The role, based at The Duke and Duchess of Cambridge‘s royal residence in West London, is described as an ‘exciting opportunity’. 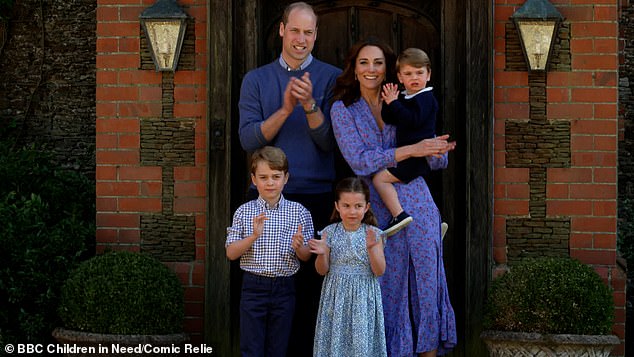 In the latest job posting for Kensington Palace, the royal residence of The Duke and Duchess of Cambridge, the job advert states the potential new employee must ‘maintain confidentiality and exercise discretion at all times’ (Pictured, The Duke and Duchess with their three children  (left to right) George, Charlotte and Louis) 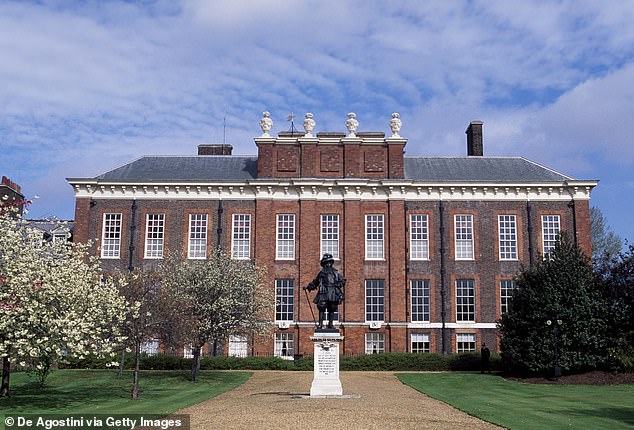 The new role on offer and currently accepting applications will see the new employee working as a housekeeper at the royal home in Kensington but also potentially travelling with the family too. Pictured: Kensington Palace 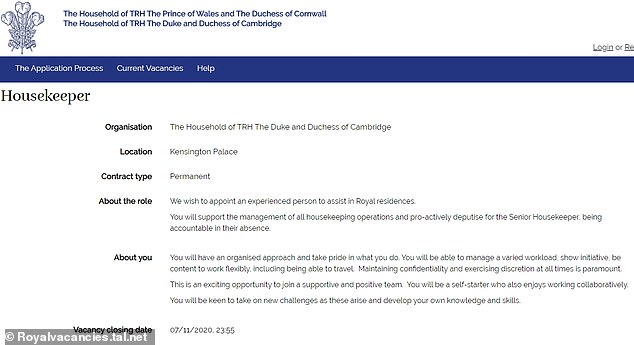 Could you apply? The advert posted on the royal vacancies website by the couple’s team

While primarily based in Kensington, the successful applicant may also be expected to travel with the family when necessary.

The listing on the Royal vacancies website does not state how much applicants would earn if they were to get the coveted job but does say they will need to ‘be able to manage a varied workload, show initiative and be content to work flexibly’.

Those keen to apply for the job must be able to showcase their previous experience in similar roles and be willing to act proactively – even taking on the roles of the Senior Housekeeper in their absence.

The advert reads: ‘This is an exciting opportunity to join a supportive and positive team. You will be a self-starter who also enjoys working collaboratively.

‘You will be keen to take on new challenges as these arise and develop your own knowledge and skills.’ 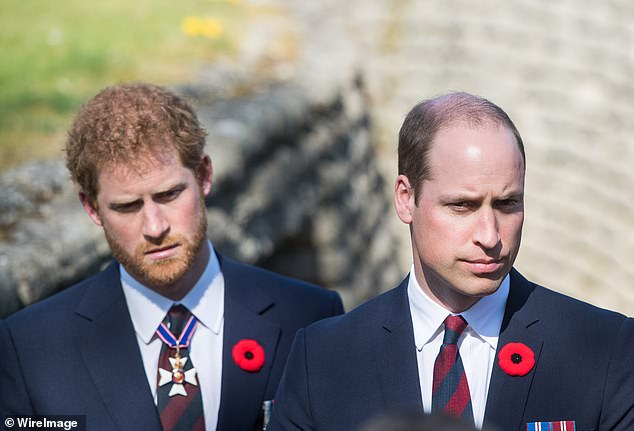 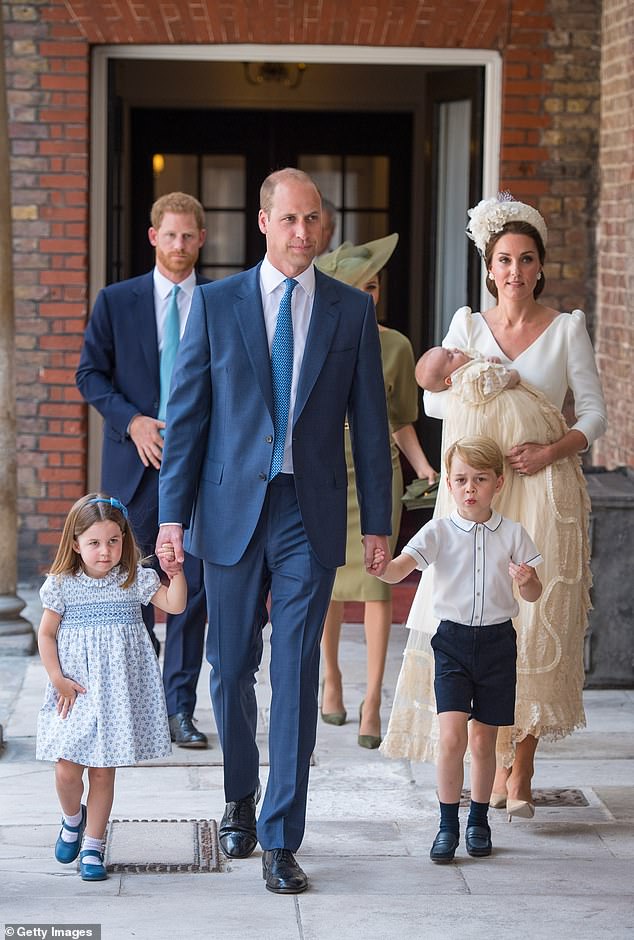 Those interested in applying must ‘be able to manage a varied workload, show initiative and be content to work flexibly’ and a salary is not listed with the job advert. Pictured: Princess Charlotte and Prince George hold the hands of their father, Prince William, Duke of Cambridge, at the christening of their brother, Prince Louis, who is being carried by their mother, Catherine, Duchess of Cambridge 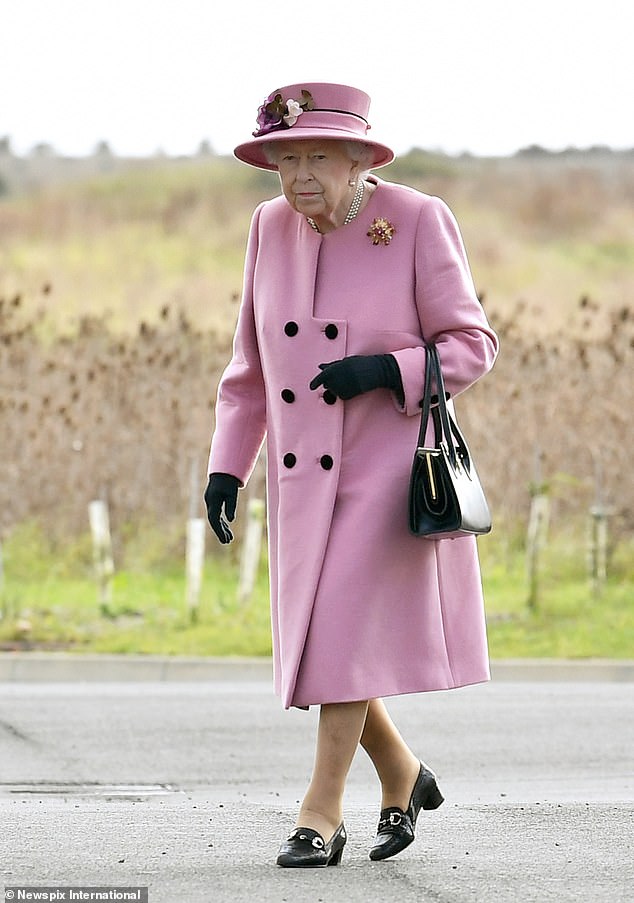 The Queen, 94,  is hiring a cleaner to join its Windsor Palace staff, a new advert on the Buckingham Palace website shows

People hoping to bag the job must complete an application on The Royal Household careers website by November 7.

The latest posting follows another job announcement earlier this week for an apprentice cleaner for Queen at Windsor Castle.

The successful applicant, who will start with a salary of £19,140 and will live at the royal residence, is responsible for the ‘upkeep and care of a wide range of interiors and items’, as well as supporting events and functions at the palace.

Those interested in applying don’t need experience, or an English or Maths qualification, but the candidate will have to be looking for a ‘commitment to learning new skills’ and a ‘willingness to tackle new challenges’.

The Level 2 Housekeeping Apprenticeship will see the candidate learn on the job, supported by a mentor and a 13-month learning programme, before joining the permanent team to deliver ‘exceptional standards’. 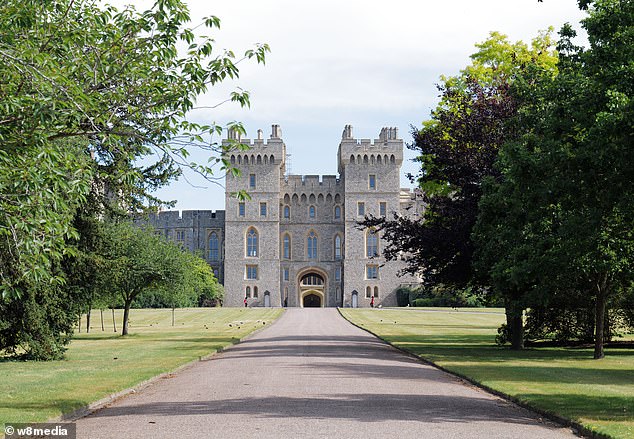 According to the job advert, candidates will be based mainly in either Windsor Castle or Buckingham Palace but will also ‘work across other residences throughout the year’ (pictured, Windsor Castle) 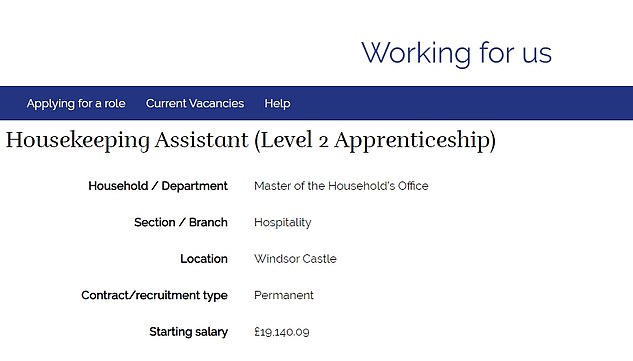 The job advert, which was shared online this week, is based at Windsor Castle with a salary of £19,140

According to the job advert, candidates will be based mainly in either Windsor Castle or Buckingham Palace but will also ‘work across other residences throughout the year.’

The housekeeper will also get to travel to other royal homes for around three months of the year.

Candidates will also be offered the chance to live-in the palace, with all meals and travel expenses provided, for which there is a salary adjustment.

I Dated My Camp Boyfriend For 3 Summers. Years Later, His Sister Found Me — And We Fell In Love.

There’s a strongman holding NATO hostage. And it’s not Putin.

Ohio State up to No. 3 in Amway Coaches Poll behind Clemson, Alabama

Video duration 04 minutes 00 seconds 04:00The Bosnians celebrate in late June of each year the "Ayaz Dada" cultural festival, which is associated with their conversion to Islam....

I Dated My Camp Boyfriend For 3 Summers. Years Later, His Sister Found Me — And We Fell In Love.

I joined Facebook in 2008 with curiosity, searching and scrolling through names of the past to see what had become of friends I once knew, discover who peaked...

There’s a strongman holding NATO hostage. And it’s not Putin.

“Turkey maintains that the admission of Sweden and Finland entails risks for its own security and the organisation’s future,” Erdogan wrote recently in an Economist opinion piece trashing...

Joseph Fucheck, a white Miami gentleman who pointed a gun at a Black home-owner and hurled a racial slur, has pleaded responsible, approved probation and will have to...

GPs have voted in favour of industrial action over a NHS contract that would force them to offer appointments on Saturdays and up until 8pm on weekdays.Members of the...

Ohio State up to No. 3 in Amway Coaches Poll behind Clemson, Alabama