Princess Diana’s breathtaking wedding dress has gone on display at Kensington Palace ahead of a new royal fashion exhibition.

Royal Style in the Making, which opens tomorrow, will feature never-before-seen items from the archives of some of the most celebrated royal couturiers, set alongside examples of the stylish ensembles created for Princess Diana, the Queen and the Queen Mother.

The displays will include original sketches, fabric swatches and handwritten notes used by designers including David Emanuel, David Sassoon and Norman Hartnell when creating one-of-a-kind pieces for their royal clients.

Photographs released today show Diana’s David Emmanuel dress – complete with its spectacular sequin encrusted train, which at 25 feet dramatically filled the aisle of St Paul’s Cathedral – in all its glory in a glass case at the centre of the exhibition. 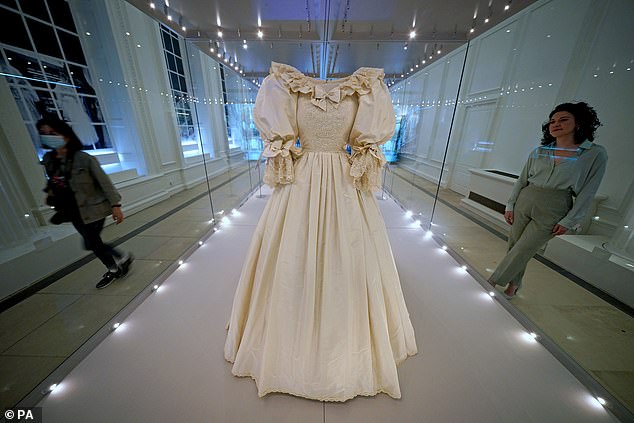 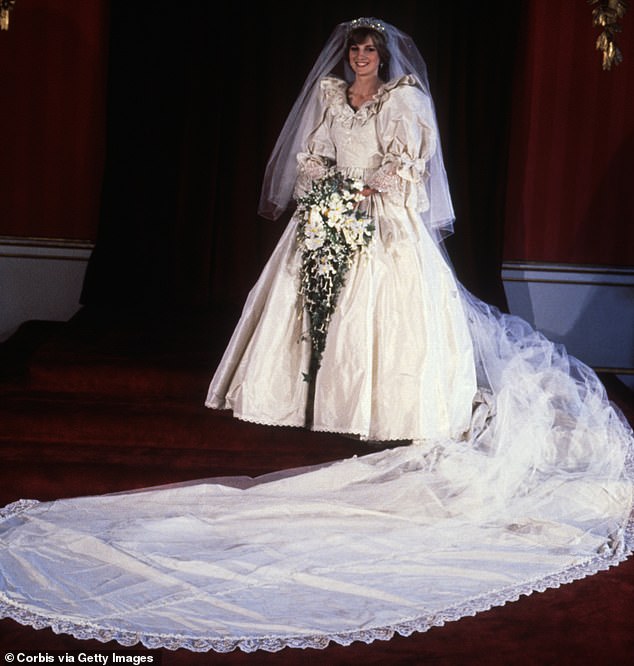 Royal bride: The dress is going on display complete with its spectacular sequin encrusted train, which at 25 feet dramatically filled the aisle of St Paul’s Cathedral

The gown is on loan from Prince William and Prince Harry.

The exhibition also tracks the development of Diana’s style from her peach ‘going away’ honeymoon outfit to the sleek evening gowns she wore more than a decade later.

As part of this, sketches made by fashion designers crafting Diana’s looks will go on display.

Matthew Storey, exhibition curator at Historic Royal Palaces, said his favourite fashion sketch on display is for a blue floral dress designed by David Sassoon in 1988.

‘The dress became known as her “caring dress” because she often wore it on visits to hospitals or to meet children, knowing that they loved the bright, colourful pattern,’ he explained.

‘She decided not to wear the large matching hat that was designed to accompany it, as she said you couldn’t cuddle a child in a hat.

‘She would also sometimes wear chunky jewellery when she knew that she was going to meet children, as they would enjoy playing with it. 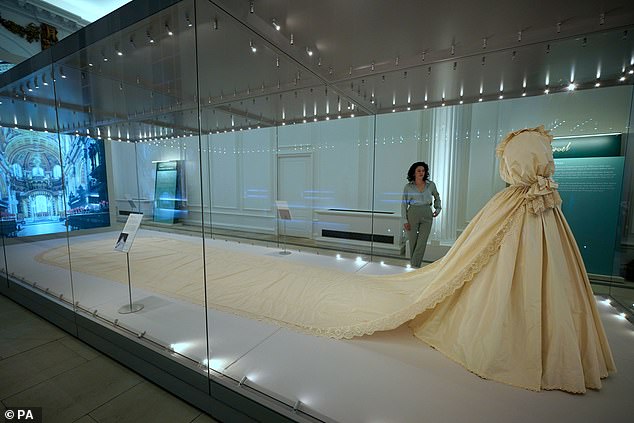 Showstopper: Princess Diana’s wedding dress is one of the highlights of the royal exhibition 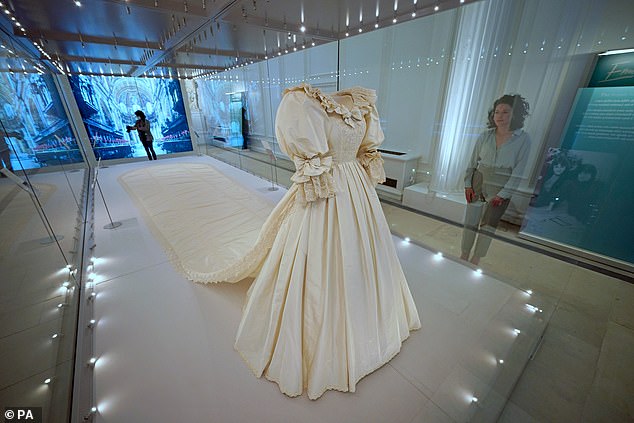 Crowning glory: Royal Style in the Making will feature never-before-seen items from the archives of some of the most celebrated royal couturiers, set alongside examples of the stylish ensembles created for Princess Diana , the Queen and the Queen Mother 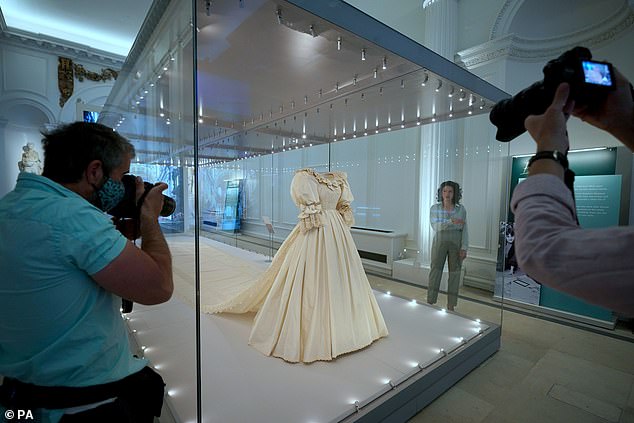 Opening to the public: The wedding gown is put on display ahead of the exhibition opening 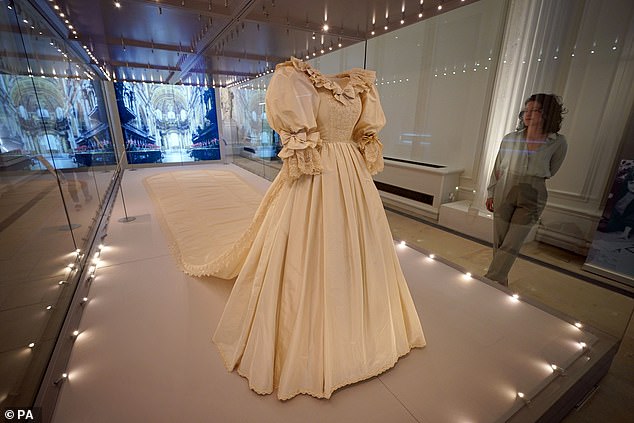 Personal touch: The David Emmanuel dress, pictured, is on loan from William and Harry

‘This really illustrates just how carefully she considered the people she would meet when selecting outfits for her many public engagements.’

The exhibition also takes in pieces created for the Queen and the Queen Mother.

But it is Diana who finds herself firmly back in the spotlight.

Prince Harry has repeatedly discussed his late mother in recent interviews about his mental health and on July 1 he and William are due to unveil a statue of her in the garden of Kensington Palace to mark what would have been her 60th birthday.

Film and TV portrayals including The Crown and Spencer – the upcoming biopic starring Kristen Stewart – have also sparked a renewed interest in the princess’s fashion. 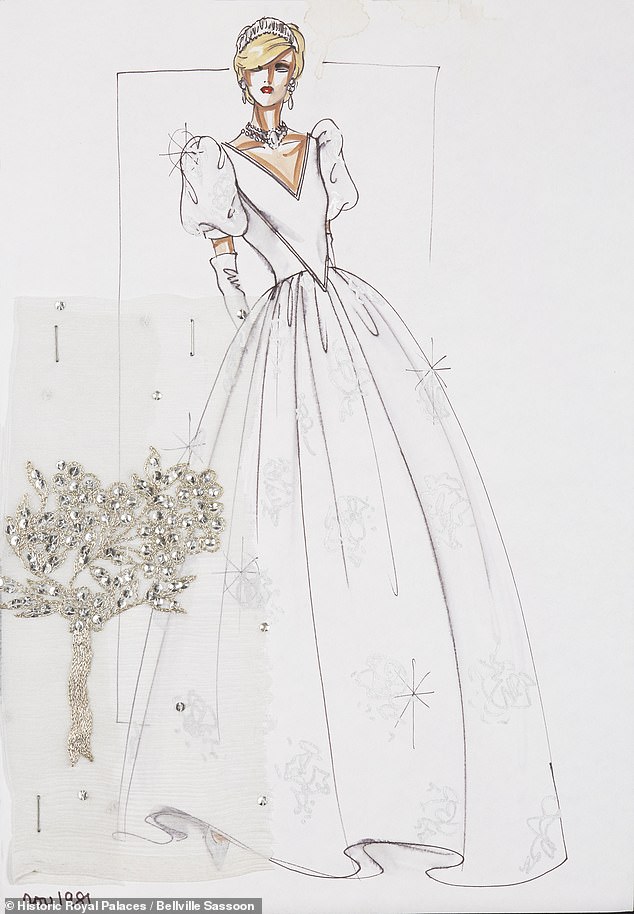 Showstopper: A gown designed by David Sassoon for the State Opening of Parliament. The sketch is one of a number that will go on display as part of the royal fashion exhibition 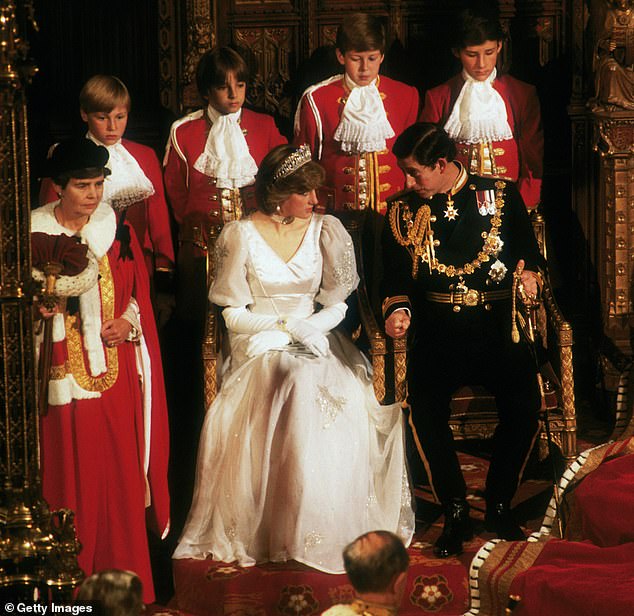 Dazzling: Princess Diana at their first State Opening of Parliament in November 1981

Mr Storey added: ‘Our summer exhibition at Kensington Palace will shine a spotlight on some of the greatest talents of British design, whose work has been instrumental in shaping the visual identity of the royal family across the twentieth century.

‘We’ll be exploring how the partnership between each designer and client worked, and revealing the process behind the creation of a number of the most important couture commissions in royal history.

‘While one of the highlights will undoubtedly be Diana, Princess of Wales’s showstopping Emanuel designed wedding dress, – which goes on show at the palace for the first time in 25 years – we’ve got some real surprises up our sleeve for fashion fans!’

From sketch to dress: Designers’ drawings that will go on display

Anheuser-Busch says it will give away free beer if 70% of U.S. adults get partially vaccinated by July 4

Girl, 17, who pushed a BEAR says it was a split-second decision to save her dogs

The North Macedonian soccer federation has submitted a request to UEFA asking for Austria striker Marko...