The apple hasn’t fallen far from the fashion tree in the Swedish royal family, with Princess Estelle looking a veritable ‘mini-me’ of her mother Crown Princess Victoria, 43, during a public appearance in Stockholm today.

The young royal, eight, donned a camel coat just like her mother’s as they joined King Carl Gustaf of Sweden, 74, to stroll over the new Golden Bridge in Slussbron, Stockholm.

After cutting through a yellow ribbon, the family – appearing to social distance – walked through an arch of fireworks as they stepped foot first on the new bridge, with a small army of Swedish schoolchildren waving flags behind them. 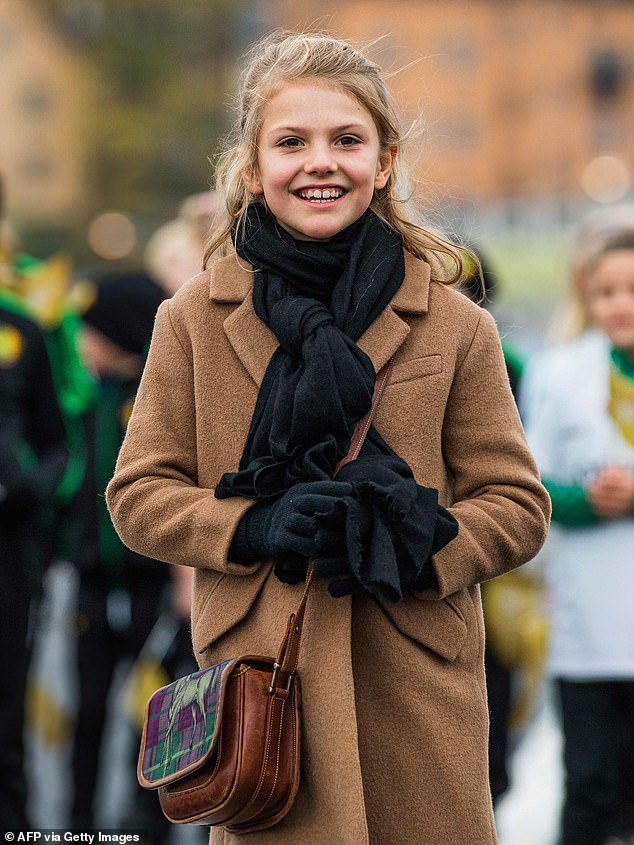 Three generations of the Swedish royal family gathered to open a new bridge in Slussbrun, Stockholm this morning, with Princess Estelle, eight, delighting crowds with her stylish attire which was very similar to that of her mother Crown Princess Victoria’s 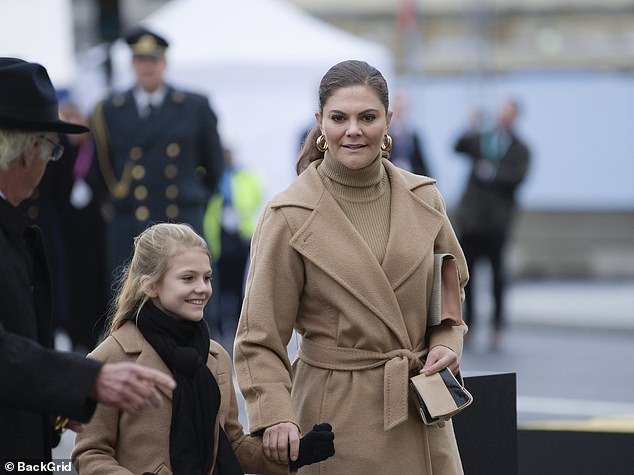 Mini me! Princess Estelle holds her mother’s hand as they stroll out on the new bridge in matching camel coats in Stockholm on Sunday. Crown Princess Victoria wore a Manuela Icon wrap coat, which retails at £1,585 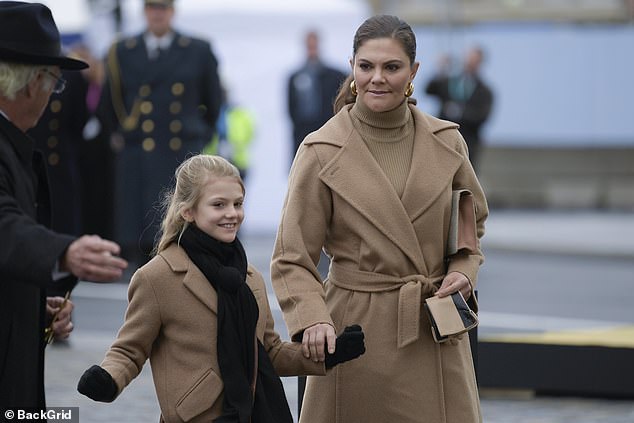 Accessorising with warm-looking black gloves and a scarf, Princess Estelle grinned as she strode across the bridge with her mother, after fireworks were lit to mark the opening of the bridge 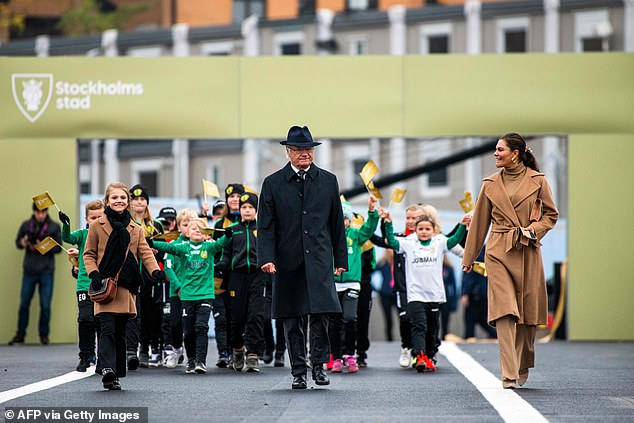 Keeping their distance from King Carl Gustaf of Sweden as they flanked him on the first walk over the new roadbridge, mother and daughter strode forward with confidence

There was no sign of Crown Princess Victoria’s husband, Prince Daniel, or the couple’s youngest child, Prince Oscar, four, during the morning outing.

Smiling for the crowds of well-wishers that had arrived to see three generations of the Swedish royal family open the new bridge, Princess Estelle wore a toasty looking black scarf and mittens to stay warm alongside her camel coat.

On the young royal’s feet, a sturdy pair of studded black Gallucci boots, which retail at around £245.

She matched her coat with a camel roll neck and wide-legged trousers in the same shade. 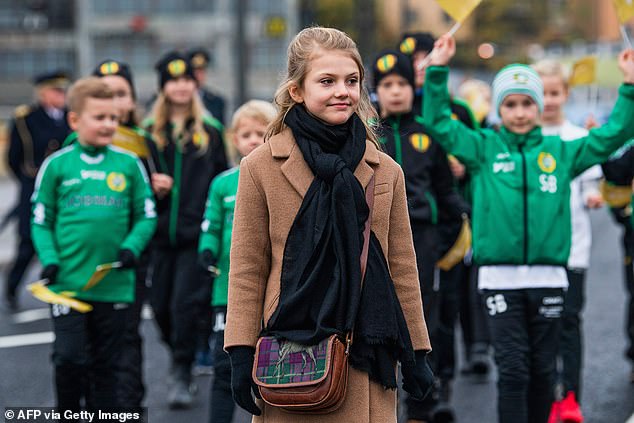 There was no sign of Princess Estelle’s younger brother, Prince Oscar, at the appearance, or her father Prince Daniel 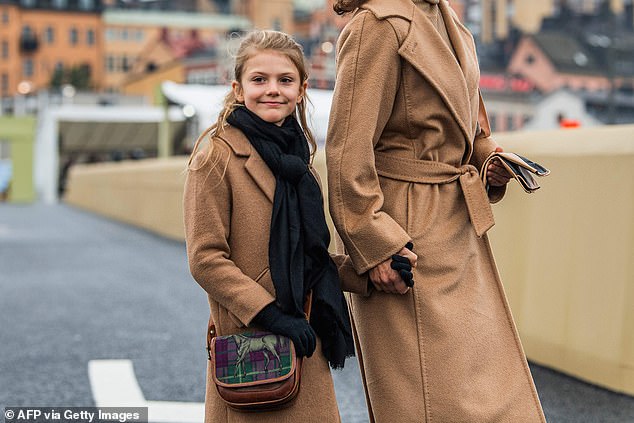 Mother and daughter appeared to carry a similar same bag too – both tan leather clutch bags, with Princess Estelle’s covered in red and green tartan and embellished with a horse 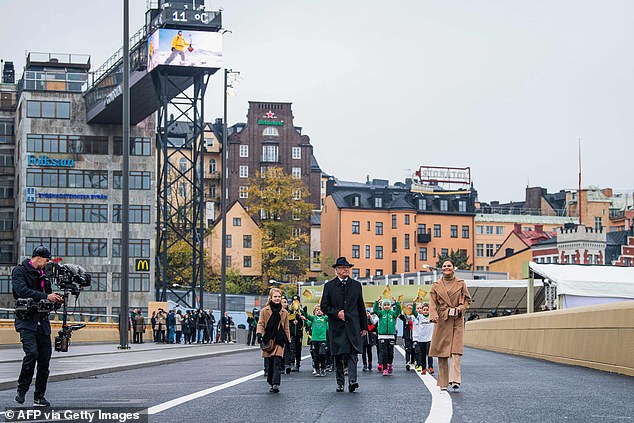 Best foot forward: A legion of Swedish schoolchildren followed the three royals as they cut the ribbon and made it over the road bridge 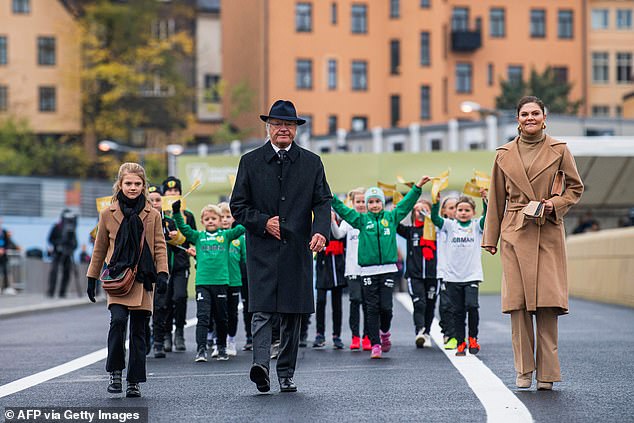 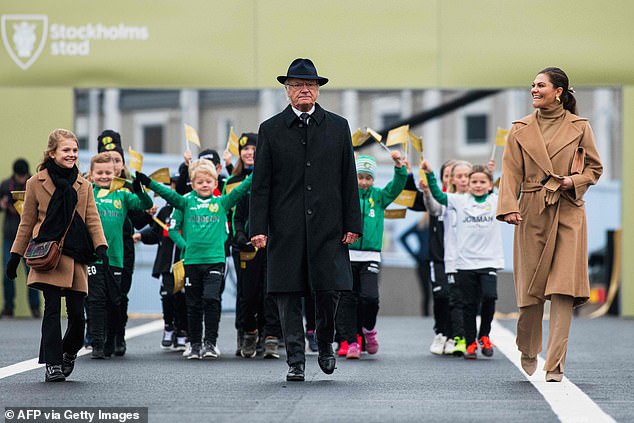 Mother and daughter smile as children wave flags behind them; earlier they’d walked through an arch of fireworks as they first stepped foot on the new bridge

Mother and daughter appeared to carry the same bag too, a tan leather clutch bag with red and green tartan fabric embellished with a horse.

Crown Princess Victoria and Prince Daniel, who used to be her personal trainer, are parents to Princess Estelle and Prince Oscar.

Penn State football's next step: Why the 2020 season is suddenly so questionable