Emad Al Swealmeen lost his first bid to stay in Britain in 2014 but still had an appeal outstanding when he blew himself up on Sunday.

The appeal meant the Home Office was unable to deport him in the intervening seven years.

Pledging to overhaul the asylum system, Home Secretary Miss Patel declared: ‘The case in Liverpool was a complete reflection of how dysfunctional, how broken, the system has been in the past, and why I want to bring changes forward.

‘It’s a complete merry-go-round and it’s been exploited by a whole professional legal services industry which has based itself on rights of appeal, going to the courts day in day out on legal aid at the expense of the taxpayers.’

More than 1,000 migrants are thought to have crossed to Britain in small boats yesterday. Traffickers were seen leading hopefuls carrying dinghies to the water at first light without a French patrol in sight.

Hundreds began arriving on the Kent coast from 8am, with boatloads turning up all day and into the evening. 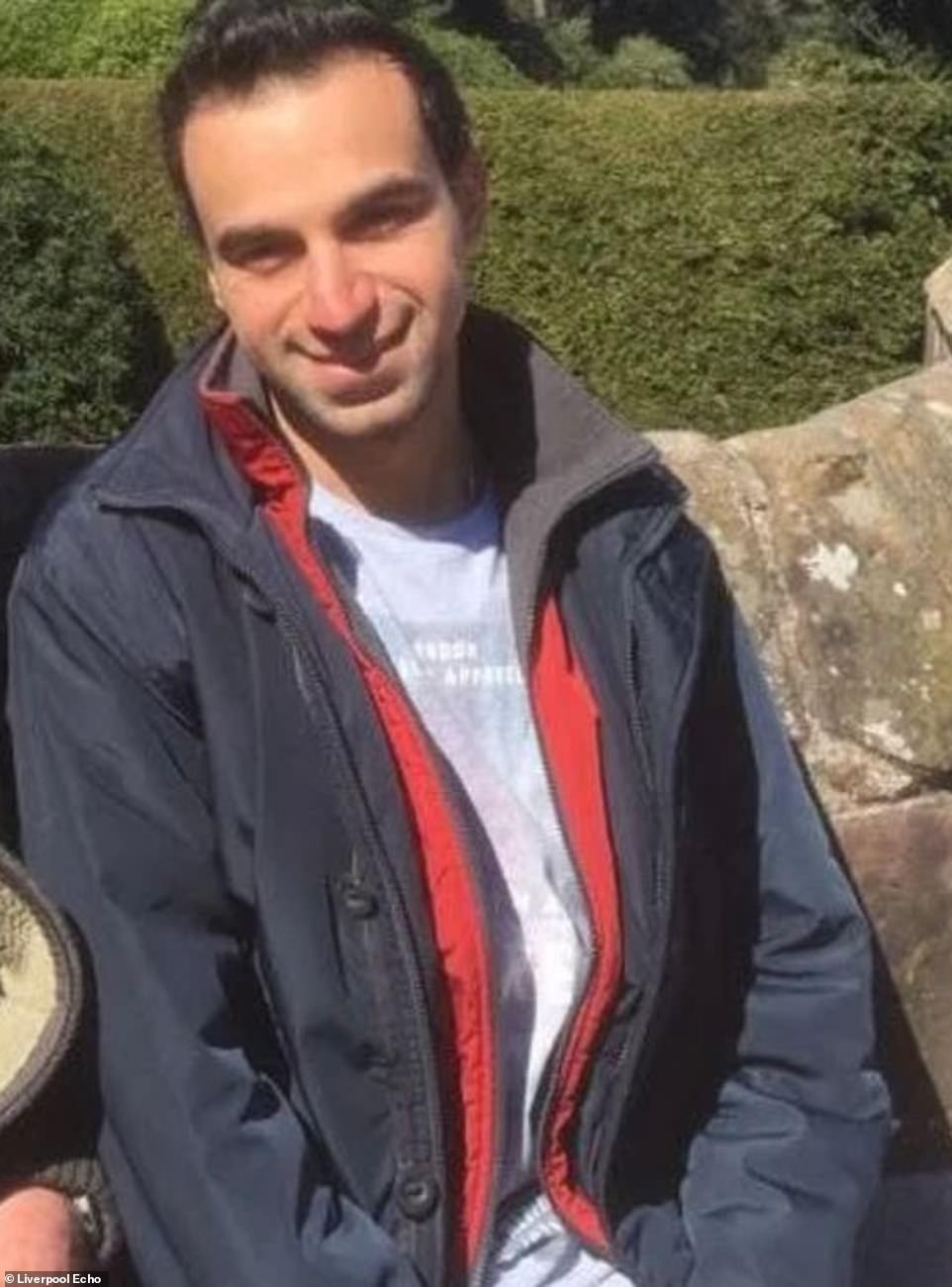 The Liverpool hospital bomber exploited the UK’s asylum ‘merry-go-round’, Priti Patel said last night. Emad Al Swealmeen lost his bid to stay in Britain in 2014 but still had an appeal outstanding when he blew himself up on Sunday 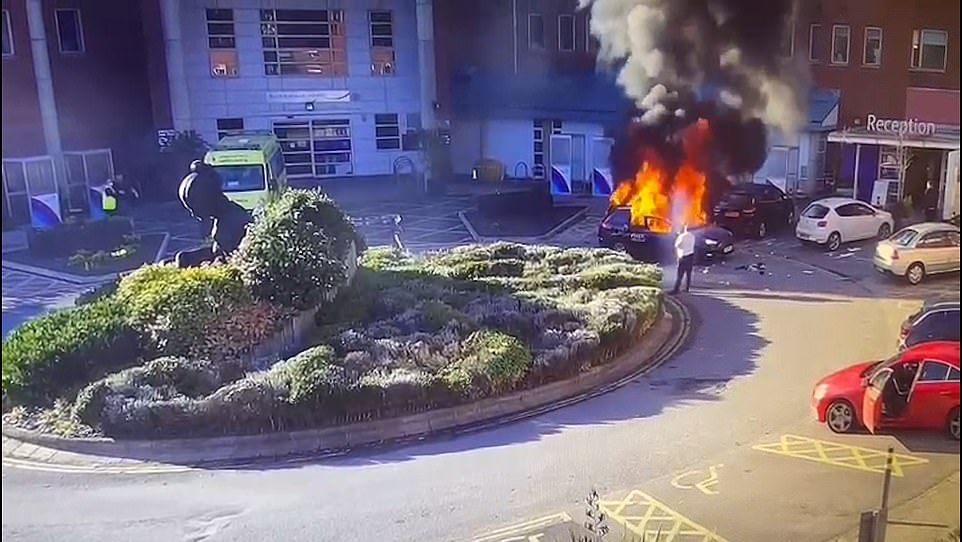 The appeal meant the Home Office was unable to deport him in the intervening seven years. Above: The aftermath of the blast outside Liverpool Women’s Hospital

With investigators yet to find any evidence that the Liverpool Women’s Hospital bomber had terror links:

The revelations about how Al Swealmeen was able to remain in the UK raise serious concerns over flaws in the asylum process that can undermine national security.

A former minister said the case strengthened the Government’s argument for tearing up the Human Rights Act to make it easier to deport failed asylum seekers.

‘This looks like an awful example of what happens when bogus asylum seekers are not sent back and their minds turn to terror,’ said Tory MP Sir John Hayes. 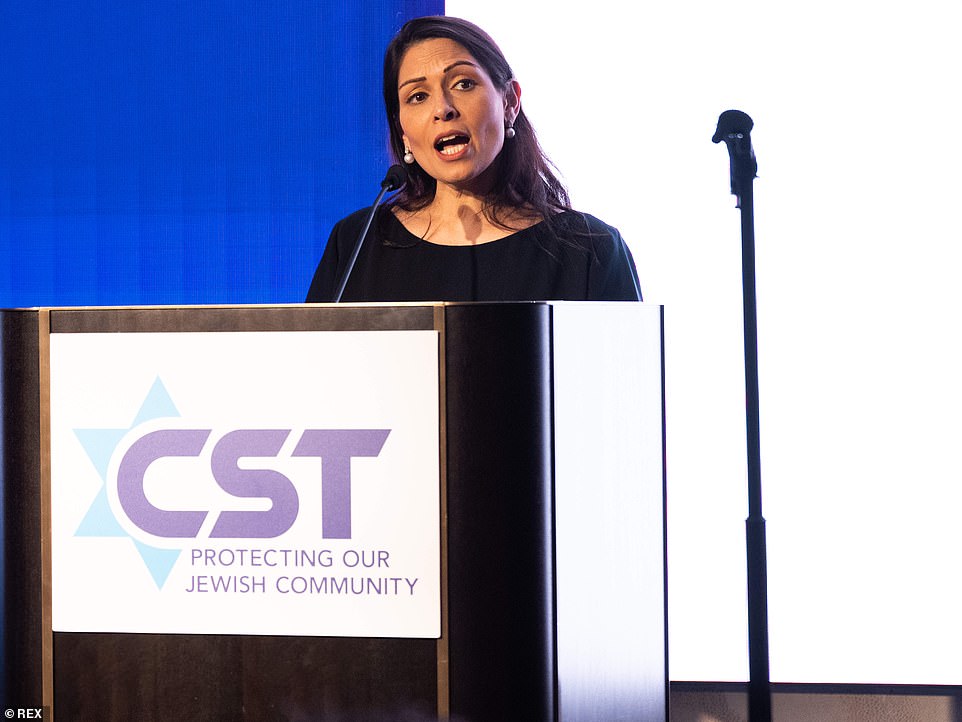 Pledging to overhaul the asylum system, Home Secretary Miss Patel declared: ‘The case in Liverpool was a complete reflection of how dysfunctional, how broken, the system has been in the past, and why I want to bring changes forward

‘Who knows what other horrors we are importing with this broken system?’

Migration Watch UK, which campaigns for tougher border controls, said the case could be the ‘tip of the iceberg’. Alp Mehmet, the group’s chairman, added: ‘It points to the dysfunctional depths into which our shattered asylum system has sunk.

‘Why this person was not removed or detained having been denied asylum is utterly baffling. We need to know.’

David Videcette, a former 7/7 counter-terror detective at Scotland Yard, said it was time for ‘grown-up conversations’ about the potential threat from failed asylum seekers.

‘There are repeated examples across Europe of terrorists infiltrating migrant flows,’ he said. ‘Then, when found out, after exhausting the asylum appeals system, they resort to type and attack their host country at that point. 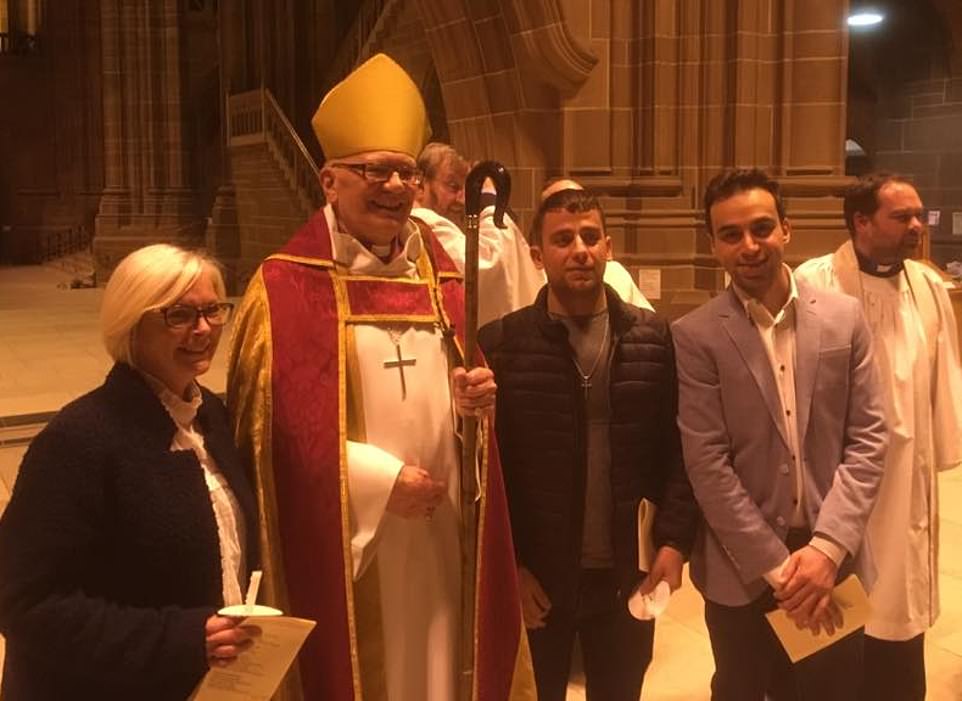 Terrorist Al Swealmeen pictured on the right being converted to Christianity in Liverpool’s Anglican Cathedral in 2017. Sources claim he may have found Jesus just to improve his immigration case 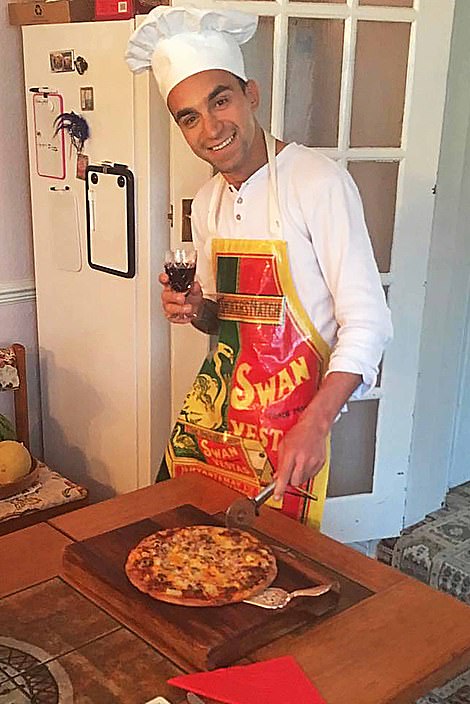 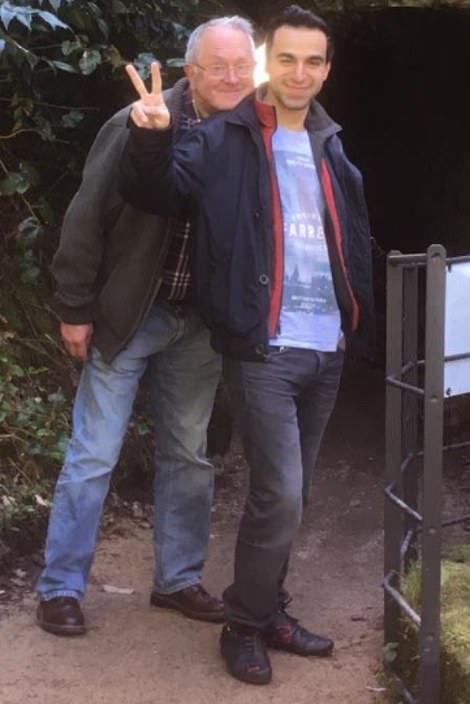 Emad Jamil Al Swealmeen, 32, (left) was killed after a homemade ball-bearing device exploded inside a taxi he rode to Liverpool Women’s Hospital on Remembrance Sunday just seconds before the 11am minute’s silence. He changed his name to Enzo Almeni and was taken in by a British Christian couple left heartbroken by his attack (pictured right with Malcolm Hitchcott)

A couple who took in the suspect in the Liverpool Remembrance Sunday bomb attack believed he was an ‘absolutely genuine’ Christian who had a ‘real passion for Jesus Christ’.

Emad Al Swealmeen, who was a Christian convert, was taken in by Malcolm and Elizabeth Hitchcott in 2017.

Mr Hitchcott said Al Swealmeen first contacted the couple after his asylum appeal was dismissed and was ‘desperate’ for somewhere to stay.

He told BBC Radio Merseyside: ‘He arrived here on April 1, 2017. He was with us then for eight months, and during that time we saw him really blossoming in regards to his Christian faith.

‘He really had a passion about Jesus that I wish many Christians had, and he was ready to learn.

‘He was keen on reading his Bible and every night we used to pray – my wife and him, and if there was anybody else in the house – we prayed for half an hour or so and studied the scriptures. We had a great time together.’

Mr Hitchcott added: ‘He was absolutely genuine, as far as I could tell. When you live with somebody in a small terraced house… you learn an awful lot about people and how their habits are, how they relate to one another, the things they think about, it’s a good assessing ground.

‘I was in no doubt by the time that he left us at the end of that eight months that he was a Christian.’

The 32-year-old died in the blast in a taxi outside Liverpool Women’s Hospital shortly before 11am on Remembrance Sunday.

‘There has to be a better system for dealing with thousands of unknown people, with no documents, claiming they are someone or something they are not.’

Al Swealmeen is understood to have moved legally to the UK in 2014 from Dubai, where he spent his teenage years after allegedly being abused by his Syrian father.

Later that year his initial asylum application was turned down. It is understood his claim was ‘not compliant’ with Home Office rules.

But he lodged a succession of appeals against the ministry’s decisions to deny him refugee status.

In 2015 he was baptised as a Christian at Liverpool’s Anglican cathedral, one of around 200 asylum seekers to adopt the faith there over a four-year period.

Counter-terror police are now treating the cathedral as a potential target.

It was hosting a Remembrance Day service when Al Swealmeen’s bomb partially detonated a mile away in a minicab outside the maternity hospital.

His legal challenges were still under way when he died in the failed bomb attack. It is understood Al Swealmeen’s adoption of Christianity did not play a role in his asylum claims.

But conversions are ‘standard practice’ among some asylum seekers, in particular those from Iran and Iraq, who seek to ‘game the system’ to avoid removal from the UK, sources said.

Al Swealmeen, who changed his name to Enzo Almeni after becoming a Christian, made a fresh asylum application in 2017 but this was rejected two years later.

Forensic officers yesterday continued the delicate task of searching the ‘bomb factory’ in Rutland Avenue, Liverpool, which Al Swealmeen rented in apparent preparation for the attack.

Miss Patel has pledged the biggest shake-up of immigration laws in a generation. Her plans include strict limits on the types of asylum appeals that applicants can use. 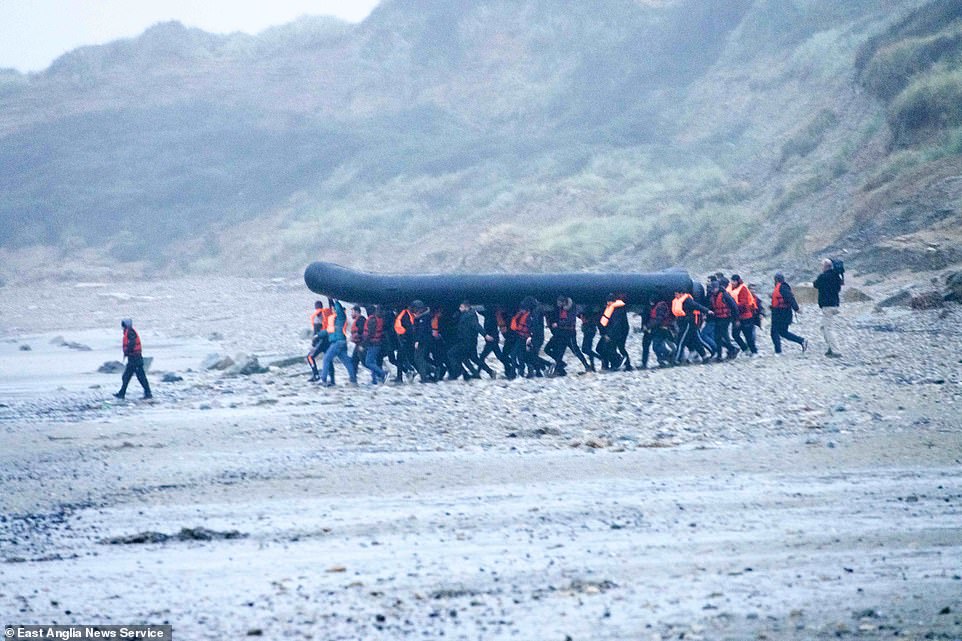 More than 1,000 migrants are thought to have crossed to Britain in small boats yesterday. Traffickers were seen leading hopefuls carrying dinghies to the water at first light without a French patrol in sight

10.57am: The taxi pulls up at the Liverpool Women’s Hospital and explodes seconds later.

10.59am: The vehicle is fully engulfed just before the national silence for Remembrance Sunday.

The passenger was killed and the driver was left with serious injuries. The latter is said to have spotted the explosives, ‘jumped’ from the car and locked the other man inside.

At the time, a remembrance service involving scores of military personnel, veterans and civic dignitaries, was taking place at Liverpool’s Anglican Cathedral less than a mile away. There are reports the taxi parked at the hospital because it could not get any closer to the Cathedral.

11.04am: Police and emergency services arrive at the scene, and it is initially thought the car might have caught alight because of a fuel leak.

1pm: Officers, who are believed to have spoken to hero taxi driver David Perry, announce the incident is being treated as an act of terrorism.

4.54pm: Police seal off Rutland Avenue (right). Around a mile from the blast. Locals said armed police ordered residents to leave and head to a nearby leisure centre, saying the area ‘wasn’t safe’ and were ‘pointing guns at a house’. Counter-terror negotiators were also called to the scene.

3.30am: The operation at the Rutland Avenue address appears to wind down.

10am: Footage of the explosion emerges on CCTV from the scene.

Midday: Police confirm it is being treated as a terror attack. And a man, 20, becomes the fourth suspect arrested

3pm: After raising the UK terror threat level to ‘severe’, speaking at a press conference at Downing Street, the Prime Minister said the blast was a ‘stark reminder’ to the public to remain vigilant, adding: ‘What yesterday showed above all is that the British people will never be cowed by terrorism, we will never give in to those who seek to divide us with senseless acts of violence.

‘And our freedoms and our way of life will always prevail.’

7pm: MailOnline names the suicide bomber as asylum seeker  Enzo Almeni, 32, a Muslim who converted to Christianity four years ago. He changed his name from Emad Jamil Al Swealmeen.

7am: Four suspects who are said to have known Almeni a and were arrested in armed raids were released without charge