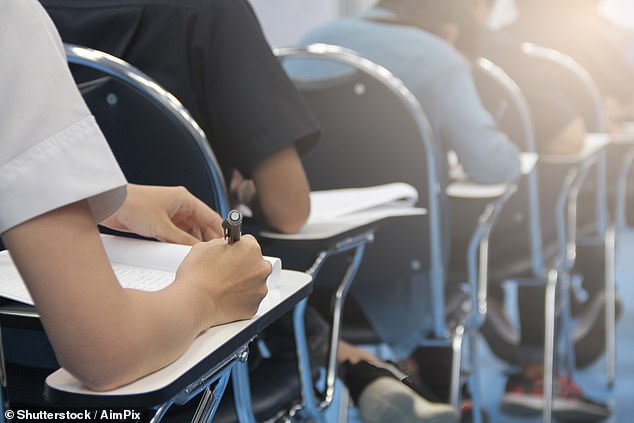 By Connor Stringer For The Daily Mail and Eleanor Harding

Private schools have boosted the value of bursary places for disadvantaged pupils by 30 per cent in a decade, figures released yesterday show.

The real-terms rise, adjusted for inflation, comes amid a row over Labour’s plan to add VAT to fees, putting 200 schools at risk of closure.

Labour wants to remove the charitable status of private schools, which would also axe their tax breaks, arguing they do not do enough to warrant it.

But latest figures released by the Independent Schools Council (ISC), which represents 1,300 schools, shows they are giving away £480million this year in means-tested help with fees.

Private schools have boosted the value of bursary places for disadvantaged pupils by 30 per cent in a decade, figures released yesterday show. [File image]

During the same period of ten years, the number of pupils receiving means-tested fee assistance rose by 18 per cent from 39,545 to 46,517.

Julie Robinson, ISC chief executive, said: ‘These statistics clearly show Labour’s claims are not based in fact. Charitable investment – whether it is bursaries, donations or partnership work with state schools – is at the heart of the independent system.

‘Labour’s ideological tax on aspiration will only imperil the progress schools have made.’

Overall, the number of pupils getting fee assistance, including those who were not means-tested, rose from 140,517 to 157,888 in the last ten years.

The real-terms rise, adjusted for inflation, comes amid a row over Labour’s plan to add VAT to fees, putting 200 schools at risk of closure. [File image]

The overall funding for this increased from £596million to £964million. The rise in value has been driven almost entirely by the means-tested element, meaning more money for poorer pupils.

As a proportion of those receiving means-tested bursaries and scholarships, this represented 28 per cent of pupils in 2022 compared to 25 per cent in 2012.

The data came as Labour yesterday called for private schools to be investigated by the competition watchdog over fee rises.

Education spokesman Bridget Phillipson said costs have risen faster than wages, which could be the result of market failure needing intervention from the Competition and Markets Authority.

In response, Mrs Robinson said: ‘Means-tested bursaries have outpaced fee rises, having increased by 30 per cent over the past decade.

‘This progress on increasing affordability for more families would only be damaged by Labour’s policy, forcing many striving, hard-working parents out of the sector.’

I’m a Bikini Barista. I Make Wonderful Strategies but Retain Tasers Nearby

I'm a Bikini Barista. I Make Wonderful Strategies but Retain Tasers Nearby