An Australian woman has revealed how to fold ‘hotel-worthy’ towels at home in minutes.

The woman made a short video for her ‘effectivespaces’ TikTok followers showing step-by-step how to create a tidy towel set, complete with a bath towel, hand towel and face cloth.

She starts by folding the bath  towel by spreading it on her bed and folding one edge to the middle, length ways. 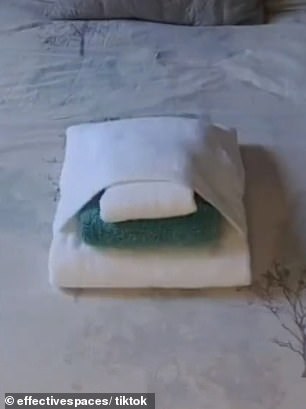 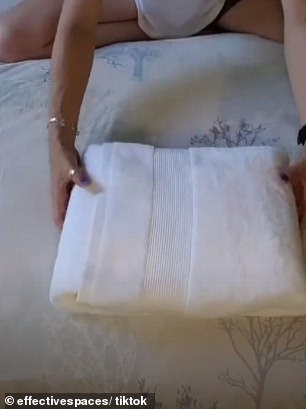 She then folds the other side over it so the towel resembles a nice, neat strip.

She then folds each end to the centre before opening one of the  sides and stuffing the other in, like an envelope.

She sets the towel aside and repeats, this time with the smaller towel and again with the face-cloth.

She then tucks the towels in the opening of the largest towel, ready to be displayed on her guest’s bed or in the bathroom.

‘Such a neat idea, very cute. I am going to steal this,’ one woman said.

‘What a great way to welcome guests,’ one woman said.

‘The things I learn on TikTok, this is amazing,’ thanks,’ one said.

Others simply thanked her for the tips. 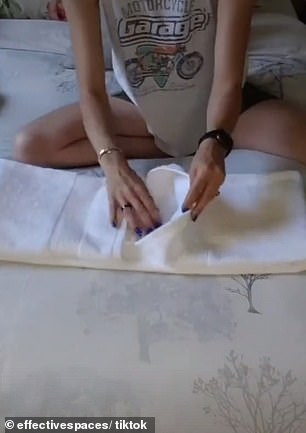 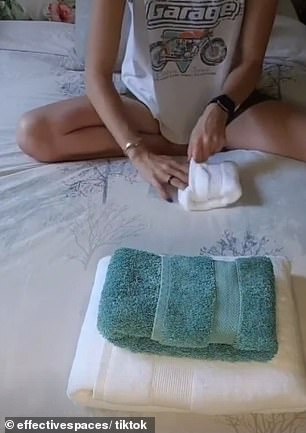 The woman in the video owns an organisation business, and said she came up with the towel-folding hack after trial and error

Others complained the hack looks good at first but is flawed.

‘I fold mine like that but they never stay tucked, they come loose at the side,’ said a concerned housekeeper.

‘Cute! But ain’t nobody got time for that,’ one woman said.

The woman in the video owns an organisation business, and said she came up with the towel-folding hack after trial and error. Adding that she works with different spaces and requirements every day.

Deep clean your mattress within an hour

Spray water on your sheets to save time on ironing

Spray plain tap water from a spray bottle when you tuck your sheets to remove the wrinkles without ironing. Focus on the areas with the most wrinkles and pull the sheets taut when you’re spraying the water.

Opt for lighter linen, clothes and cushions to make your room feel cosy and bright. Light colours make a room seem more spacious and modern, unlike dark colours which can close the room and make it seem smaller and old-fashioned.

But some people were not sure the hack would work for everyone.

‘Then you have children and they sit in the dryer or clean laundry basket,’ one woman said.

‘More power to you, mine are lucky to get folded and in the drawer,’ said another.

Another admitted she ‘lives for organisational TikTok videos’.

And she wasn’t the only one.

‘There is something soothing about watching this,’ one person said.

Others asked for a similar tutorial for sheet sets.

Hackers penetrate 150,000 surveillance cameras in a number of countries and seize their data