A pub landlord who claimed a chilli eating contest was exempt from lockdown rules because its an ‘elite sport’ has been hit with a prohibition notice.

Craig Harker, 33, landlord of The George Pub and Grill in Stockton-on-Tees, County Durham, has been served with a prohibition notice following the British Eating League event in the earlier this month.

The socially distanced eating tournament was attended by a TV crew and five ‘athletes’ taking on the hottest chillies in the world.

The event was held in conjunction with the British Eating League but a complaint was lodged to Stockton Council after concerns it was in breach of lockdown rules. 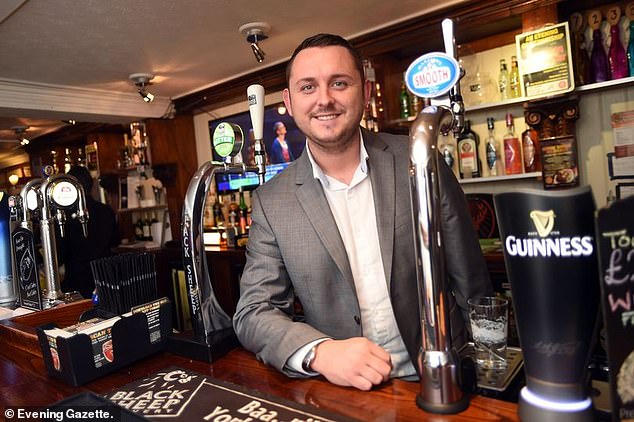 Pub landlord Craig Harker (pictured), 33, has been hit with a prohibition notice over a chilli eating contest that was held at The George Pub and Grill in Stockton-on-Tees, County Durham, on November 7

However Mr Harker, who runs the pub, said he adhered to the guidelines as he classes competitive eating as an elite sport.

He hit back at those that complained and insists no rules were broken.

Government guidelines for lockdown state that restaurants and pubs must close but venues are permitted to be open for a small number of exempt activities –  including for elite sportsmen and women to train and compete.

Mr Harker didn’t sell any food or drink during the competition so therefore didn’t break any lockdown rules stating that pubs and restaurants aren’t allowed to sell products.

Earlier this month, Stockton Council made inquiries into the event and concluded that no further action would be taken against the pub.

But this week, the council made U-turn on their earlier decision and the pub was served with a prohibition notice in relation to the November 7 event. 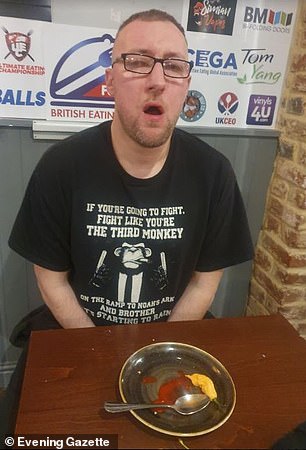 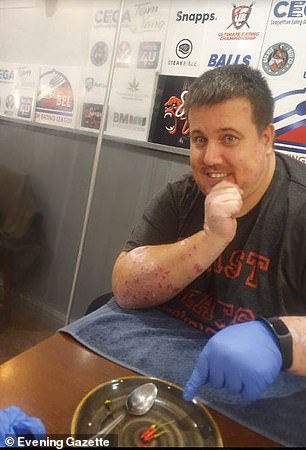 The event was in conjunction with the British Eating League but a complaint was lodged to Stockton Council after concerns it was in breach of lockdown rules. Pictured: Two of the five ‘athletes’ who took on the hottest chillies in the world

It claims there were ‘reasonable grounds for believing’ Mr Harker is ‘contravening a requirement in the regulations and that it is necessary and proportionate to issue a prohibition notice to prevent continued contravention of that requirement.’

It means the pub can no longer serve food and drink on the premises.

Pub landlord Mr Harker has hit back at the council’s decision and said he will be appealing the notice.

Mr Harker said: ‘Of course, I’ll be appealing the decision and fighting the case that competitive eating is a sport and an elite level as well.

‘It’s lockdown 2 and people are looking online for entertainment, the British Eating League provides that under a safe environment whilst sticking to Government guidelines.

‘I won’t turn and hide and be told how I can and can’t run my business.

‘We are a successful restaurant and take-away looking to expand across Teesside and then the rest of the UK, if anything the council is pushing us away from the area and our customers. 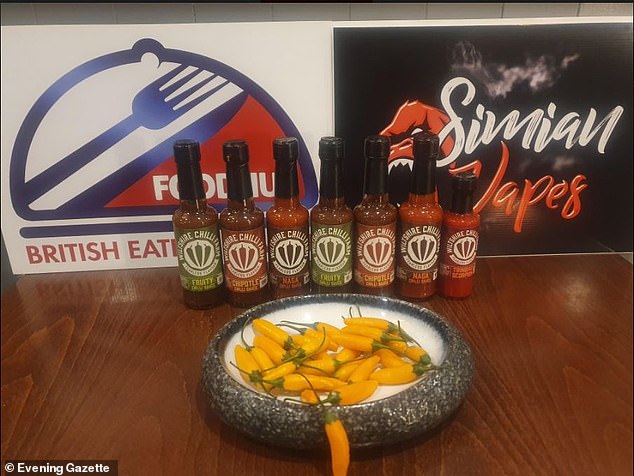 Pub landlord Mr Harker insists no rules were broken because competitive eating is an ‘elite sport’ and said he will be appealing the notice. Pictured: Chillies eaten in the competition

‘They should be praising us and begging us to stay in the town rather than fight us at every opportunity.’

Councillor Bob Cook, Leader of Stockton-on-Tees Borough Council, told TeessideLive: ‘Mr Harker held a competitive eating event in his venue which we believe to be a breach of national restrictions.

‘We have therefore served him with a Prohibition Notice.’

Prohibition notices can be served under new legislation introduced in March in response to the rising number of coronavirus cases.

Local authorities and police have the power to close premises that are failing to observe the lockdown.

Under the new legislation, if a person fails to comply with a prohibition notice, they commit an offence.

Cyberpunk 2077 Appears to Be in the Wild, So Beware of Spoilers