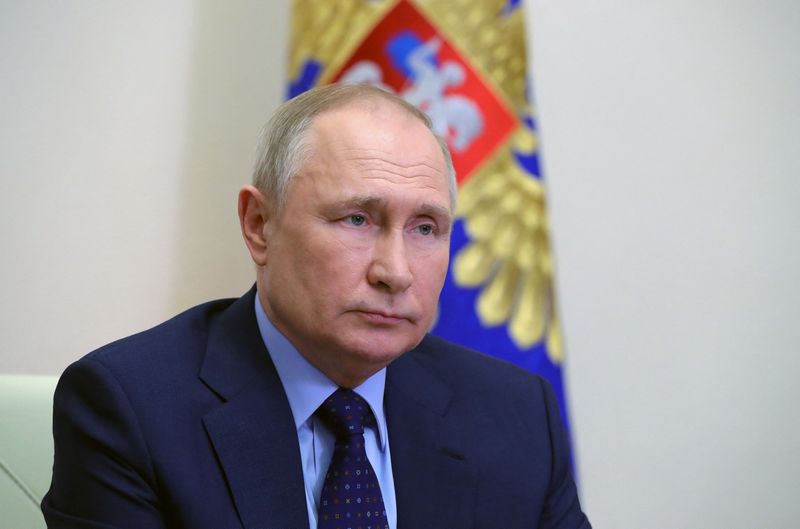 ©Reuters. FILE PHOTO: Russian President Vladimir Putin speaks during a meeting of his Security Council members at his official residence in Novo-Ogaryovo outside Moscow, Russia on April 7, 2022. Sputnik/Mikhail Klimentyev/Kremlin via R

Speaking at an award ceremony at the Vostochni Cosmodrome in the Russian Far East, Putin said Moscow had no choice but to launch a military operation to protect Russia, Russian news agencies quoted him as saying, the clash with the anti-Russian forces in Ukraine has been inevitable.

“Their goals are absolutely clear and noble,” Putin said of Russia’s military campaign.

Putin said the main goal of Moscow’s military intervention in Ukraine is to save the population of the Donbass region in eastern Ukraine, where Russian-backed separatists have been fighting Ukrainian forces since 2014.

“On the one hand, we are helping and saving people, and on the other, we are simply taking measures to ensure the security of Russia itself,” Putin said. “Clearly we had no choice. It was the right decision.”

Millions of Ukrainians have been forced to flee the country since Russia sent tens of thousands of troops to Ukraine on February 24 in what it has described as a special operation to degrade its southern neighbor’s military capabilities and root out people who described as “dangerous nationalists”.

Ukrainian forces have put up stiff resistance and the West has imposed sweeping sanctions on Russia to force it to withdraw its forces.

In New York, several people hit by gunshots in a subway station

In New York, several people hit by gunshots in a subway station