Quarantine for travellers will be reduced to just FIVE DAYS


Travel quarantine will be reduced to five days from December 15 in a major victory for the Mail’s campaign to Get Britain Flying Again.

Under a new ‘test to release’ scheme, arrivals from high-risk destinations will be able to get a private test after five days in self-isolation.

If they test negative, they will be free to go about their normal lives more than a week earlier than the current 14-day system allows.

Passengers will have to pay for a test from a government-approved private medical firm to avoid putting pressure on NHS resources.

Under a new ‘test to release’ scheme, people flying  from high-risk destinations will be able to get a private test after five days in self-isolation. Pictured: An flight attendant prepares to conduct the safety briefing for passengers while wearing PPE

Tests are expected to initially cost between £65 and £120 per passenger, meaning it could cost a family of four an extra £480 to get tested after their holiday.

However, the cost of post-travel testing is expected to fall substantially as production ramps up next year – potentially to as little as £5.

Travel experts hope the new scheme will trigger a spike in bookings over the busy Christmas period, although the bosses of British Airways and Virgin Atlantic believe even a five-day quarantine will continue to hamper demand.

The new regime will apply to travellers arriving in England from all countries on the Government’s ‘red’ list of countries, from which arrivals must self-isolate for 14 days.

A list of permitted testing providers will be published by the Department for Transport next month.

Last night Transport Secretary Grant Shapps confirmed the list of approved providers will include firms offering rapid tests which produce results in as little as 30 minutes.

In a further boost for the crippled aviation industry, Mr Shapps has promised a new package of financial support capped at £8million per airport. 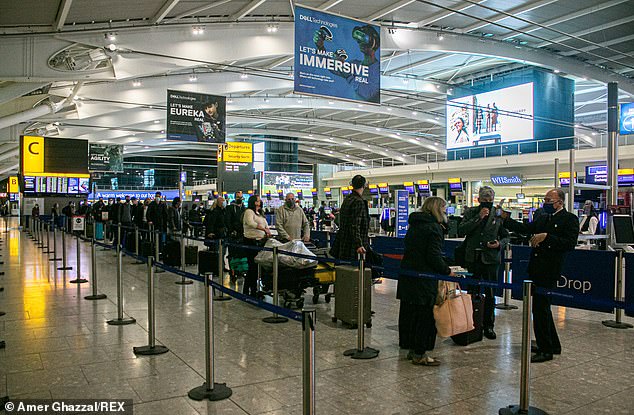 If people test negative, they will be free to go about their normal lives more than a week earlier than the current 14-day system allows. Pictured: Heathrow airport 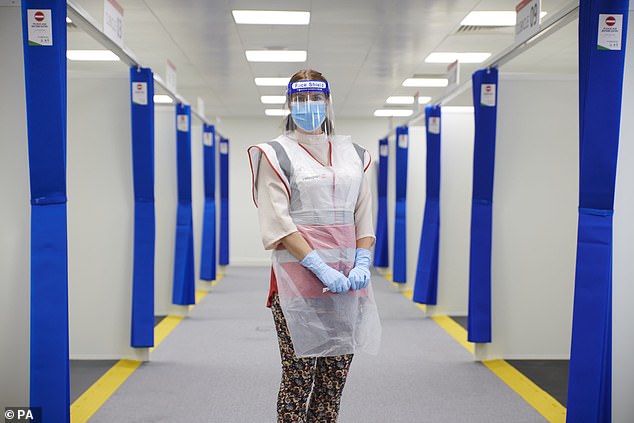 The funding will be released next year, when ministers are also set to approve a plan to kick-start the cruise industry.

This could allow sailing to resume by summer, providing operators agree to take full responsibility for the cost of repatriating passengers and crew if they are stranded as a result of an outbreak.

The changes represent a major victory for the Mail’s campaign – launched in September – to save the travel and aviation industries.

The Government’s Global Travel Taskforce, which launched last month, has been examining options for a shorter quarantine. The timeline was agreed after experts confirmed a test on day five would identify the majority of infections.

Foreign travel is currently banned except for work or emergencies, but that will end for many when the lockdown is eased on December 2.

Travel ban is lifted – just in time for a festive getaway

A ban on international and domestic travel will be lifted next week so holidaymakers can get away before Christmas.

But there is a caveat in that travel will be ‘subject to guidance in each tier’ – and the Government is still advising against travelling where possible.

Hotels and other accommodation providers such as Airbnb will be able to open in Tier One and Tier Two areas.

In Tier Three, they will be closed with some exceptions, such as for workers.

Overnight stays will be allowed in Tier One as long as visitors stay within their household groups, support bubble, or in a group of up to six.

In Tier Two, overnight stays will be allowed within households and support bubbles, but will be banned in Tier Three.

Travel to second homes will be allowed but restricted to the same local area if in Tier Three.

Need to prevent coronavirus from spreading throughout the world dealt a hammer blow to our aviation industry, writes Transport Secretary GRANT SHAPPS

Among the many consequences of the Covid-19 pandemic is the devastating impact on civil aviation.

Deserted airports, idle airliners parked up in their hundreds, thousands of skilled workers on furlough, nothing like this has been experienced in the history of modern mass air travel.

The need to prevent the virus from spreading freely throughout the world has dealt a hammer blow to the UK aviation industry, a sector that in normal years contributes around £14 billion to the economy and directly employs 130,000 people.

Aviation is a British success story, and we must get it back in the air. 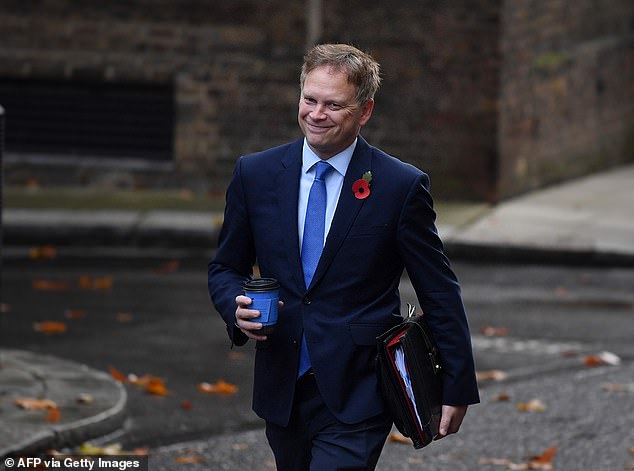 The Test to Release scheme is a brilliant development and one that marks an important step on the road to recovery, writes Grant Shapps

The vaccines now coming down the line offer hope of a solution to the pandemic. But we are going to be living with the virus for months to come, and aviation needs its own shot in the arm now.

So, the Test to Release scheme is a brilliant development, one that, while not solving all our problems, marks an important step on the road to recovery.

The restrictions introduced in the summer mean that, for travellers returning to the UK from most major destinations, a two-week period of self-isolation is currently necessary.

Test to Release, which allows travellers to leave self-isolation if they produce a negative result to a Covid test taken a minimum five days after arrival, is a game changer.

It can slash the quarantine period by up to two-thirds and, because it relies on a single test, is affordable. In addition, as we are insisting on use of the private testing network, it will not burden NHS Test and Trace. Doctors, nurses and teachers – these vital workers must have first call on public resources.

I know how frustrating the wait for traveller testing has been for an industry in crisis. One of the reasons I asked for the Transport job in this government was my own passion for aviation, and it has been painful watching this great sector bleeding cash and jobs.

But the truth is, there was no easy solution to the problem. Throughout the summer, experts warned me that a single test on arrival in the terminal would pick up only a tiny proportion of infected people.

France and Germany tried testing on day of arrival but had to abandon it as imported cases rose. Only self-isolation helped keep the lid on Covid.

Now, we have private testing capacity that allows us to offer Test to Release as a viable option to business travellers and tourists. 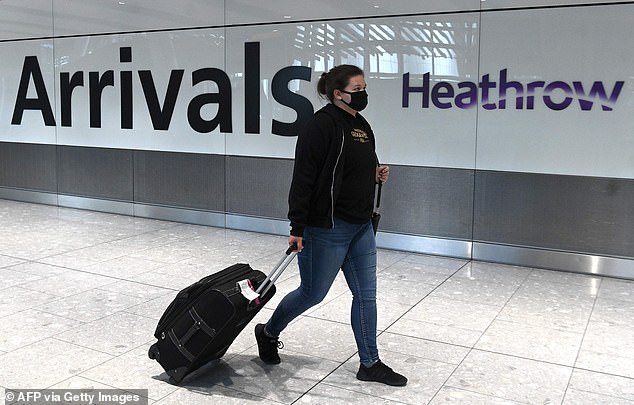 By testing on day five we can pick up the great majority of infections. The shorter self-isolation period means overall the system will be as effective.

Our ability to safely cut so many days from self-isolation is thanks to the government working hand in hand in with the private sector. There are tough months to come for international travel, but airlines and ports can now look to the future with more optimism.

And there is yet more reason for this optimism. We’re offering a new package of financial support for English airports and ground handlers serving them, to shore up jobs and reinforce local economies.

Opening in the New Year, this package will boost our airports as we look forward to a bright future in 2021.

Test to Release will help bridge the gap between the near paralysis affecting aviation in the depths of the pandemic and a gradual return to normality next year.

More of us will be able to take to the skies to visit the people and places we love. Or to do business to help with our nation’s recovery. It is not over yet, but there is a some blue sky opening up.

See It, Feel It, Have It: The Master Key To Manifesting Your Desires

Even vaccinating 100 percent of the population may not be enough to eradicate COVID-19 once 'super-covid'...