Former smokers are seeing their cash go up in flames as they pay over the odds for life and illness insurance. 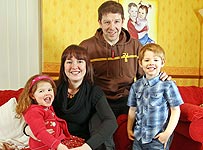 Florida bound: The Williams family plan to visit Disney World thanks to the savings

More than three million ex-smokers are paying an estimated £316m extra for cover each year because they have not told insurers they have quit.

Smokers who stay off cigarettes and nicotine-replacement products for 12 months or more will usually qualify for quotes as a non-smoker. And the potential savings from rearranging cover are significant.

The average smoker pays £209.76 a year for life cover, compared with £113.88 a year for a non-smoker, according to Sainsbury’s Life Insurance.

The company researched a range of quotes across varying ages and different sums insured.

Non-smokers also get cheaper rates for critical illness insurance, which pays a lump sum if you succumb to a specified condition, and for income and for income protection that pays a regular income if you cannot work because of illness.

Andrew Gray, product manager at Sainsbury’s Life, says: ‘The financial gains of giving up smoking are often underestimated. Your life insurance premium could decrease, as you demonstrate that you’ve made efforts towards a healthier lifestyle.’

More than 1.6m people say they have quit smoking in the past 12 months, according to Sainsbury’s research.

Matt Morris, senior policy adviser at specialist protection broker LifeSearch, says: ‘Insurers may be happy to accept your word that you are no longer smoking.

But some may ask for a cotinine test to check for traces of nicotine in your system.’

Lying about whether you are a regular smoker could invalidate a future claim if checks against your medical records show otherwise.

The birth of daughter Erin, now two, helped convince David Williams it was time to give up. David, 45, and his wife, Sian, 30, also have a son, Cai, five.

David says: ‘I had tried to quit a few times before, but there is nothing like having a young family around you to spur you on.’

David, a housing officer, had been smoking 15 cigarettes a day, but stopped on January 1 last year. ‘I built myself up for it. I was a bit irritable in the first few weeks, but I soon got through that and I now feel really good,’ he says.

David, of Llanrwst, Gwynedd, says: ‘The adviser told me that if I ever gave up smoking, I should come back and see if I could get a better deal.’

Earlier this month he switched to a new non-smoker rate, paying £22.45 a month with Aviva.

David says: ‘I am putting some of the money I don’t spend on smoking towards taking the family to Walt Disney World in Orlando. The savings on insurance will help boost that further.’

If you decide to rearrange life insurance, shop around and compare deals. Also reassess your needs and whether the sums insured should rise to take account of your lifestyle.

Women may want to rearrange their cover quickly. Their preferential rates for life and health insurance could soon be banned under European equity law.

Do not cancel any existing cover until the new policy is running and you have seen the first monthly payment leave your bank account.

There may be circumstances when a former smoker is better off sticking with their existing cover, particularly with critical illness plans.

Morris says: ‘Over the years, the definitions of medical conditions covered by insurers in their critical illness policies has tightened up. A long-established policy will often have more generous terms and be more likely to pay out.

‘You should speak to an adviser who can check your policy conditions and help you to weigh up whether a lower monthly premium is a good trade-off against the cover you already have.’

Stub it out: The financial benefits of giving up

The biggest financial gains from quitting smoking come from the savings on buying cigarettes or tobacco.

Put another way, quitting is like giving yourself a pay rise of £188 a month before basic-rate tax and National Insurance. This money could help transform your finances.

Helen Kanolik, who runs HelenK Financial Advice in Wimborne, Dorset, says: ‘One option would be to use some of the money to help pay down debt, starting with your most expensive debt first.’

Those without short-term debts might choose to overpay on a mortgage, reducing interest costs and clearing the outstanding balance earlier.

Alternatively, ex-smokers could use the extra disposable income to kick-start long-term saving. Investing £130 per month for ten years at an investment growth rate of five per cent a year after charges produces a fund worth £20,186. Over 20 years, this fund would be worth £53,434.

Kanolik says: ‘It is important to have some fun with the money as a reward for giving up. Another idea could be to join an investment club and use some of the saving as your monthly subscription to learn about investing.’