Queensland health authorities are scrambling to find the mystery source of a new case of the deadly UK strain of coronavirus which has been found in Brisbane.

A 26-year-old landscaper from Stafford in the city’s north tested positive to Covid on Thursday night, sparking exposure alerts for venues including a busy Westfield shopping centre.

With the man having no link to hotel quarantine, officials are baffled as the how the landscaper caught the B117 variant – better known as the UK strain – with it being linked to a previous cluster announced on March 12 through an unknown person. 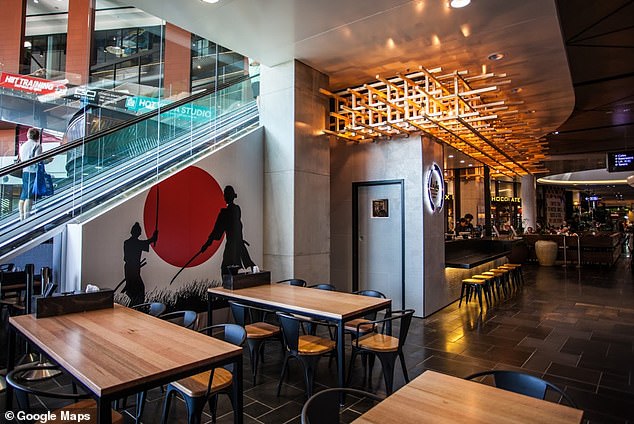 Shinobi Ramen Noodle shop at Westfield shopping centre, Carindale, Brisbane, is one of the new covid hotspots from 12 noon to 2.16pm on March 20

Genomic sequencing has linked the case to the Princess Alexandra hospital cluster which was discovered earlier this month but officials do not know how the landscaper contracted the virus.

Before his positive test the man visited venues across Brisbane over a number of days since last Friday.

Queensland Health updated its advice to urgently call for anyone who was in any part of Westfield Carindale shopping centre from 12 noon to 2.16pm on Saturday, March 20, to immediately isolate and get tested.

Also anyone who went to Mamma’s Italian Restaurant, Redcliffe, on March 21 from 12.40pm to 3.10pm should immediately quarantine for 14 days and get tested.

Hotspots added to the alert list on Friday evening include Shinobi Ramen Noodle Shop and Kmart at Westfield Shopping Centre Carindale on Saturday March 20 from 12 noon to 2.16pm

KFC’s drive-thru at Everton Park has also been added to the list of low-risk venues for anybody there on Monday March 22 for the five minutes from 7.55pm to 8pm.

The Queensland outbreak has prompted Western Australia to hand down a snap quarantine rules for potentially exposed travellers to isolate and get tested. 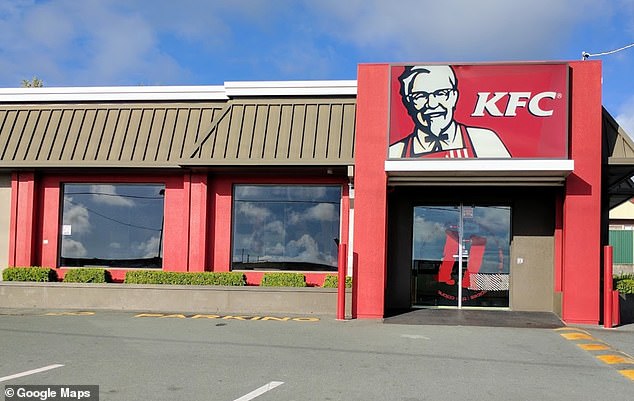 The KFC drive-thru at Everton Park, Brisbane has been put on the hotspot list for only 5 minutes from 7.55pm to 8pm on March 22

The restrictions apply to anyone in Queensland since March 20 who was at the designated hotspots during the alert times.

WA Health Minister Roger Cook said anyone entering WA from Friday who had been at the hotspots would need to quarantine.

The infected man – who has no connection to Queensland’s hotel quarantine program and has not been overseas – has been taken to Royal Brisbane Hospital for treatment. 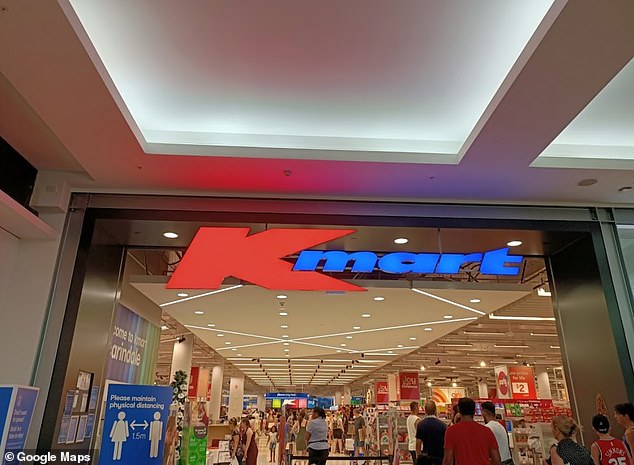 Kmart in Carindale Westfield, Brisbane, has been added to the list of hotspots as WA imposes new restrictions of immediate quarantine for any traveller exposed during the alert times

On Friday afternoon, Queensland’s chief health officer Jeannette Young said it was likely there was an unidentified intermediary who had passed the virus on to the man.

‘We will know more in the next 24 hours, but in the meantime, those identified as visiting the locations in today’s Public Health Alert should immediately get tested and isolate until you receive your results,’ she said.

Dr Young said the Public Health Unit will reach out to close contacts, who will be required to quarantine.

‘The detail from the genomic testing is getting faster and better – we know that the gentleman who tested positive on late Thursday night was highly contagious,’ she said.

‘We therefore cannot afford to be complacent – if you have any Covid symptoms at all, please come forward and get tested.’

The infection prompted Queensland Premier Annastacia Palaszczuk to close aged care facilities, hospitals and prisons to visitors in the Brisbane City and Moreton Bay council areas from 12pm on Friday. 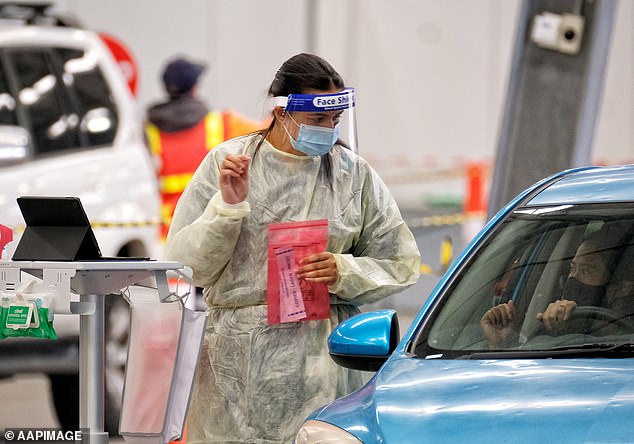 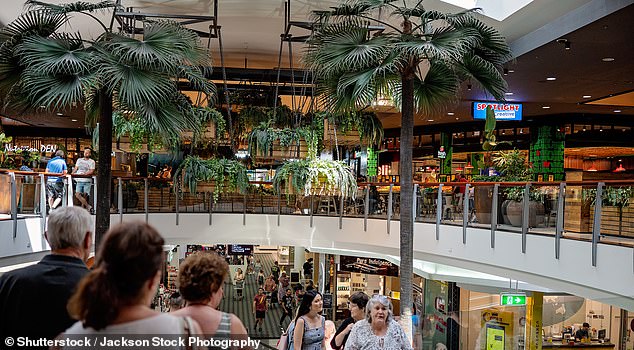 Anyone who has been to the following venues in the specified time frames must get tested regardless of whether they have symptoms and isolate immediately until they receive a negative result:

March 20, 12 noon to 2.16pm: every part of Westfield Carindale Shopping Centre at the alert time is now HIGH RISK

March 20, 12 noon to 2.16pm: Other parts of Westfield Carindale centre 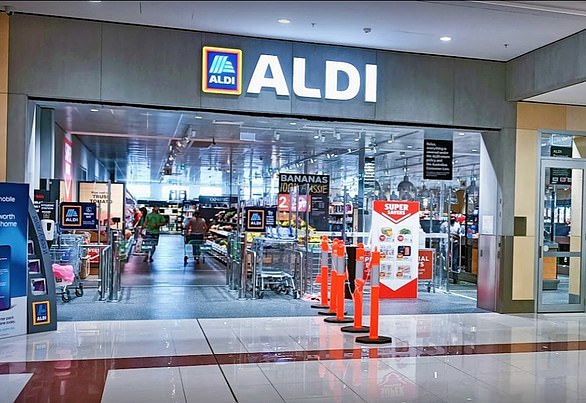 The 26-year-old returned two positive results after being tested for the virus earlier on Thursday.

‘We will be issuing health alerts throughout the day and I urge the media to really put out these venues,’ she said.

‘We absolutely want people, especially over the next two – three days, to come forward and get tested if you are feeling unwell and you have symptoms.’

‘He became reasonably unwell, and stayed home,’ she said.

She raised the possibility the case was connected to an outbreak involving two hotel quarantine guests and a doctor at Brisbane’s Princess Alexandra Hospital earlier this month. 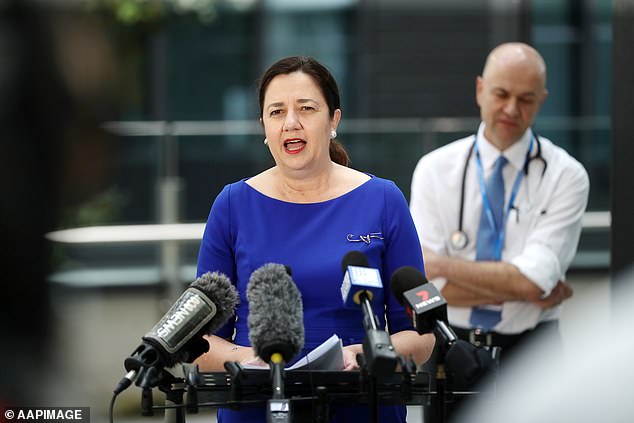 That outbreak also led to a ban on visitors to hospitals in the greater Brisbane area and an order for those who visited high-risk locations to self-isolate.

Brisbane previously entered a hard three-day lockdown in January after a Brisbane quarantine hotel cleaner contracted the UK strain of the virus.

‘I would hope we don’t need to have more restrictions, but it just depends what unfolds over the next 24-48 hours,’ Dr Young said on Friday.

The state’s health authorities have also issued an urgent alert for 96 suburbs across Brisbane after coronavirus fragments were detected in sewage water. 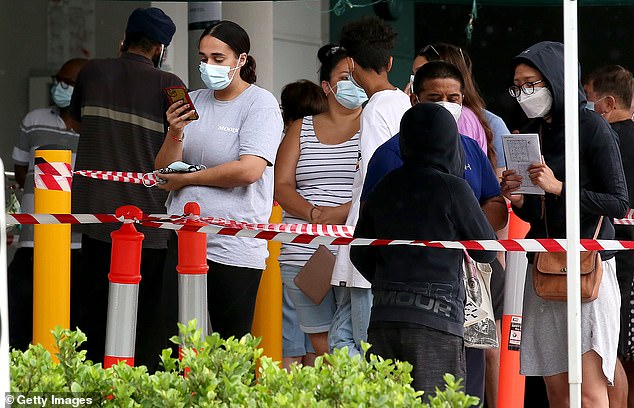 Residents line up outside a 24-hour COVID testing clinic south of Brisbane during the city’s three-day lockdown in January. Genomic testing is underway to uncover how a 26-year-old caught the virus in the latest outbreak

Covid-19 traces were also found in the Luggage Point treatment plant in the city’s east.

Dr Young urged anyone experiencing symptoms of the virus – however mild – to come forward for a test.

‘It is very important people with symptoms come forward right away and get tested – we can’t be complacent, we’re still in this pandemic,’ she said. 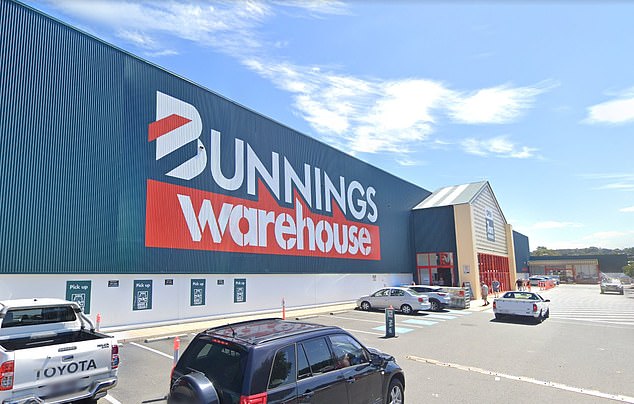 ‘It is critical we detect any cases that we may not be aware of as quickly as possible through our testing system, to contain any potential spread.

‘We are concerned by the new variants that are emerging overseas that are more contagious than previous variants we have seen in Queensland.

‘It’s also possible that this detection relates to previous COVID-19 cases that can shed viral fragments for a couple of months after they are no longer infectious.’

Sources in the Suez Canal: Efforts to float the delinquent ship were suspended and resumed on Saturday