Even when it comes to media interviews, Finn Russell does things off the cuff. No need for schedules, scripts or press officers telling him what to do. ‘When’s good?’ he says in a brief exchange. ‘I’ll give you a call in two minutes.’

Ninety seconds later, he is on the phone discussing the second wave of lockdown life at his home in Paris. His team, Racing 92, will play Exeter in next week’s Champions Cup final but their preparations have ground to a halt after an outbreak of COVID 19.

‘Everything shut down,’ he explains. ‘We found out a few boys had it, closed the training centre, took a few days off and were given training programmes to do at home. You just have to adapt and get on with it. I’ve got a watt bike and a few stretching bands… nothing too fancy. It keeps you ticking over for a few days and lifting weights isn’t really my style, anyway! 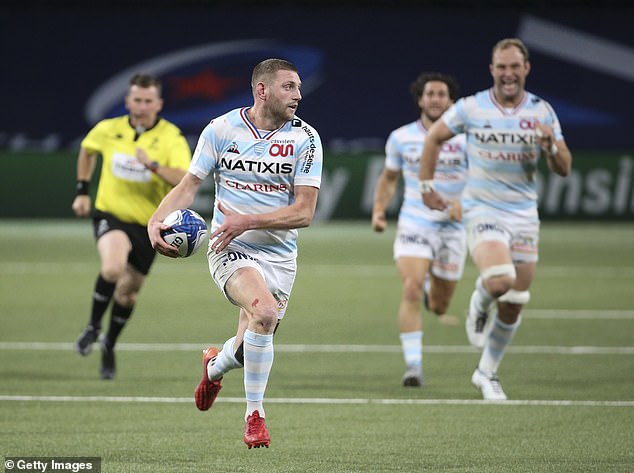 ‘We were back in on Monday for tests and everyone who came back negative has trained in groups of three or four. This morning, I started at 8, had some physio and was back home by 11.30. Gym, fitness, home. You’re only in for two and half hours. It’s basically what things were like at the start of lockdown. I suppose it was a bit of a surprise but it was probably going to happen at some point. Usually you get your results out through email but the boys who have it have been getting a phone call. The numbers came down in this week’s testing, which is a good sign.’

For the last few weeks, Russell has been hosting his sister, Jessie, who flew out to watch the semi-final victory over Saracens. It was a game in which Russell reasserted his credentials as the world’s in-form No 10. Rugby’s smiling assassin.

His moment of magic split open the game in the 76th minute, when he delicately chipped over the defence to set up the try that ended the Saracens dynasty.

‘Virimi Vakatawa called it, I kicked it, Virimi gets it and we score. Easy!’ he says with a chuckle. ‘We know our attacking kicking game works and it’s hard for teams to defend against. I’ll back myself to make that kick, no matter what time it is or what the scoreline is. 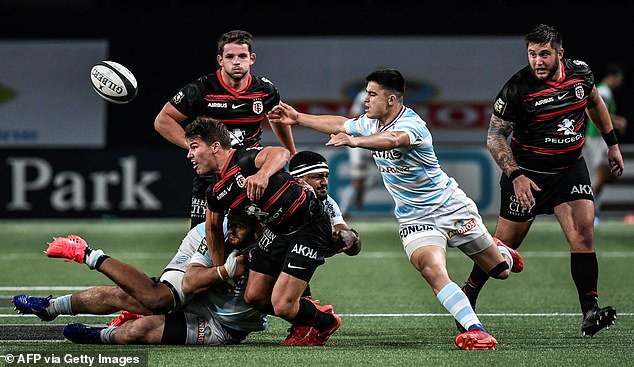 ‘The attacking kicking game is getting bigger and bigger. Dan Biggar tried a few crossfield kicks off the first phase against Exeter, so he’s maybe seen a weakness there. Maybe he was trying to change the picture of how Exeter defend into a picture that Northampton were looking for.’

‘I wouldn’t say there’s one individual I’ve idolised, but obviously Carlos Spencer was one of those guys who would use all sorts of skills and tricks to unlock defences,’ he adds. ‘He would try things and most time it would come off.’

Former All Black Joe Rokocoko recently labelled Russell as ‘The Scottish Carlos Spencer’. Scotland team-mate and Exeter full-back Stuart Hogg described him as ‘one of the most naturally gifted players he’s ever come across’. Hogg and Russell have spent the bulk of their careers together in Scotland and Glasgow jerseys – but Saturday’s final will be the first time since schoolboy days that they line up on opposite sides. 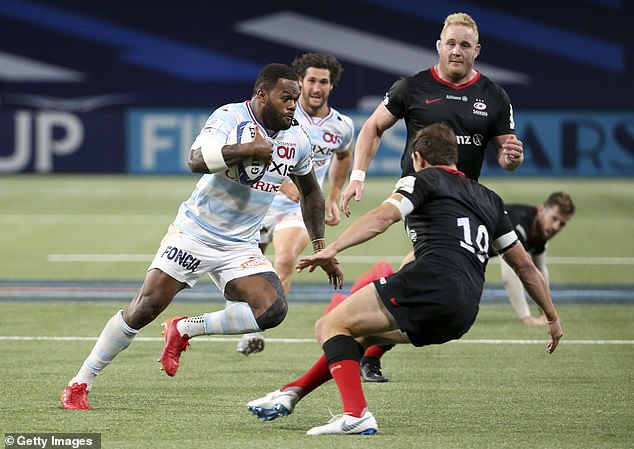 Hogg said: ‘It will be strange because other than playing Under-14s, I don’t think I’ve played against Finn. Back then he had a leopard print haircut.

‘He’s got the mentality that nothing fazes him. If he makes a mistake, he gets on with his next job… chucks a 30-yard pass out the back door and it will be perfect! You’ve just got to give this boy the license to play and let him have some freedom, because he’s got the ability to change a game with a chip kick, a dummy or putting boys through space. He’s a fantastic talent and I’m so happy he’s Scottish!’

Hogg and Russell are not the only Scotsmen to seek their fortune abroad. Lock Jonny Gray and scrum-half Sam Hidalgo Clyne also joined Exeter’s ranks and will be flying the Saltire flag at Ashton Gate on Saturday.

‘I’m going to give Jonny a call at some point,’ laughs Russell. ‘There’ll be a few bragging rights before we go back into Scotland camp. There’ll be a bit of chat going around for sure. Having players playing at this sort of level can only be good for Scottish rugby. In Scotland, there are only two pro teams. Scotland’s great but, speaking as a 10, it’s good to look at different ways of playing and work with different coaches.’ 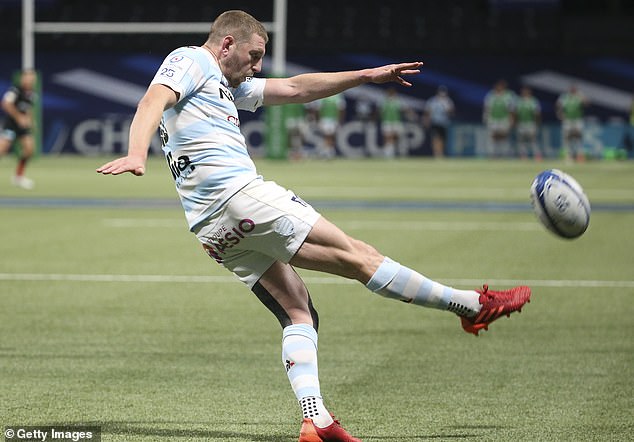 The decline of Russell’s relationship with Scotland coach Gregor Townsend has been well documented. The pair fell out at the start of this year’s Six Nations and, despite his unbounded club form, Russell has not played since. However, bridges are now being rebuilt and they will be reunited next month for the Autumn Nations Cup.

‘It’s a lot better now,’ he says. ‘I’m looking forward to getting back into camp. We’ve got a much better relationship so we’ll be able to chat to each other more openly and get our points across. You need that relationship between a 10 and an attack coach so you can have open discussions. It wasn’t different philosophies; we were just different guys who clashed. We’ve spoken a lot through lockdown and I think it’ll be different when we go back in. It should be good fun.’

Lions coach Warren Gatland will be keeping a close eye. Russell’s club performances alone warrant a call up for next summer’s tour of South Africa, however a return to the Test scene should only improve his chances. Russell was a late call-up for the 2017 tour. He was part of the infamous ‘Geography Six’, but this time around he has a case for starting in the No 10 in the famous red jersey. 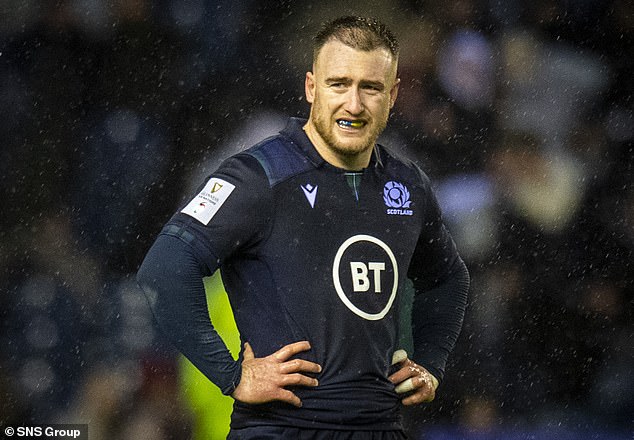 ‘I’d obviously love to get into the Lions properly from the start this time, but it’s a long way away,’ he says. ‘For me, I need to get back into it with Scotland first, then we can see what’s what. Any player in the UK will have a goal of getting on the Lions tour, but you can’t just set that as your main goal. You’ve got to play well at club and international level first. I’d love to go on a full tour and see what it’s like. It’s a goal but there’s a long process before that.’

First things first, there is the small matter of next weekend’s game. Racing’s preparations have been reduced to chaos but, true to form, Russell is unfazed.

‘Obviously it’s not an ideal way to prepare for a final, but it is what it is,’ he says. ‘It looks like we’re going to get into a hotel so we can get some full training days together. Minimise the risks by staying at a hotel near the training centre, then fly over on a chartered flight in the week.

‘You can get all the meetings on Zoom. We’ve been putting a few videos in the group chat but it’ll be much easier if we’re together in a hotel. This year, the teams that are going to be successful are the teams that will be able to adapt. You’ve got to be able to deal with the different scenarios you get put in. We’ll be fully prepared. I think our preparation will be fine.’

One thing is certain: Russell will take it all in his stride.