Radical preacher Anjem Choudary today protested his innocence after his ban on speaking in public was lifted following the end of licence conditions imposed after his release from prison.

The 54-year-old extremist was jailed five years ago after being convicted of inviting support for the Islamic State terror group, and left Belmarsh high-security jail in South East London on licence in 2018.

Choudary, who is from Ilford, East London, was freed automatically halfway through a five-and-a-half year sentence, and he held a press conference at a small park near his home this afternoon.

He told reporters: ‘I don’t agree about the law criminalising people for expressing their opinions. I don’t think a Muslim in the media with the profile I have could ever have a fair trial anyway in Britain.

‘The jury would inevitably be biased. The judges, the Crown Prosecution Service, the Police, none of them could really be fair. I am an innocent man, I believe I was a prisoner of faith. If not exonerated in this life. 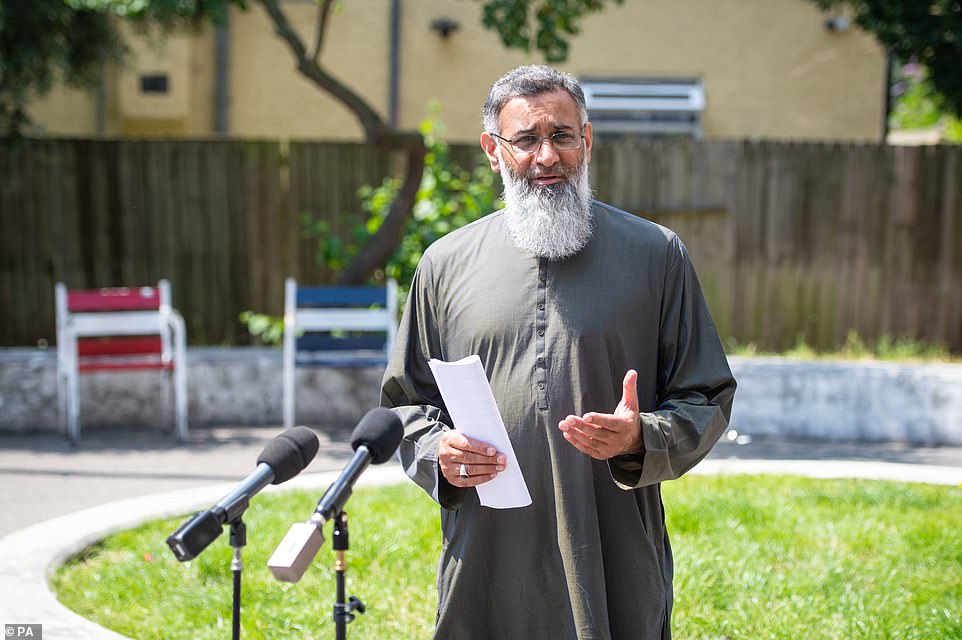 Radical preacher Anjem Choudary speaks to the media in Ilford, East London, today as he protests his innocence 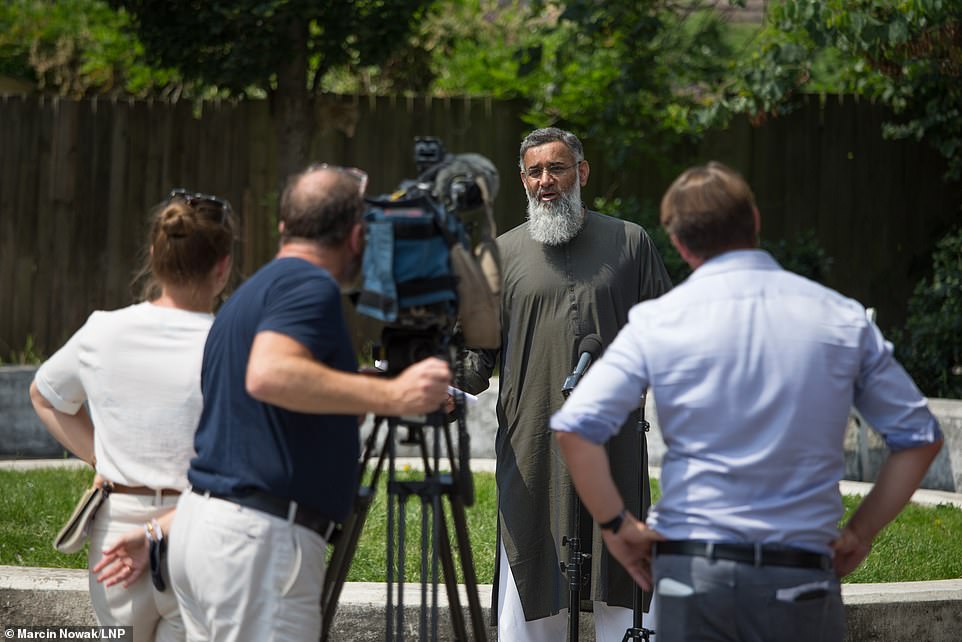 Choudary, 54, who is from Ilford, East London, spoke to members of the media this afternoon

‘I don’t believe I supported any prescribed organisation and I believe on top of that that if you live in a society where you have so-called freedom and democracy these things should never be criminalised anyway.’

A string of more than 20 strict licence conditions which Choudary has been subject to since his release expired yesterday, it is understood.

As well as being prohibited from speaking in public, his internet and mobile phone use was restricted and he was banned from being in contact with people who may be suspected of extremist-related offences without prior approval.

He had to wear an electronic tag and abide by a night-time curfew, only attend pre-approved mosques and stay within a set area, as well as adhere to other standard requirements, like having regular meetings with probation officers.

Choudary said today: ‘I don’t think I’ve ever incited violence’ and said he did not encourage people to join ISIS. He continued: ‘I don’t think I did anything wrong according to divine text. 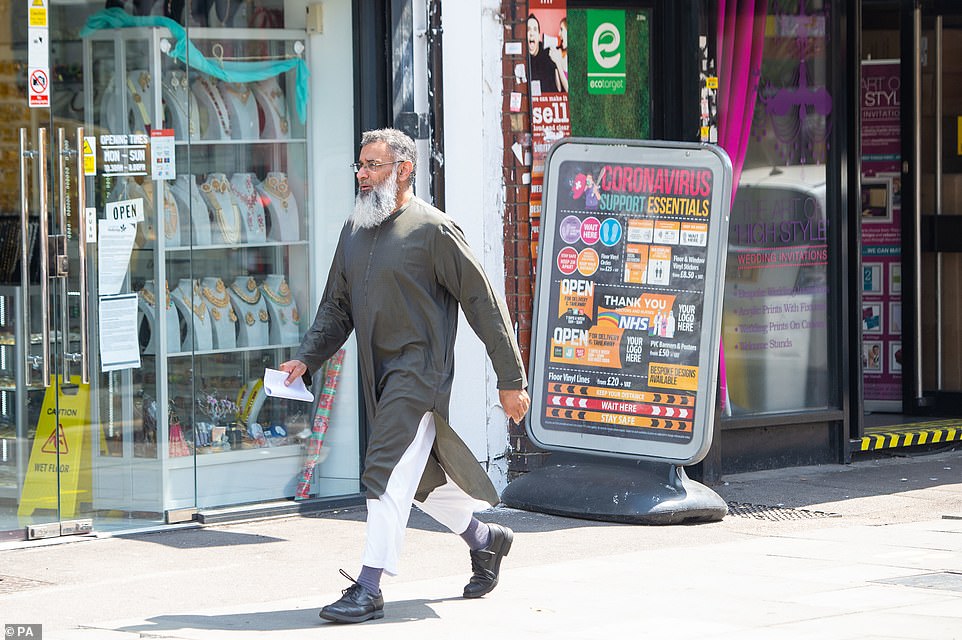 Radical preacher Anjem Choudary walks along the street in Ilford, where he held a press conference this afternoon 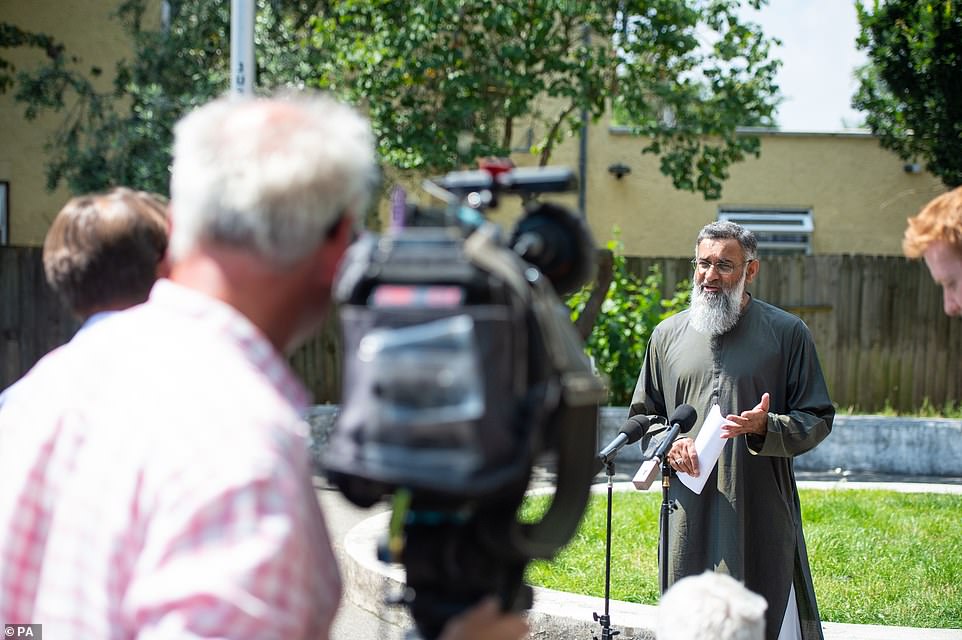 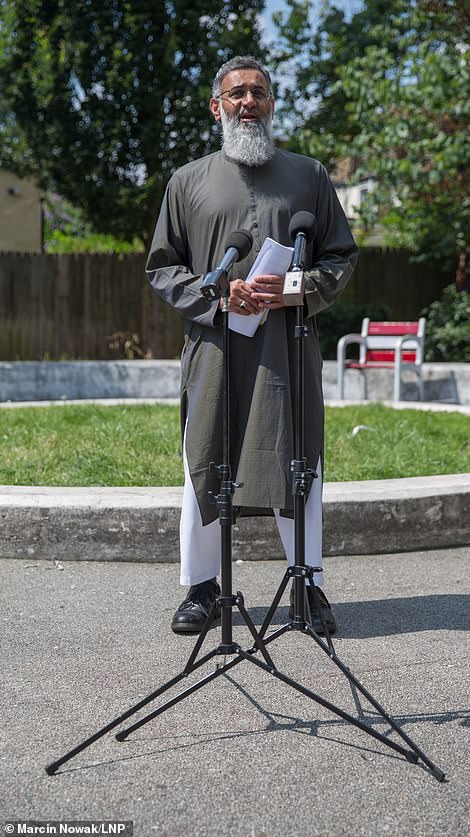 ‘You are already tried in the media before you come to the courts and therefore I don’t believe that someone like me can ever have a fair trial. So don’t read too much into the fact that I’ve been convicted on this fact or that fact.’

He added: ‘I don’t think I ever praised anybody who carried out any attack.’

When asked about what he would do now, he confirmed he did not have plans to speak publicly, adding: ‘I’m a family man, I have children so I’m going to go on and, inshallah, exercise some of my freedom with my children, maybe go some places I couldn’t before. I’m just going to get used to my freedom.’

Police and MI5 were thought to be among a host of bodies involved in monitoring him under the system known as multi-agency public protection arrangements (Mappa).

Separate measures saw his name added to a UN sanctions list, which meant he was banned from travelling and had assets frozen.

Once a leading figure in the now-banned group al-Muhajiroun (ALM), the former solicitor had previously stayed on the right side of the law for years – despite being seen as a radicalising influence.

From the 1990s, the father-of-five was a prominent figure in ALM, which also operated under a number of other names.

Over 20 years he voiced controversial views on Sharia law while building up a following of thousands through social media, demonstrations and lectures around the world.

While there has been no suggestion Choudary organised any attacks, others previously linked to ALM include Michael Adebolajo, one of the murderers of Fusilier Lee Rigby, and Khuram Butt, the ringleader of the London Bridge terror attack. 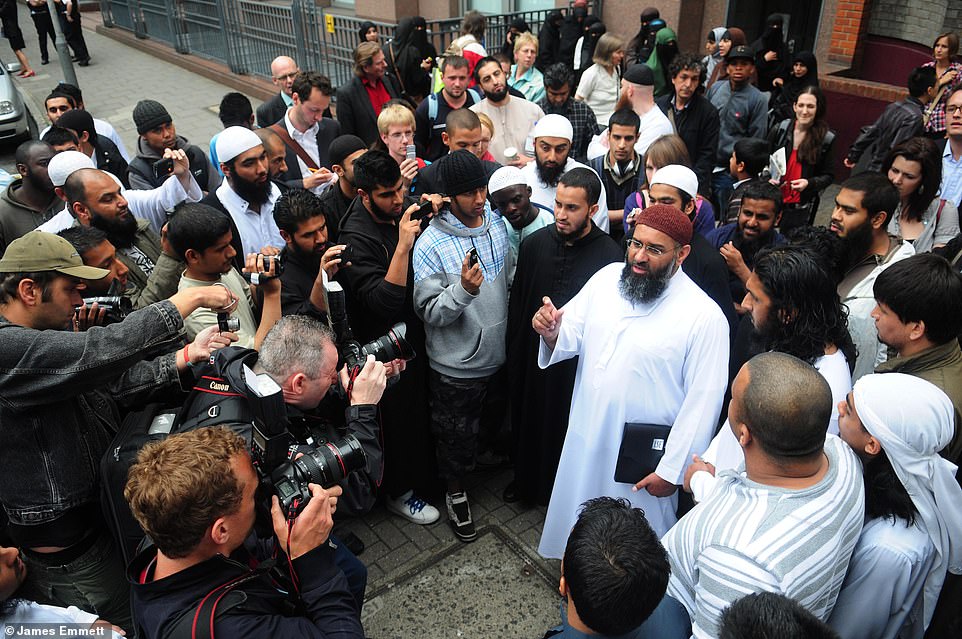 Anjem Choudary (centre, in white) speaks outside Conway Hall in London in June 2009

Muslim convert Lewis Ludlow, who plotted a terror attack on Oxford Street, attended a demonstration led by Choudary and the ALM group.

But former head of counter-terror policing Mark Rowley previously said Choudary was not ‘some sort of evil genius’, dismissing him as a ‘pathetic groomer’ during an interview with BBC Radio 4’s Today programme.

‘I think we have to be careful not to overstate his significance,’ he added.

Whether counter-terror police and MI5 will continue to track Choudary or consider him a person of interest has not been confirmed. But ALM is expected to remain of considerable interest. 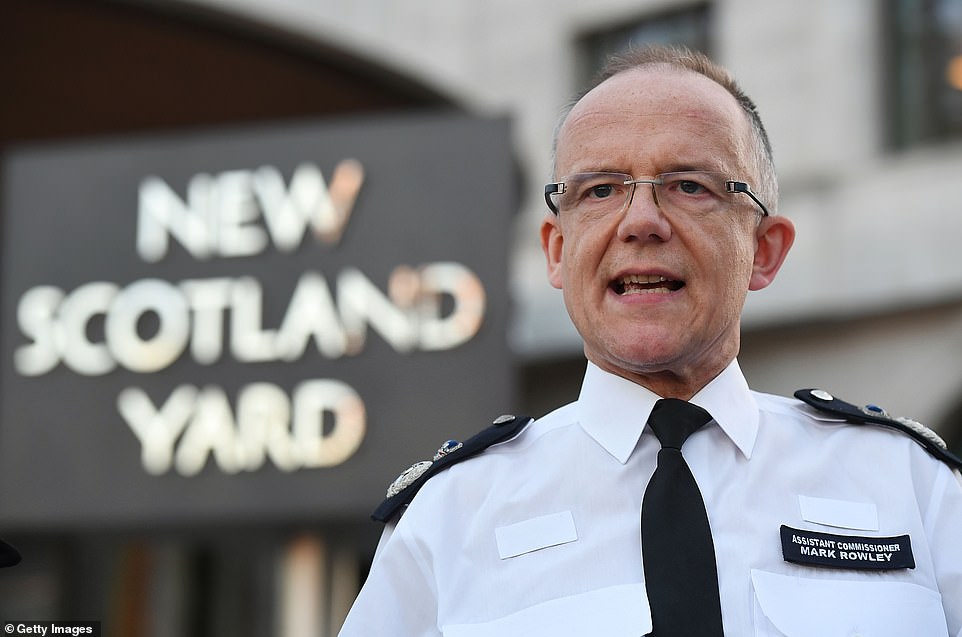 Former head of counter-terror policing Mark Rowley (pictured in 2018) previously said Choudary was not ‘some sort of evil genius’, dismissing him as a ‘pathetic groomer’

Other measures available to security services and police which could be considered in such instances are Tpims (Terrorism Prevention and Investigation Measures). They are seen as the strictest monitoring tool available to use against people suspected to be involved in terrorism or who present a threat, but cannot be prosecuted or deported.

A Tpim notice – which can be in place for up to two years – can involve conditions like an enforced curfew, tagging, having to stay away from certain locations and restrictions on overseas travel.

A senior security source said: ‘Disruptive measures – including jail terms and licence conditions – have had a substantial impact on the ability of ALM to propagate their toxic ideology.

‘While the group cynically preys on vulnerable individuals, its spokespeople have hidden behind their cult-like status while encouraging others to commit acts of violence. The group breeds on propaganda, and should be starved of the oxygen of publicity it relies on to spread hatred.’